Way Down Yonder I Baked a Paw Paw Cake 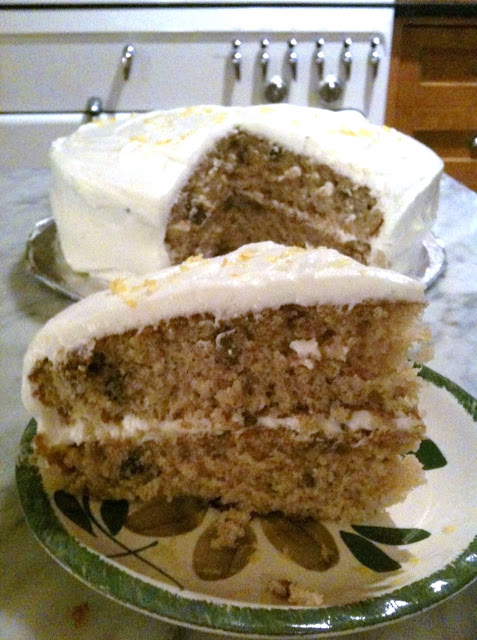 Paw Paws are one of the rare fruits that don't seem to be grown commercially; at least I've never seen them for sale.
So to get a paw paw, you need a connection.  This year, a co-worker who has a paw paw tree in her backyard brought in a bunch of these exceedingly ugly fruits and, while they are delicious eaten out of hand, I took some home and turned them into cake.

I couldn't find a recipe for paw paw anything in my collection, but thanks to Google, had my choice of many -- or so I thought. But the eight paw paws I brought home yielded only  1/2 cup of pulp and most recipes called for at least one cup and often three.

Paw paws are compared to bananas and mangoes and are quite fragrant, though by the time they're ripe they look like they belong in the compost heap.  They are also filled with big black seeds, making harvesting the pulp messy and challenging. Despite all of these obstacles, the flavor is divine and the cake was a big hit among family and colleagues. I was especially pleased when I brought a slice to my new best friend Julie Mihaly who knew exactly what paw paws were and even called her mother (who used to pick them) to reminisce. (Please check out Julie's fab online magazine: http://boomunderground.com/)

Like everyone else, I had heard of paw paws, but wasn't quite sure what they were. My only reference was the Appalachian folk tune (some abbreviated lyrics below) and DH's constant refrain to my questions, "Have you seen my (choose one) book, glasses, purse?" which was "Why don't you look in the paw paw patch?"

Pawpaw Cake i
Sift first four dry ingredients together. Combine milk and lemon juice and set aside to sour. Cream shortening, add sugar gradually, and beat until fluffy. Beat in eggs, one at a time. Add vanilla. Then add dry ingredients alternately with pawpaw puree and soured milk. Fold in the beaten egg whites and the chopped nuts. Pour into two lightly greased and floured 9-inch layer-cake pans. Bake in a moderate oven (350o F) 35 to 40 minutes. Frost with:
Lemon Butter Frosting
Cream the butter until fluffy, using an electric mixer. Blend in the lemon juice and a small amount of grated lemon rind. Add the confectioners’ sugar gradually along with enough cream to make a frosting of the right spreading consistency. Run the beaters long enough to make the frosting very fluffy. Garnish the top of the frosted cake with a grating of lemon rind.