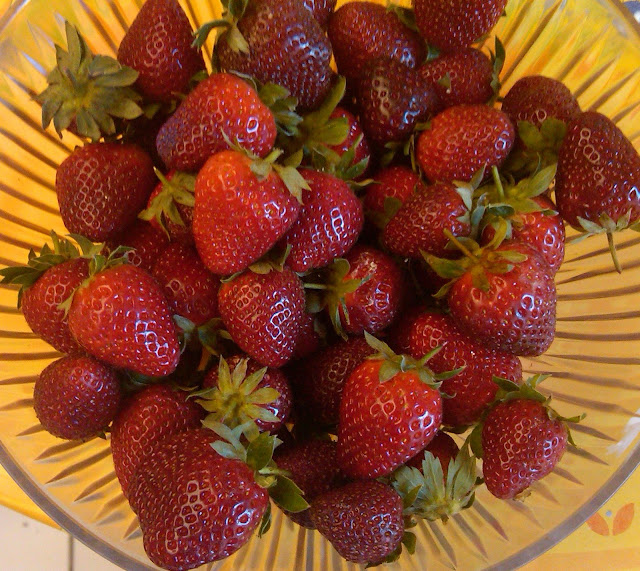 I thought I was dreaming when, on my way to the pharmacy, I discovered a farm behind a typical, dreary strip mall in south Florida, and suspended my disbelief as I picked luscious strawberries from the weirdest strawberry field I've ever seen. 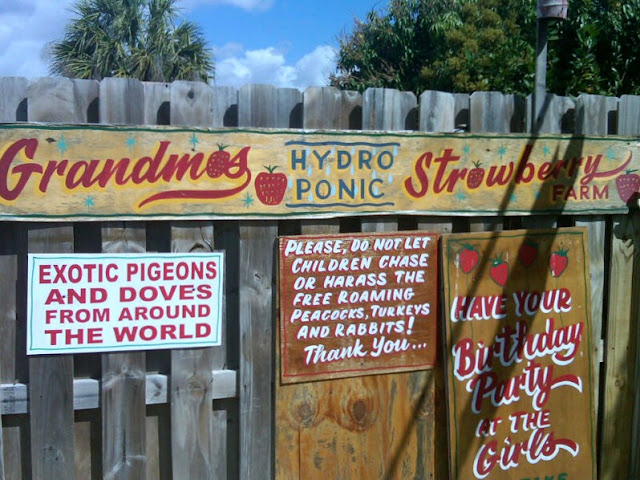 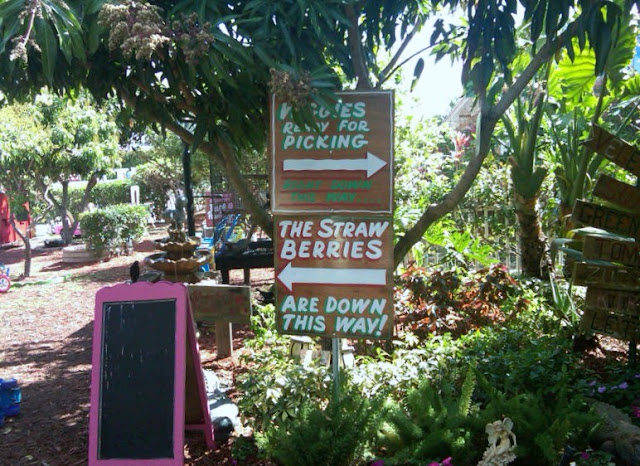 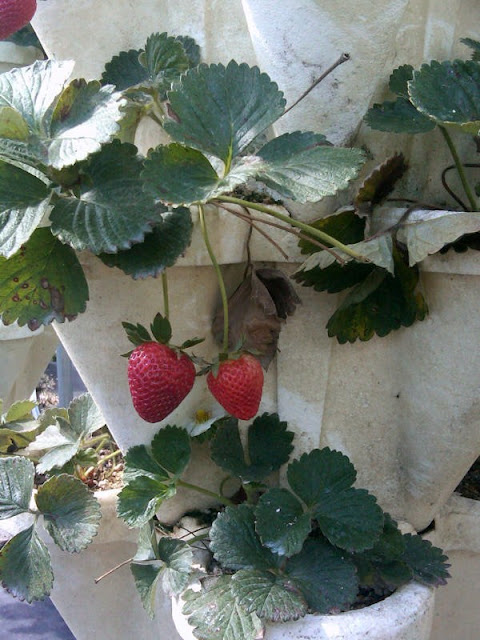 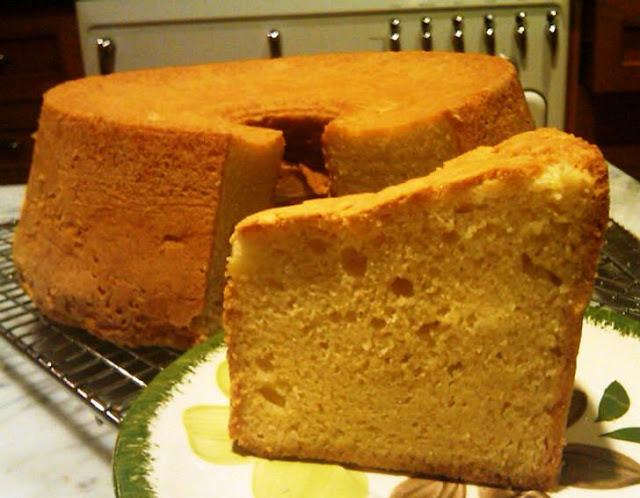 This is the ultimate pound cake.  It's absolutely delicious -- as it should be with its six eggs, meringue and one cup of sour cream thrown in for good measure.
The recipe, which is simple to follow, takes the traditional pound cake and ramps it up.  I have no idea who "Grandma" was -- this recipe card was in a box that DH gave me for Christmas.  But I know I would have liked to sit at her kitchen table after school, enjoying a piece of this cake warm from the oven.  This grandma really rocks. (And you can too, at any age, just by making this!) 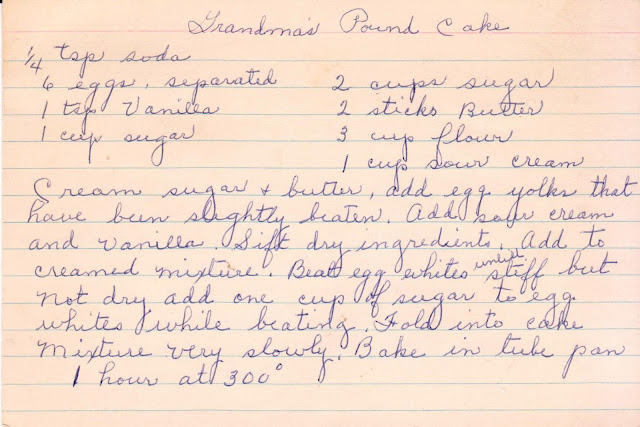 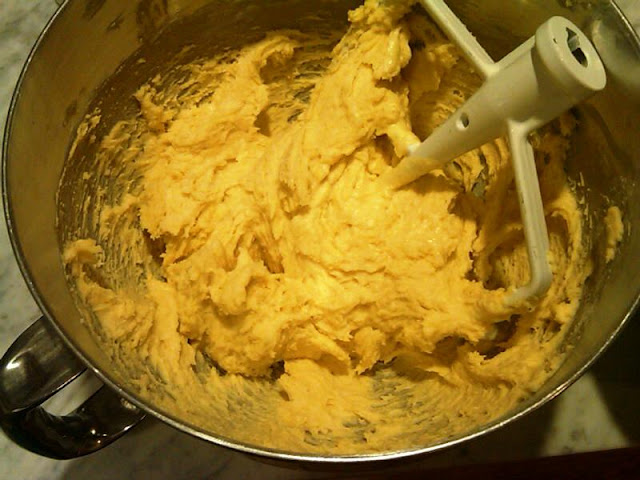 Mixing up the batter is simple and straightforward.  Then the fun begins -- making meringue and folding it into the original batter.  The photo essay below explains the process.

Who Said Fruit Tarts Were Light? 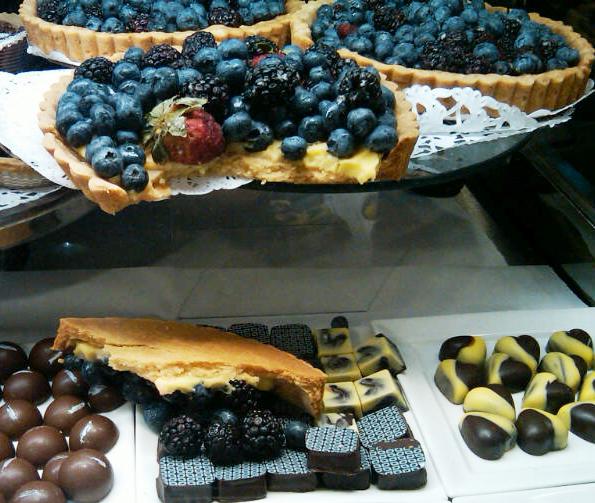 Taking a quick baking break to report on a pastry tragedy I spotted this evening at Park Slope's Union Market on Seventh Avenue.

The blog post's brilliant title is courtesy of my neighbor Elizabeth who cleverly asked that question when I showed her trauma in the dessert case.

I don't know what became of the tart and all those chocolates on the shelf below; the guy in line behind me thought they should have given them to me for alerting them to the disaster, but I'm hoping that the store's hard working staff got to enjoy the sweet remains.
Posted by Susan at 10:56 PM 2 comments: 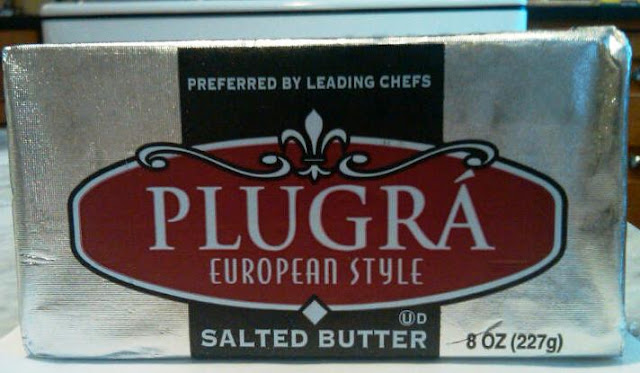 It used to be that I had to search far and wide for Plugra, the  European-style high-fat butter I favor in my baked goods. So imagine my surprise on Saturday when DH, in New Jersey to visit his mother, discovered my favorite butter in a suburban K-Mart!

Unfortunately, he bought salted butter -- lovely on bread or melted in a sauce -- but not ideal for baking. That's because most baked good recipes contain salt as an ingredient (usually a teaspoon or so) and if one uses salted butter, it ups the final salt amount in the finished product.  (If you Google this, you can figure out ways to compensate for salted butter, but why add an extra step?)

So remember (DH, are you listening?) always buy SWEET, unsalted butter for your baking needs.  It's just one more way to guarantee delicious success.
Posted by Susan at 12:36 PM 6 comments: 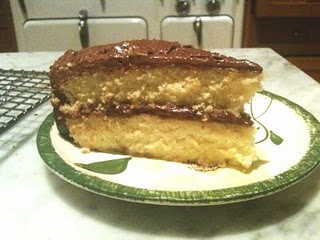 Read all about it!

http://parkslope.patch.com/articles/history-through-baking
Posted by Susan at 11:18 PM No comments:

Breaking news on the blog front today!  My red velvet cake took first prize in the red velvet cake contest held today at The Red Show at the Brooklyn Historical Society!  The contest is part of The Red Show, organized by NYCreates, a non-profit organization of artisans.  You can visit the show today and tomorrow.

My cake took the prize for "best non-professional baker" and, shockingly, beat out all other cakes (including some from extraordinary bakeries) and was named "best in Brooklyn!"

And here's the best news.  You, too, can bake this cake; just click here for the recipe.

A special shout-out to DH who showed up at the contest, camera in hand, to document the event.  He was so determined to get there that he even broke one of his cardinal rules and parked in a garage (after giving up on finding a meter in Brooklyn Heights).  Worth it, I say, because his pictures are great!
Posted by Susan at 2:01 PM 8 comments:

It's My Birthday and I'll Bake if I Want To! 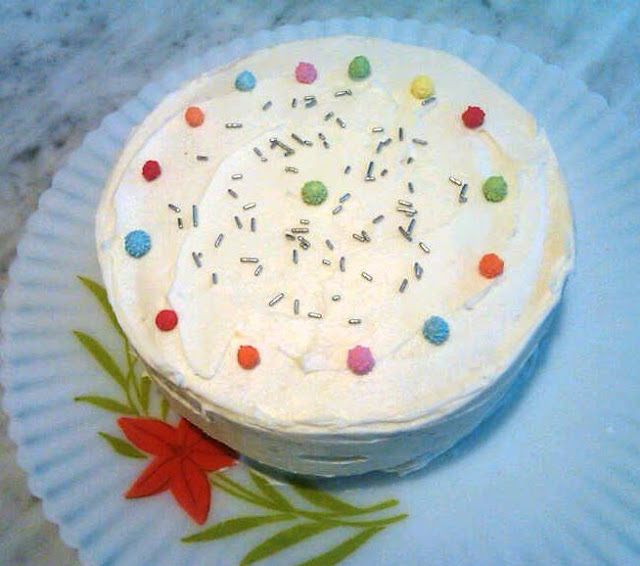 Nothing like a southern Dixie White Cake to bring some warmth on a cold February day.  And what better way to spend my birthday morning than baking a new cake. 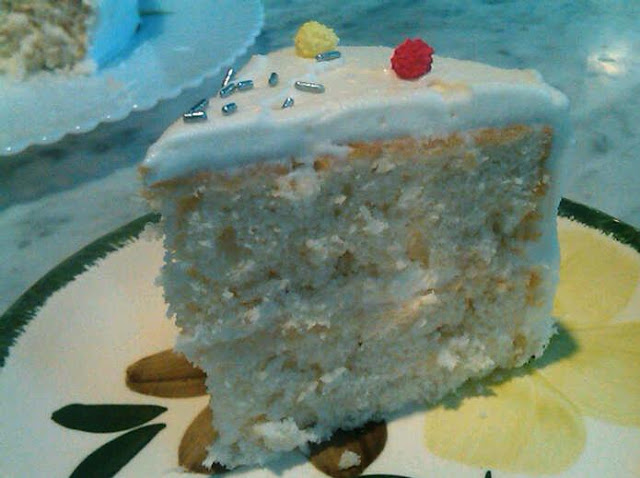 I only had a few minutes, so I whipped up this darling and extra-delicious (thanks to the coconut) six-inch cake.  It's from the same recipe box where I had a lot of failures, so the success of this gem is a surprising gift. 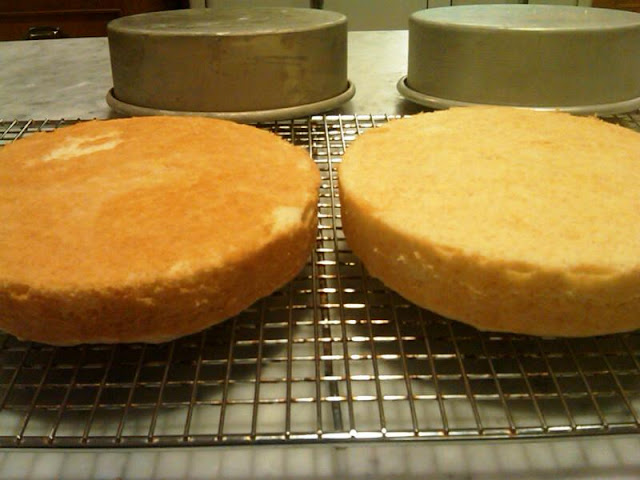 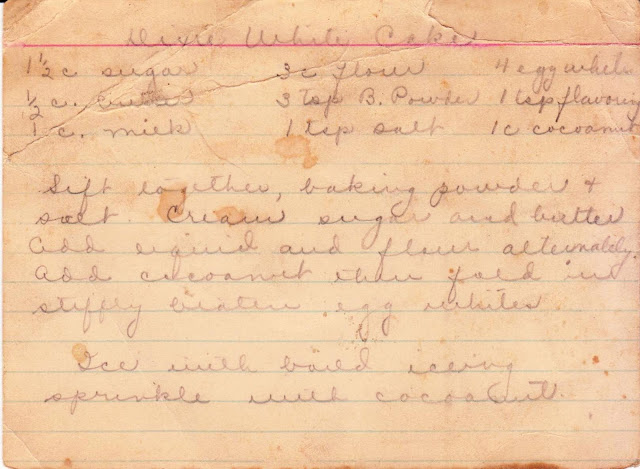 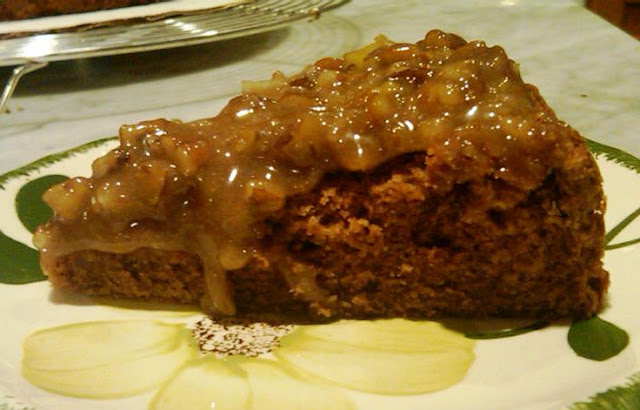 On Saturday, I got my dream recipe box (thanks, eBay), packed with over 200 hand-written recipe cards, all for desserts dating from the 1930s onward, from an estate in Portland, Oregon.  But after examining the cards, there were surprisingly few that I wanted to make, partly because most are simply a list of ingredients (no instructions) and some of the ingredients are unclear (like "caramel"). 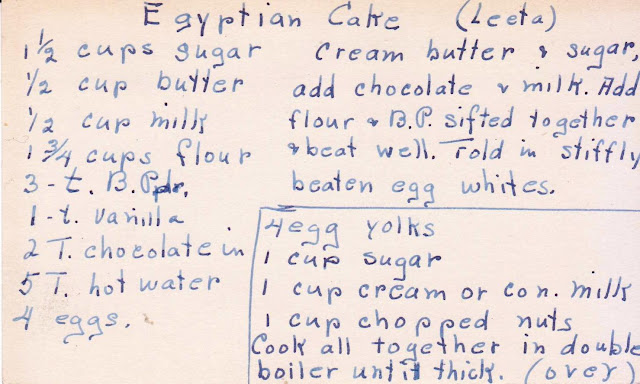 One exception was Egyptian Cake.  Perhaps because of its exotic origin, this recipe (given to the homemaker by "Leeta") contained fairly precise instructions.  So last night, listening to the news of the Egyptian uprising on NPR, I baked this cake. 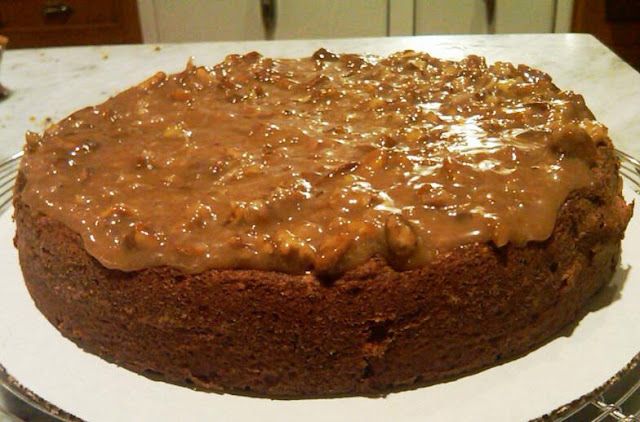 It's a basic chocolate cake, containing only egg whites (the yolks are used in the frosting -- a waste-not-want-not hallmark of the 1930s).  It has a nice, soft crumb and delicate flavor.  The frosting is very similar to that used on German chocolate cake, except one uses either nuts or coconut.  What's Egyptian about this cake, I have yet to discover.  Perhaps I need to have another slice. 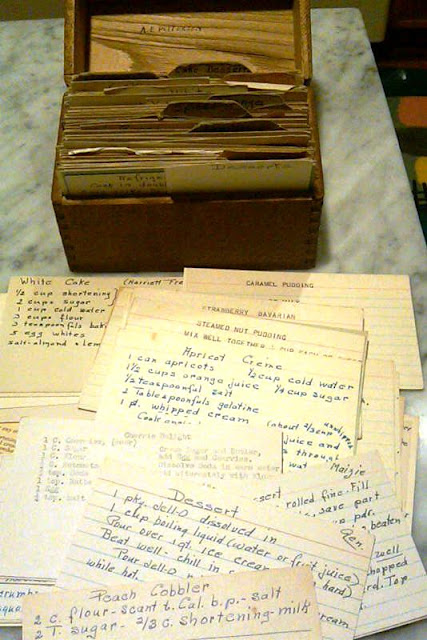 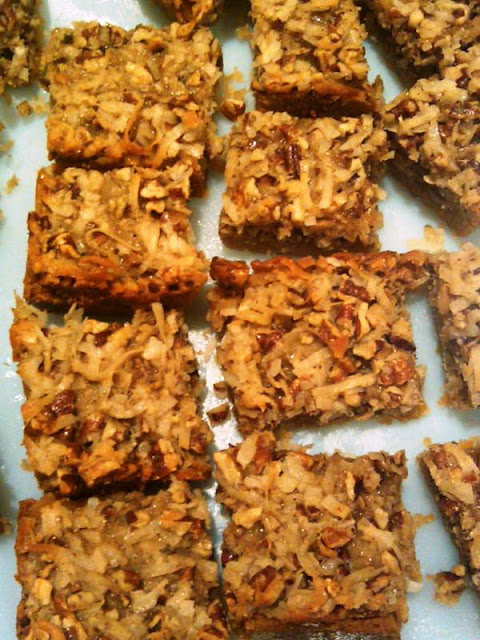 These bar cookies are every bit as addicting as a really great football game, so why not make them for the Super Bowl?
They're easy to make and even easier to eat.  In fact, when DH brought them to work one day, a colleague took one, came back for another and later instead of exiting the building after taking the elevator down five flights, turned around and rode another car up to get a third.
Like all recipes, one must pay close attention to this one.  I didn't and paid for it. Instead of making the bottom layer with brown sugar, I used white.  The result was so bad that even I couldn't eat this mistake.
When I was young, my mother sometimes made something called Seven Layer Bars, in which chocolate chips, butterscotch chips, nuts, coconut and more were layered atop a graham cracker crust, with sweetened condensed milk poured over the whole thing.  And then baked, of course.  They lasted about an hour, they were so good.
The recipe for Coconut Butterscotch Squares is probably a precursor to that one.  It's most likely from the 1940s, and incorporates more traditional baking techniques, like using eggs as a binder.  Desserts of that era were a simpler by necessity, for ingredients like butterscotch chips didn't exist and anyway our American palates hadn't been introduced to the over-the-top desserts typical of the past 20 years.
So enjoy these 1940s treats at the 2011 Super Bowl, which is akin to one of my favorite things: watching a black & white movie on the TCM channel while flying on Jet Blue. 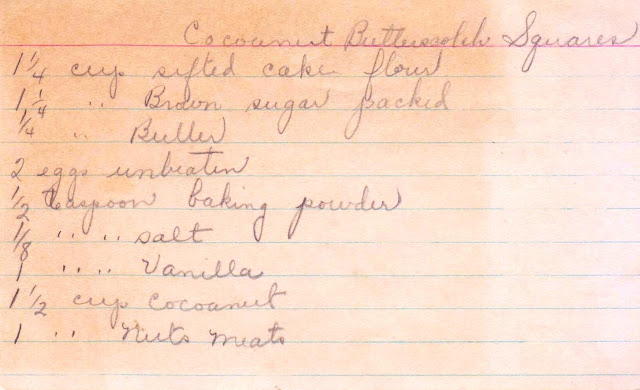 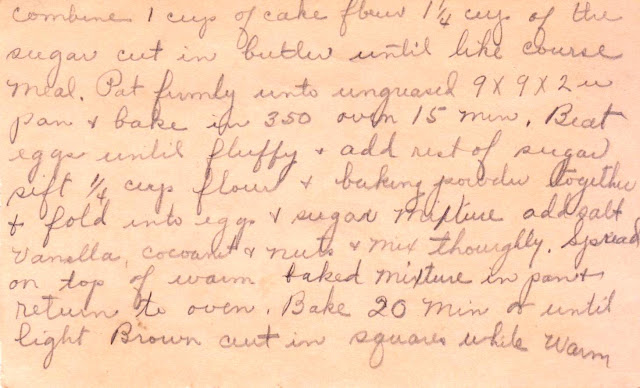 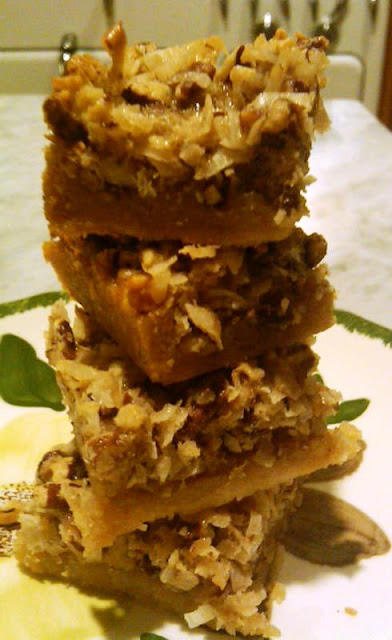 Is Pie the New Black? 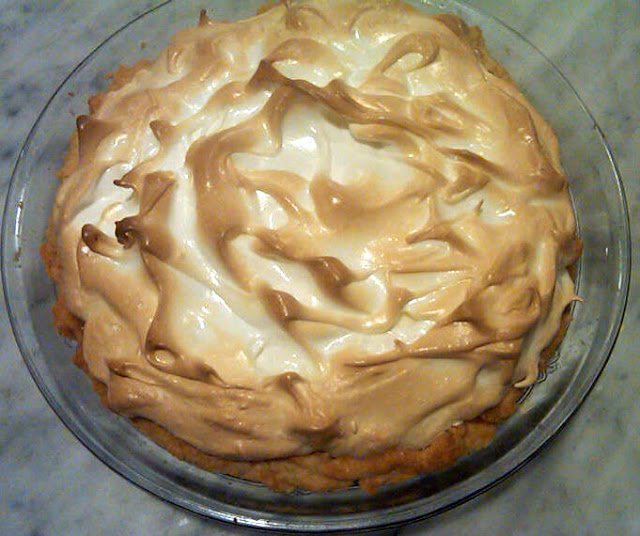 I've been reading a lot about pie lately, how its popularity is soaring. A lovely new bakery, specializing in pies (appropriately named Four & Twenty Blackbirds) opened not far from my house.  And there was even a pie contest last month in  hipsterville Brooklyn, aka Williamburg, and *only* the first 50 pies would be judged.  Who knew that there are so many pie bakers that the contest needed to be limited to 50.  (I also can't believe that so many people want to run the NYC Marathon that tickets need to be won in a lottery, but that's another story.)

I couldn't enter the pie contest because I was working that Sunday, but I did decide to try my hand at lemon meringue pie. (The winning pie was a Shaker lemon pie.)  I made it twice in the past few days.  The first was gorgeous, but a failure as the filling never quite set, so we all *enjoyed* meringue-topped lemon soup.  The second pie was much better, but I overbeat the egg whites rendering the meringue a bit tough.  Plus, I had a fight with my pie crust and in retaliation, it shrunk in the pie pan. 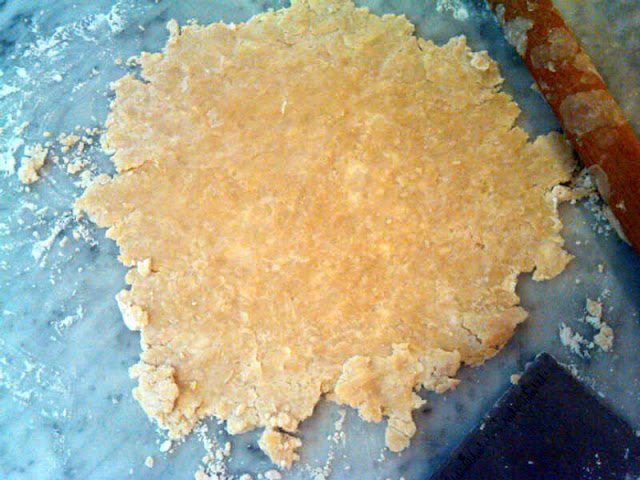 I'm posting the second recipe I used, which was far superior.  The filling was easier to make and was smooth and custard-y.  Ironically, the pie soup recipe was published in a c. 1955 cookbook (where recipes, often subject to testing, are usually more reliable) but the successful one was hand-written in a composition book belonging to Ida Mai Van, a cooking school student in 1935. 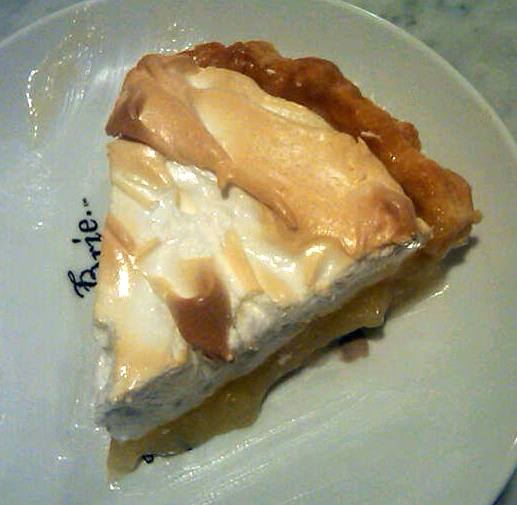 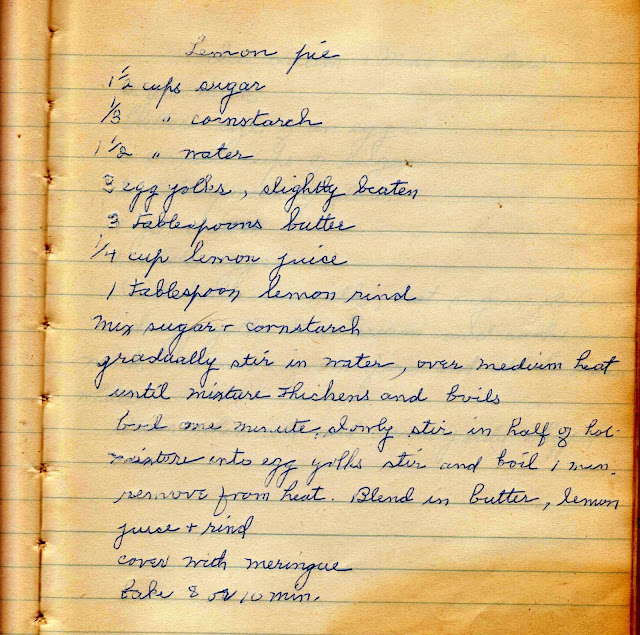