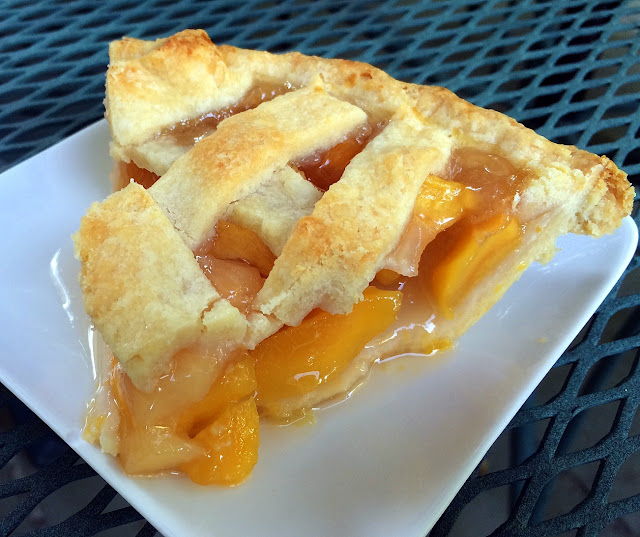 As some of you may have noticed, I've been somewhat AWOL from posting of late, but it's not for lack of baking, but rather for lack of time. Let's just say that the mild envy I once felt seeing people enjoying a leisurely mid-morning latte in a cafe or attending a yoga class at 2 p.m. is approaching full-on resentment. But if I didn't have my day job, I never would have met Josephine Lume, the lovely and uber talented CFO of Henry Street Settlement (where she plays a mean calculator!) who gifted me with these peaches from her father's tree, pictured below. (I'm convinced her father, a native of Italy, lives in an orchard in Queens, where he grows persimmons, figs, blackberries and, of course, peaches.) 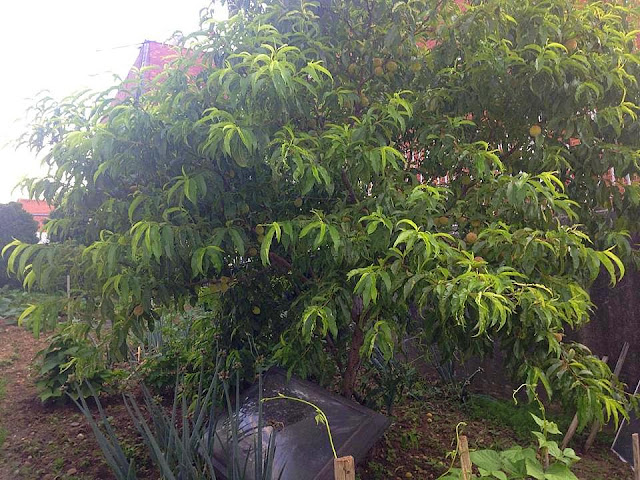 About those peaches. They are certainly not "pretty as a peach" but what they lack in appearance is made up in juicy deliciousness. 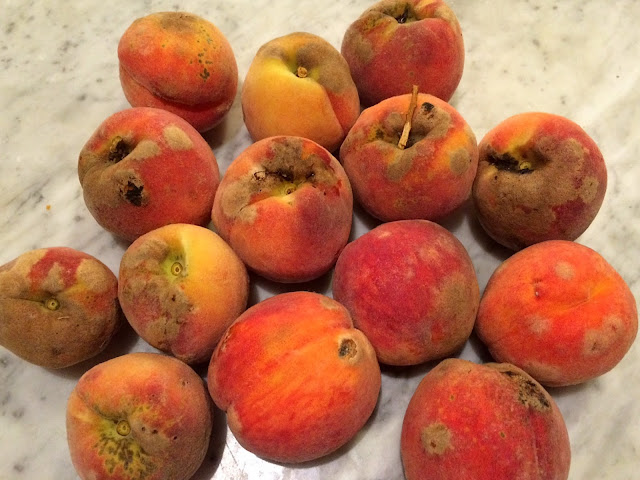 For a fresh peach pie, boil the peaches for about 60 seconds and, if you're lucky, the skins will slip right off. If not take a paring knife to peel them before slicing. 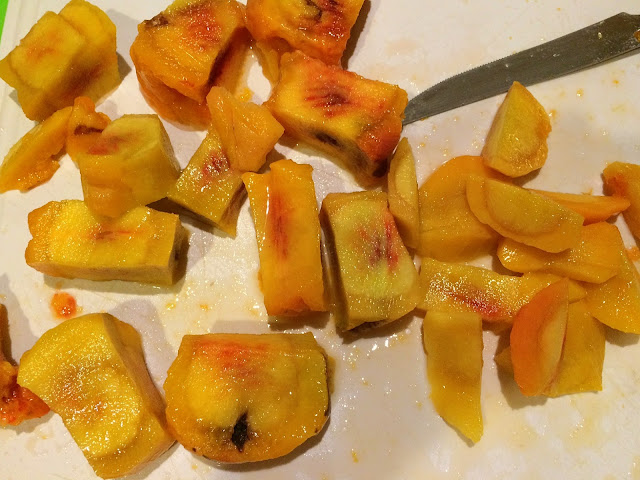 Next, combine the sugar, cornstarch and salt.  Add water and stir until combined. Slip the peach slices in and cook until the mixture boils. Then cook another minute. 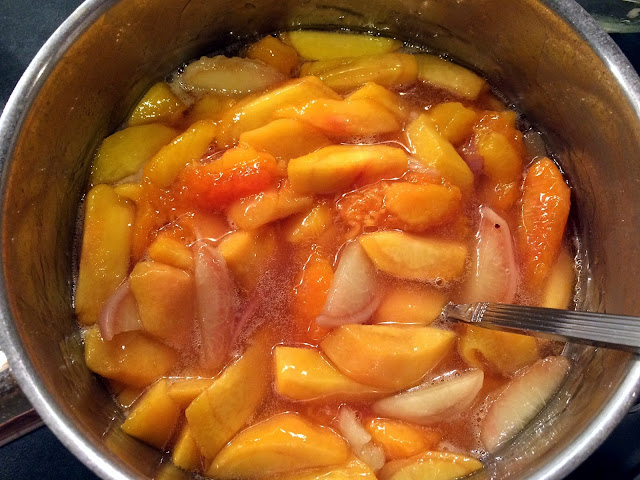 Pour the mixture into an unbaked pie shell.  You can see below I had too much liquid, so I simply spooned some out. 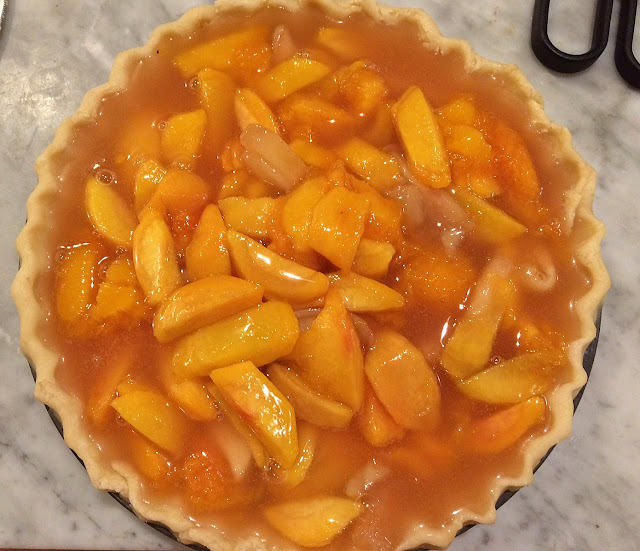 Cover with a top crust. I got a little fancy with a lattice. 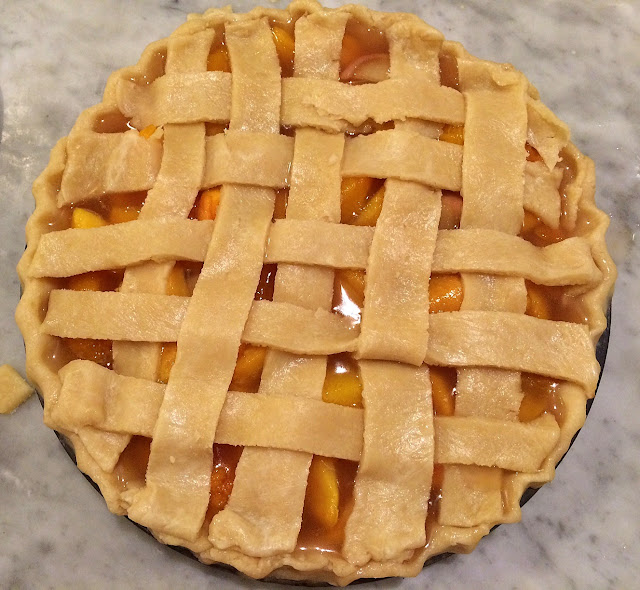 Bake until done. Cool on a rack. 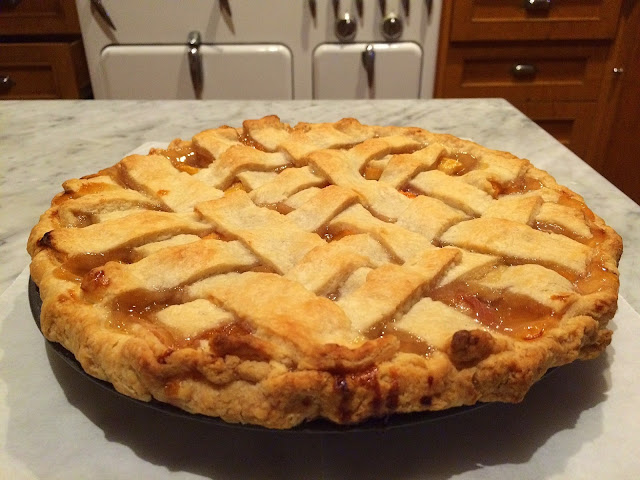 Enjoy in the garden, even if it lacks a peach tree. 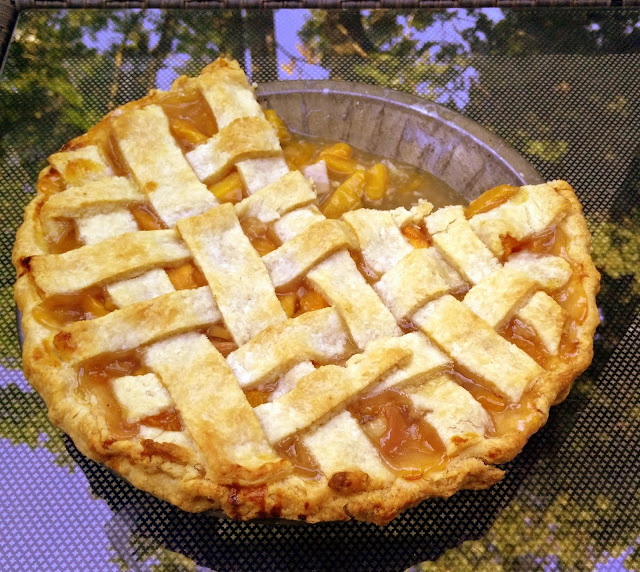 This recipe is from a c. 1960 cookbook published by The Women of Circle "B" of the First Brethren Church in Ohio.

Production notes: I followed this recipe exactly, but had to spoon out some liquid. Next time, I would leave some in the saucepan. I used a nine-inch pie pan and five cups of peaches. Always bake pies on a foil-lined baking sheet for ease of removal from the oven, and also to prevent the bubbling juices from spilling onto the oven floor. 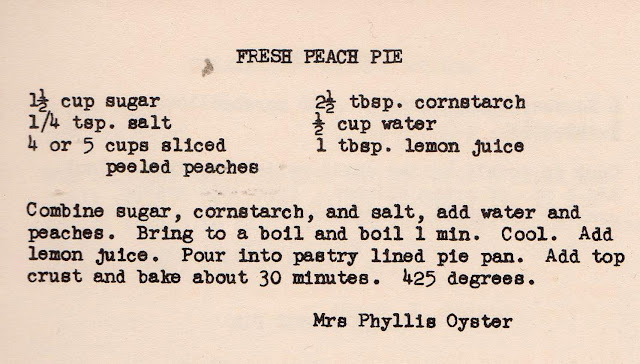 2 1/2 c. all-purpose flour
1 stick of cold butter, cut into small pieces
6 T. cold Crisco, cut into pieces
2 t. sugar
1 t. salt
3 - 6 T. cold water
Place dry ingredients in a food processor and whirl to blend.  Add butter and Crisco and process until it resembles cornmeal. Transfer to a round bowl, and add the water, a couple of tablespoons at a time.  Blend with a fork.  When it holds together, transfer to a lightly floured surface and form a large ball.  Divide in half and either roll out between two sheets of plastic wrap, or refrigerate until it's a bit firmer and then roll out.
Posted by Susan at 9:04 AM 3 comments: