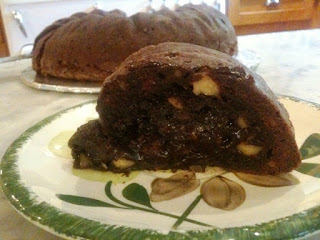 Tunnel of Fudge is a cake that Betty Draper might make, if Mad Men continues (fingers crossed) for a few more seasons.

This unusual cake -- yes, there really is a tunnel of fudge running through its center -- was the creation of Ella Rita Helfrich who won second prize in the 1966 Pillsbury Bake-Off.  (For her efforts, she received $5,000; the first place winner took home $25,000 for a bread made with cheese spread and onion soup mix.)

For a second place winner 44 years ago, this cake has legs.  First, it popularized (or saved from extinction) the bundt pan, which was only rarely used at the time.  (Its legacy is enduring; many remember the small, yet pivotal role the "cake with a hole in it" played in the film, My Big Fat Greek Wedding.)  Pillsbury reported that it received 200,000 calls from home bakers looking for bundt pans following the 1966 contest. 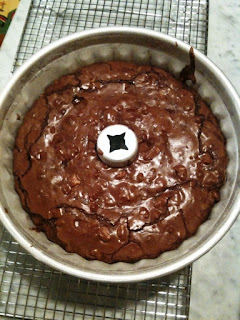 When Pillsbury discontinued making the packaged frosting mix called for in the original recipe, there was such an uproar that the company went back to the drawing board (read: test kitchen) and developed a completely scratch recipe.  That's the one I used, and pasted below.

Was it good?  Yes, though it seemed more like a brownie than a cake, not that there's anything wrong with that! The brownie reference may be due to the two cups of walnuts in the recipe. One is instructed not to skimp on the nuts, as they are considered critical to the formation of the gooey center.  Most experts in the chemistry of baking attribute the tunnel creation to the excessive amount of sugar in the recipe. 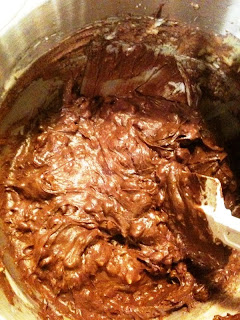 DH, who brought some cake to work, wrote the following email to colleagues:
For those who like my wife’s baked goods….
I have with me the most extreme chocolate cake I’ve ever tasted – the unfortunately named ‘tunnel of fudge’ cake – that I’m going to put out at 2:45 in the 5th floor bullpen. Be forewarned – it can put you into a diabetic coma!! And must be cut with a gallon of coffee….I only had one bite and gave up….
This is why I was at yoga and spinning at 7 a.m. twice this week…..
For those who want a diabetic coma of their own, may I present the Tunnel of Fudge recipe.
Cake:
3 1/2 sticks butter softened
2 1/4 cups all-purpose flour
1 3/4 cups granulated sugar
6 large eggs
2 cups confectioners' sugar
3/4 cup unsweetened cocoa powder
2 cups chopped walnuts
Glaze:
3/4 cup confectioners' sugar
1/4 cup cocoa powder
1 1/2 to 2 tablespoons milk
1.     Heat the oven to 350°F (175°C). Grease a 12-cup Bundt pan or 10-inch angel cake pan. Dust with flour and tap out the excess.
2.     In a large bowl, beat the butter and granulated sugar using an electric mixer on medium speed until light and fluffy, for 1 to 2 minutes. Add the eggs, one at a time, beating well after each addition.
3.     Gradually add 2 cups confectioners' sugar, beating until well-blended. By hand, stir in 21/4 cups flour, 3/4 cup cocoa and the nuts; mix until well-blended. Spoon the batter into the prepared pan and spread evenly.
4.     Bake for 58 to 62 minutes. (Because this cake has a soft tunnel of fudge, an ordinary doneness test cannot be used. Accurate oven temperature and baking time are critical.)
5.     Let the cake cool upright in the pan on a rack for 1 hour, then invert onto a serving plate and let cool completely.
6.     To make the glaze: In a small bowl, combine 3/4 cup confectioners' sugar, 1/4 cup cocoa and 1 1/2 tablespoons milk. Mix until well blended, adding the remaining 1/2 tablespoon milk to make a spooning consistency.
Posted by Susan at 11:35 PM