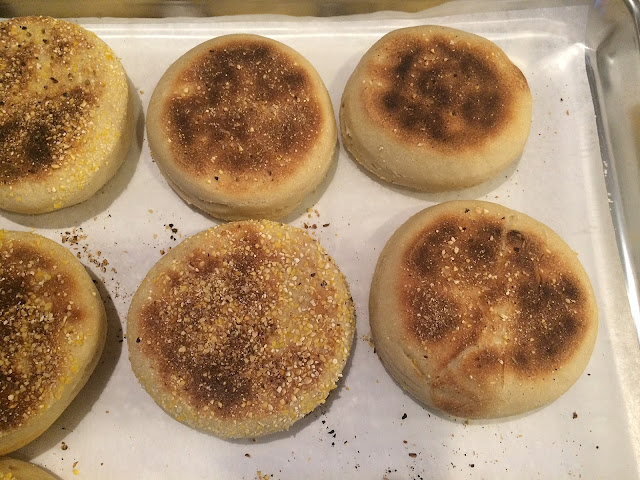 Like many other New Yorkers during yesterday's Snowzilla, I hunkered down, binge watched television (Mozart in the Jungle, at my house), and generally enjoyed the enforced "do nothing" gift of the blizzard.  But I couldn't stay away from the kitchen, and so when the DH said he'd like an English muffin, I pulled out the flour bin, opened a yeast packet, and got to work. (The toaster part would come much later; thank goodness he's the patient sort.)

This vintage recipe for English muffins, from a collection of a 1940s Wisconsin housewife, was quite successful. Homemade English muffins are very easy to make and way better than the store bought variety. You don't even need an oven -- these are "baked" in a skillet on the stove top! 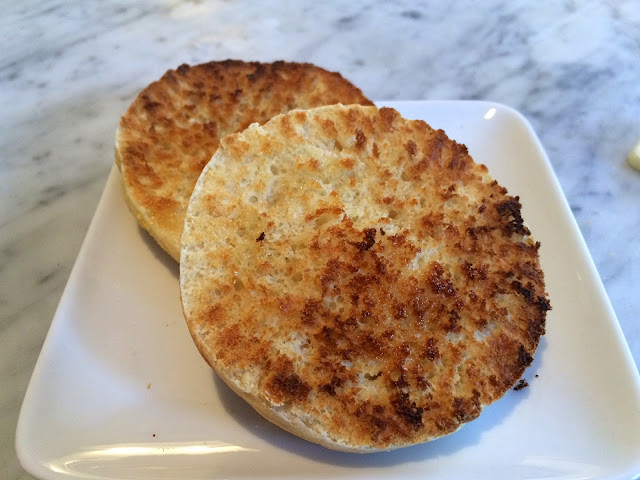 To begin, scald milk and add butter, salt and sugar. Let the mixture cool a bit. 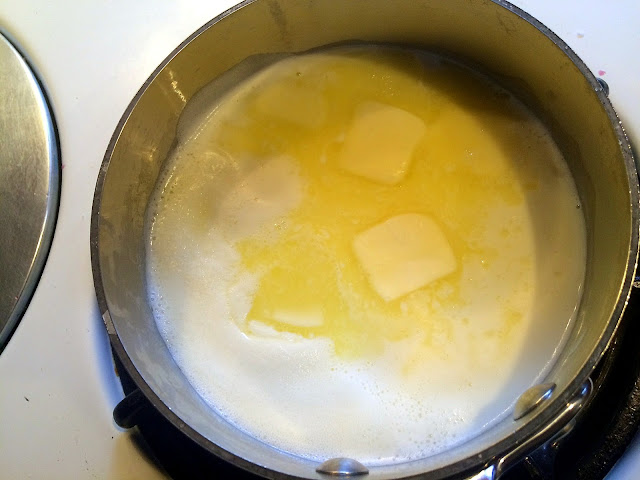 Proof yeast in a bowl. (Just mix it with warm water.) The yeast on the right (although it hadn't expired) was clearly dead. So I tossed it and tried some rapid rise yeast, which was expired (and is also supposed to be added dry to the flour) and it worked beautifully -- note the bubbles. This is one reason I love working with yeast; it is sooo forgiving. 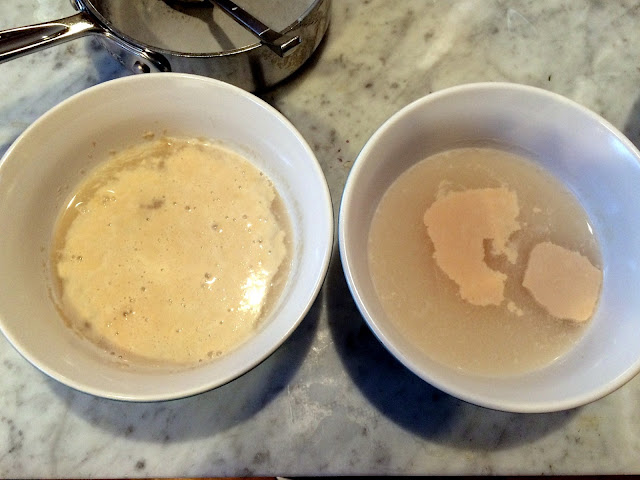 Mix the dough and knead a bit. I cheated and used my Kitchen Aid (with the dough hook). Cover and let rise until double. 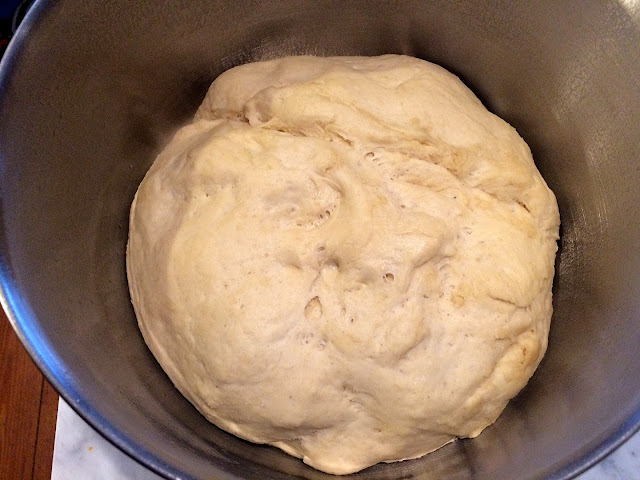 Punch the dough down, and divide in half. Roll half out on a board or counter sprinkled with cornmeal. Cut out circles with a three-inch biscuit cutter (or a glass, or whatever you have around). This dough is extraordinarily easy to work with. 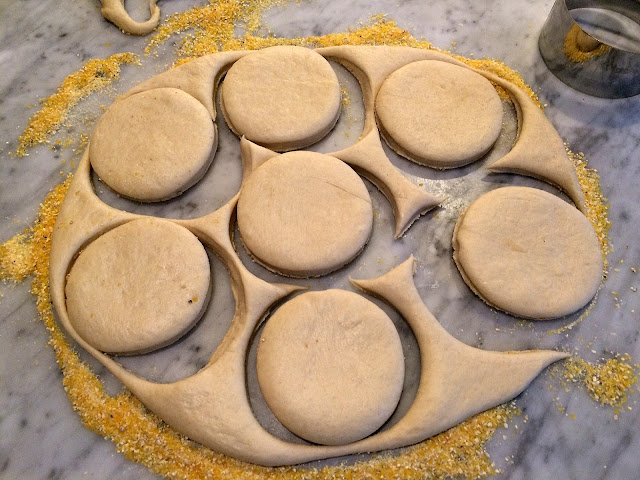 Place the muffins on a tray and cover. 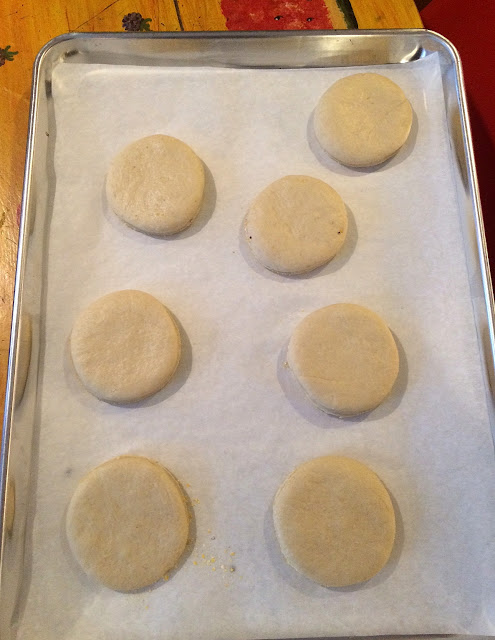 Until double in size (about an hour, or two episodes of Mozart in the Jungle). 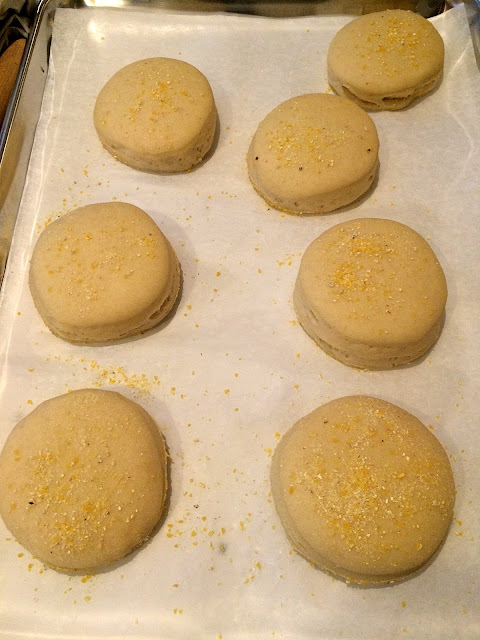 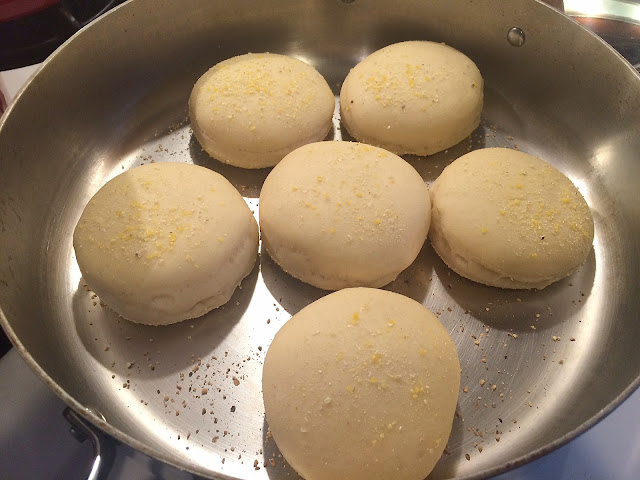 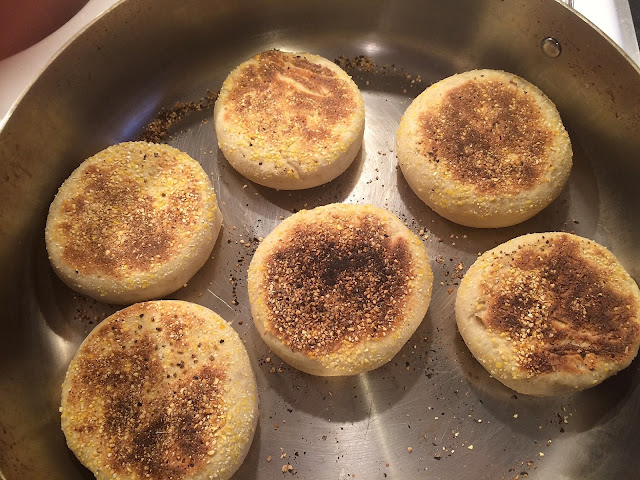 These were enjoyed by my friend Judith, a Long Island resident who spent the snowy weekend with us, in order to get to her job. This is her, right after she finished her second consecutive 12-hour shift as an emergency room nurse at the local hospital.  (Letting me take her photo was the price she paid for her room-and-board.) 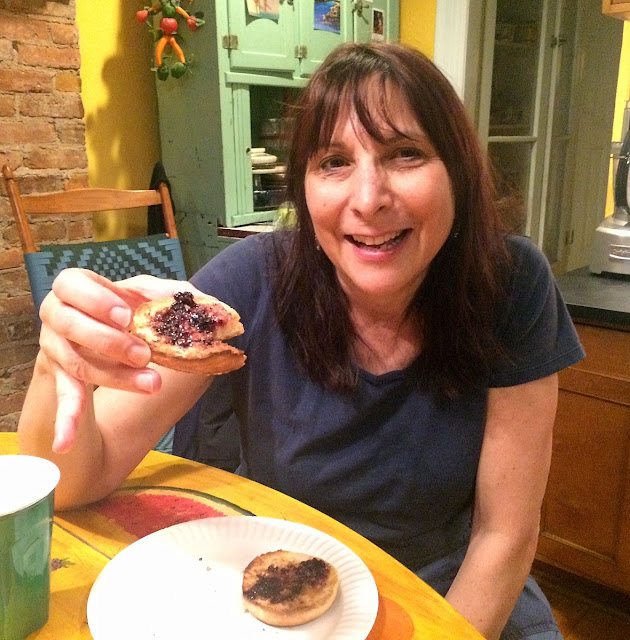 Here's the original recipe card, and below that is a typed, easy-to-read version. 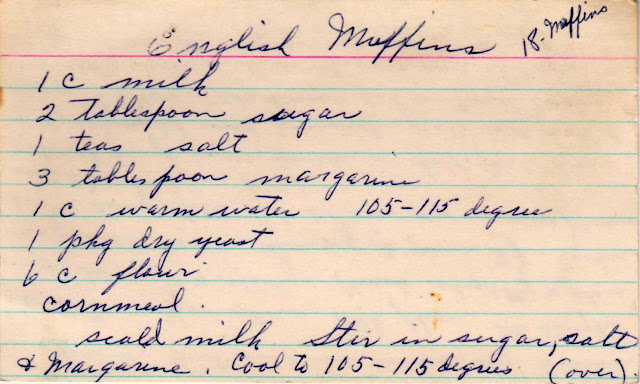 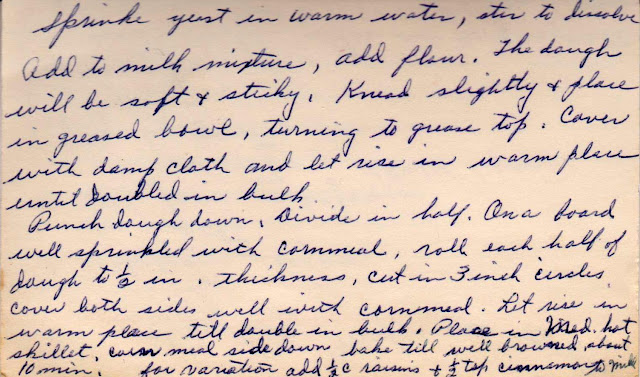 Production notes: The original recipe said that it makes 18, but I got just 13 from the dough. There were scraps to make more, but I didn't see how to combine them and roll them with incorporating all the cornmeal. I didn't use a thermometer at all. 105 - 115 is warm-to-the-touch. If in doubt with the yeast, go colder -- too hot and it will die. I used butter instead of margerine, but otherwise followed this exactly.  Getting the right stove top temperature is critical, otherwise the muffins will be cooked on the outside and gummy inside. I did a few at first to experiment, cutting them open. If they are too gummy at the end, you can always pop them in the oven for a few minutes.

Scald milk (bubbles will form around the edge of the pan). Stir in sugar, salt and butter.
Cool to 105 - 115 degrees)
Sprinkle yeast in warm water, stir to dissolve.
Combine yeast mixture and milk mixture in a large bowl.
Add flour and mix. Knead slightly (or more, if using a mechanical kneader).
Place in greased bowl, turning to grease top.
Cover with a damp cloth and let rise in a warm place until doubled in bulk.
Punch dough down, and divide in half.
On a board sprinkled with cornmeal, roll each half of dough to 1/2 inch thick.
Cut in three inch circles. Cover both sides well with cornmeal.
Let rise in a warm place until doubled in bulk.
Place in a medium hot skillet, cover the pan and bake until browned, about five minutes. (You'll need to do this in batches, depending on the size of your skillet.)
Flip and bake the other side.
Remove from skillet.
Enjoy!
Variation: Add 1/2 cup raisins and 1/2 tsp. cinnamon to milk. 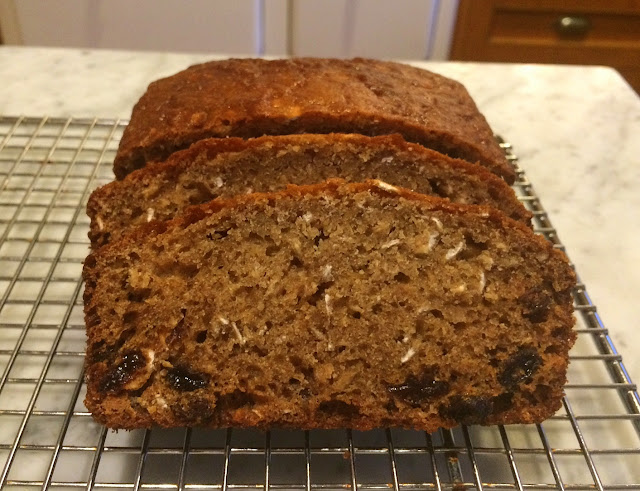 Still on your New Year's diet? Then this oatmeal raisin bread, with its low fat and sugar content, is perfect. Though the name evokes the sweetened yeast-risen bread, it is instead a health loaf, albeit one from the 1940s.  The recipe is from the collection of an ambitious cook from Suring, Wisconsin, whose recipe cards were sent to me by her daughter-in-law.

It tastes better than one might think (at least it disappeared when I put it out for my day job colleagues). It is a dense and wholesome bread guaranteed not to induce guilt, unless you're on a strict no-carb diet.

I chose to make this because it was late at night, it seemed really easy (it is) and I had all the ingredients, even the evaporated milk! Adding vinegar to evaporated milk creates a buttermilk, so I'm pretty sure that buttermilk can be substituted if you haven't evaporated milk in the pantry.

Pour the milk over the oatmeal. 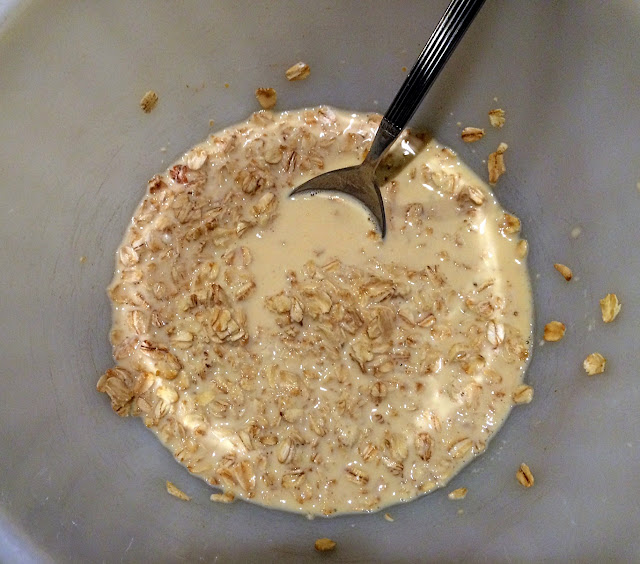 Although coating raisins with flour is supposed to keep them from sinking to the bottom of baked goods, this step didn't work. Still, it didn't detract from the finished product. 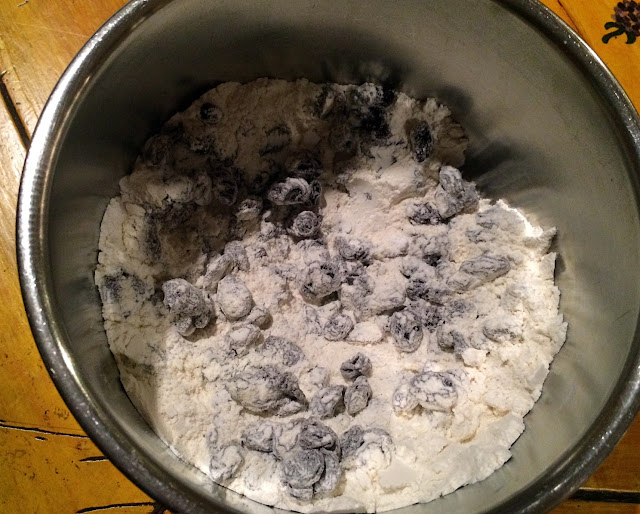 Pour the batter into a greased loaf pan. I'd suggest using a nonstick pan if you have one. 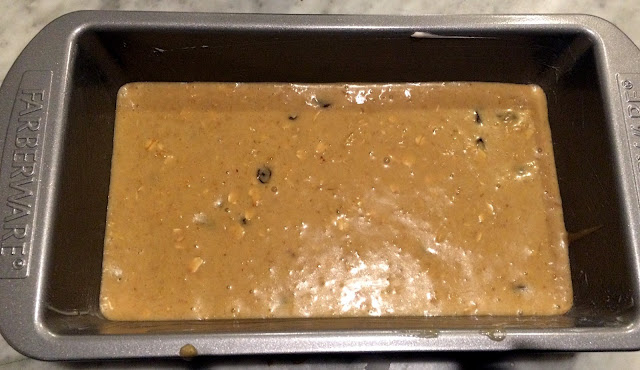 Let the bread cool slightly before turning it out. 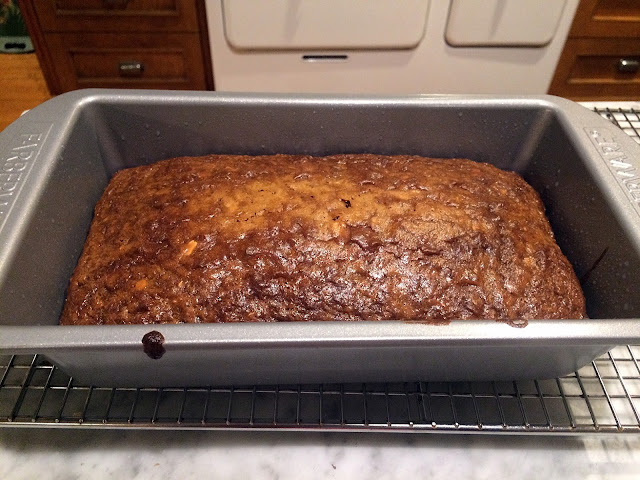 Even using a greased, nonstick pan the loaf was a bit of a challenge to release from the pan, but a butter knife around the edges and some firm smacks on the bottom proved successful. 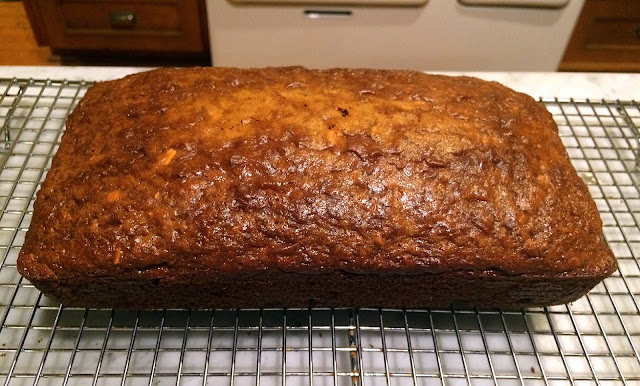 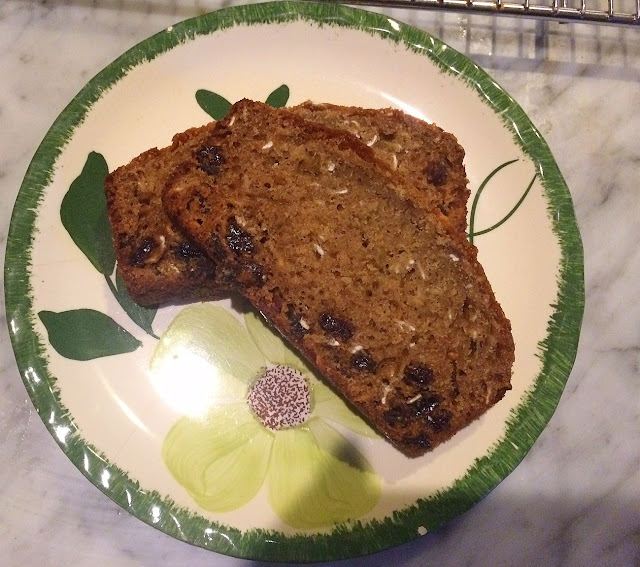 Production notes: I followed this almost exactly, using butter for the melted fat. I found it was done before 50 minutes, so begin checking at about 30. I've typed the recipe below, as the vintage card is a bit difficult to read. 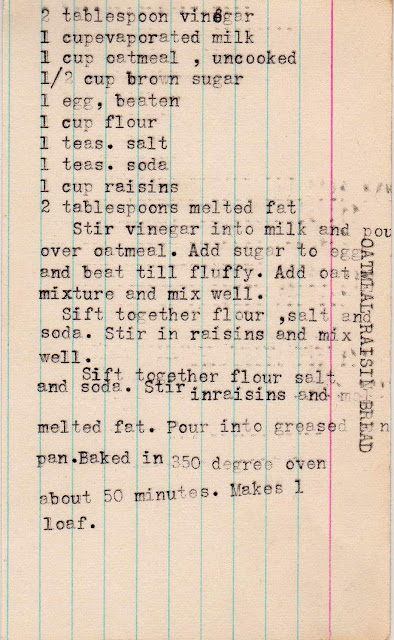