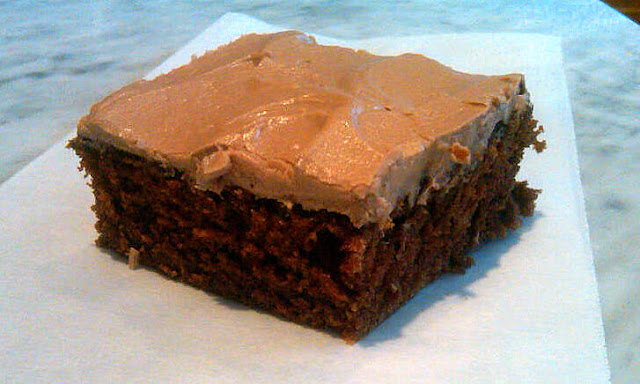 Life is full of miracles, big and small.  Unfortunately, this cake recipe is not among them.

Now, this is a perfectly fine chocolate cake recipe, but a miracle shortcut it ain't.  In fact the only shortcut I could see is that one need not wait for the butter to soften. Instead, the cold butter is "cut in" to the flour, similar to the method for making pie crust.

What I found most interesting -- and why I made this -- is the idea that even back in the day, housewives were searching out miracles, and shortcuts.  I imagine that this baker had a true eureka moment when boxed cake mixes debuted.

If you want try for a miracle, instructions are below.

These days, I use a food processor to cut the fat into the flour. It makes short work of a tedious process, which is kind of a miracle right there. 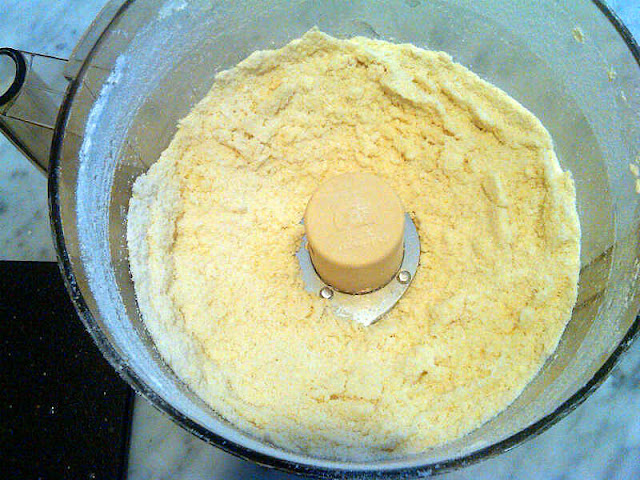 Add the liquid ingredients all at once. 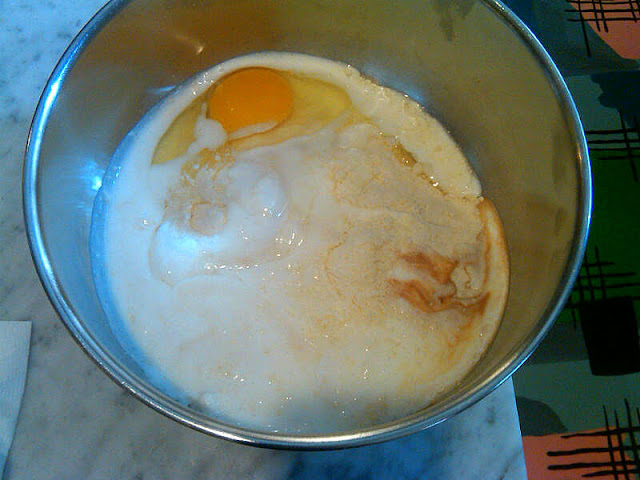 Next, add the melted chocolate. 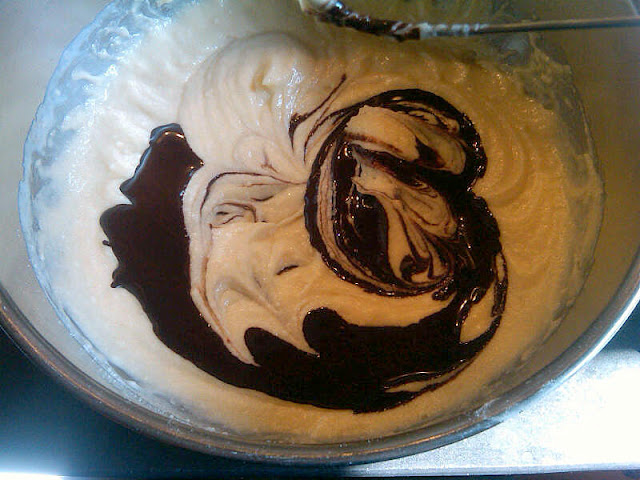 I frosted this with a mocha chocolate frosting, left over from another baking adventure.  You can make your own by making this recipe from the Magnolia Bakery, adding cocoa powder and brewed coffee to taste. 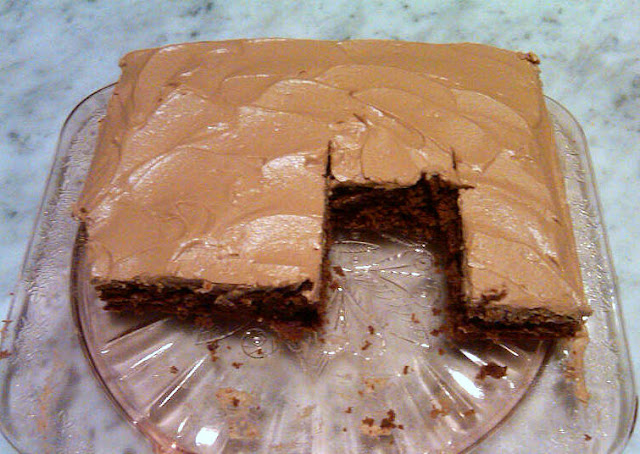 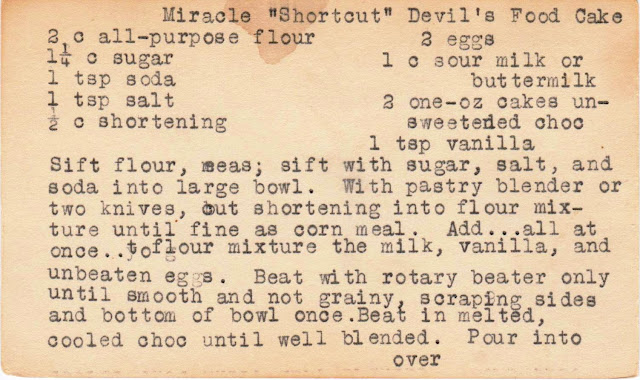 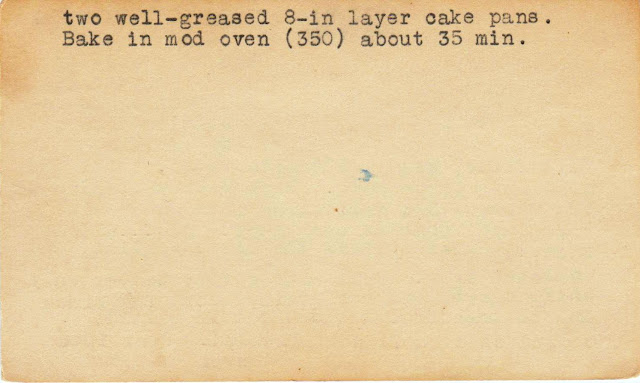 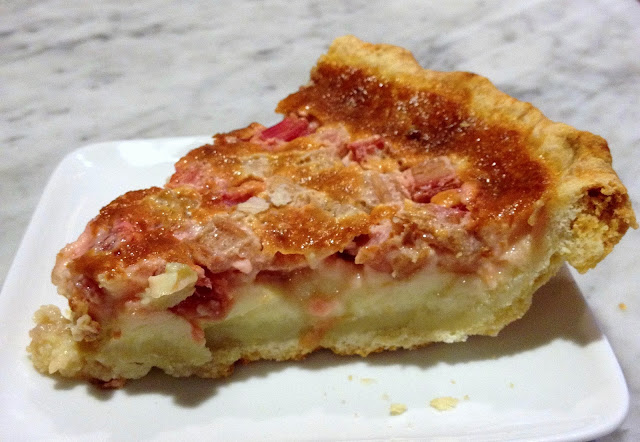 If you're like me and can't resist buying armloads of the ruby red rhubarb now appearing at the farmer's market, you've also embarked on a recipe search to use it before the stalks wilt in the refrigerator, along with your ambitious springtime baking intentions.

A search of the vintage recipe cards in my collection revealed dozens of rhubarb recipes-- this was a popular dessert vegetable, indeed.  The creative desserts include everything from rhubarb bread to rhubarb tapioca -- both subjects of a future post.  But what captured my attention last week was one for rhubarb custard pie.

This is a delicious custard-y pie -- but you must delay gratification for its best flavor emerges the day after it has been baked.  Out of the oven, the egg-y custard flavor dominates.  I like this a lot, but it's not to everyone's taste.  The next day, however, the rhubarb forms a lovely layer and the custard is rich and smooth.

This is a very quick and easy recipe.  Simply beat the eggs, sugar, flour and butter together.  Be careful not to let the mixture sit without beating, as the sugar will "cook" the eggs. 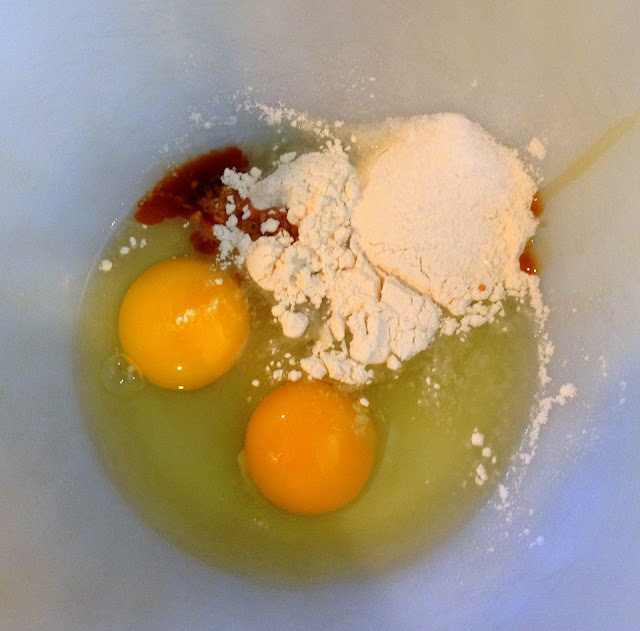 Beat in the whole milk. 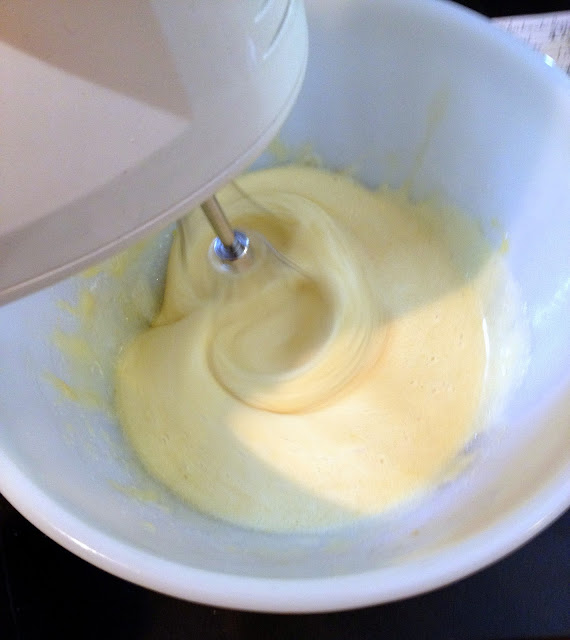 Meantime, place the diced rhubarb into an unbaked 9-inch pie crust. Actually, do this step first. 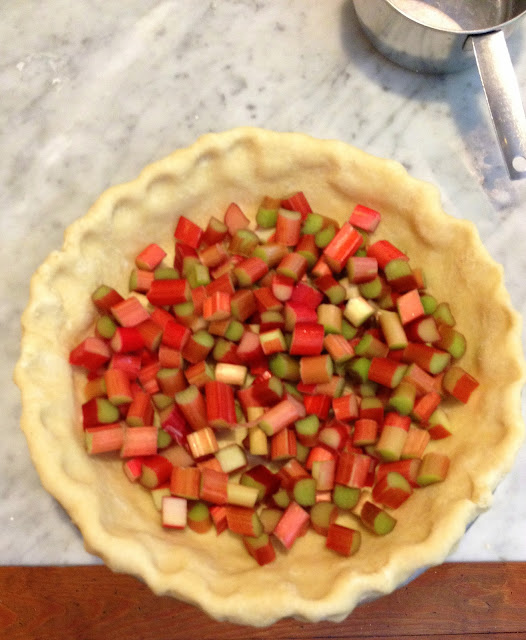 Pour the custard mixture over the rhubarb. Don't worry if it seems to liquid-y.  It will firm up in the oven. 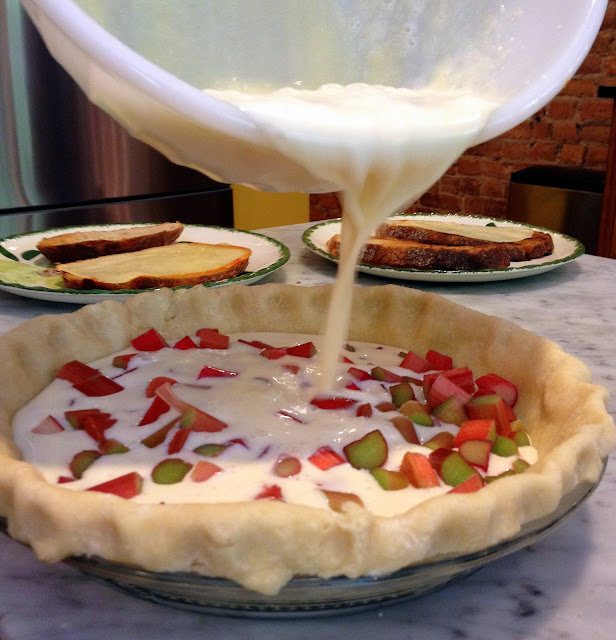 And, voila!  Not a gorgeous pie, but a delicious one. 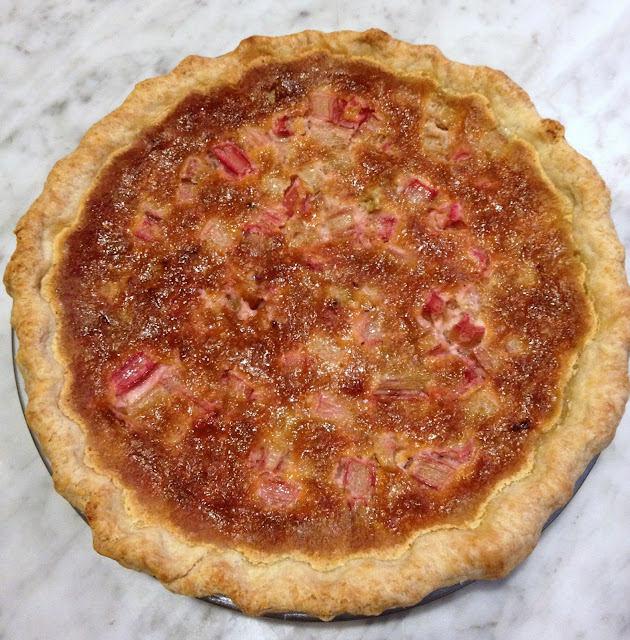 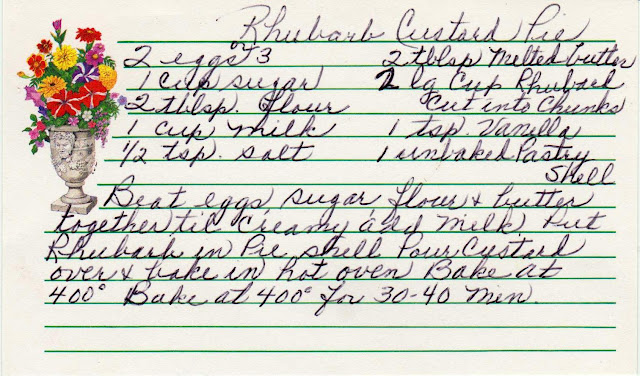 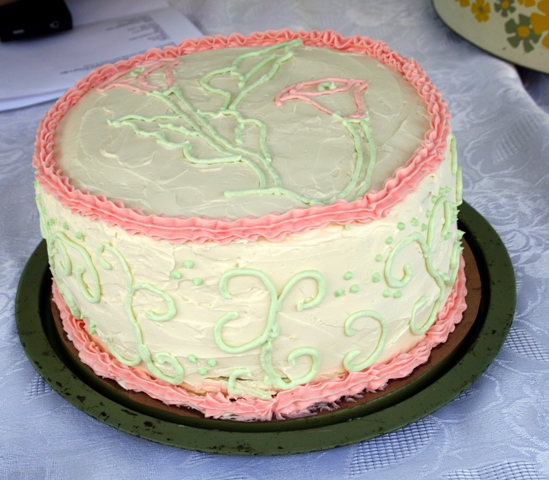 The first-ever Lillian Wald* Birthday Cake competition was held on May 6th at Henry Street Settlement's lively Lower East Side block party.  What the competition lacked in quantity (though 20 people registered, only seven brought cakes) it made up for in creativity.  The judges faced some tough decisions but, like the cakes, rose beautifully to the occasion.

The winning cake, Lilies for Lillian (pictured above), a vanilla custard layer cake with chocolate mousse and fresh strawberries, was entered by bakers Jillian Besemer (a reader of ACakeBakes!) and Chris McKeever.  Second place went to Peggy Coon for her chocolate frosted banana cake, and taking third place was Kira Wizner (assisted by daughters Leilani and Cecily) for a lemon pound cake presented as a page from Lillian's journal.

The only thing more exciting than the cakes was the esteemed panel of judges: Arthur Schwartz (a food writer and radio personality who The New York Times called a "walking Google of food and restaurant knowledge"), Rozanne Gold, (a renowned chef and author who began her career at age 23 as chef to New York City Mayor Ed Koch), Tara Bench, the talented food and entertaining director of the Ladies Home Journal, and enthusiastic eaters Ed Litvak and Traven Rice, founders of The Lo-Down, the Lower East Side blog and print magazine. 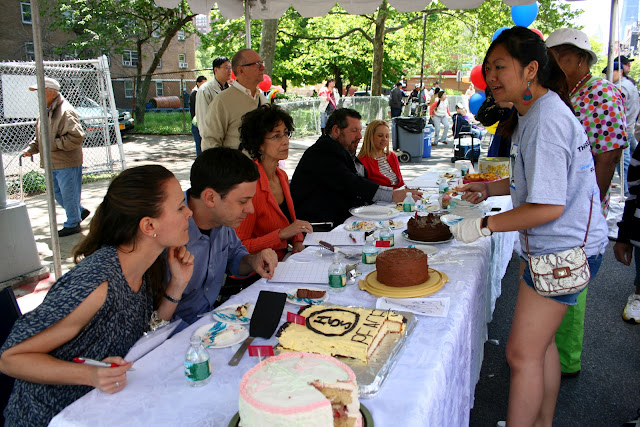 The judges hard at work, assisted invaluable volunteer May Wong (standing at right). 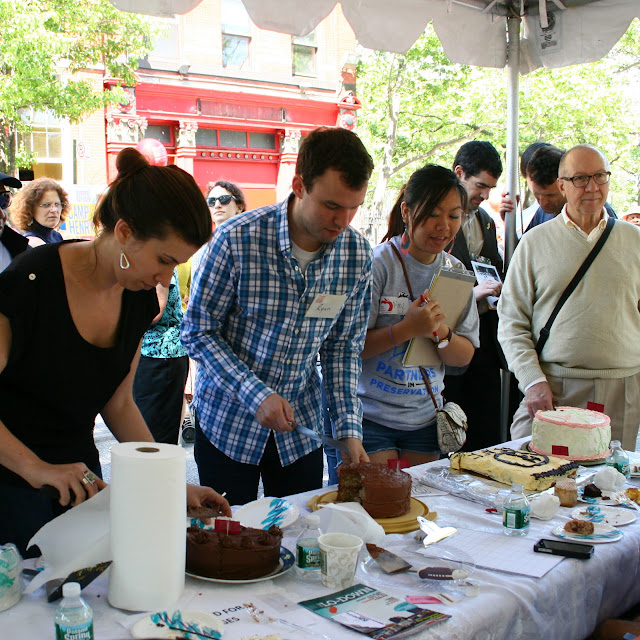 Henry Street staffers Ellen Schneiderman and Ryan Wenzel sliced up the cakes and distributed them to party guests after the competition ended. 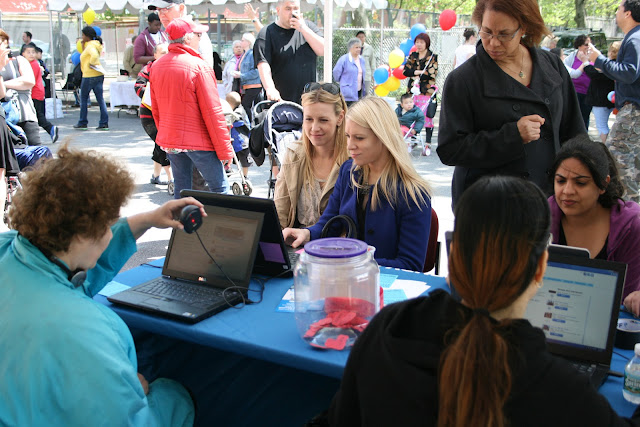 Here's an image of party goers voting for Henry Street in the Partners in Preservation competition.  If you've read this far, then you too can take 30 seconds to vote for Henry Street.  Just go to partnersinpreservation.com or Henry Street Settlement's Facebook page to help the agency win a $200,000 grant to make its historic buildings more energy efficient.

*Lillian Wald, whose 145th birthday the block party was celebrating, founded Henry Street Settlement in 1893.
Posted by Susan at 10:23 AM 2 comments: