The Pie Crust Games (Book One) 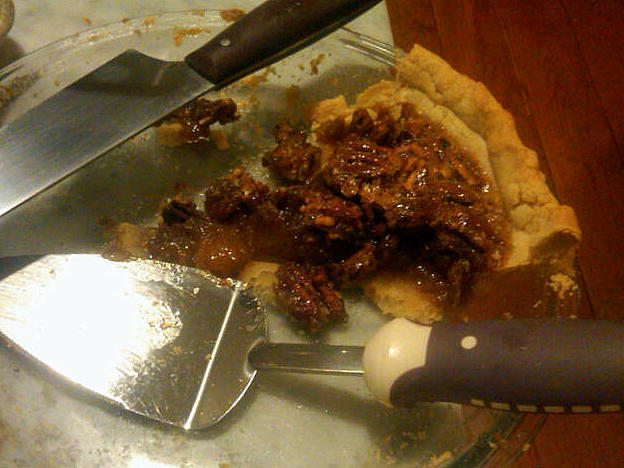 As many of you know, I've been playing a losing game with pie crust for years.  But all that changed on Saturday night when I learned the secret from -- of all people -- Antonio Carmena, soloist for the New York City Ballet.

Antonio was in my kitchen preparing the second in the series of Ballet Dinners -- meals created from the recipes of ballet dancers published in the 1966 Ballet Cook Book and conceived by Ryan Wenzel, dance editor of the Brooklyn Rail and author of the Bodies Never Lie blog.  For this dinner, we were cooking the recipes of Diana Adams, a native of Tennessee and so dessert, naturally, was pecan pie.

I won't lie -- I fretted about the pie crust from the beginning.  It was daunting to have to make a pie when there were so many other time-consuming dishes (shrimp bisque, fried chicken in cornmeal spoonbread, yam pudding and hush puppies, not to mention vodka lemonade) to prepare. I was going to make it myself in advance, but I'm glad I didn't.

The pecan pie recipe (below) simply said to place the filling in a pre-baked 8-inch crust.  When Antonio arrived, he knew a crust recipe by heart: Two cups flour, one stick cold butter cut into small pieces, and one teaspoon each of salt and  sugar.  He mixed the dry ingredients in the food processor and added the butter. Once the fat was incorporated, he added some ice water until the crust came together.  He formed the mixture into a ball, covered it with plastic wrap and placed it in the refrigerator.  (And then turned his attention to the rest of the meal.)

After an hour or so, the magic began.  Antonio rolled the pie crust out between two pieces of plastic wrap, eliminating the need for extra flour which, in addition to making a mess, can sometimes toughen the crust. Somehow, he formed a near perfect circle.  He removed the top layer of plastic wrap and carefully (and perfectly, I might add) placed the crust in the pie plate.  And then -- because we had to bake the crust first without the filling -- did something I couldn't imagine would work.   He kept the sheet of plastic wrap on top of the crust, using it to carefully press it into the pan. He then proceeded to fill it with dried beans (which prevents the crust from puffing up during baking). "Oh, no," I exclaimed, thinking the plastic wrap would melt on contact in the 400 degree oven, filling the kitchen with noxious smoke.  "I have parchment paper for that."

Antonio reassured me that he had done this many times, even using the same brand of plastic wrap that I had.  (Hello, Costco.) Let's just say that I was astonished this worked and his novel method is now mine. It is fool-proof, even for a timid game contestant like me.

The pecan pie was magnificent, even better than the one I've used for years.  As usual, dessert was the best part of the meal.  No need to wait until Thanksgiving to try this -- just pretend you're a ballet dancer from Tennessee. 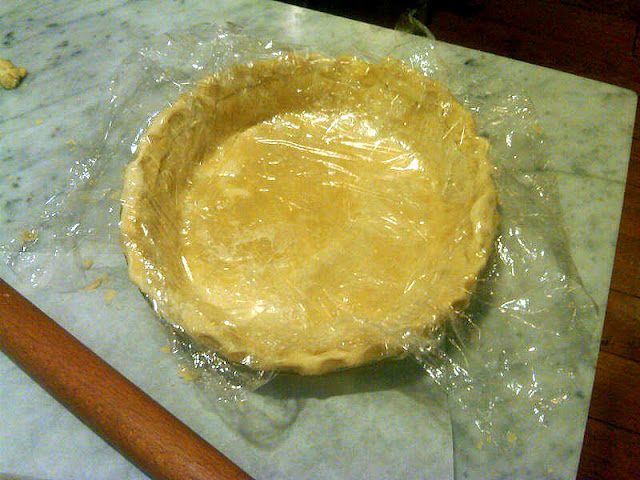 Antonio holding his masterpiece, below. 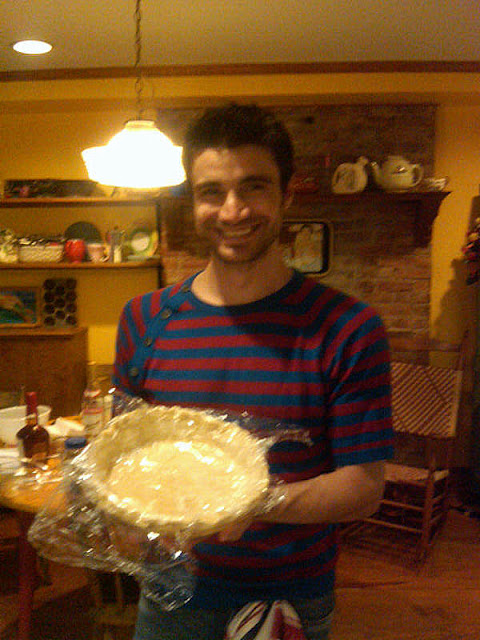 Cream butter and sugar. Beat in eggs one at a time. Stir
in corn syrup, pecans, flavoring, and salt. Fill pie shell and
bake at 375° F. 30-40 minutes or until a knife inserted in
pie comes out clean.

(A big shout out to Antonio who not only made the entire pie but saved it from burning after I had turned off the timer, lest the noise disturb out dinner conversation.  Even after a lot of scotch and vodka lemonade, he proved himself the real kitchen pro.)

Below, is the dinner's main course, fried chicken in buttermilk spoon bread.  Doesn't it look like the chicken is trying to claw its way out of the pan? 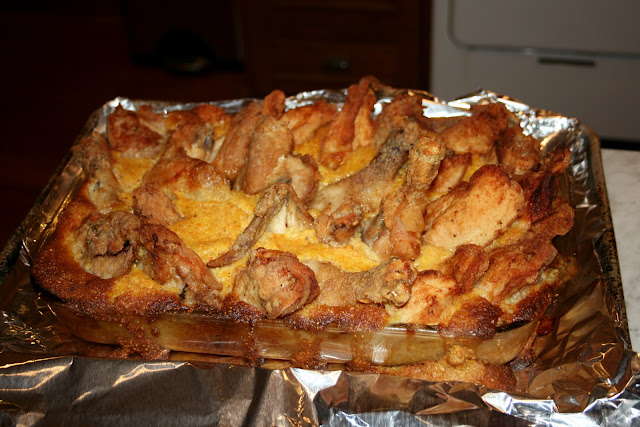