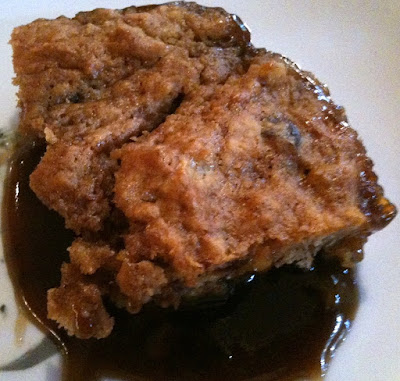 This Date & Nut Pudding is the kind of old-fashioned comfort dessert that's perfect after dinner on a cool September night.  It has it all --  a sweet and richly complex pudding beneath a nutty cobbler-like topping. 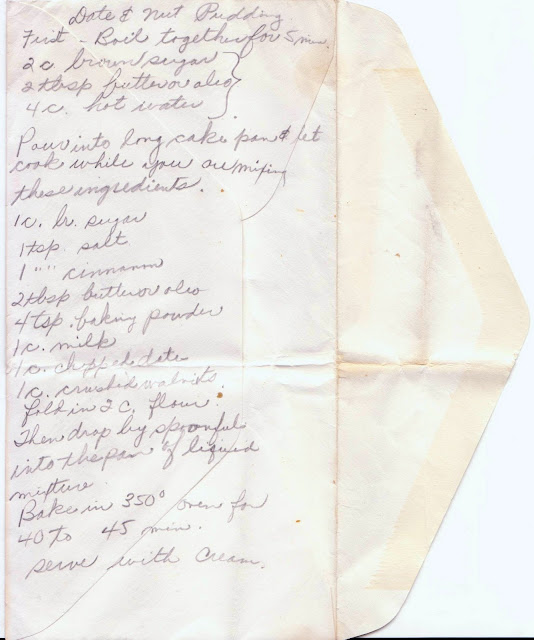 What sealed the deal for me was that this recipe, discovered in a recipe box I got on eBay, is written on the back of an envelope!  My entire life has been planned on the back of envelopes; even our major kitchen renovation was designed on one.  Seriously. And if I were a more organized sort (the type who never has to resort to using the back of envelopes) I would be able to find that envelope -- I know it's here somewhere. 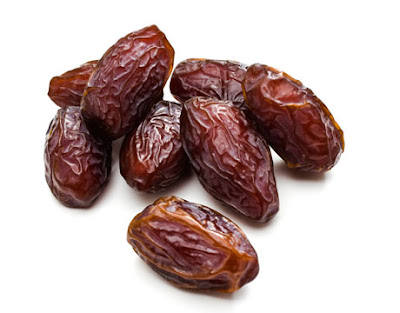 Another appeal of this recipe is its unconventional technique -- boiling ingredients for the pudding, cooking the   liquid in the oven while the topping is  prepared, and then spooning that mixture atop the liquid.  Also, it's idiot-proof and takes about six minutes to make.  And DH and I were recently in Ohio Amish country, where we dined at Mrs. Yoder's Kitchen in Mt. Hope, and I had a wonderful Amish date pudding there, a dessert often served at Amish weddings I'm told.

I had all the ingredients on hand, having wisely purchased dried dates instead of Cake Mix Ice Cream at the bodega the night before.  It's pretty amazing just  how many of these old recipes call for dried dates and buttermilk and how few (read none) ever use ingredients like vanilla beans or fresh ginger.

This is a homey (and homely) dessert, not a good choice for dinner parties as its appearance won't wow guests.  Of course, that didn't stop me from serving it, with freshly whipped cream, to my friends Karin and Jim who stopped by last night after we all had dinner at Ghenet, an Ethiopian restaurant in Park Slope.


A few production notes:  I halved the recipe and used an 8 x 8 inch square pan.  The pudding was quite runny at first but firmed up  after a night on the counter.  If you plan to serve this right away, reduce the amount of water to three cups.
Posted by Susan at 9:50 PM