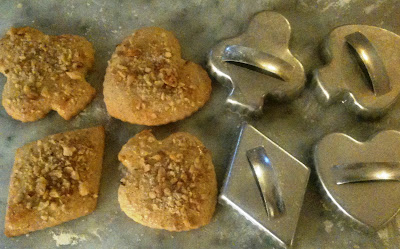 You know when you hear something, and you're positive that you'll remember all the details so you simply jot down a few words, certain that you'll  be able recall everything when you need to? That's what happened when my Grandma Jean, shortly before her death, told me how to make her famous "deck of cards" sugar cookies.  How else can I explain these confusing, cryptic notes that pass as a recipe?  (I remember sitting at her kitchen table and taking these notes as she was talking.) 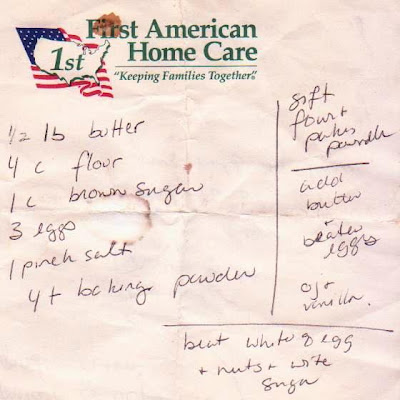 I made these cookies last week, after FINALLY receiving the vintage cookie cutters I ordered on eBay, which took more than six weeks to arrive from Canada.  It turns out that U.S. Customs caused the delay, not Colton Harris-Moore. 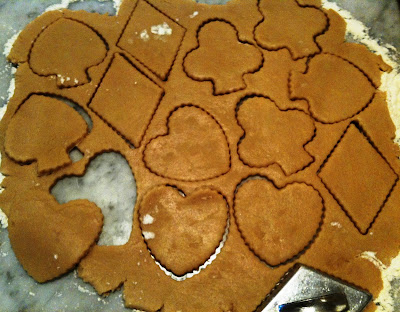 It took a leap of faith and a lot of guessing (how much orange juice? how hot an oven?) but they tasted pretty good.  However, I wasn't transported back to my childhood and my grandmother's kitchen where her cookie jar was almost always filled with hearts, spades, diamonds and clubs.
Even DH thought I didn't quite get it right, though my co-workers thought the cookies were divine and devoured them in a matter of minutes.  Hmmm....maybe this IS worth revisiting. 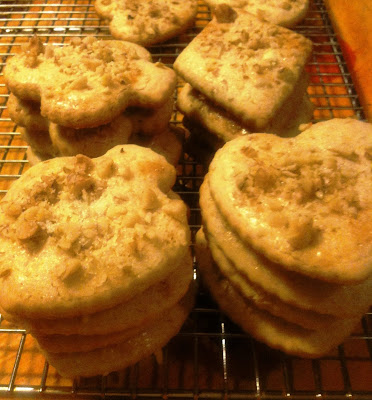 Grandma Jean was a prolific cook and baker, whipping up breads and chicken fricassee and holiday meals for 20 at the drop of a hat.  If she wasn't in her home kitchen, she could be found in the commercial kitchen of her temple, preparing luncheons and dinners for events.  She baked well into her 90s, even making the challah bread for both my children's Bar and Bat Mitzvahs when she was nearly 100.

She was also resourceful. As I was copying down the recipe, she told me that a while back my brother had asked her to make a pie.  Being an immigrant from Eastern Europe, she really had no experience with American pie crusts, but figured that a cookie dough would be a fine substitute.  I don't know if it was; my brother doesn't remember asking for or receiving a pie, nor does he remember giving DH some unsolicited "advice" at our engagement party, some um, "concerns" about marrying me.  Luckily DH didn't listen, and my brother swears he never said it.  And no one took any notes.