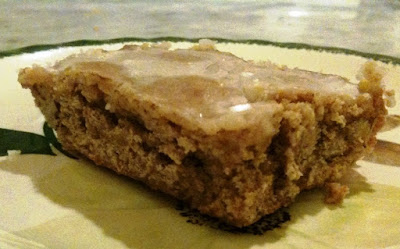 Did you know that there is a whole genre of baking with gumdrops?  I didn't until I discovered a hand-written 1952 recipe called Yummy Gum Drop Squares, which led to some internet research revealing all manner of cakes, cookies and squares adorned inside and out with gumdrops.

These I had to try, for I love candy.  Almost as much as DH does.

Adding to the appeal is that the recipe card is signed by the collector, a Sharon Malone, and attributed to a Mrs. Cates.   I always think of these recipes as even more valuable, that someone thought enough of it to "claim" ownership. 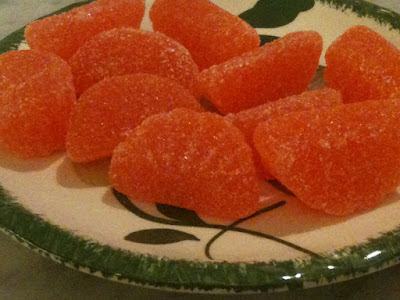 The problem was, I had never even seen the orange slice candy called for in the recipe, so months went by and I just put the recipe aside.  And then, one day while visiting my mother-in-law who had just moved to an assisted living facility ("the institution," as she calls it) in New Jersey, I stopped by a 7-Eleven and there, right at the cash register, were bags of orange slice candy! 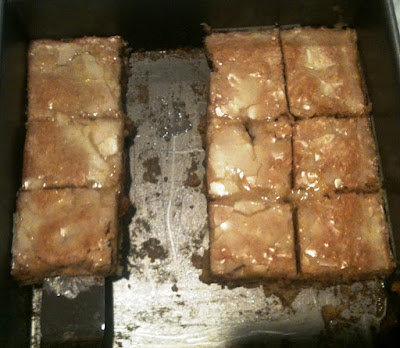 The candy was really good.  So good, that I ended up eating too many, that I didn't have enough for the recipe.  But I knew that I would return to visit my mother-in-law before long, and was able to get another bag of orange slices.

Not surprisingly, this recipe is part of a collection from Texas, where they sure like their sugar.  These bars are very sweet, but strangely addicting.  While they certainly wouldn't do for a dessert at a dinner party, as an after school snack, they'd be perfect.

If you make these, don't do what I did -- try to shred the candy in a food processor.  I ended up with one big gummy ball of orange sticky candy.  Instead, just slice the candy with a knife.  Sometimes the simple, old-fashioned way is best. 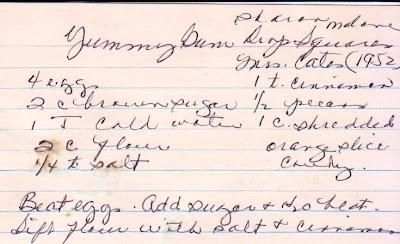 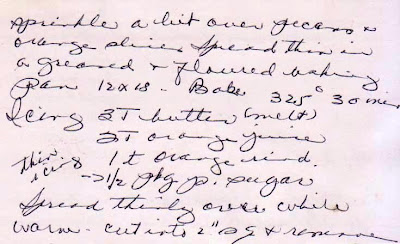