A Cadillac in My Kitchen 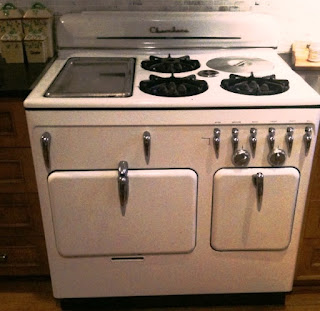 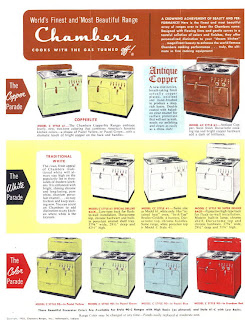 Some of you have asked me about my vintage stove* (the backdrop for many a cake picture on my blog).  It's a c. 1950 Chambers, manufactured in Shelbyville, Indiana, and once called the "Cadillac of Stoves."
Its tag line was Cook with the Gas Turned Off!, which was designed to "liberate" the housewife.  It is so well insulated that supposedly when the oven reaches the desired temperature and the chicken (or whatever) is placed inside, the oven can be turned off and the cooking will continue just fine.  I've never tried it, mostly because I didn't want to risk removing a half cooked chicken (or whatever) when it was time to serve dinner.
Still, it is a fabulous appliance:  The three burners have a lot of btu's and it has a Thermowell, a recessed well  (complete with pots and a rack) where one can bake muffins, cook soup, and more.  The top broiler is very convenient, and you can use its aluminum covering as a griddle.  And it has a real, old-fashioned pilot light, which was very handy during a NYC blackout a couple of years ago when my daughter wanted an omelet.  Most modern stoves have electronic ignition and don't work without electricty. 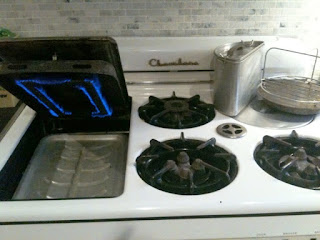 The Chambers oven is a bit small, which is why I also have an electric baking oven. But I'm on my third modern oven in 12 years; they keep breaking, while the 60-year-old Chambers hasn't failed yet.  (In fact, during a multi-month Kafka-esque nightmare with Con Ed when my electric oven wasn't working and I was supplying cafes with cakes, it was the Chambers oven that kept me in business.) 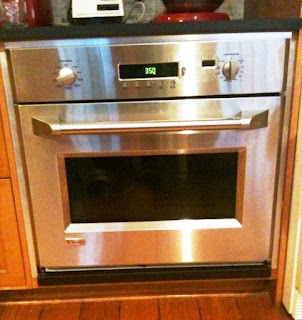 Chambers stoves have become quite popular in the past few years. Rachel Ray uses one on her television show, and there are a number of internet sites devoted to them.
We've had ours for nearly 20 years. When we were renovating our kitchen, I fell in love with a vintage stove -- a gorgeous robin egg blue 1939 Quick Meal -- but simply couldn't afford it.  (Those were the days when I believed in delayed gratification.)  Anyway, we found our now beloved Chambers on Long Island, where it was being sold by a family who had just modernized their own kitchen.  I've never looked back,
*Full disclosure: No one asked me about the stove.  I just wanted to write about it.
Posted by Susan at 9:33 PM