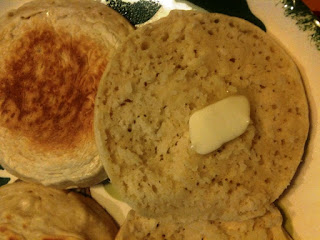 I had been wanting to make these for a while but lacked English muffin rings -- really, not even I had those in my kitchen drawer. But I was able to track some down at Sur la Table in SoHo, where I conveniently had a gift certificate, thoughtfully given to me by my good friend (and future boss) David.

The recipe I used was published in the 1908 New York Evening Telegram Cook Book.  I don't know much about the genesis of the cookbook, as the six-page introduction is missing.  I do know that there were a lot of New York daily newspapers at that time, maybe dozens (historian friends -- please correct me here), and now we're down to just three all, very sadly, barely hanging on. 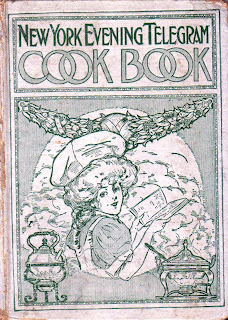 The recipe for Toasted Muffins, written in narrative form, begins: "The English housewife usually serves toasted muffins with sole for breakfast."  Being an American, I served them with jam and butter.

These couldn't have been easier to make.  Just mix a few ingredients together in the Kitchen Aid, and spoon the batter into the rings (which I greased and placed on a well-heated electric frying pan.) 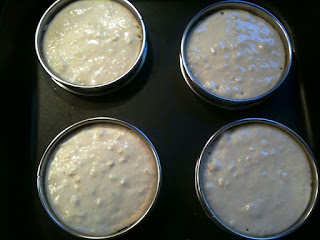 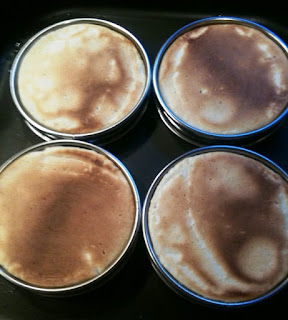 These were easy, but were they good?  I was pleased to see that they looked just like English muffins, complete with nooks and crannys, but DH and I thought they tasted a bit, um, gummy.

It was only several days later that I realized the problem -- and I'm almost embarrassed to admit it -- we forgot to toast the muffins!  That would have surely addressed the slightly gummy texture and toasting seems to concentrate the flavor of bread, so I bet they would have been really delicious. 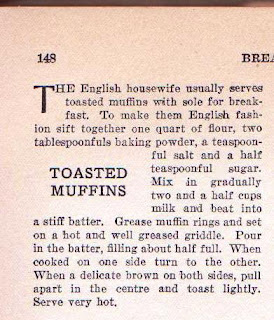