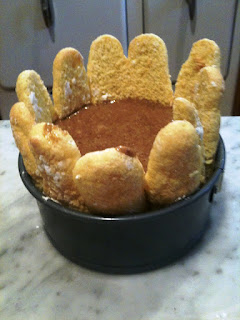 What better way to combat the blazing New York City heat than to engage in some icebox cookery.

Yesterday morning, I had no idea what icebox cake was.  I had heard of it, for sure, and it always conjured up a simpler era, and images of a luscious homespun treat, the very essence of wholesomeness served with fresh lemonade to suntanned children running into the kitchen laughing, slamming the screen door behind them, after a rousing game of kick the can in the sunny backyard.

Ok, ladies and gentleman:  I am about to shatter your (or at least my) notions of icebox cookery.

First, it involves heat.  That alluring "icebox" is just part of the picture, and one that doesn't come into play until after you've turned on the oven to 350 degrees to bake ladyfingers and stood over a hot stove for at least 15 minutes, stirring (constantly) the custard filling. 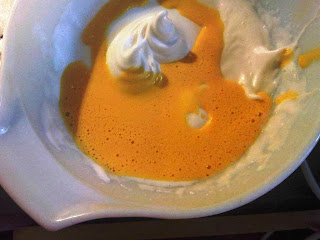 Above, is the mixture for the lady fingers; below shows them piped out (using a pastry bag with a round tip) on the baking sheet and then the finished cookie. The lady fingers recipe is from the c. 1931 Boston Cooking School Cook Book by Fannie Merritt Farmer. 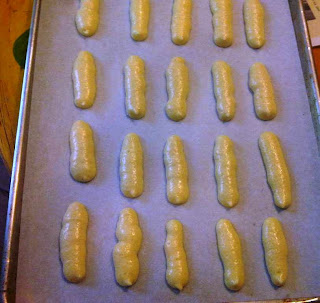 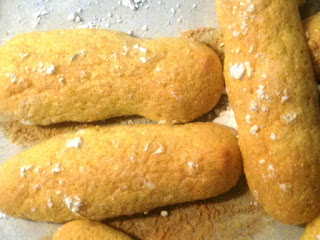 I did a little research and discovered all manner of icebox cakes exist.  Most of those created after 1925 (and popular today) involve a combination of store-bought chocolate Nabisco wafers and sweetened whipped cream or pudding.   The wafers are either stacked on top of one another (forming a cake shape) or placed sideways to form a log, using whipped cream as the mortar to hold them together. The idea is that stored in the icebox (refrigerator) overnight, the cookies (sometimes graham crackers are used) soften and become infused with the cream or pudding mixture, a case of the sum exceeding the parts.
These are true no-bake desserts -- assemble, chill and serve. The photo below is from Billy's Bakery in New York, which sells this version of icebox cake. 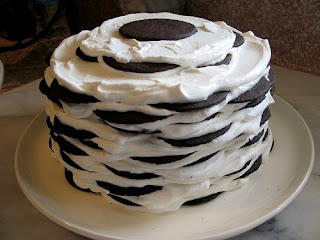 The more traditional mocha icebox cake that I made from a recipe in the c. 1953 Settlement Cookbook predates that version and is probably a closer to a charlotte, a chilled dessert that was very popular from after the Civil War to World War I, in which lady fingers or spongecake was used to line a mold, and filled with chocolate, lemon or other flavored custard. 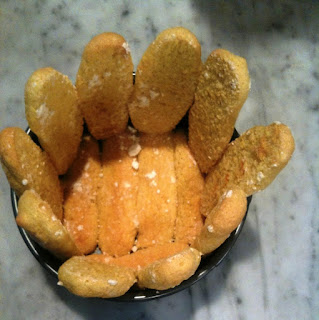 This old-fashioned icebox cake (shown above, before being filled with custard) was delicious and worth the heat and effort.  The mocha custard made the already delicious lady fingers even more so and although it's only 10 a.m., I've eaten more than half of it.  If DH hurries home from yoga, there may be just a bit left for him. 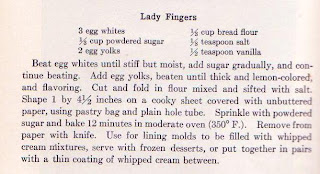 Update: DH arrived home just in time -- he got to try the icebox cake. And loved it.
Posted by Susan at 10:56 AM