Making Pie is NOT a Piece of Cake 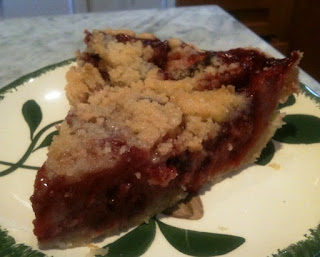 I was planning to make donuts yesterday, but because both the temperature and the humidity registered around 90, I thought better of it.

Instead, I cranked the oven up to 350 degrees for about three hours, in order to bake Strawberry Rivel Pie and Lemon Cake Pie, both from a scrapbook filled with hand-typed recipes.  Did I mention we don't have air conditioning?  The recipes are from the 1930s, so they probably predate air conditioning anyway. 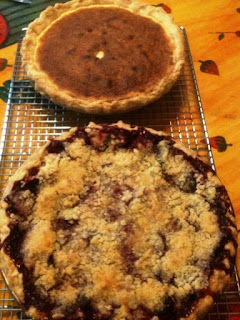 Pie crust has always flummoxed me.  I made my go-to pie crust (from the c.1980 Silver Palate Cookbook) but I don't know why it's my go-to crust, since it often doesn't work.  (I guess it's a case of choosing the devil I am most acquainted with.)

Pie crusts are sticky and messy and one never knows how much water to add -- too little and it's crumbly, too much and it's like glue.  I've rarely made a crust that rolls out beautifully and at the right thickness. I actually tense up when I make crust and I think it can sense it, the way a dog senses when someone is frightened.

I once considered a blog where I'd bake one pie a day -- mostly because I wanted to finally master the pie crust and, like most baking tasks, if you do them often enough, you become an expert.  Occasionally people are naturally good at something, but often, it's a matter of practice, a lesson DH heard Sonia Sotomayor tell students at his (and her) alma mater, Blessed Sacrament, last week. 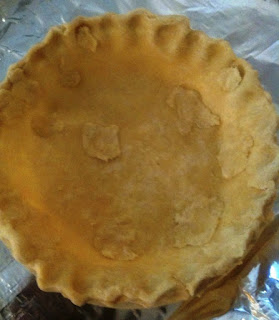 Back to the pies.  You can see (above) my need to patch the pie crust.  Still, the flavor and texture were excellent, and one day, I'm sure I will make a crust without fear.

The Strawberry Rivel Pie is FANTASTIC!  These days, it would probably be called strawberry crumb pie. Rivel (a term I've never heard of) is flour, sugar and butter "mixed as for pie crust," according to the recipe's author Ida Bailey Allen which, in modern times, means putting it all in the food processor and pulsing a few times.  One difference is that 1/4 of the rivel, or crumbs, are placed at the bottom of the pie, before the strawberries are added, and the rest go on top, which is quite brilliant because of the sweet crunchy bite it gives each piece.  I followed the recipe exactly, but baked it for much longer, maybe twice as long, and at 350 degrees. 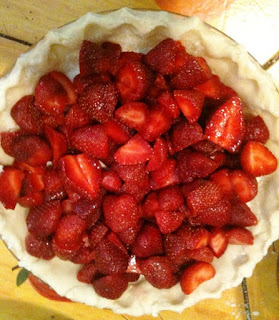 To use the second crust (for the recipe makes enough for two), I chose Lemon Cake Pie, which was pasted in the scrapbook near the Strawberry Rival Pie. The words: VERY GOOD MOTHERS were typed right at the top of the recipe. 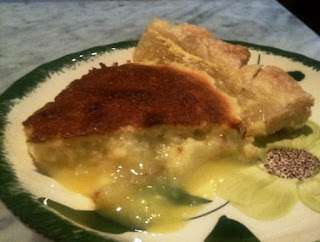 Lemon Cake Pie is good, but not great. Part of the problem was that I became impatient while it was in the oven, so I cranked up the temperature and went upstairs and got really into the movie, He's Just Not That Into You.  So the top of the pie browned more than it probably should have, while the center didn't set well, though it did eventually look much better than the slice above.   This really does call for a slow (300 degree oven).

It's similar to another old-fashioned recipe called Lemon Pudding Cake, in which a cake layer forms atop pudding when baked. I think this recipe has potential; the lemon flavor is excellent and the thin layer of white cake at the top is very nice (you can see it through the small hole I made in the photo above.)  One day, when the weather is nicer and I have a bit more patience, I may try this again.