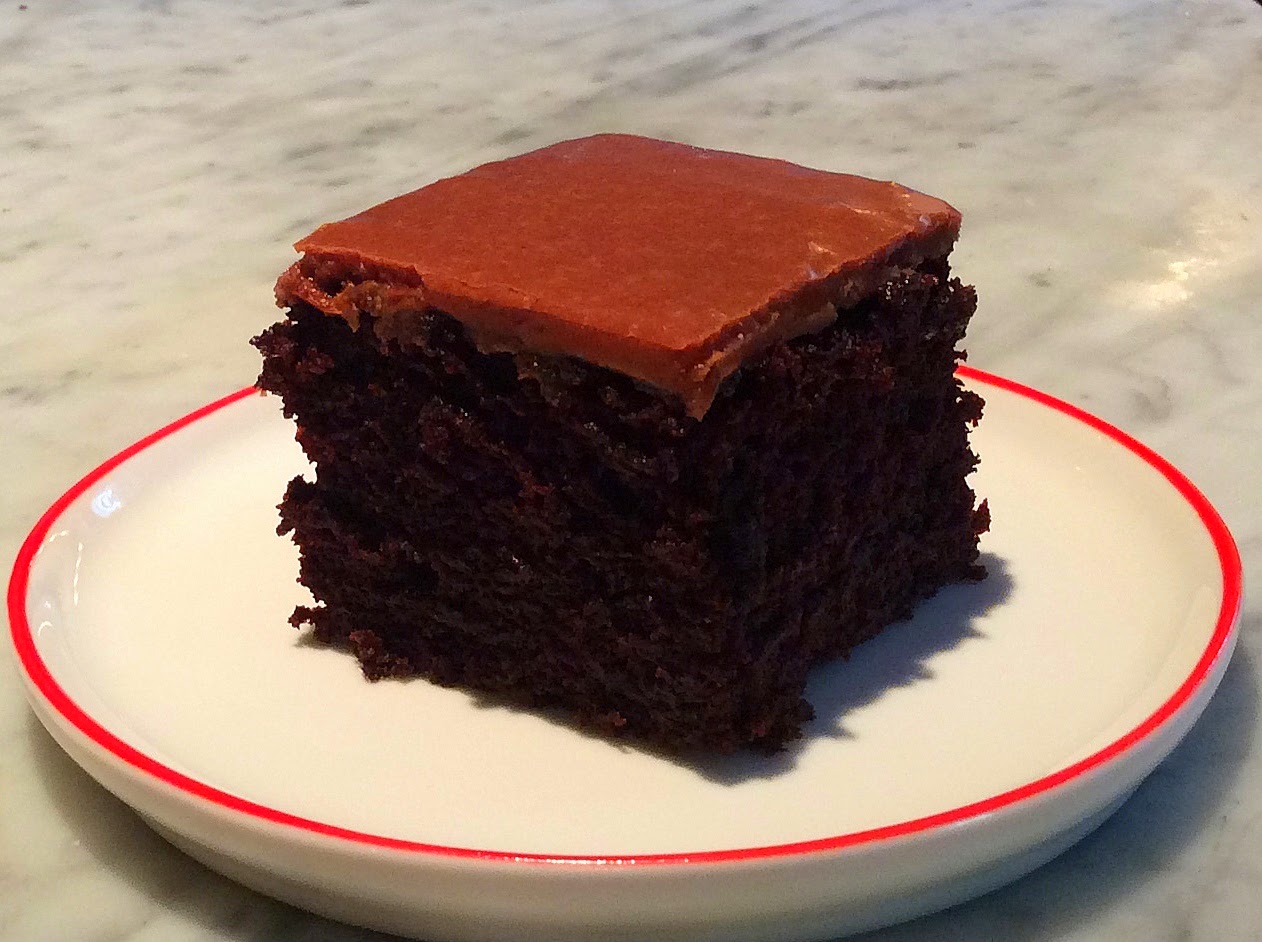 At 5:30 a.m. Sunday morning I baked a chocolate cake (don't ask) and it wasn't until it was in the oven that I realized, egads, it's vegan! No butter, no milk no eggs! But fear not gentle readers, for Wet Chocolate Cake is a dark, moist delicious beauty that could not be simpler to prepare.

I served it to two people dear to me: My new SIL, who said, as he wolfed down his second slice, "It tastes like regular chocolate cake!" And my friend Jordana, who also enjoyed two slices (and didn't share even a bite with Arno, her sweet and adorable 16-month-old son).

Having failed miserably last Thanksgiving preparing a vegan pumpkin custard dessert for my BIL, I was loathe to try another vegan recipe. I didn't give it a second thought, however, because most vintage recipes are decidedly not vegan.  However, this is from a collection I recently received from Arthur Schwartz, who apparently had an on-air discussion about eggless cakes. Which resulted in devoted listeners sending in dozens of such recipes -- this is by far the best of them. 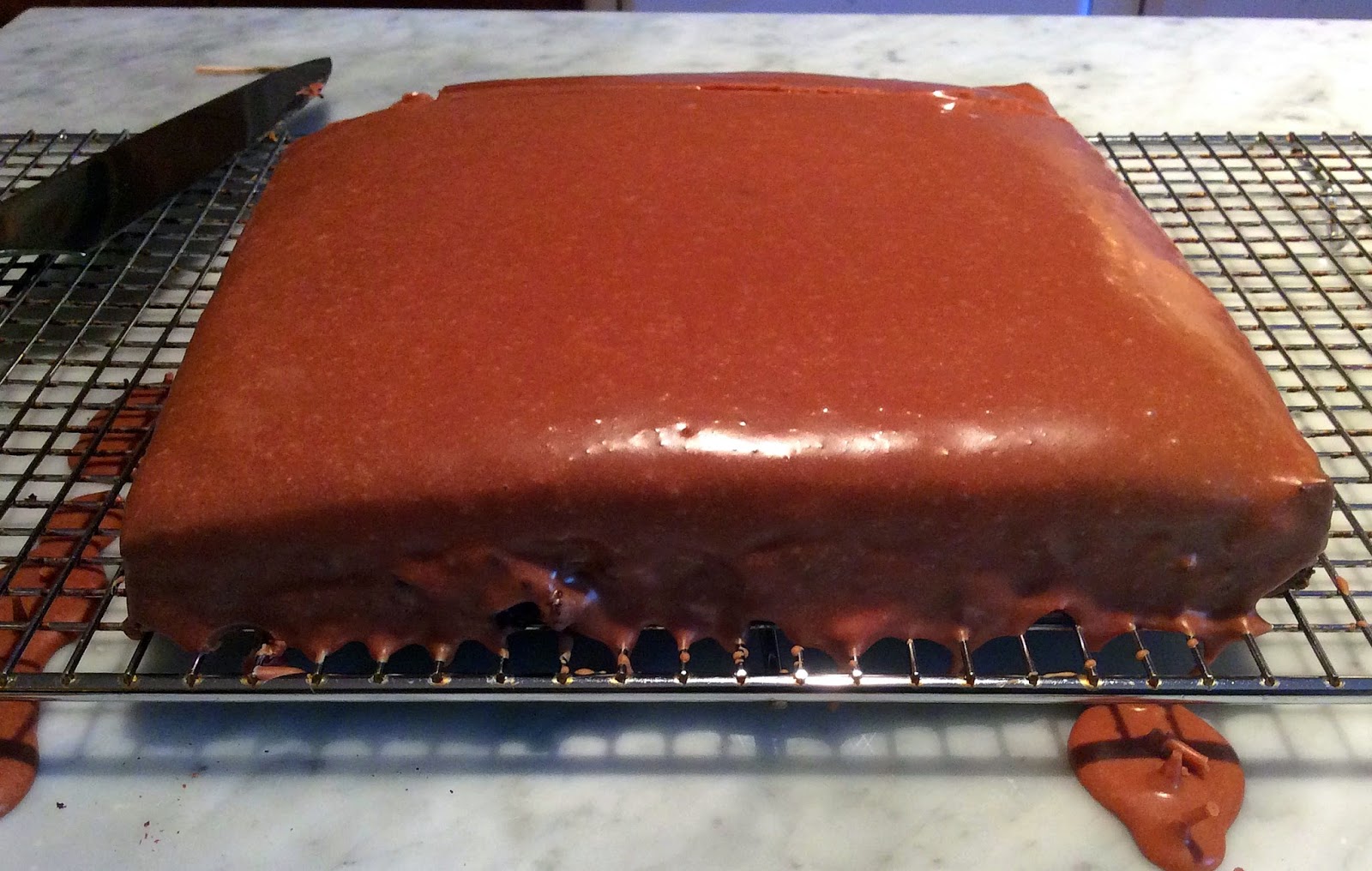 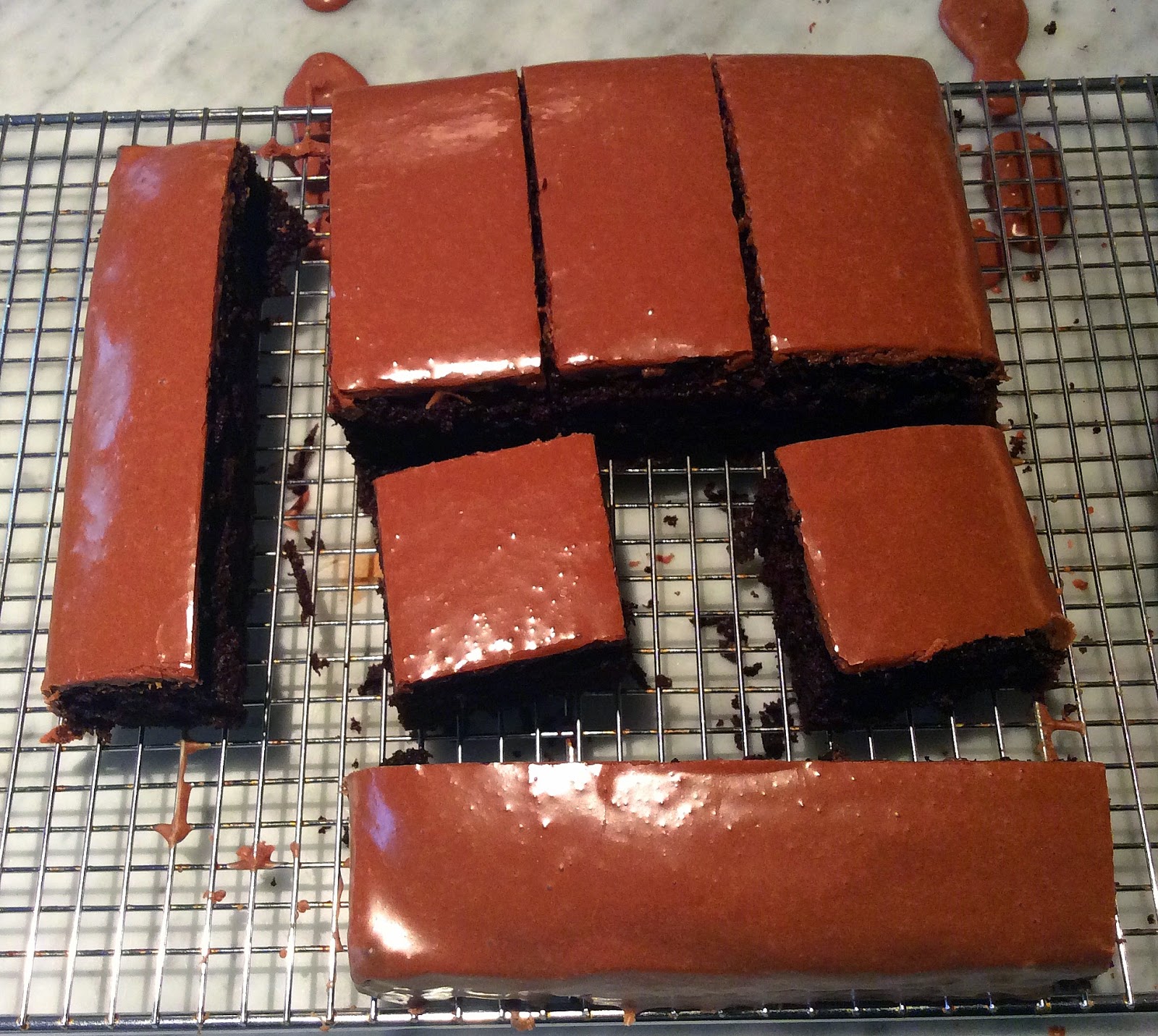 Start by sifting the dry ingredients into a large bowl. 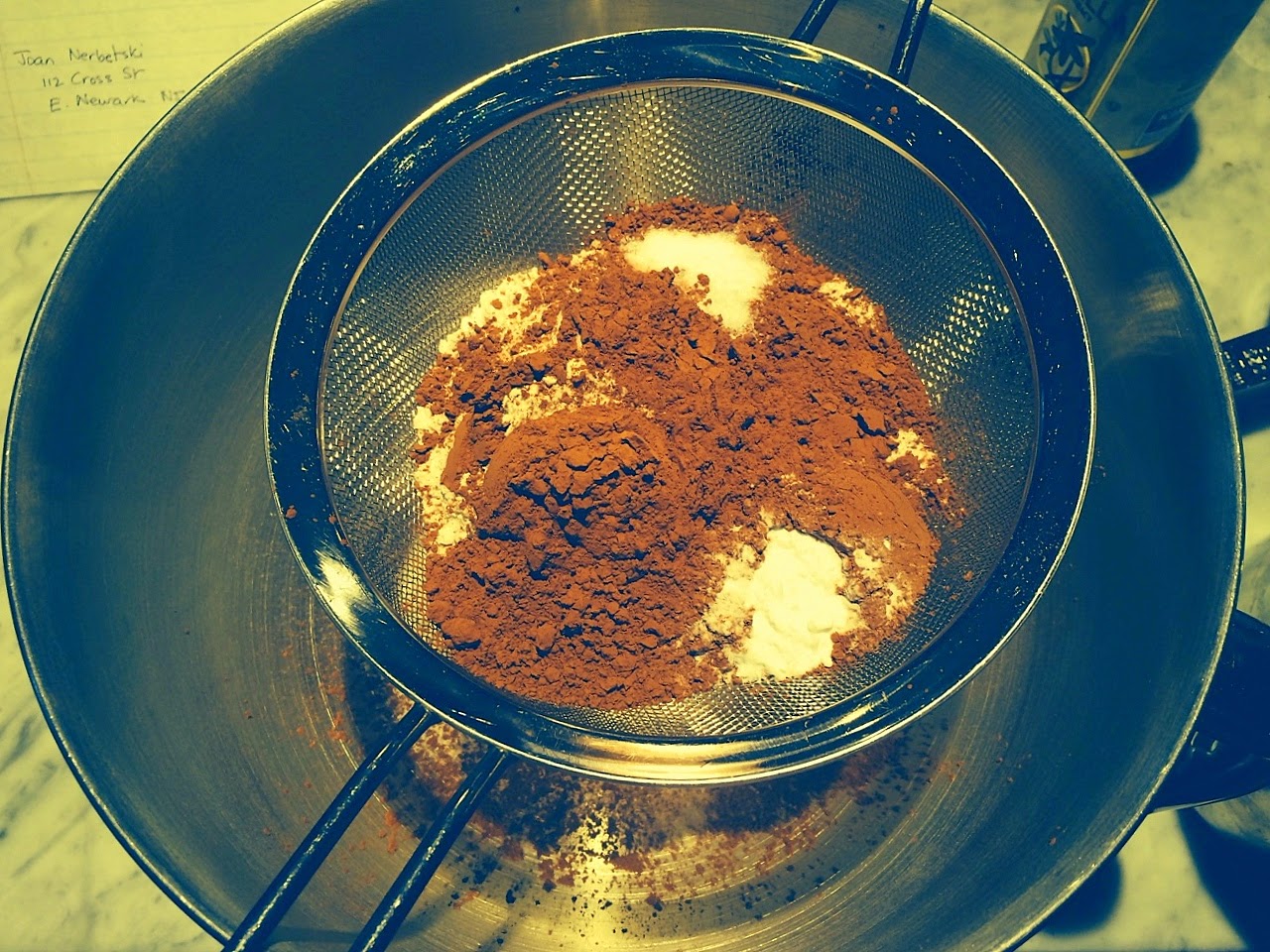 Mix the liquid ingredients together, pour into the the dry ingredients and blend for about one minute. 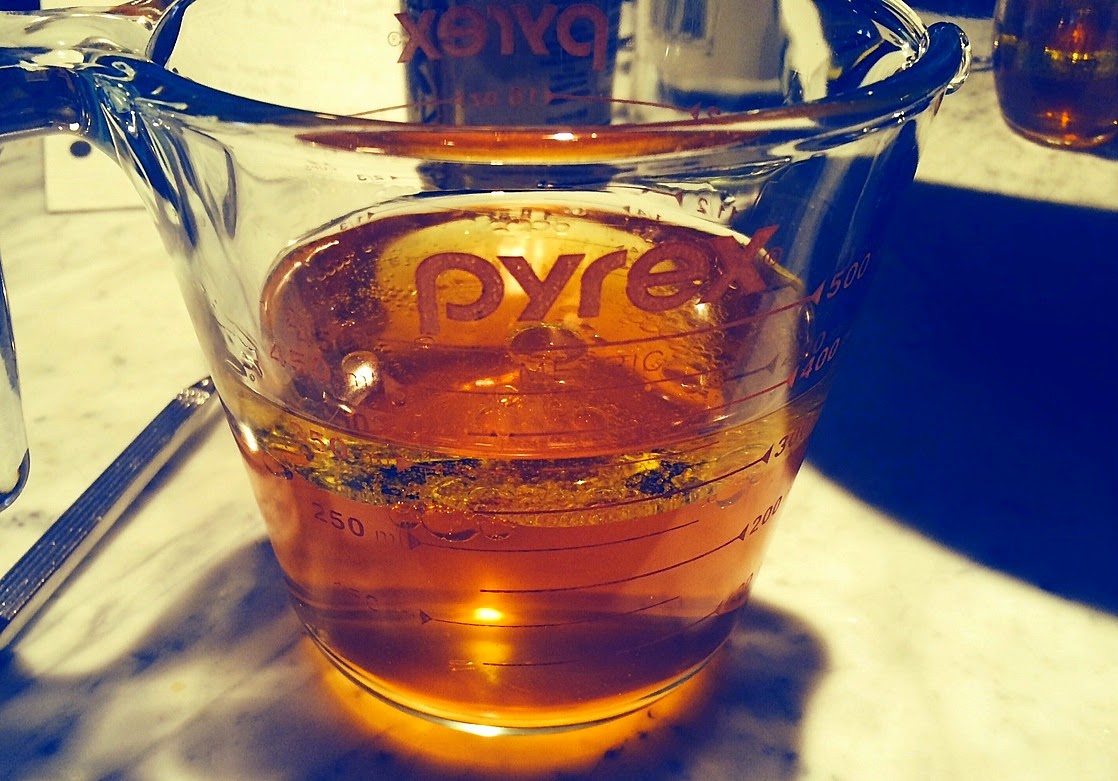 Pour the batter into a greased and floured pan. 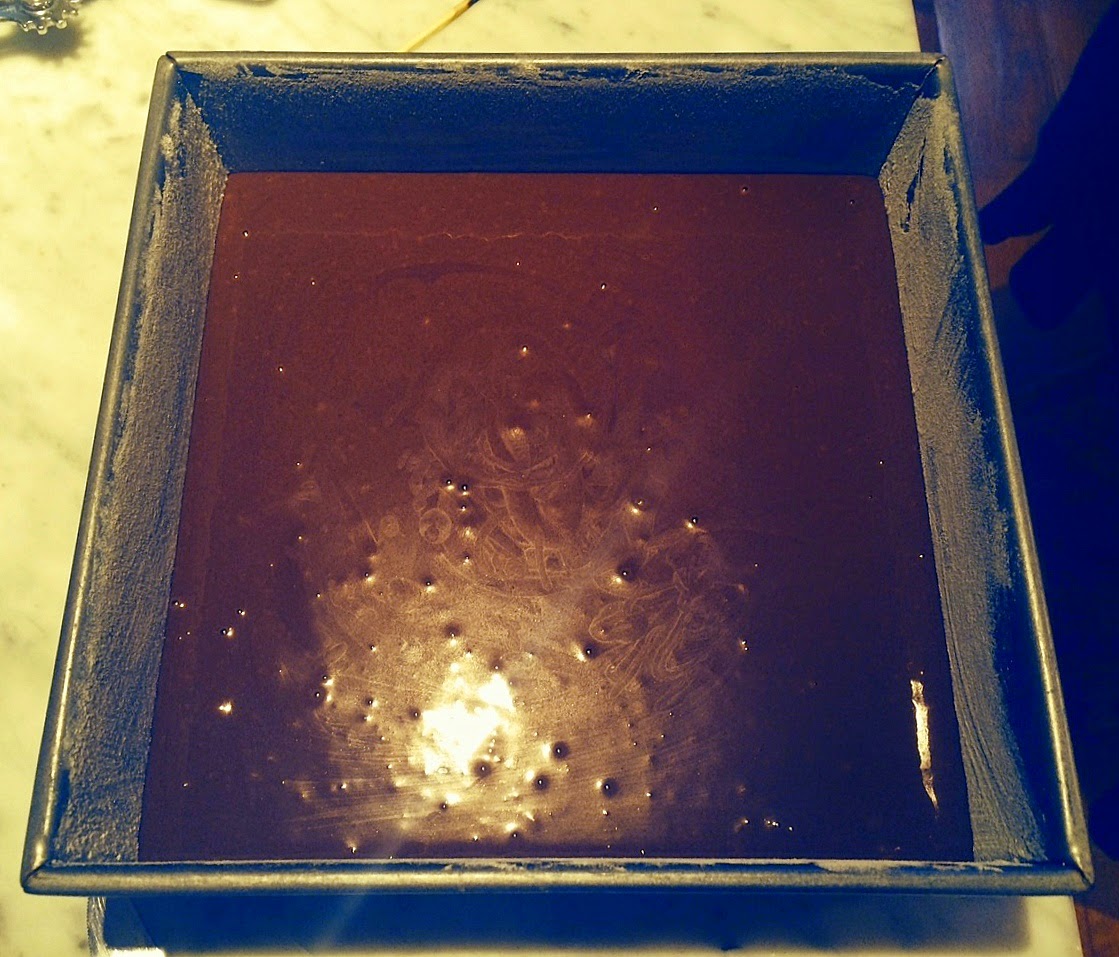 Bake for about 25 minutes. 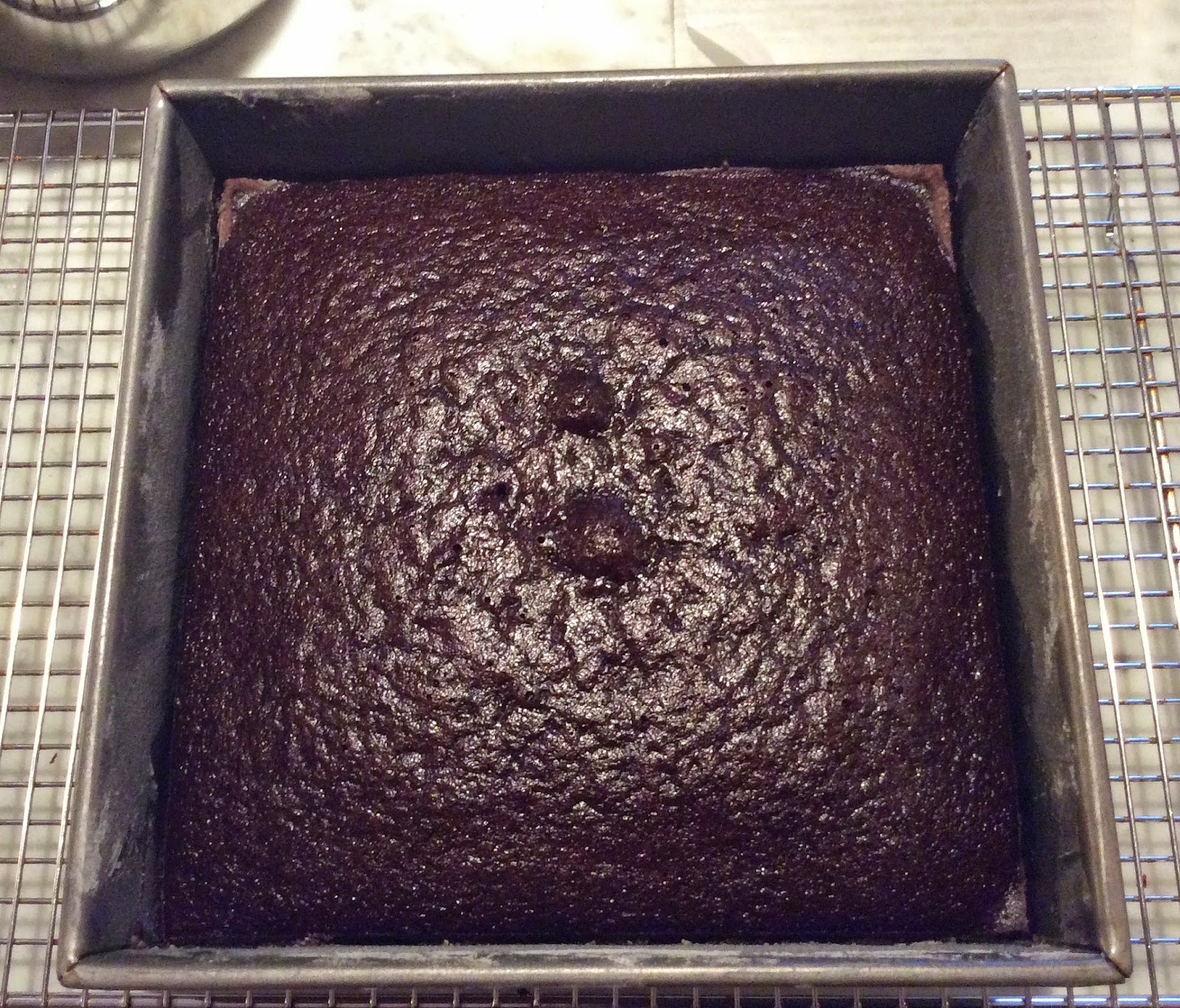 When slightly cool, run a butter knife along the edge and turn out. As you can see below, some of the cake remained in the pan. I just patched it up, flipped the cake over, frosted it and no one was the wiser. 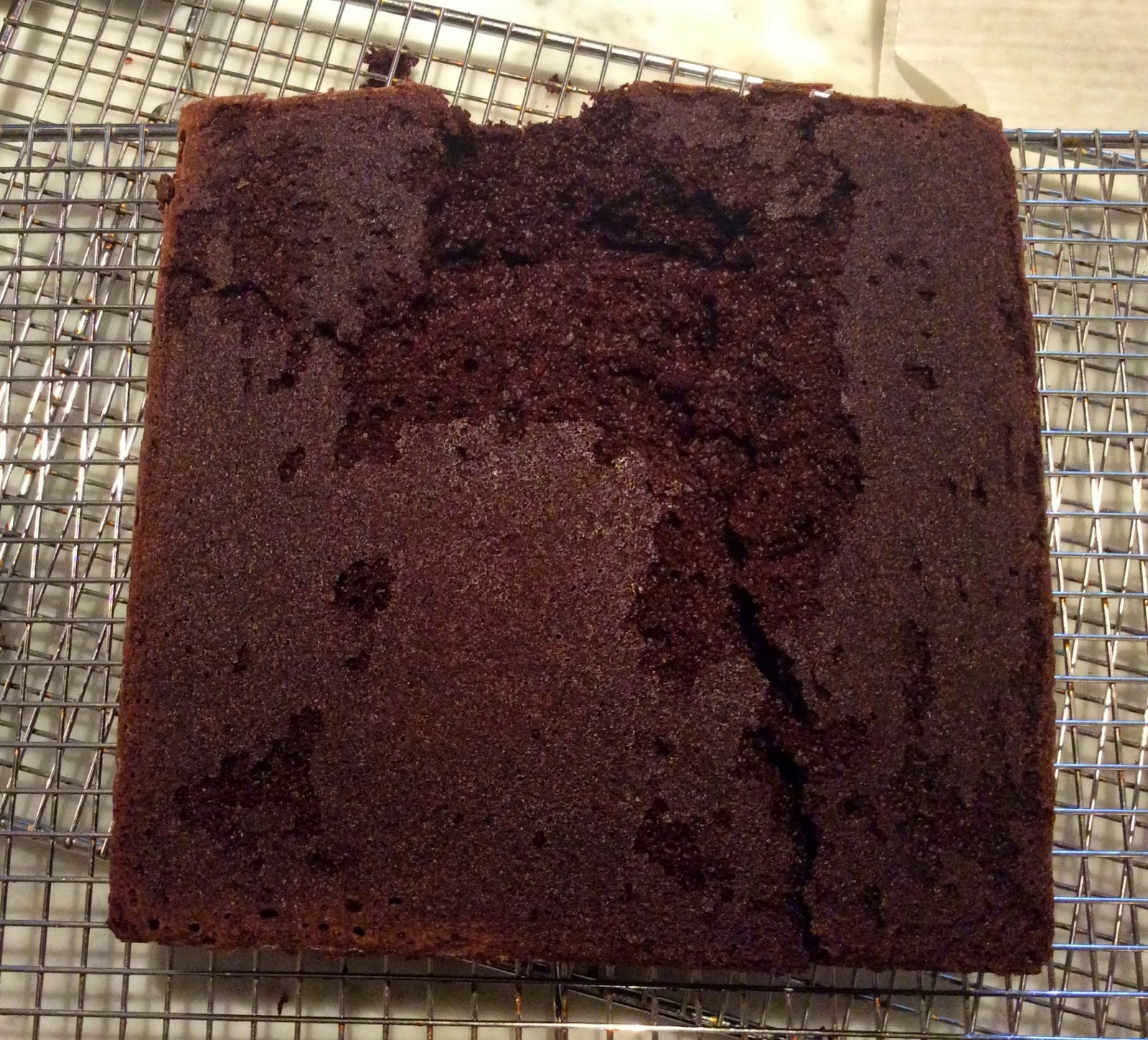 Production notes: I followed this recipe exactly as written. 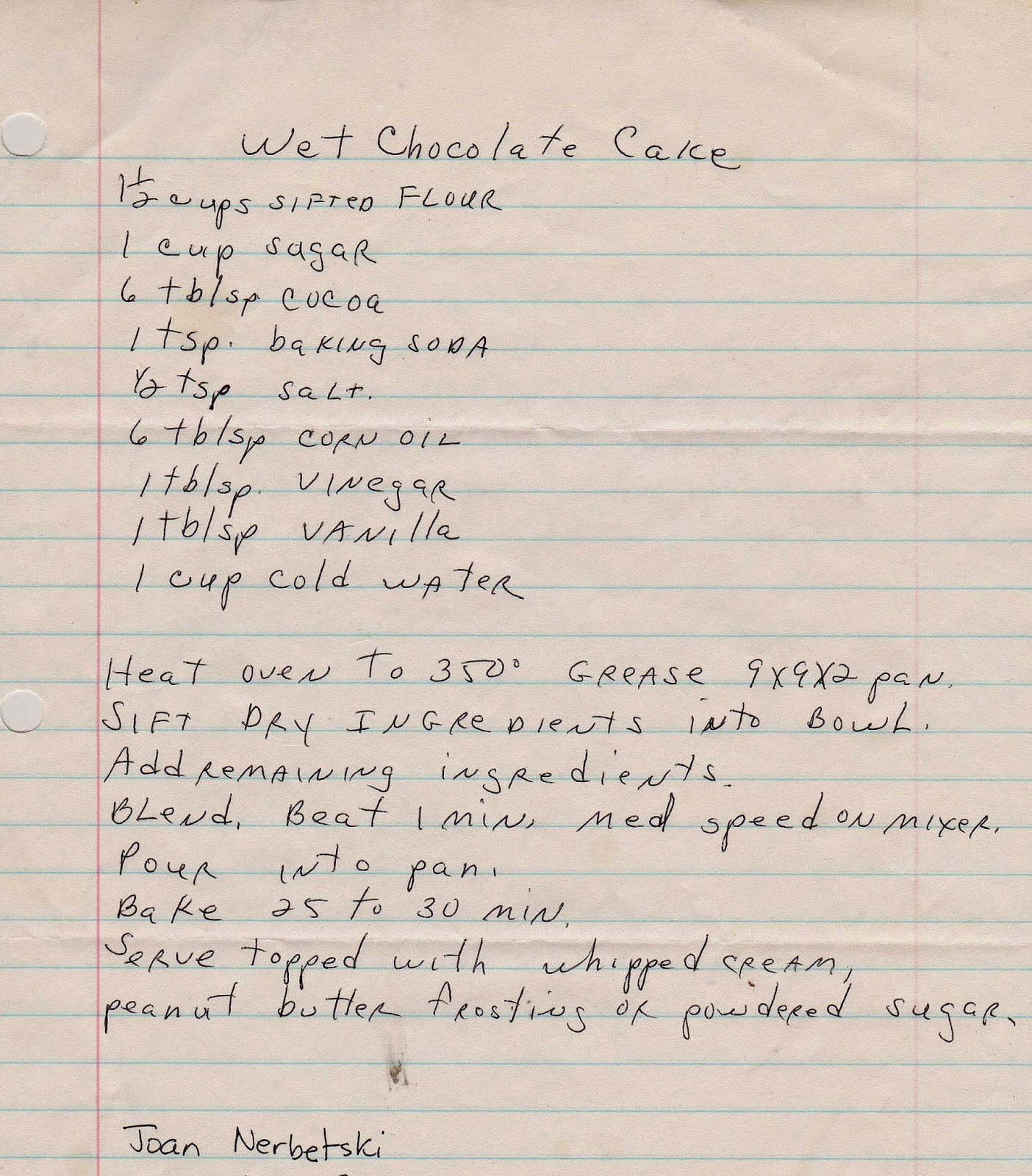 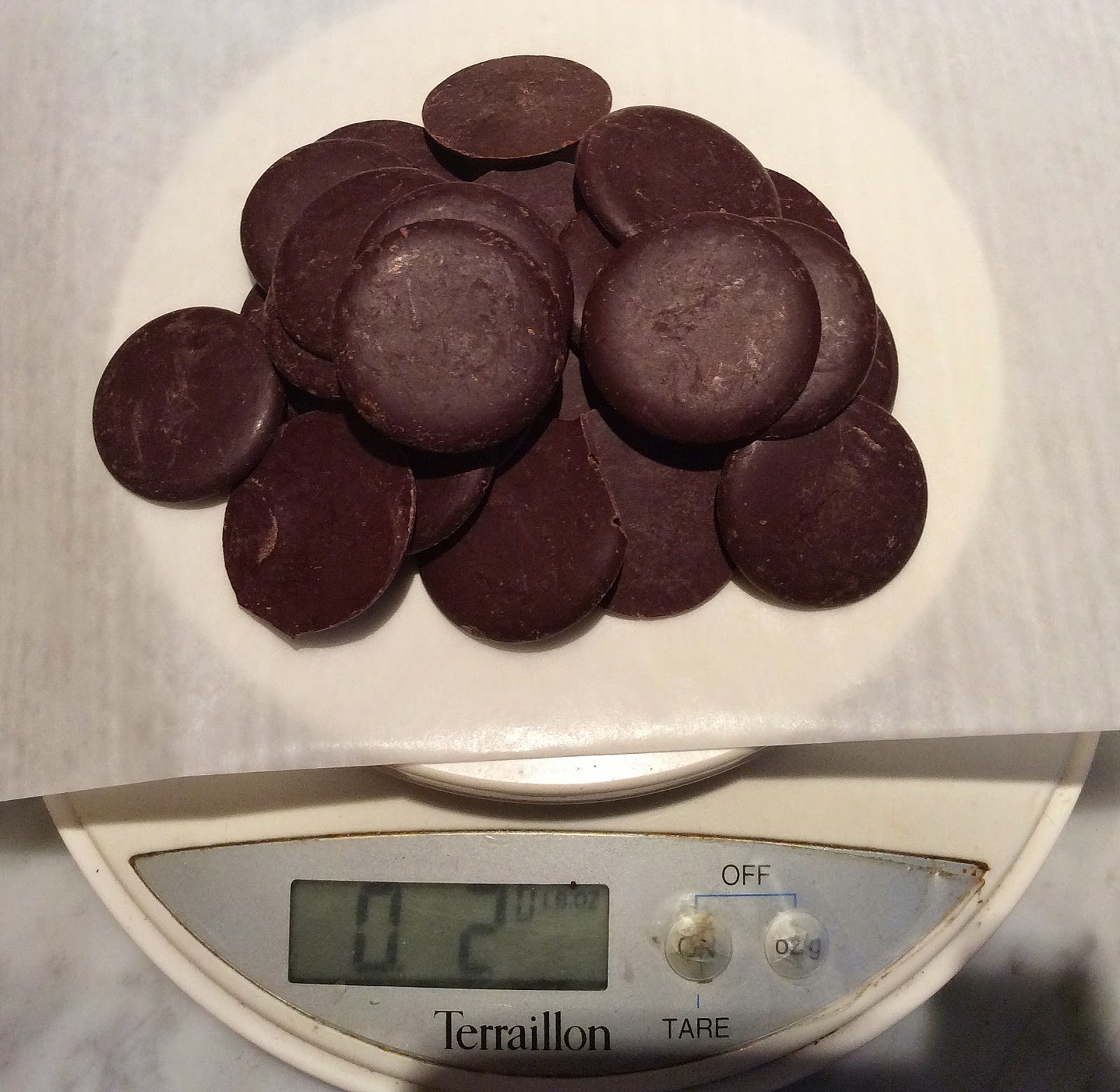 Chop and combine with the sugar and other ingredients. 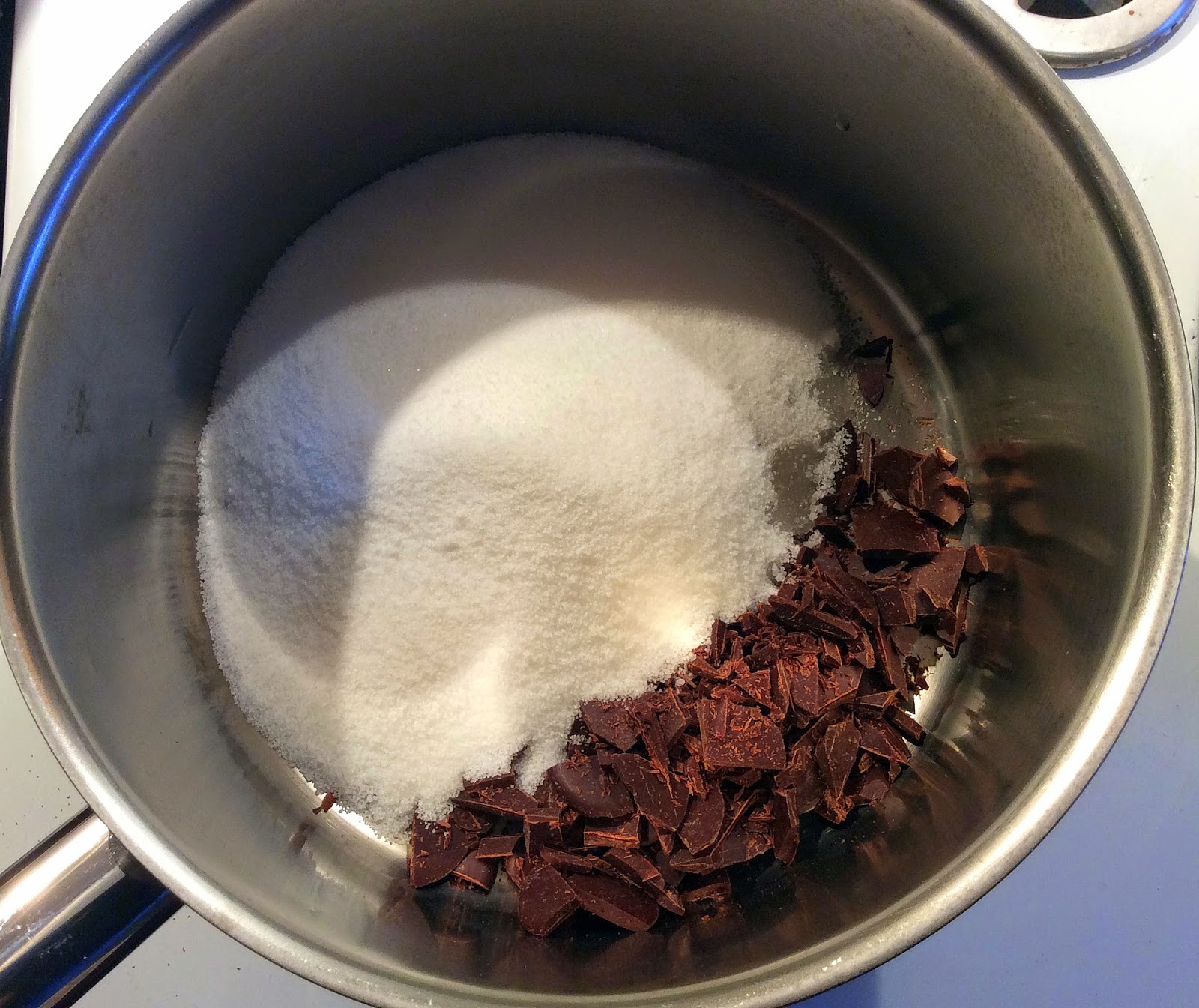 Stir until it comes to a rolling boil and let it rip for one minute. Let cool, add vanilla and beat. 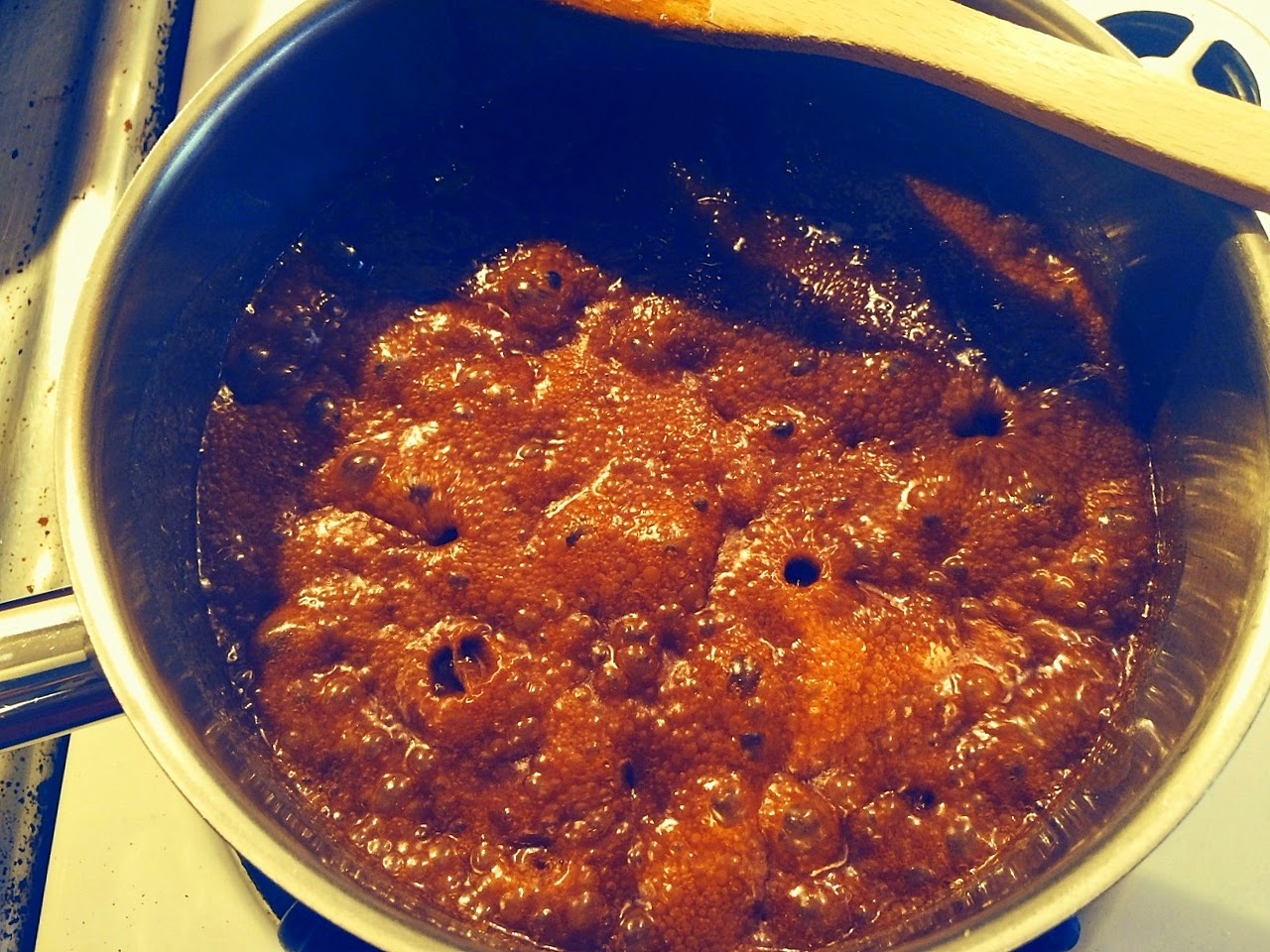 Production notes: I followed this exactly, except I used butter for the Spry and Oleo (6 T in total). Pet milk is any brand of evaporated milk. If you prefer to keep your cake vegan, just top it with a dusting of confectioner's sugar. If you prefer an easier frosting (one that requires only beating, and not cooking and beating, you can use this frosting from the Magnolia Bakery.) 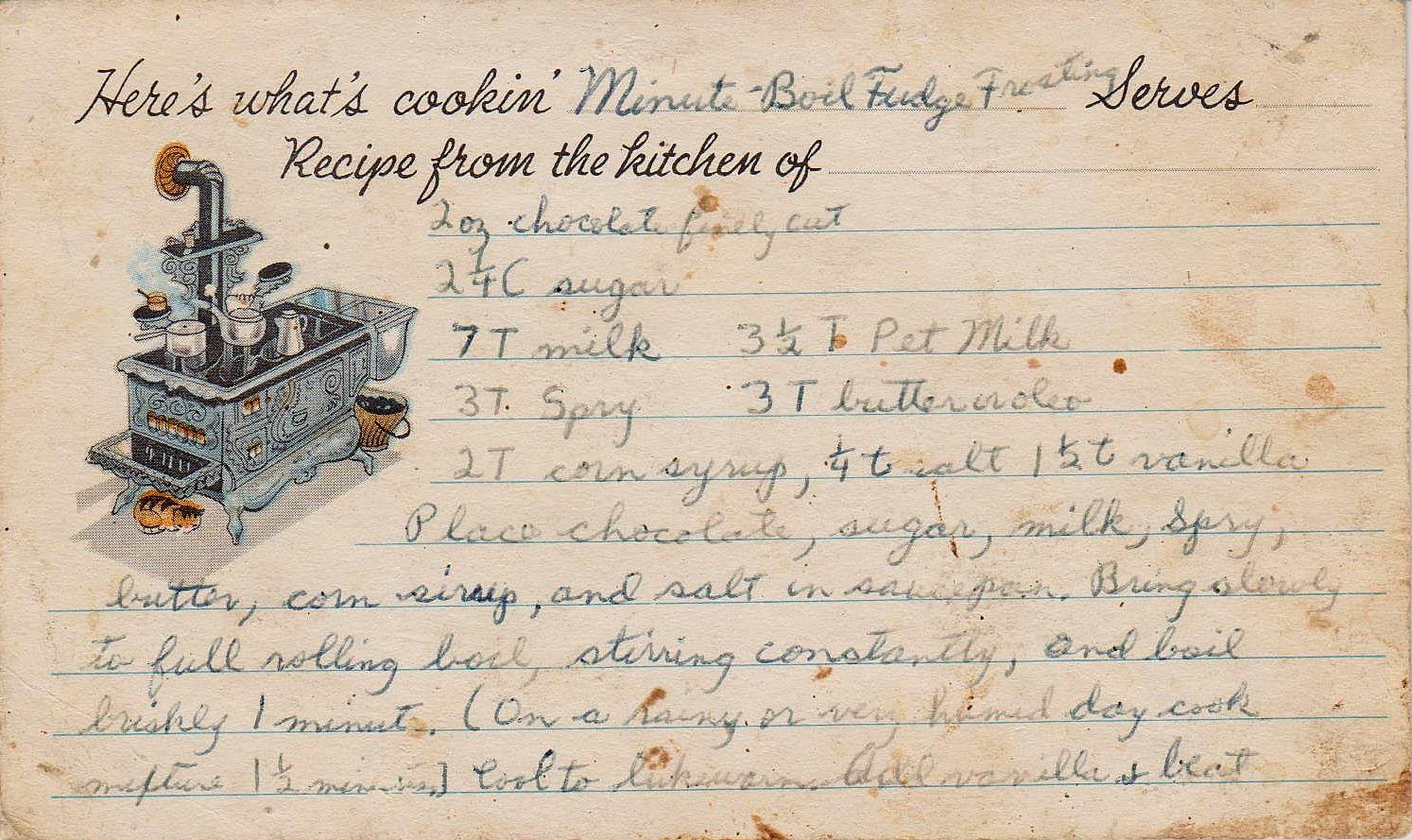 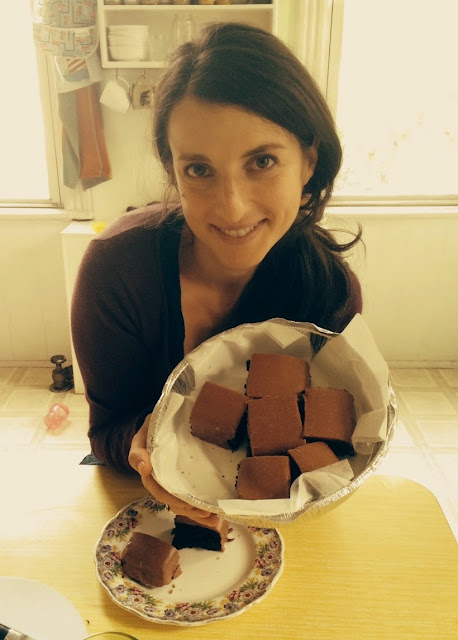