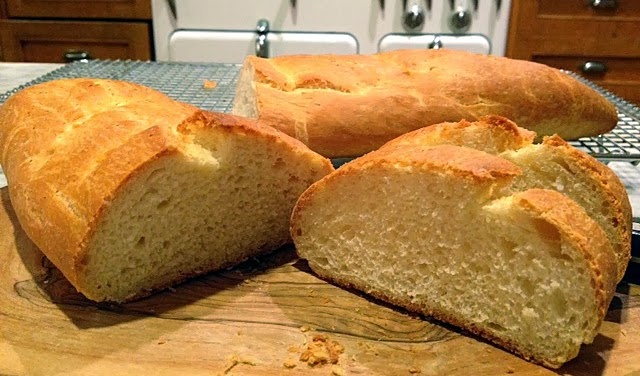 Though I write from Brooklyn and that name is in my blog title, I rarely come across vintage recipes from born-and-bred Brooklynites.  But I did just that a few months ago, at a stoop sale just two blocks from my house.

The story begins last year, when Jackie C. discovered that a house two doors down from her Tenth Street apartment was sold, and the new owner was planning to discard the contents of the basement. Jackie asked if she could have a look.  Once inside, she discovered a treasure trove of items, spanning the whole 20th century, that once belonged to Mae Neis and her sister Grace Johnson. Included was this 1952 Executive Record & Travel Guide that Grace repurposed into a handwritten cookbook, 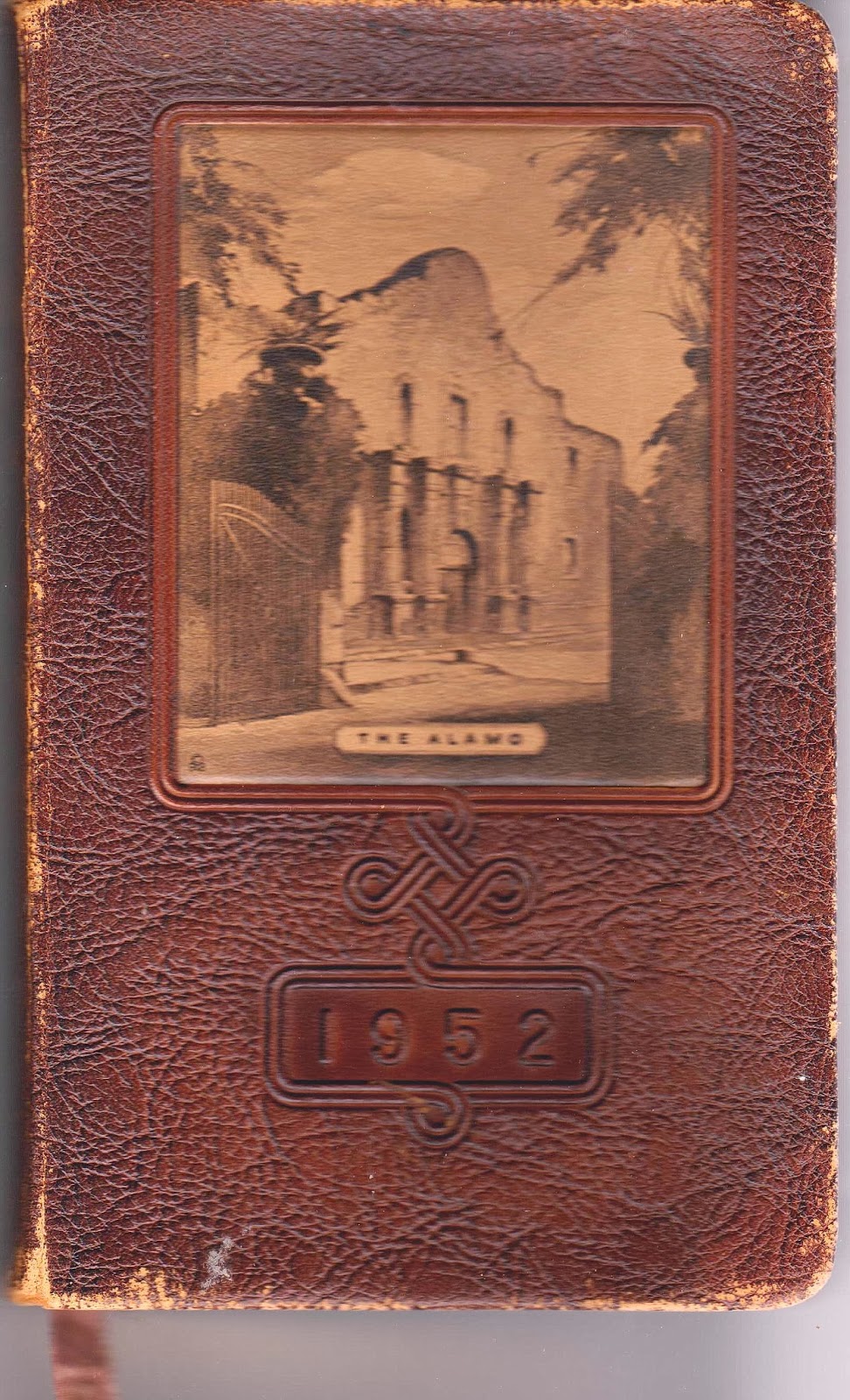 complete with index!  The recipes reflect many of the ethnic groups in Brooklyn at the time: Italian, Jewish, Chinese, Irish, Welch, British, etc. 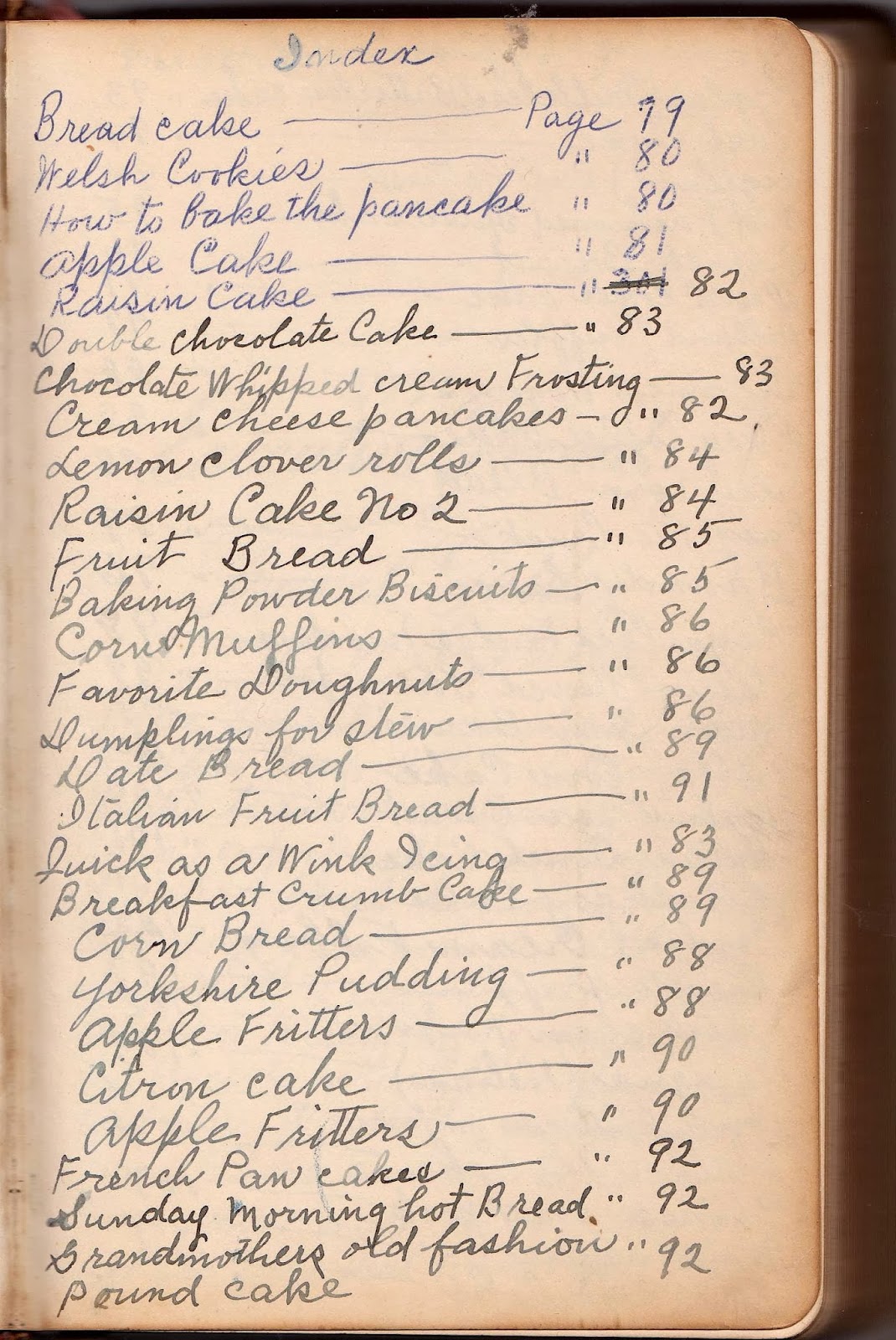 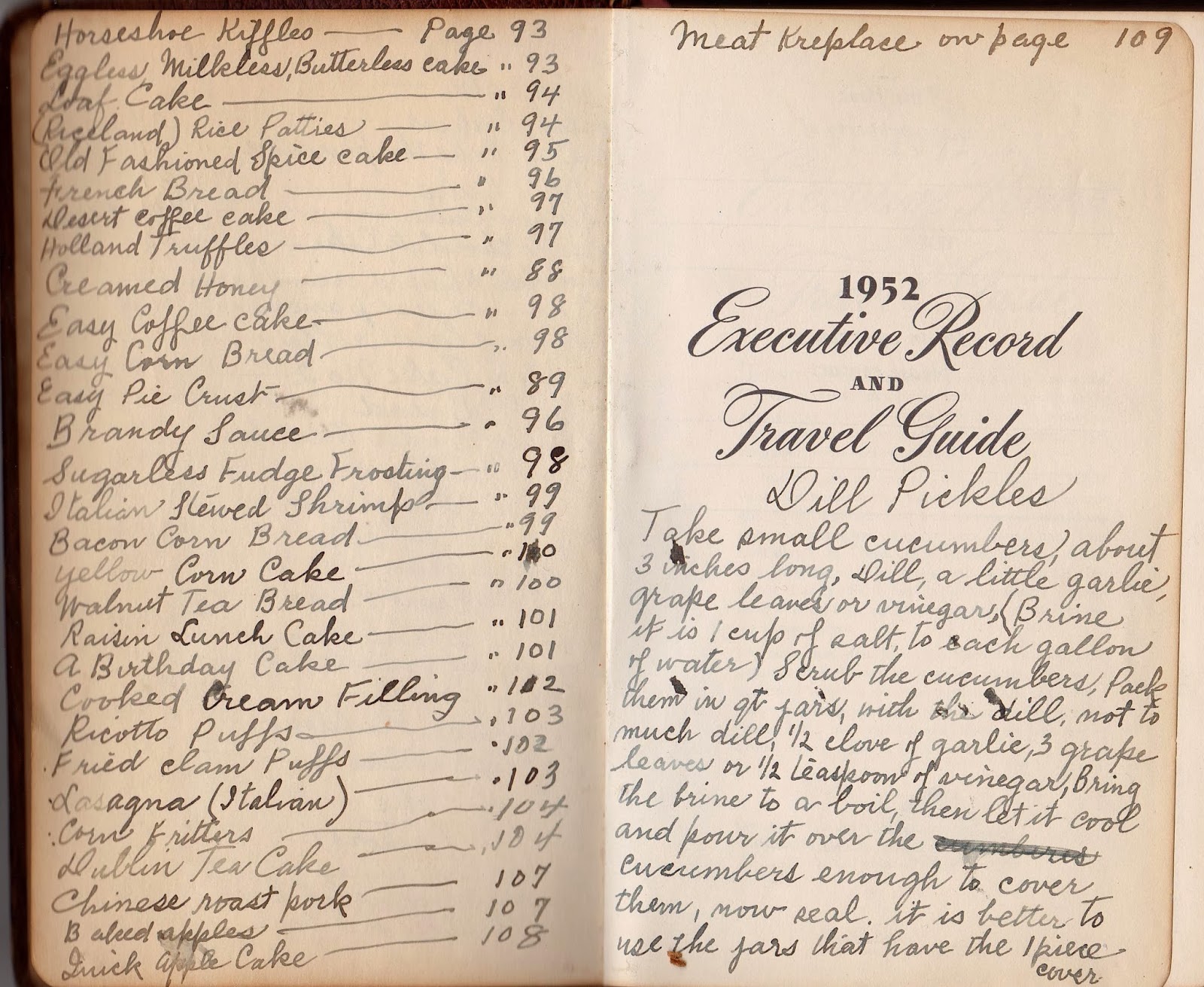 According to Jackie, who spent many hours going through the items in the basement, Grace Johnson was born in 1906, raised in Park Slope, and attended the nearby St. Saviour's School. She worked as a stenographer in the 1920s and married William Johnson, who worked for RCA.  They had no children but entertained and traveled extensively -- Jackie found all the postcards they sent to Mae. She thinks Grace, who was predeceased by her husband, died in the 1980s, and all of her things were inherited by Mae who died in 1991 or 1992.  Jackie, who never met either woman, deduced from Grace's belongings, that she loved to read about astrology and palmistry, play bridge and collect ashtrays and spoons from her travels. She also loved to cook -- there were tons of baking and cooking utensils among her things.  And, of course, this cookbook.

I dove into the cookbook by making French bread.  It's remarkably easy, and quite delicious.
Start by dissolving the yeast and then simply adding all the ingredients into a bowl. 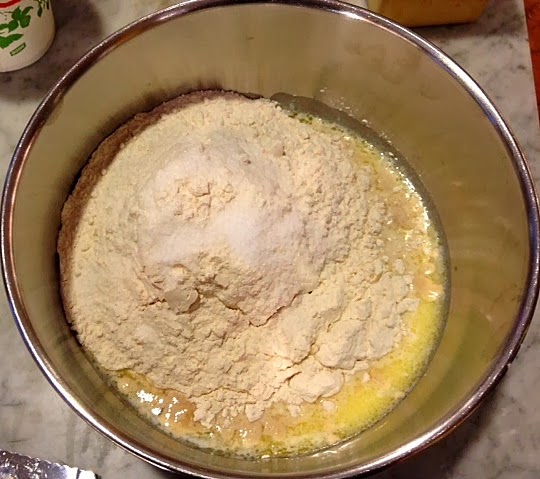 Mix it all up together, and turn out onto a floured board and knead for about ten minutes. 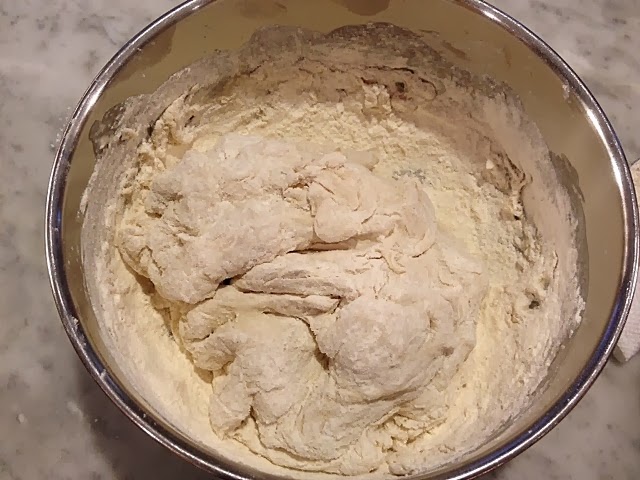 Put the dough into a buttered bowl, cover with a cloth and place in a warm spot to rise until ... 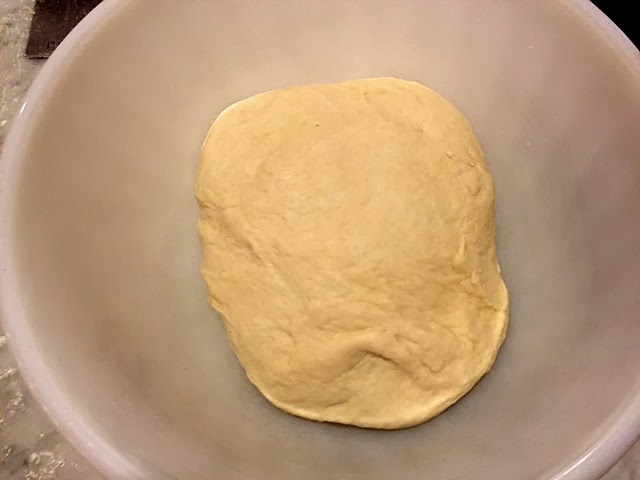 it doubles in size, below. 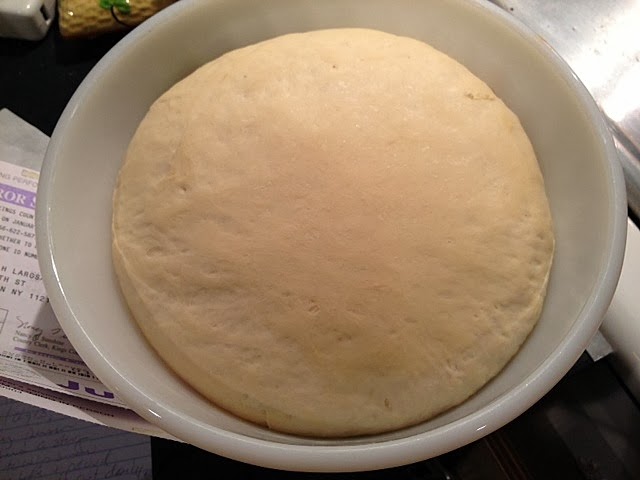 Then, punch it down.  Literally, put your (clean) fist right in the middle of the dough.  Aside from kneading, this is the most satisfying part of bread making.  Oh, and biting into the finished product. 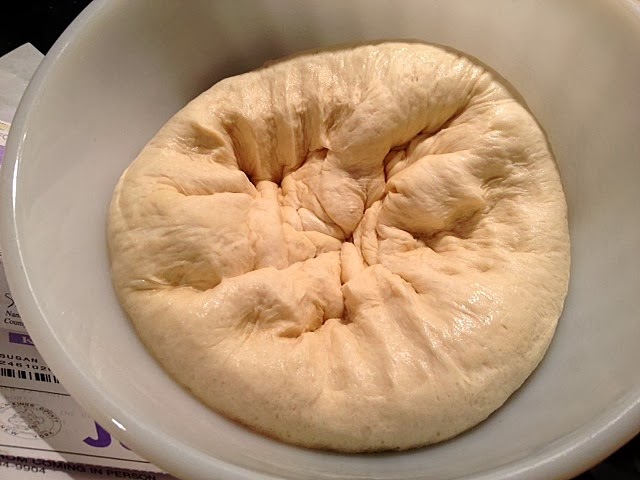 Divide the dough into two balls and form two baguettes.  Slash the tops with a knife. 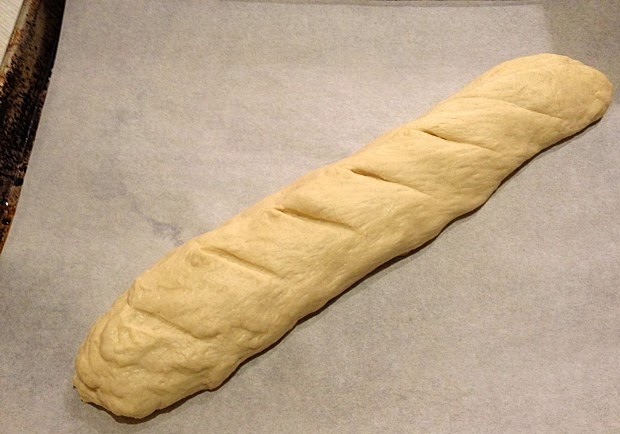 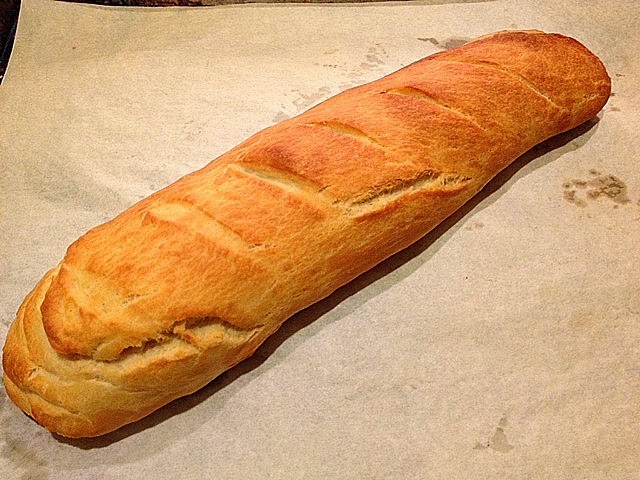 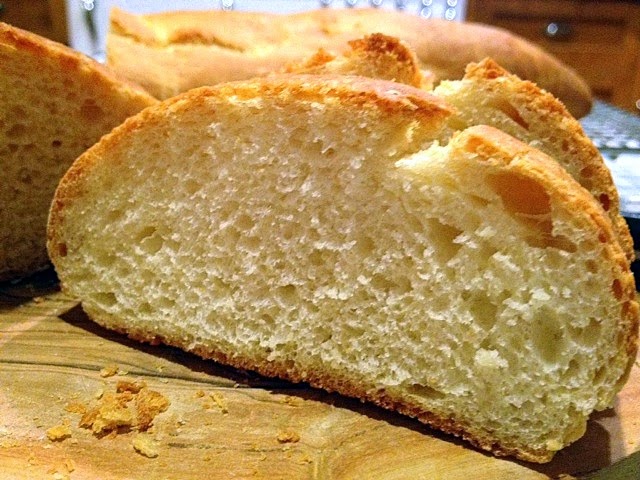 Below, is the recipe as Grace wrote it.  And below that is my modern day "translation." 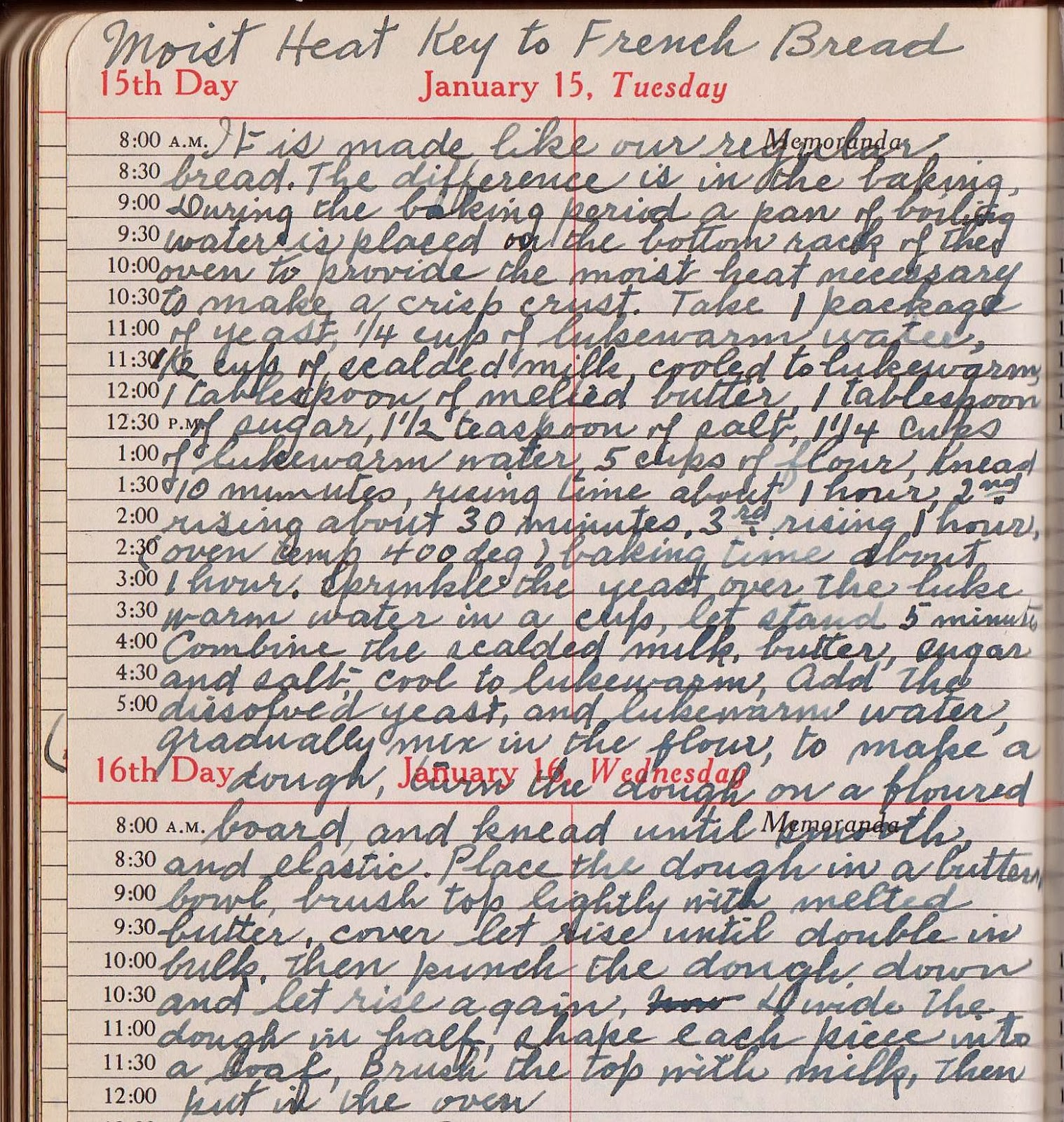 Grace Johnson's production notes: "Moist heat key to French bread. It is made like our regular bread. The difference is in the baking.  During the baking period, a pan of boiling water is placed on the bottom rack of the oven to provide the moist heat necessary to make a crisp crust."

Sprinkle the yeast over 1/4 c. lukewarm water and let stand five minutes.
Combine the scalded milk, butter, sugar and salt and cool to lukewarm.
Add the dissolved yeast and lukewarm water.
Gradually mix in the flour to make a dough.
Turn the dough onto a floured board and knead until smooth and elastic, about ten minutes.
Place the dough in a buttered bowl and brush the top with melted butter.
Cover and let rise until double in bulk, about one hour.
When doubled, punch the dough down and let is rise again, about 30 minutes.
Divide the dough in half and form two long loaves.  Let rise about one hour.
Place a cake pan or similar on the bottom of the oven (or bottom rack) and fill with boiling water.
Brush the tops with milk and bake for about 60 minutes -- but start checking for doneness much earlier.