Local (if you're Canadian) Sweets: The Legendary Nanaimo Bar 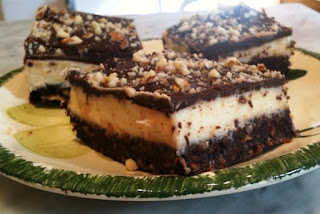 While in Mexico last week, DH and I befriended a couple of fellow travelers staying at our beyond fabulous secluded resort, Rancho Pescadero.   Marina and Nicole (below, l. to r.) not only excelled at my favorite sport --lounging poolside while sipping hibiscus martinis -- but they quickly became my new best friends when they created, by accident I'm sure, DH's new moniker -- Mr. Susan. 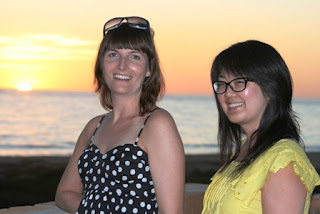 These lovely ladies, both natives of Vancouver, though Marina now lives in Toronto, were intrigued by my blog (not really, but being polite -- or slightly inebriated -- they feigned interest) and told me of the delicious and legendary Nanaimo Bar, named for a city on Vancouver Island.

As soon as I got back to New York, I set about to make some.  Below is the mise en place for the bottom layer.  All the ingredients are pretty universal except for Bird's Custard, a British import, which I used, with Nicole's blessing, in place of the custard powder called for in the recipe.  I've never seen custard powder here. 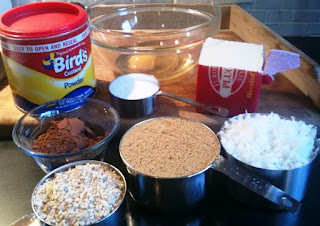 These three-layer treats involve a technique I'd never before encountered (adding a raw egg to the bottom layer ingredients and cooking it all atop a double-boiler), but I'll try anything once, even folk-dancing.  It's a fairly easy recipe, made much easier if you have a small offset spatula with which to spread the second layer over the bottom one.  And it doesn't require any baking --- just a bit of stove-top cooking and refrigeration -- making them an ideal summer dessert.

Don't be intimidated by the need for a double-boiler.  Simply put some water in a saucepan and put a bowl on top (the bottom of the bowl must not touch the water) -- voila, your own custom double-boiler!  Below, is the one I created to melt butter and chocolate for the topping. 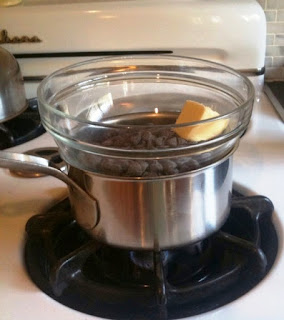 These bars are quite good, quite sweet and a bit unusual, so definitely worth the effort.

Nicole kindly sent me a link to the official Nanaimo website, where I found the following history and recipe.
The Legendary Nanaimo Bar

According to local legend about 35 years ago, a Nanaimo housewife entered her recipe for chocolate squares in a magazine contest. In a burst of civic pride, she chose to dub the entry not "Daphne's Delights" or "Mary's Munchies", but "Nanaimo Bars". The entry won a prize, thereby promoting the town as much as her cooking. Some American tourists claim sovereignty over the dessert, referred to as "New York Slice" which is sold in many other places in the world. Nanaimo residents refuse to accept this theory, however, believing that once you set foot on Vancouver Island, there are no other places in the world. The official Nanaimo Bar recipe was available as a handout as well as on quality tea towel and apron souvenirs.

In 1986, Nanaimo Mayor Graeme Roberts, in conjunction with Harbour Park Mall, initiated a contest to find the ultimate Nanaimo Bar Recipe. During the four-week long contest, almost 100 different variations of the famous confection were submitted. The winner: Joyce Hardcastle.

Melt first 3 ingredients in top of double boiler. Add egg and stir to cook and thicken. Remove from heat. Stir in crumbs, coconut, and nuts. Press firmly into an ungreased 8" x 8" pan.

Melt chocolate and butter overlow heat. Cool. Once cool, but still liquid, pour over second layer and chill in refrigerator.  (I sprinkled the tops of the bars with crushed almonds, only because I had some left over from the bottom layer.  Not necessary, but a nice touch.)
Posted by Susan at 10:29 PM