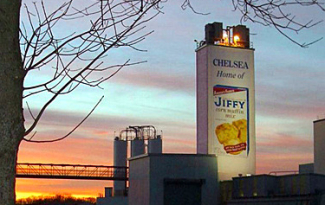 Want to feel really good today and have your faith restored in the food business?  Read this.

A Cake Bakes generally avoids prepackaged mixes, but I couldn't resist sharing this fabulous article about the Jiffy mix company, written by Cory Suter, a Ph.D. student at Temple University. (Not to mention that one of my favorite family Thanksgiving recipes calls for a box of Jiffy corn muffin mix.)

The story, which originally appeared in Policymic.org, is pasted below.  Link is at the end of the article.


7 Reasons This Muffin Mix Can Save America

"Cory, My name is Howdy Holmes; I'm the CEO of Jiffy mix. Why don't you give me a call at ...." I could hardly believe my ears. There on my non-smart phone voicemail was a message from a Formula Atlantic Racing Champion-turned-CEO of the $100 million per yearmarket-leading company in prepared baking mixes. What could I possibly have done to deserve this honor? I simply had written a short note complaining that I preferred the flavor of real blueberries to the artificial ones in their muffin mix.
Anyone who has dared venture down a grocery store's baking aisle or opened their grandparent's cupboard has probably seen one of the timeless white and blue "Jiffy" boxes that haven't changed much since the mixes were first invented by Holmes' Grandmother in 1930. What I didn't know until I did some homework, was just how great of a company is behind Jiffy mix. After a 16-minute long chat with the Jiffy mix CEO, and 11 years of studying business and economics, I knew I had discovered one of America's last great businesses. Here is seven reasons why:
1. Jiffy mix sells over 55% of all muffin mixes in the United States, but doesn't spend a dime on advertising.

While Jiffy competes by selling quality products at the lowest price (40 to 60 cents for corn muffins, for example), most American companies now try to sell their products by making people feel inadequate.
"Buy our products, or you won't be happy or sexually fulfilled" is the implicit message that lies to us each time we turn on a TV or catch up on the latest news. Instead of trying to convince us what we should want, Jiffy simply does the right thing, and works to meet a genuine need for convenient wholesome food. The 30% to 52% off the final price that Jiffy saves not advertising or making flashy packaging is directly passed on to customers in the form of unusually low prices.
2. Jiffy mix denies Wall Street a chance to make money from other people's work.

Wall Street finance has increasingly morphed from being a source of investment in America, wisely allocating scarce resources, to being a predator "landlord" that makes money off of other people's work. Jiffy mix is a family-owned business that has repeatedly refused debt-financing and lucrative offers to hand the business over to a corporate conglomerate backed by a big bank. As CEO Holmes said in our phone conversation, "I didn't want a 28-year-old brat from Wall Street telling me how to run my company."
For Holmes, keeping local control of the company is about much more than stubbornness or pride. Keeping Jiffy mix away from the financial elites is a major contributing factor to their customer loyalty, and the quality of life in their neighborhood.
3. Jiffy mix management treats their employees the way they would like to be treated.

Not only does the CEO know most of his 350 employees on a first-name basis, he also has compensated them well, including giving some stock-ownership in the company. With an average salary for a production worker of $47,000 per year, the median family income in the little town where Jiffy mix is $72,266, which is $20,000 more per year than the median U.S. family income. While a Wall Street investor would want to lower this "unnecessary" labor expense, Holmes believes caring for his community and workers is what good business is all about.
4. Jiffy mix genuinely serves their customers needs, instead of being obsessed with profit.

Almost any analyst could tell you that Jiffy mix could make more profit by raising their prices. However, as CEO Holmes explained to me, "Most Americans don't have two homes or much extra money to spend on things that aren't necessary. We provide high-quality ingredients at the best price to help as many customers as possible." From an economist' perspective, raising prices close to the level of competitors would maximize profits, but it would also erase an even larger amount of consumer surplus, thus creating a dead-weight loss for society.
5. Jiffy mix staff find meaning and purpose through their work.

When I commented on Holmes' decision not to sell off even part of his multi-million dollar company, he said "What would I do if I sold-out? Spend my life vacationing somewhere?!" The CEO of Jiffy has the right attitude. Our occupations, in balance with our relationships, give our lives meaning. To work a job just for money or to escape from community and family responsibilities is shallow at best. A visiting reporter from Fortune magazine described Jiffy mix as "a decidedly chipper workplace, with friendly employees who seem to be genuinely enjoying their jobs. They greet Holmes warmly, he appears to know virtually all of them by name, and none of it feels phony."
One of the saddest trends in American culture today is the growing disconnect between making money and producing value. Many of our best and brightest minds shuffle paper and money for financial institutions to earn big salaries, while the real creators of wealth — bakers, builders, farmers, inventors, teachers, designers, and doctors are loaded down by debt. Jiffy mix is a welcome trend-breaker. According to CEO Holmes, "Our staff puts more emphasis on internal and external relationships than we do on completing tasks. This is very different from most companies ... Our dedication to strong family business values, combined with real world professionalism has us uniquely situated for the 21st Century."
6. Jiffy mix is honest.

Instead of hiding their cost-cutting techniques in the small print ingredient list, Jiffy announces on the front of their Blueberry muffin mix package that their product is "artificially flavored with imitation blueberries." This behavior is a clear contrast to Betty Crocker's Premium 'Wild Blueberry' muffins that cost more than twice as much as Jiffy mix, but douse  their "real blueberries" in high fructose corn syrup and artificial flavors. Holmes told me that Jiffy mix "has even won accolades for being more honest than required in packaging our products."
7. Jiffy mix makes long-term decisions to benefit future generations.

With no concern for investor's short-term expectations of profits, Jiffy mix just invested over $6 million into a new research and development facility as part of their plan to keep the company going for many more generations. While other American corporations do invest in research, this essential business function is declining in the United States. CEO Holmes has concluded that long-term thinking is one of the key differences between family-owned businesses and other companies.
Final thoughts
One of the world's most widely recognized ethical standards is to do to others as you would have them do to you. By separating the owners and executives of companies from the communities where these same companies do business, the corporate structure of business has increasingly lost sight of this traditional American ethic. Cutting employee benefits and jobs to enrich Wall Street has become almost as common as hidden fees,  and hiring lobbyists to gain unfair competitiveadvantages.
Small businesses and exceptional American companies like Jiffy mix, built our country'sonce-broadly shared prosperity. Sadly, thanks to Wall Street greed, large civic-minded companies are a dying breed. If all companies were as ethical as Jiffy mix, then most Americans could support the far right agenda to get rid of all the regulations. The best solutions are, of course, not so simple. We need commonsense protections from corporate abuse at the same time we need to scale back regulations that exist primarily to give big businesses advantages over competitors. Because, so few companies are like Jiffy mix, America needs a smart government of the people, by the people and for the people.
http://www.policymic.com/articles/30626/7-reasons-this-muffin-mix-can-save-america
Posted by Susan at 7:25 AM