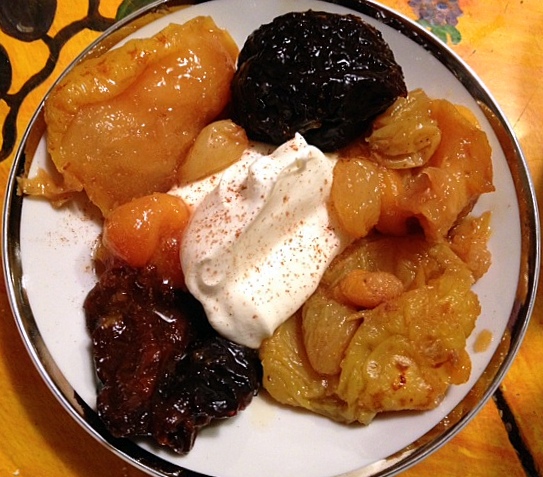 Today's post is courtesy of A Cake Stews in Brooklyn, for that's how this old-fashioned fruit dessert is prepared.

Fruit compote (beautifully plated above with a dollop of whipped cream by head chef and danseur  extraordinaire Antonio Carmena) was served at last night's installment of The Ballet Dinner Cook Book Series, in which a group of us are cooking (and laughing and crying) our way through 1966 The Ballet Cook Book, a compendium of recipes of the biggest names in ballet, collected and published by Tanaquil LeClercq, a New York City Ballet dancer and George Balanchine's fourth wife. (Can that last sentence be any longer?)

Last night's meal featured the recipes of Canadian-born Melissa Hayden, "one of American ballet's greatest ballerinas," according to the The New York Times.  Hayden, who danced for both the New York City Ballet and American Ballet Theatre, contributed recipes that reflected her Eastern European heritage.  (You can read about the entire menu once the Series originator, Ryan Wenzel, and Carmena publish their blog posts.)

The pressure was on last night, as Hayden's son, Stuart Coleman, was one of our guests and had enjoyed many of these dishes while growing up.  But we needn't have worried, for Stuart's portrait hangs in our Hall of Fame under the heading:  "Most gracious and nicest guest."  His partner, Renaissance woman Meryl Rosofsky's portrait is right there next to his. (I got the feeling that even if we had served them something inedible, they would have been equally gracious.)  But one thing that came through loud and clear was the extraordinary love Stuart has for his mother, who passed away six years ago, and the opportunity to connect with her through her recipes.)

Now, on to the dessert, chosen because it was the only dessert in Hayden's chapter.  Fruit compote was served at every family holiday meal during my childhood, but I'd never made it.  It's very simple -- buy high quality dried fruit, soak overnight and simmer it for about 15 minutes.  It's quite delicious, even if it's not beautiful.  It helps to have Antonio in the kitchen, below, and not only for his ability to plate. 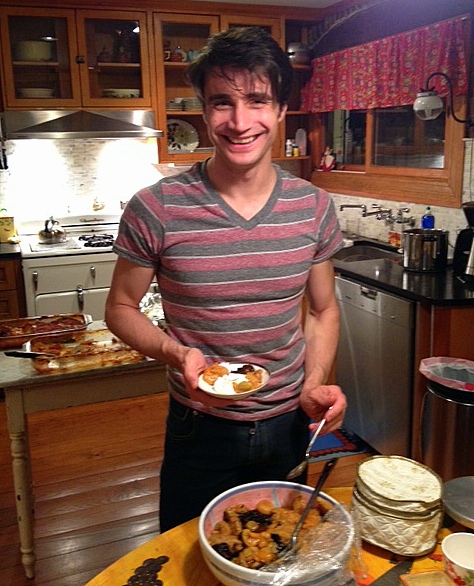 Start with all the fruit -- except the pears -- in water to cover.  Soak overnight. Hayden's recipe is much more gourmet than my family's on account of the pears and the addition of lemon peel.  (The recipe is at the end of this post.) 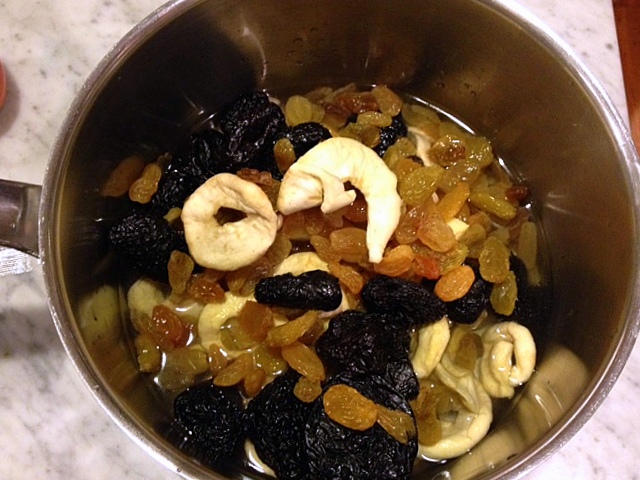 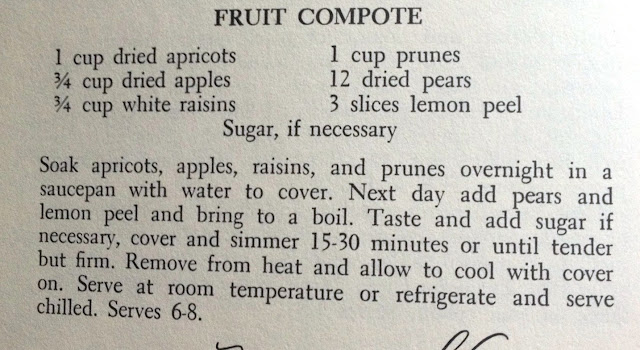 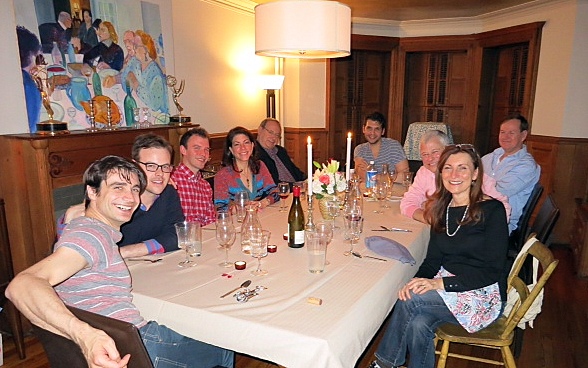 The dinner group, taken at the end of the meal.  From left, going clockwise: Antonio; Jeff Gageby, who has become quite the sous chef and whose all-around help is invaluable; Ryan, Meryl, Paul Epstein, a longtime family friend of Hayden's and Stuart's; Michael Pereira, Antonio's lovely partner who keeps us all honest and entertained in the kitchen; Garry Parton, Paul's partner; Stuart, and me.
(Photo taken by the long-suffering DH.  Thanks, Paul!)

And below, is Antonio's fabulous video of the event.  Be sure to watch until the very end to see the amusing outtakes.