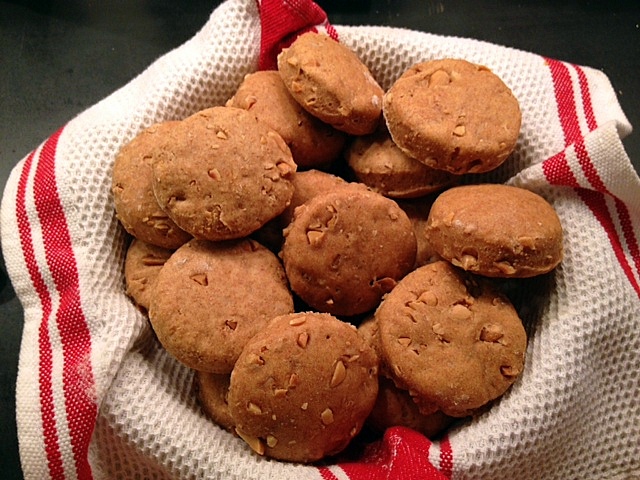 On Saturday, I had a genius in my house.  His name was Kerlan and, in just a few minutes, he repaired my oven and saved my sanity. My oven had been unreliable for months (leading to a lot of sobbing over failed cakes);  the three previous repair techs sent by appliance company were flummoxed.  Kerlan didn't fix the problem with the tools he brought or by fussing with one of the five computers in the oven (who even knew ovens had computers?).  He did it by thinking:  using logic and reason, he arrived at a hypothesis that made sense.*

This is a long way to get to these excellent and unusual peanut biscuits, but after Kerlan left, and upon his advice, I began testing his theory by baking. And baking some more.  First up were savory peanut biscuits -- easy and delicious.

You'll need to chop up some peanuts.  I used my brand new knife, a life changing purchase, that I got from Cut Brooklyn.  Even bakers need good knives. 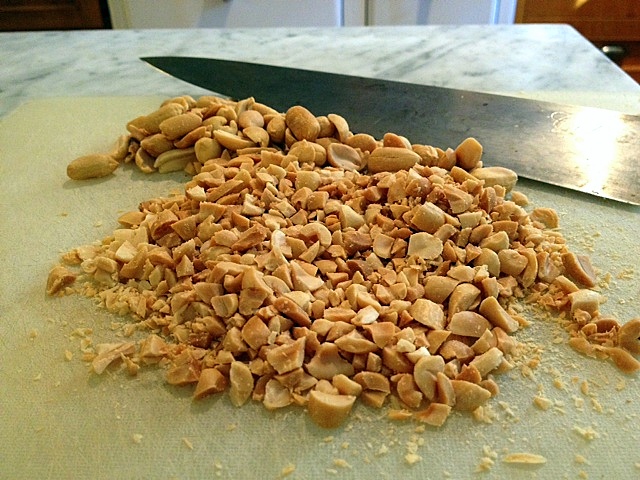 If you like crunchy peanut butter, you will love these biscuits.  They would also make a fine addition to the school lunchbox, something I haven't packed up in many years (and don't miss doing at all, thank you very much).  The recipe, hand typed in Mrs. Grace Osborn's Cakes of Quality book, dates from the early 1900s.

The biscuits deliver a double punch of peanut flavor, from both the peanuts and peanut butter. 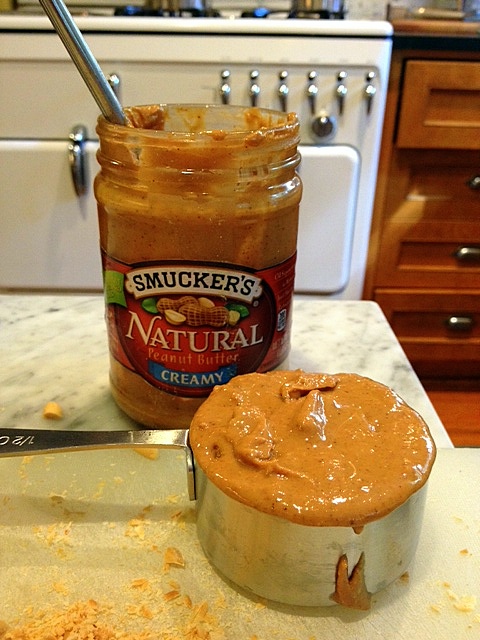 The recipe calls for eight teaspoons of baking powder.  I kept count by placing each in a separate area atop the graham flour, below. 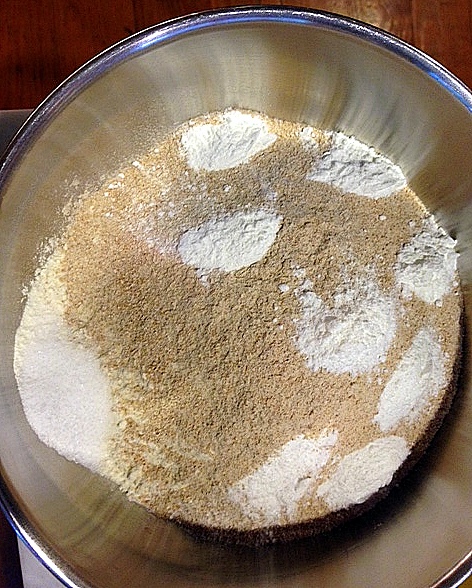 This makes a very sturdy dough, which is a good thing because you need to roll it out.  I used a bit of extra flour to insure it didn't stick to the rolling surface. 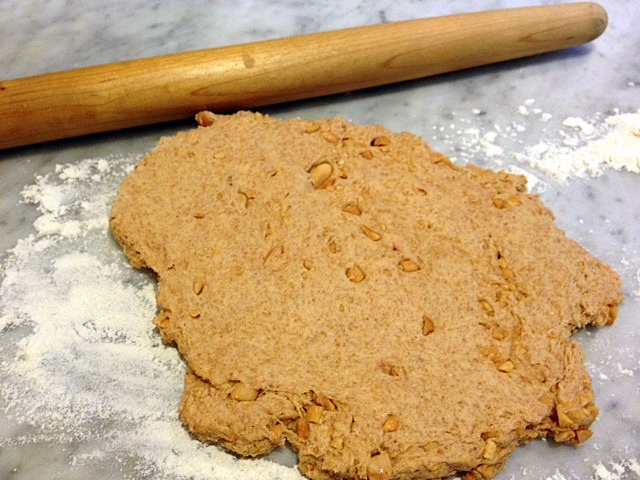 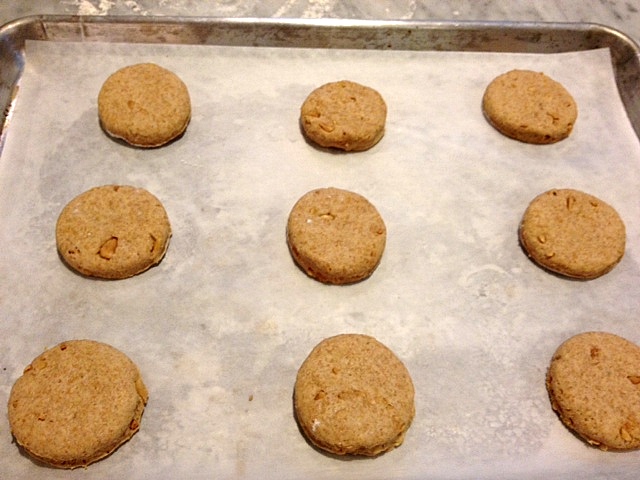 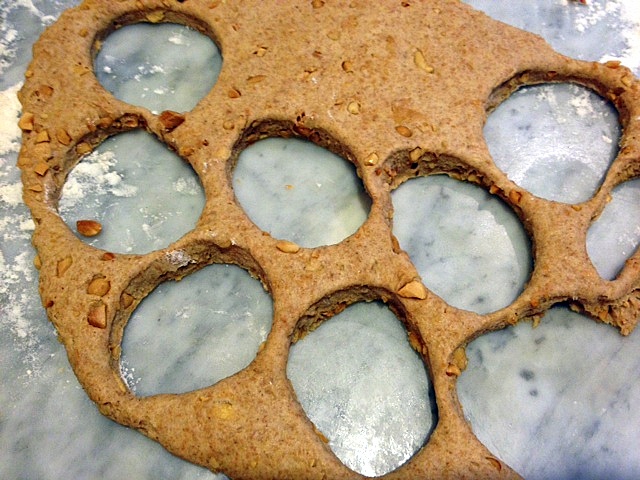 This dough is fabulous raw. Do try some before baking. 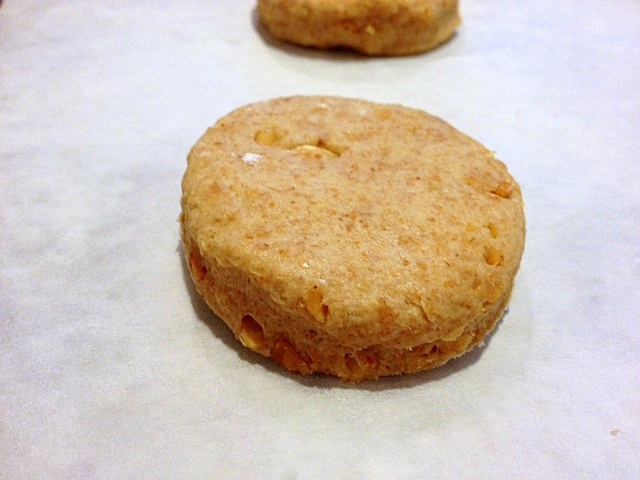 After baking, let them cool on a rack, though no one will mind if you have one hot from the oven. 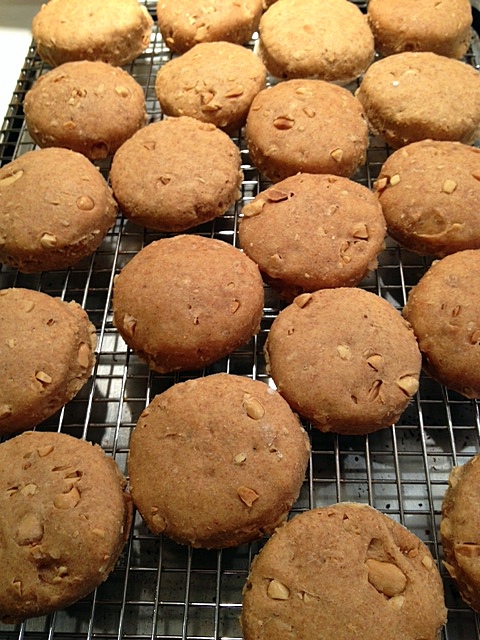 The best way to enjoy these biscuits is by creating a new twist on the PB & J.  The biscuits serve as both the bread and the peanut butter -- just add jelly.  I was lucky enough to have a jar of delicious homemade jam given to me by the fabulous food stylist Cyd McDowell who, if she was in my kitchen on Saturday, would have made this (and all the other photos) look much better. 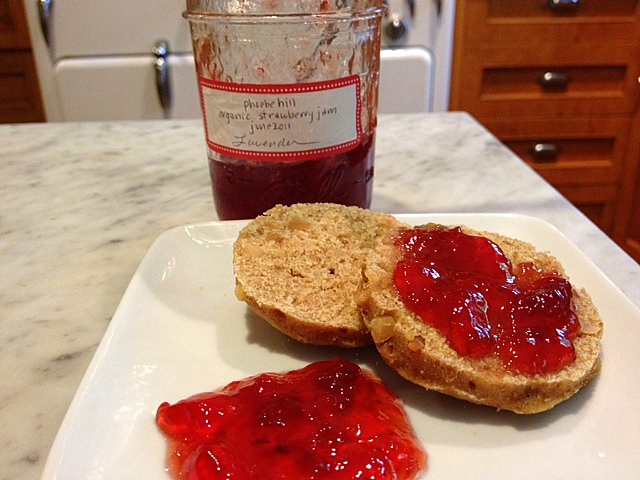 The recipe is below.
Some production notes: I used graham flour, which is pretty easy to find these days in those Red Mill displays.  I assume that "entire wheat flour" is similar to what we today call whole wheat flour.
I found it difficult, if not impossible, to dissolve the peanut butter in cold water, so I combined the two in my standing mixer and let it rip.  And then I added the dry ingredients to the peanut butter mixture.  Worked fine.
I set the temperature at 400 degrees and baked them for about 11 minutes each. 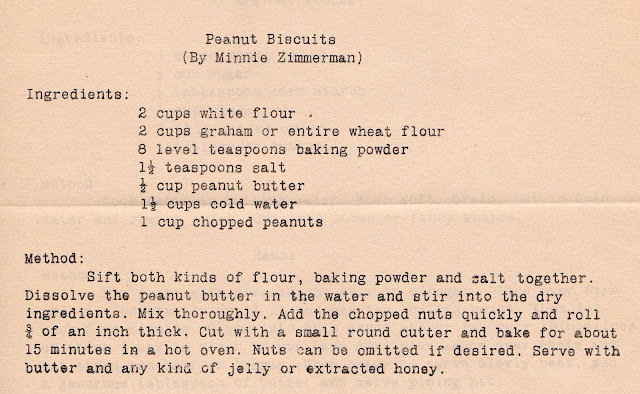 *For those interested in the denouement of the oven story:  So, my oven would work sometimes, and completely fail others.  In fact, the only time it was guaranteed to work was when the repair techs were there (which made me feel like I was being gaslighted even though the oven is electric). Kerlan heard my tale of woe and figured out that the oven door was not shutting properly, even though it looked like it was shut.  This would explain why the oven worked only intermittently, i.e., when the door happened to shut correctly, the oven would attain and hold its temperature, but when it didn't, that would explain why it would stall at say 183 degrees and never heat up to 350.  And because the repair techs always made sure to shut the oven door completely, it always worked perfectly for them.  Kerlan ordered new door hinges, but in the meantime, I'm just mindful of the oven door and make sure it's completely closed.  Problem solved, case closed.