Banana Sweet: Dancing in the Kitchen 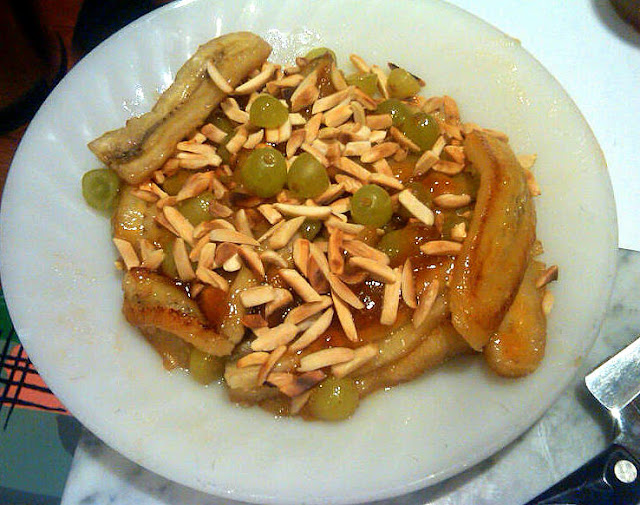 Last night, my house was the venue for the first in a series of dinners cooked from 1966 The Ballet Cook Book by Tanaquil  Le Clercq.  The four course meal -- all based on recipes contributed to the book by the legendary George Balanchine -- ended on a high note with a surprisingly wonderful dessert called Banana Sweet.  (More on that later.) 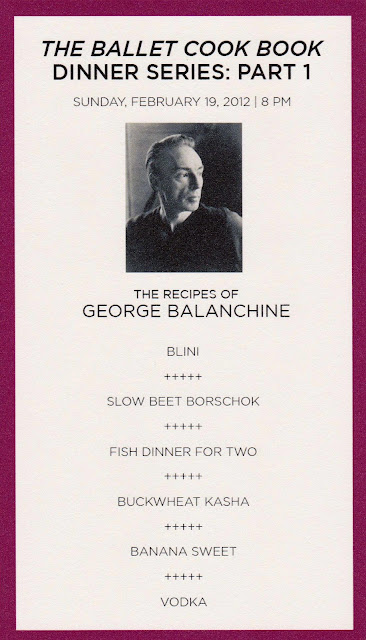 Ryan Wenzel, dance critic of The Brooklyn Rail, author of the blog Bodies Never Lie and, by day, online communications manager of Henry Street Settlement (he is busy!), scored a copy of the rare volume on eBay and conceived the idea of the dinner series.  I signed on immediately.  He enlisted the uber charming Antonio Carmena, soloist for the New York City Ballet and graduate of the French Culinary Institute (my alma mater) to chef this dinner (and hopefully all the others -- he is an amazing cook!)

Because Antonio had to perform in a matinee of Romeo and Juliet that afternoon, Ryan and his ever-helpful friend Jeff Gageby arrived early to help prep the menu (and to sample the evening's alcoholic beverages, which always makes kitchen work more pleasant), especially the tedious task of peeling potatoes, as Jeff (below) quickly discovered.  I doubt his stint in the kitchen will dissuade him from his chosen diet of take-out meals. 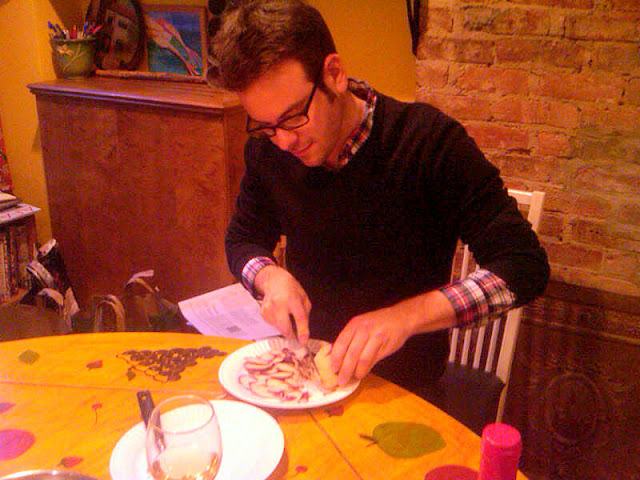 Prep we did, and then -- near disaster!  Upon careful reading of the blini recipe, we discovered the instruction: Let dough rise for five hours!  just an hour or so before we were set to serve. (This is why I always advise people to read a recipe through before starting, advice I obviously don't follow.)  Having little choice (and a lot of caviar for the blini on hand), we forged ahead.  And I'm happy to say the blini were, if not perfect, quite delicious and everyone's favorite.  Sadly, I neglected to photograph these beauties (let's just say we were all starving at that point and had eating, not photos, on our mind) but you can see some guests enjoying them, below. 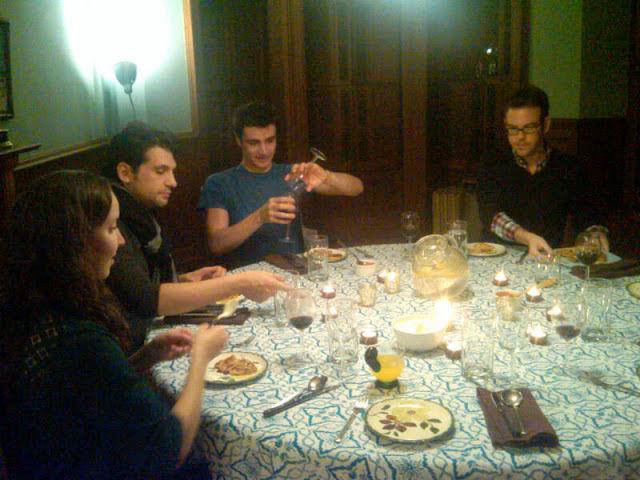 I do have a picture of Antonio (who electrified the stage when I saw him perform on Wednesday night in Russian Seasons) preparing them. 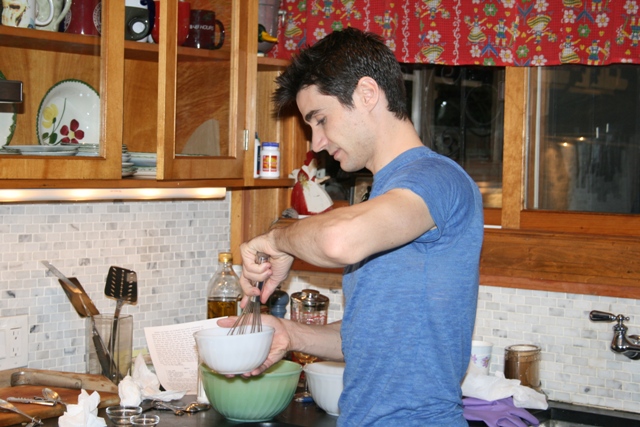 And, below is a shot of Antonio and Ryan with the entree. 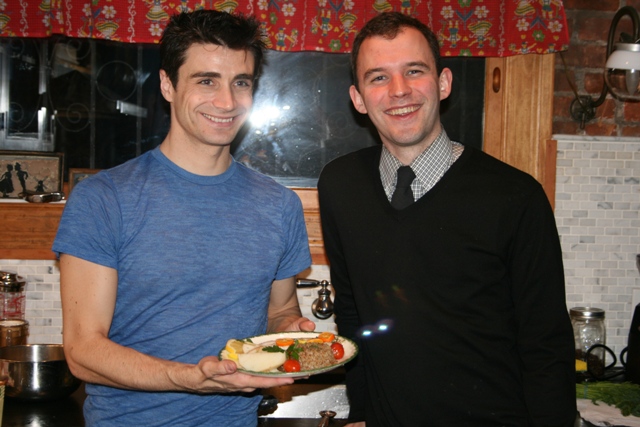 And a close up. Notice how Antonio sprinkled herbs, used citrus garnish and molded the kasha for an especially elegant presentation of this essentially "white plate" meal.  Antonio's partner, the very talented performer Michael Pereira, said the food was reminiscent of the boiled cuisine of northern Portugal, on which he was raised. But, being true to Balanchine, we followed the Russian-inspired recipe exactly.  (Blandness can transcend borders, I guess.) 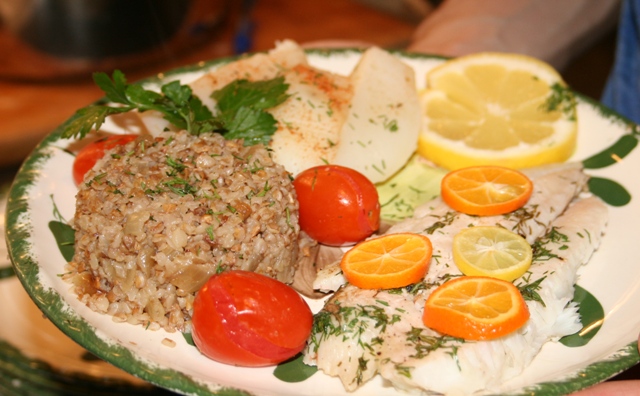 And one more photo, and then -- dessert!
Pictured, left to right, are attendees of the first ever Ballet Cook Book dinner series: Jeff, Antonio, Ryan, Evan Namerow, a non-profit marketeer, a graduate student, former dancer and current author of the wonderful dance blog, DancingPerfectlyFree (she's as busy as Ryan!), me, and Michael, who also filmed part of the event. This was our dress rehearsal -- future dinners will feature a special guest of honor. And then, the pressure will be on! 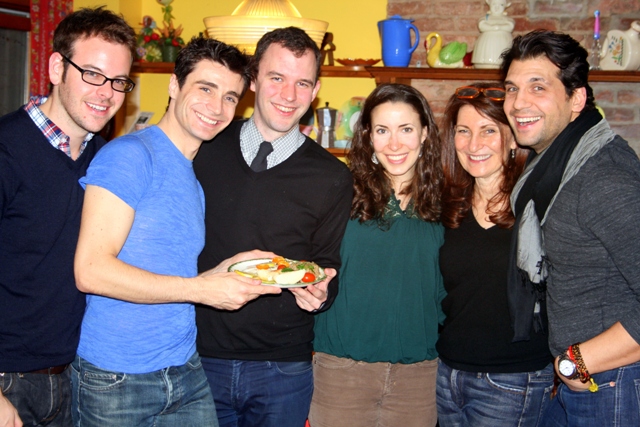 Let's just say that we didn't have high hopes for Banana Sweet.  But it turned out to be the perfect ending to our meal.  It's quite simple to prepare and really delicious.

Peel and slice bananas.  Fry in butter, sprinkle with sugar and lemon juice.  Add grapes and heat through. Transfer to serving dish and spread with apricot jam.  Top with sour cream sprinkled with sugar and almonds.
Note: We roasted the almonds to bring out their flavor and decided to dispense with the sour cream (having had our fill of that ingredient with the blinis.)

Special thanks to the DH.  All the "good" pictures were taken by him, despite his being a bit under the weather.  Thanks, hon!
Posted by Susan at 12:06 PM