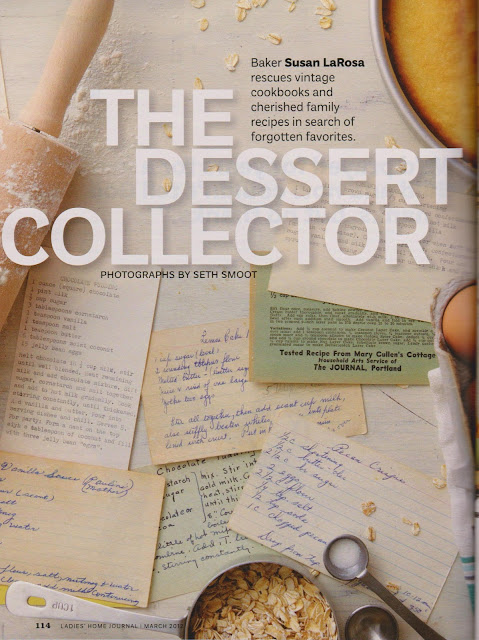 So happy to report that A Cake Bakes In Brooklyn is featured in a six-page article in the March issue of the Ladies' Home Journal.  Here's a link to the online story, but trust me, it is MUCH better in the print version of the magazine (and I'm saying this as as the author of a web log).  The March issue, with Kate Winslet on the cover, is on the newsstand now and is the magazine's debut issue of its new look and focus which has had the magazine world buzzing (and buzzing) for a while now. 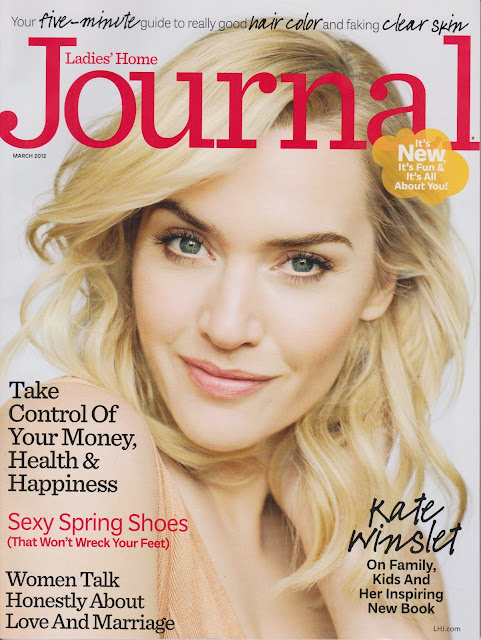 It all began with an email in July from Jessica Brown, features editor of the LHJ.  Would I be interested in having them run an illustrated story about my blog?  Would I!

The photo shoot was scheduled and I was especially excited because they were sending a hair and make-up artist (a groomer as they said, for "light grooming.")  At 8 a.m. that morning, a truck pulled up and the driver unloaded about 20 boxes of props and two big folding tables.  Then, the parade of people began:  The photo director, the photographer and his assistant, the food editor, the food stylist and her assistant, the prop stylist and her assistant. 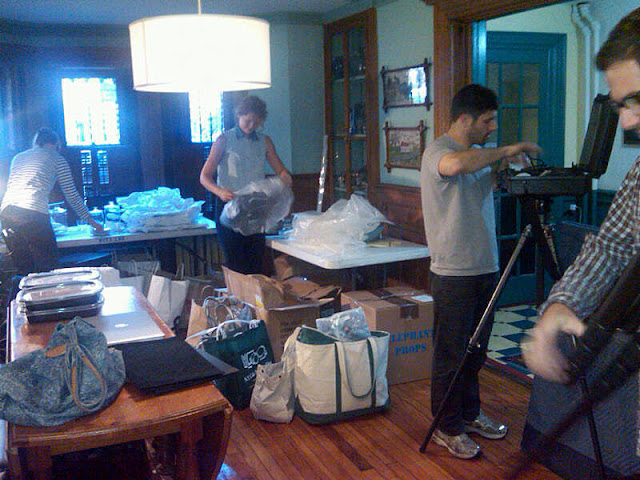 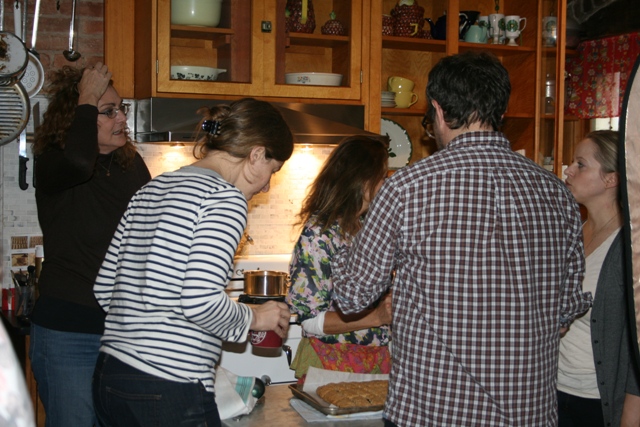 There was a lot of activity in the dining room and kitchen (above), so I went upstairs with the fabulous make-up artist, Marco Testa, where he performed his magic.  Below, is about half of what he brought. This wasn't going to be a "light grooming," which made me very happy! 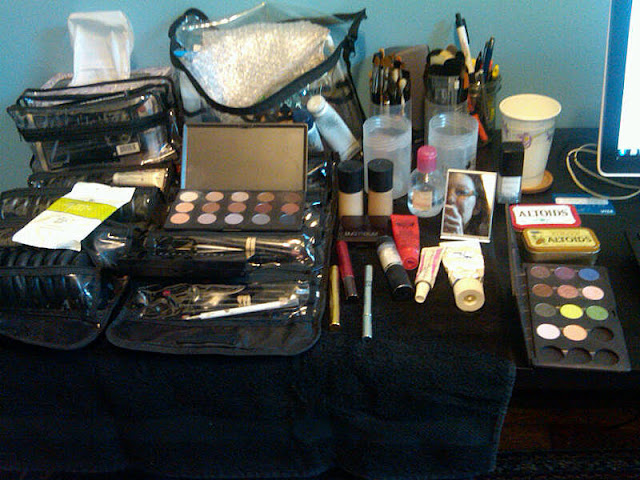 And now the dish and myth-busting:
1) Food used in photo shoots is not real.
Not true, at least not in this case.  No Elmer's Glue standing in for milk or other similar tricks were used.  All the desserts were real (and not sprayed with anything).  After each cake or cookie was shot, we all dug in.  Yum!  LHJ didn't have me do the baking; instead all the desserts for the photo shoot were made by Cyd McDowell.who I liked immediately, even before discovering that she's from northeast Ohio too.

2) Kitchen disasters only happen to amateurs.
While Marco was applying the tenth coat of mascara to my lashes, we heard a crash in the kitchen, and then an apologetic "I'm sorry."  Turns out that the tray of date bars was dropped while being removed from the oven.  But unlike us amateurs who would simply sit down with a glass of scotch and give up, these professionals simply began to prepare another batch.  Cyd explained that they bring lots of extras of everything, just for occasions like this.

3) Recipes aren't tested.
Again, not true.  LHJ tested all of my recipes and made adjustments so that anyone can make them and the results can be repeated (unlike my blog where I make everything just one time).  The ones published in the magazine are perfect.  Also, I was surprised at the level of fact-checking done on the story.  Very impressive, indeed.

By the end of the day (and it was well after 6 p.m.), we were all the best of friends, passing around cups of chocolate pudding, sharing the wealth (and a single spoon!).  I think they appreciated that I didn't care what they did to my house and I appreciated the story (and my glamorous make-over).  When the crew departed, everything was back in place and Cyd left all the "extras" like lemons, pie crusts and enough Crisco to last a lifetime.

I hope you enjoy the magazine.  Jessica Brown did a wonderful interview and article, really capturing the spirit of what I do.  I couldn't be happier.

Below are some pictures DH and I took of that day. 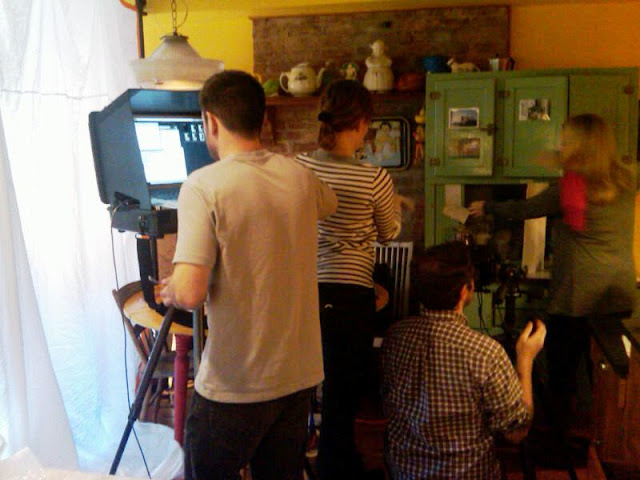 The crew re-arranging my kitchen, above. 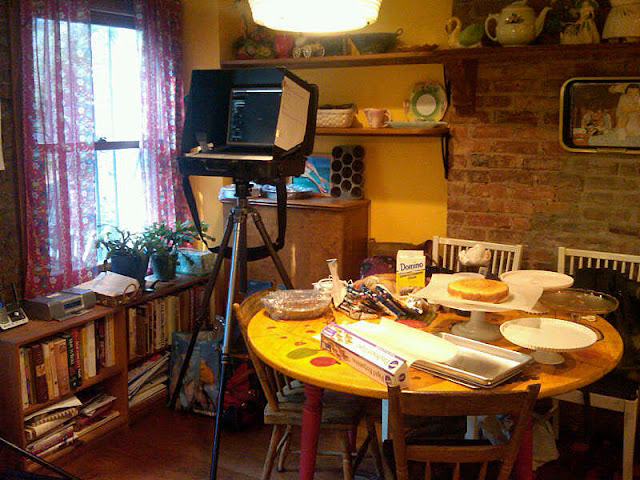 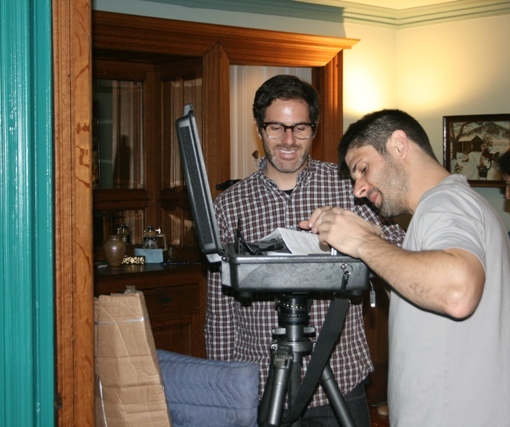 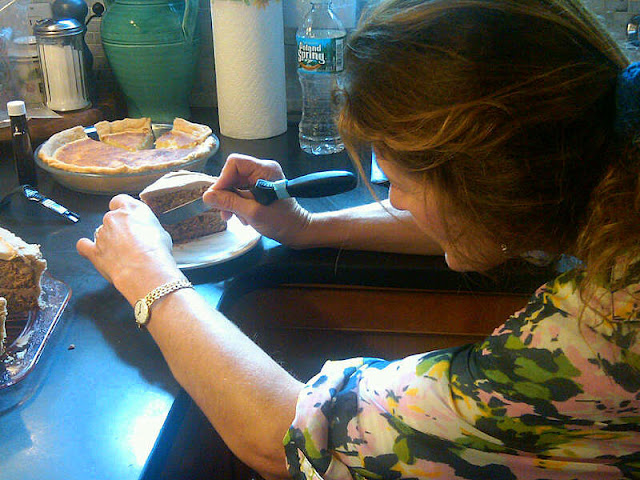 Cyd "styling" a slice of cake.  The photo  director and food editor wanted "a few more crumbs" on the plate. 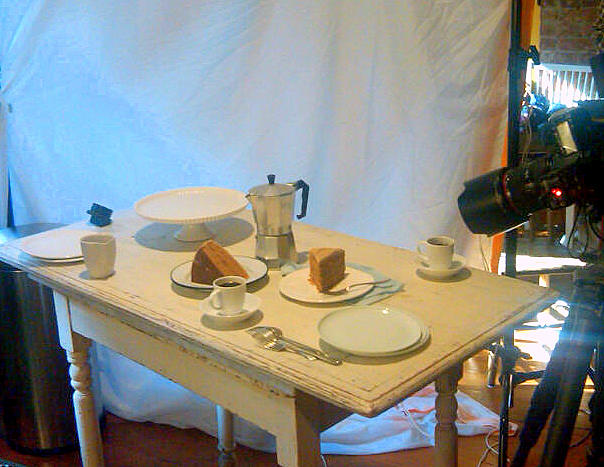 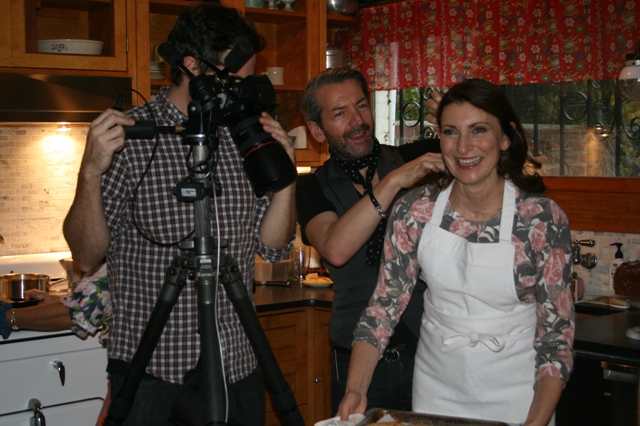 Marco, giving me a little touch-up. 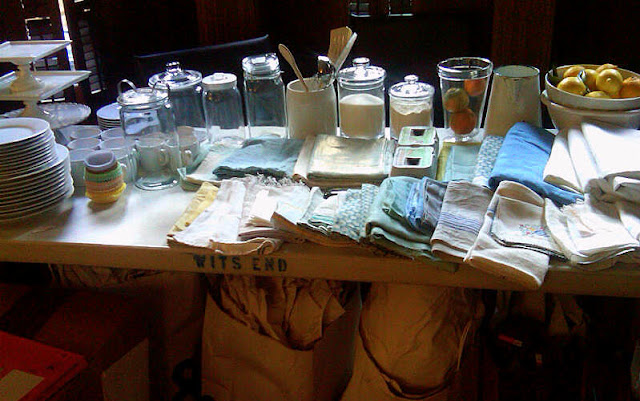 Just one table of props, above.  There were many more items, and some I wished I could keep they were so nice. They also used some of my own kitchen items, including a stovetop espresso maker I got as a wedding gift nearly 30 years ago, an old damaged spatula that I can't bear to throw out because it works so well, and some butter spreaders I got at a stoop sale for 50 cents. 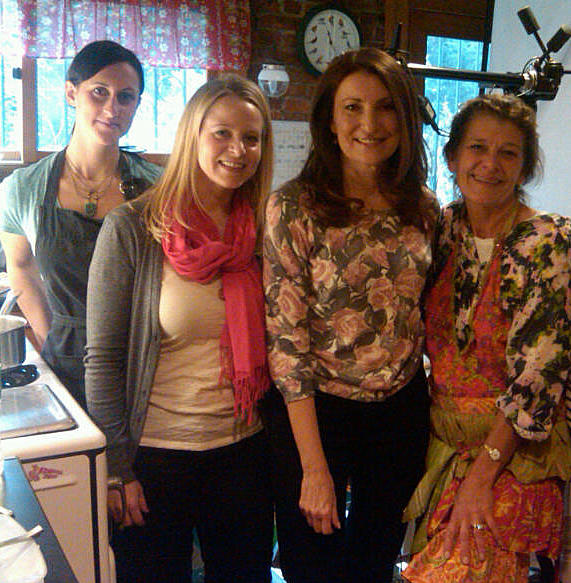 From left, Chelsea Zimmer, Cyd's very talented assistant (and who lives right down the block from me), Tara Bench, LHJ food and entertaining editor extraordinaire, me, and Cyd McDowell, the incredible and fun food stylist.  Check out her outfit! Clare Lissaman, the photo director, was MIA for this picture, but you can see her in the first kitchen shot (fourth photo from the top) at the far left, where it looks like she's pulling out her hair, but I can assure you she was not.  An absolute professional, she directed every shot beautifully.
Posted by Susan at 7:52 AM