Chocolate Eclairs and the Jewish Deli 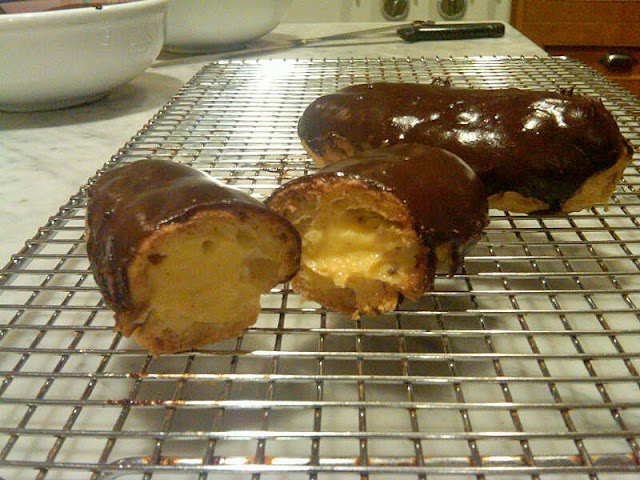 Memory is a tricky thing; a story in today's New York Times says that "Memory is not so much a record of the past as a rough sketch..."  And I was recently quite unnerved when I discovered that my clearest, most vivid childhood memory (of my mother's white blouse catching fire as she leaned against the gas stove) didn't actually happen. Which makes me wonder if we really used to buy chocolate eclairs -- that very French pastry -- from the glass case at the late great Lou & Hy's, Akron's only Jewish deli.

In any event, I've loved chocolate eclairs from the time I was a child. (If I'm remembering correctly.)  They are not easy to recreate at home, as there are three separate components -- the pastry, the custard filling and the chocolate ganache.

But I decided to tackle the dessert, for the light, almost hollow pastry is prepared quite differently from all other pastries. Called pate a choux, the butter and flour mixture is cooked first on the stove top.  Eggs are added and only then it is baked in the oven.   I can't imagine who invented this unusual this pastry but it was popular among home cooks in the early 20th century -- there are many recipes in my collection, most of them labeled "puffs" or "cream puffs."

There's not a chocolate eclair among the cards, though.  Instead, the cream puffs were dropped in heaps on the baking sheet, baked and then sliced open before filling with cream (or whatever). 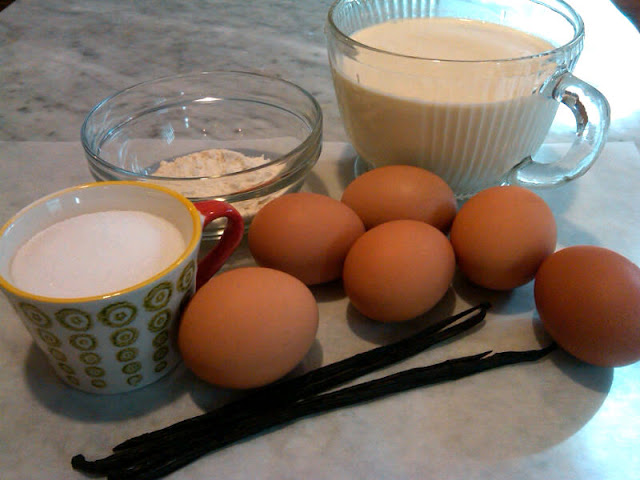 The first step is to make the filling -- I chose a modern recipe, in part because I have a lot of vanilla beans, and vintage recipes don't use them.  I doubled Francois Payard's vanilla pastry cream published by Martha Stewart.  The mise en place for this delicious concoction is above. 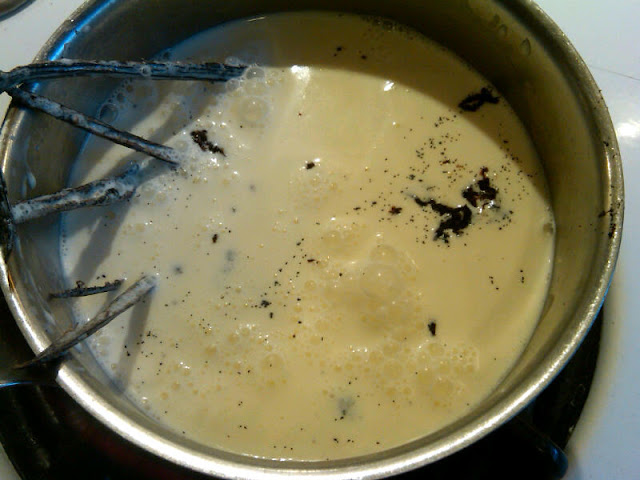 While this is cooling in the refrigerator, make the pastry, below, by cooking butter, water and flour on the stove top until it pulls away from the sides of the pan. 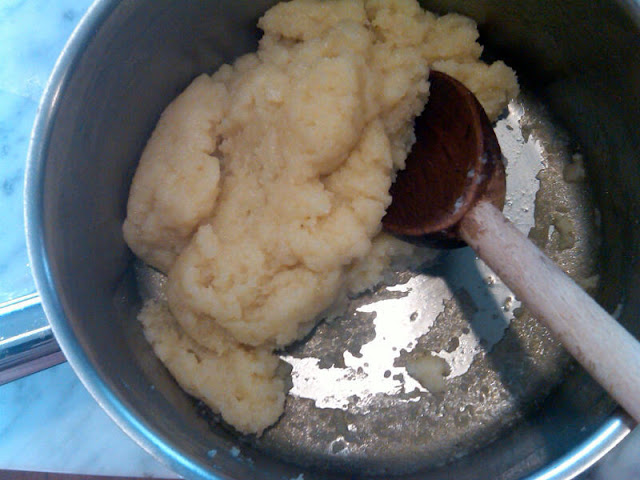 Remove from the heat and add eggs, one at a time, mixing well after each. 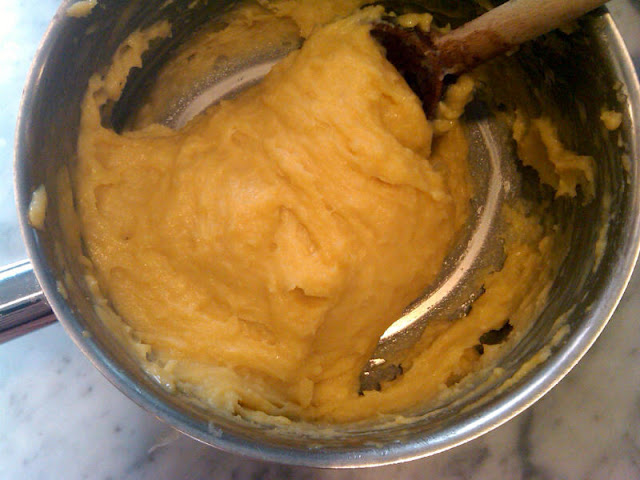 Fill a pastry bag and, using a plain round tip, pipe the dough into one-inch by four-inch mounds. 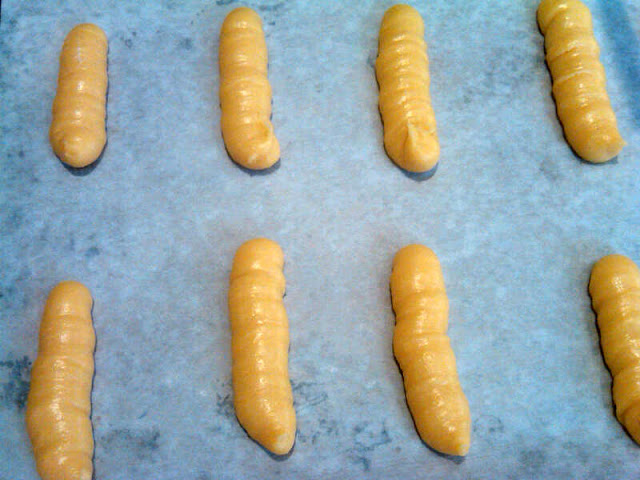 When they emerge from the oven, stick a wooden skewer in each end to create a bit of space for the filling. 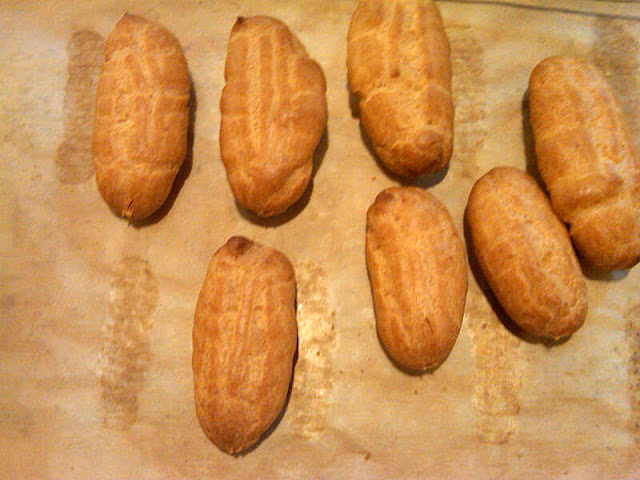 Then, fill your pastry bag with the cooled pastry cream and squeeze it into the pastry. 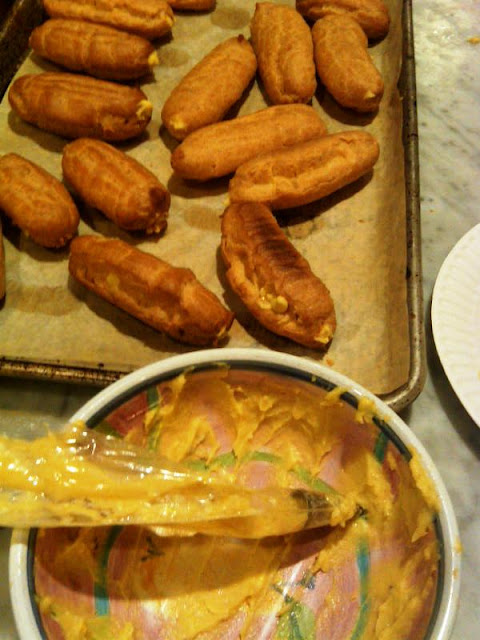 When this is complete, make the chocolate ganache and dip each eclair into the chocolate, letting the excess drip back into the bowl.
And then enjoy, for you've earned it!
Posted by Susan at 9:49 AM