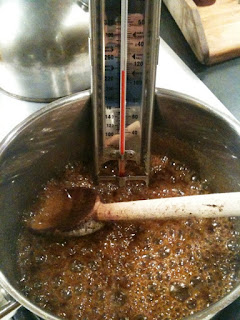 I made this to frost the Spice Cake (good one) on Sunday. I found it in the same box of type-written recipe cards and, though there was no frosting suggested for that cake, I thought this would be a good match. It was delicious, but took a bit of tinkering with the recipe. The boiling to the softball stage was fine (thank God for candy thermometers), but when I beat the sugar syrup with the rest of the ingredients, something *happened.* Perhaps I beat it too long, perhaps the recipe was written for a hand-held or beater less powerful than my standing Kitchen Aide. Whatever, the frosting had a weird consistency; it was almost the equivelant of chocolate seizing (though this was caramel). I instinctively added a small amount of boiling water, rebeat the mixture, and voila -- a lovely creamy caramel icing, just as the recipe card promised. But be warned, this is VERY SWEET. Not a problem for most of us, but dear husband found it a tad too sweet. However, he still enjoyed the cake AND frosting.
Posted by Susan at 9:00 PM