The Charm of the Unfamiliar 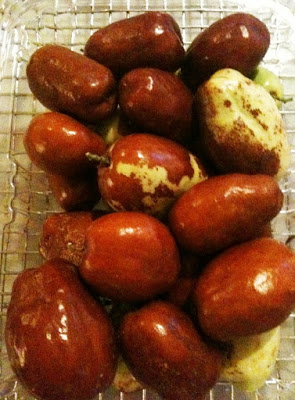 I almost always buy  food at farmer's markets, and usually eat what's in season and grown within driving distance of New York City.
But sometimes, the exotic has an allure that's hard to resist.
Imagine the thrill of going to your local green grocer and discovering (among the pears and apples) a fruit that you've never seen before, one you had no idea existed until that moment.  And that fruit and brand new taste could be yours for just $2.57.
That's what happened to me a few days ago when I encountered something labeled "Jujube, Korean Date." They look a bit like fresh (not dried) dates and taste a a little like them too, but aren't as sweet and the texture is a much firmer, and almost crispy.
I learned (thanks, Google) that they are Asian imports, are often used medicinally and the dried ones can be substituted for dates in baking recipes.  I found one recipe for the fresh fruit --- jujube butter (think apple butter) -- but I"m probably just going to keep it simple and eat them raw.
Posted by Susan at 7:47 AM