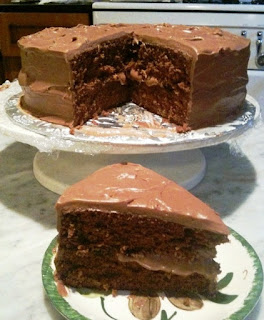 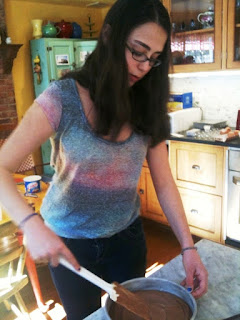 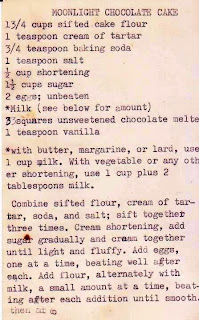 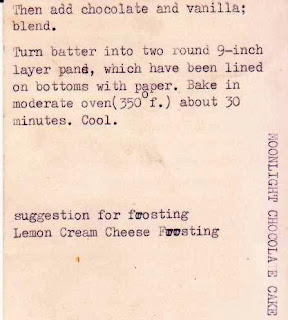 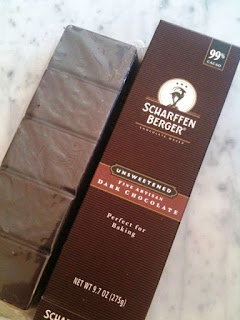 To celebrate President's Day (and the holiday from school and work), the beautiful, talented and smart Allie, 14, (the daughter of my beautiful, talented and smart friend Lisa), stopped by to bake with me.  Together Allie and I poured over my collection of vintage recipe cards. And when she chose the "Moonlight Chocolate Cake" card, I was thrilled -- that's exactly the cake I wanted to try.  Something about the name "moonlight" was so intriguing -- was the recipe that special? Or was it the cook trying to distinguish her chocolate cake from her neighbor's? Or was she a creative sort trying to layer her world with a name that conjured up images of romance and mystery? (Or, as DH suggests, perhaps it was named after Moonlight Graham, a baseball player immortalized in Field of Dreams.)

The cake was fairly easy to put together, especially with Allie -- a young woman who truly knows her way around a kitchen -- helping out.  We quickly got it in the oven and started on the frosting. The recipe's author had recommended a lemon cream cheese frosting with this cake, but Allie (not a lemon lover) wasn't having any part of that.

She selected a chocolate Seven Minute Frosting, a true classic from Good Housekeeping's 1958 Cake Book "With decorating ideas for many occasions."  This old-fashioned frosting is basically egg whites and sugar beaten with a hand-mixer in a bowl atop a pot of boiling water until firm peaks form.  It's tedious work; the seven minutes is simply an "ideal" and the actual beating usually lasts longer. 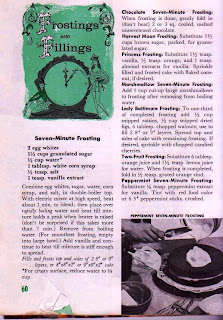 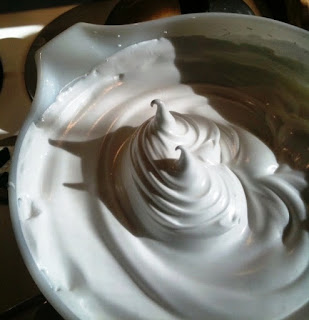 Things were going well: the peaks formed and  the frosting was fluffy and very marshallow-y.  Not a bad thing at all.  But then I misread the recipe and added the melted chocolate (instead of taking it off the fire and beating it further -- and then adding the chocolate).  Immediately, the frosting lost its volume and became almost like chocolate pudding.  I couldn't decide whether to toss it and start anew or risk throwing good ingredients after bad to try to save it.  The latter option won out.  First one stick of butter went in the mixture, then some confectioners sugar, then another stick of butter -- the basis of modern-day buttercream.  The frosting got a bit thicker, and the butter and sugar certainly didn't detract from the flavor.

"It tastes like chocolate mouse," declared Allie, who having recently returned from a Paris vacation, was quite the authority on these things.  She promptly named our new creation "Seven Minute Buttercream."

After a bit of refrigeration (a longer time would have been better), we frosted the cake. It needed to set up in the refrigerator before it could be moved to Allie's house around the corner, where it was enjoyed by her family.

This is another example of a cake that tastes better the second day.   The actual cake is very soft with a subtle flavor.  The Seven Minute Buttercream -- my most delicious disaster to date -- is spectacular anytime!
Posted by Susan at 10:05 PM