"Better Than Sex Cake"? Not this one! 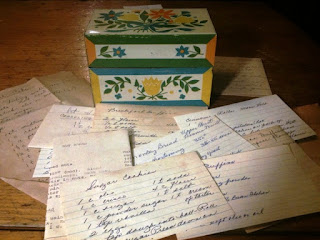 Faithful readers:  I did something I said I wouldn't.  I bought a recipe box on eBay, instead of discovering it serendipitiously at an estate sale or flea market.

I justified the purchase because it was the recipe collection of a southern home cook, one that I would be unlikely to encounter in my usual midwest or northeast haunts.

The box contains a lot of interesting (and very southern -- cornbread, hush puppies,sweet tea, etc.) recipes, some handwritten on yellowed slips of paper, including one I made today, Pineapple Sheath Cake (and which I'll write about soon).

But the recipe card that caught my immediate attention was entitled "Better Than Sex Cake." Now I will concede that maybe, possibly, perhaps a very, very special cake might in someone's world view be better than sex, but certainly not this cake! Its first ingredient is Duncan Hines Butter Cake mix, followed by two other offenders: instant vanilla pudding and Cool Whip!  Of course it was meant tongue in cheek and was maybe a tiny bit risque at the time, among the Texas housewives who swapped this recipe.  And I'm certainly the last person to discourage anyone from having fun with food (or the naming of same).

This recipe is outside of "my" era of baking, as the inclusion of convenience ingredients suggests.  Most of the cards in the box are older than that, with recipes calling for real foods, like butter, flour, sugar and eggs.  But it's interesting to see the progression (if that is considered "progress") of time in one homemaker's recipe box -- from cinnamon rolls made with yeast and mashed potatoes (very popular in the 1930s) to that Better Than Sex Cake that I truly hope isn't better than sex for anyone! 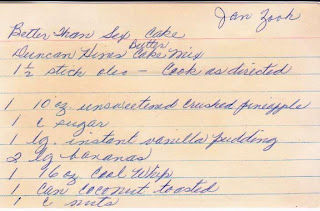 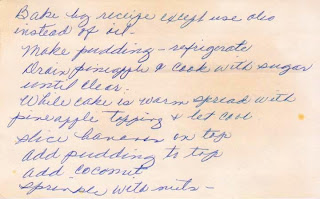