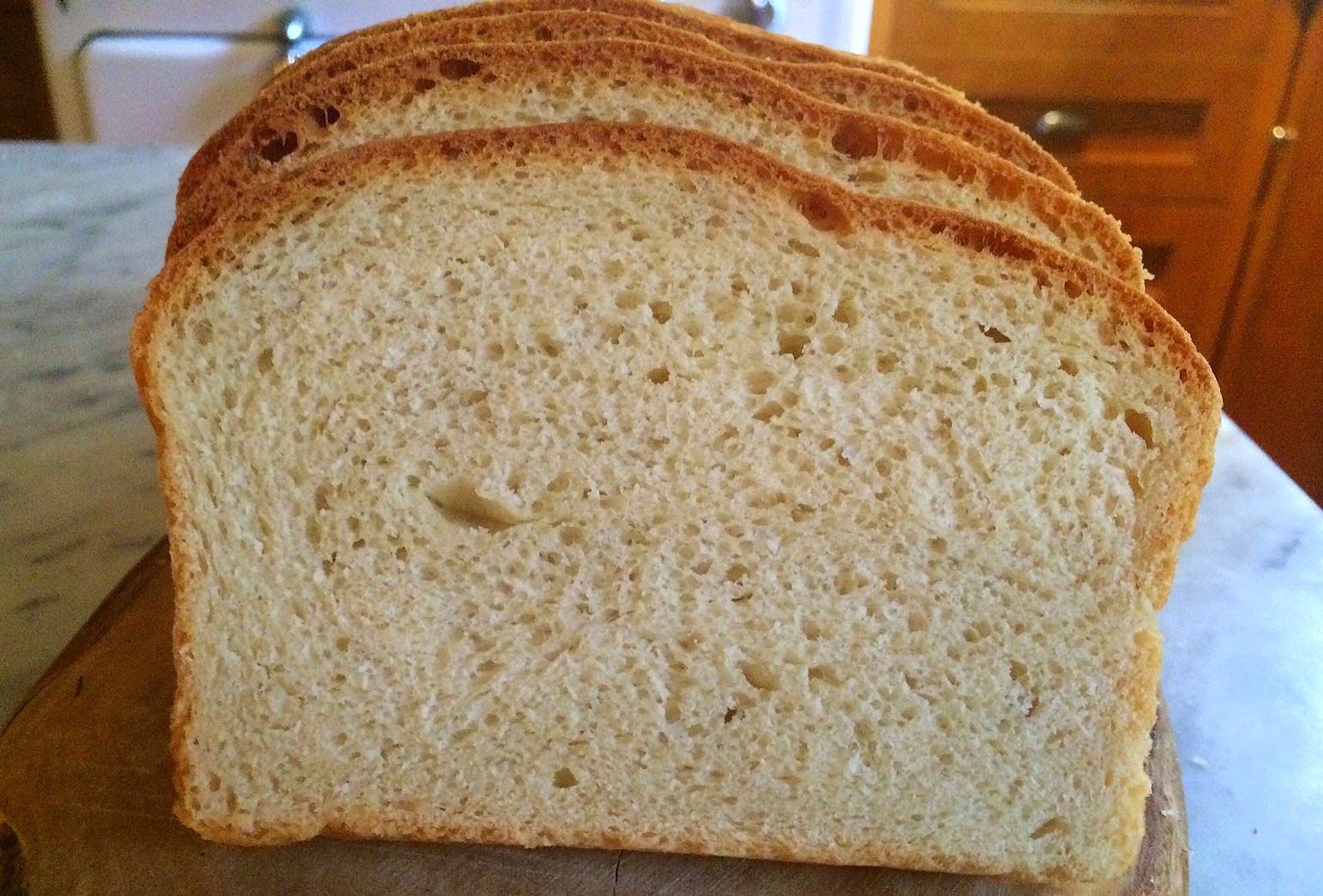 Instead of complaining about the relentless rainy downpour in New York yesterday, I decided to use the weather to my advantage and bake bread. For while humidity will torpedo many a kitchen endeavor (meringues, most candy and nearly anything involving egg whites), low pressure days are perfect to use yeast, the theory being that it works better (i.e., rises more easily) without the competition of high pressure air pushing it down.

Bread baking is easy, requires time (but not much of the cook's time), fills the house with a marvelous aroma -- and then allows you and your guests to enjoy the freshest bread imaginable.

The vintage recipe I chose called for heating milk, sugar, salt and butter in a saucepan and letting it cool to lukewarm. Meantime, pour one cup of warm water in a bowl and sprinkle the yeast over it. Stir to blend. (The water should be between 105 and 110 F.  If the water is too cold, the yeast won't bloom; if it's too hot, the yeast may die.) You can use a candy thermometer or just sprinkle some drops on your wrist -- it should feel warm, not hot. I also add a tiny bit of sugar to hasten the yeast's bloom. 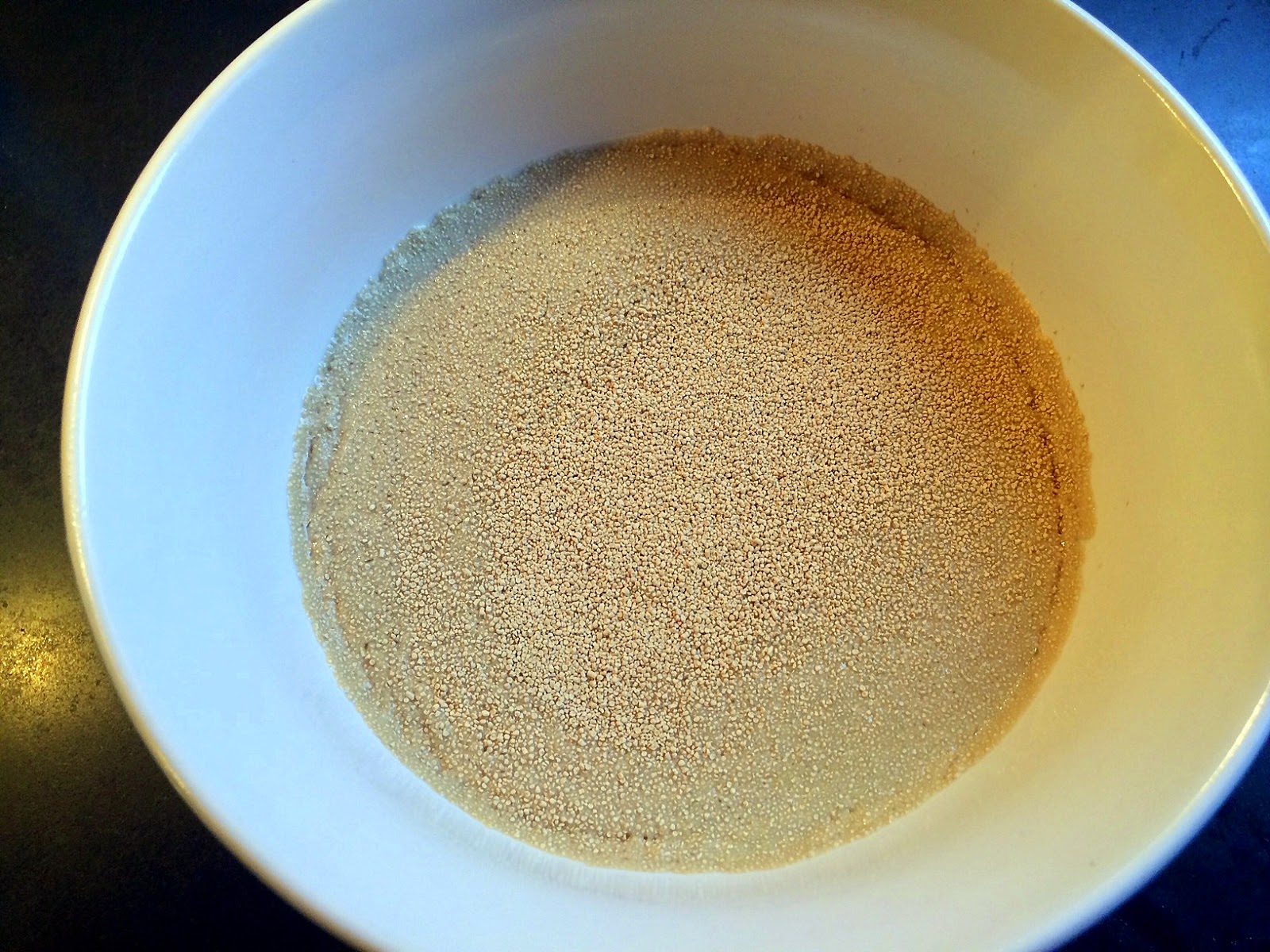 After five or ten minutes, the mixture should look like this and you know the yeast is working. If it doesn't, check the date on your yeast package (might it have expired?) and try again with a fresher yeast, warm water and a bit of sugar. 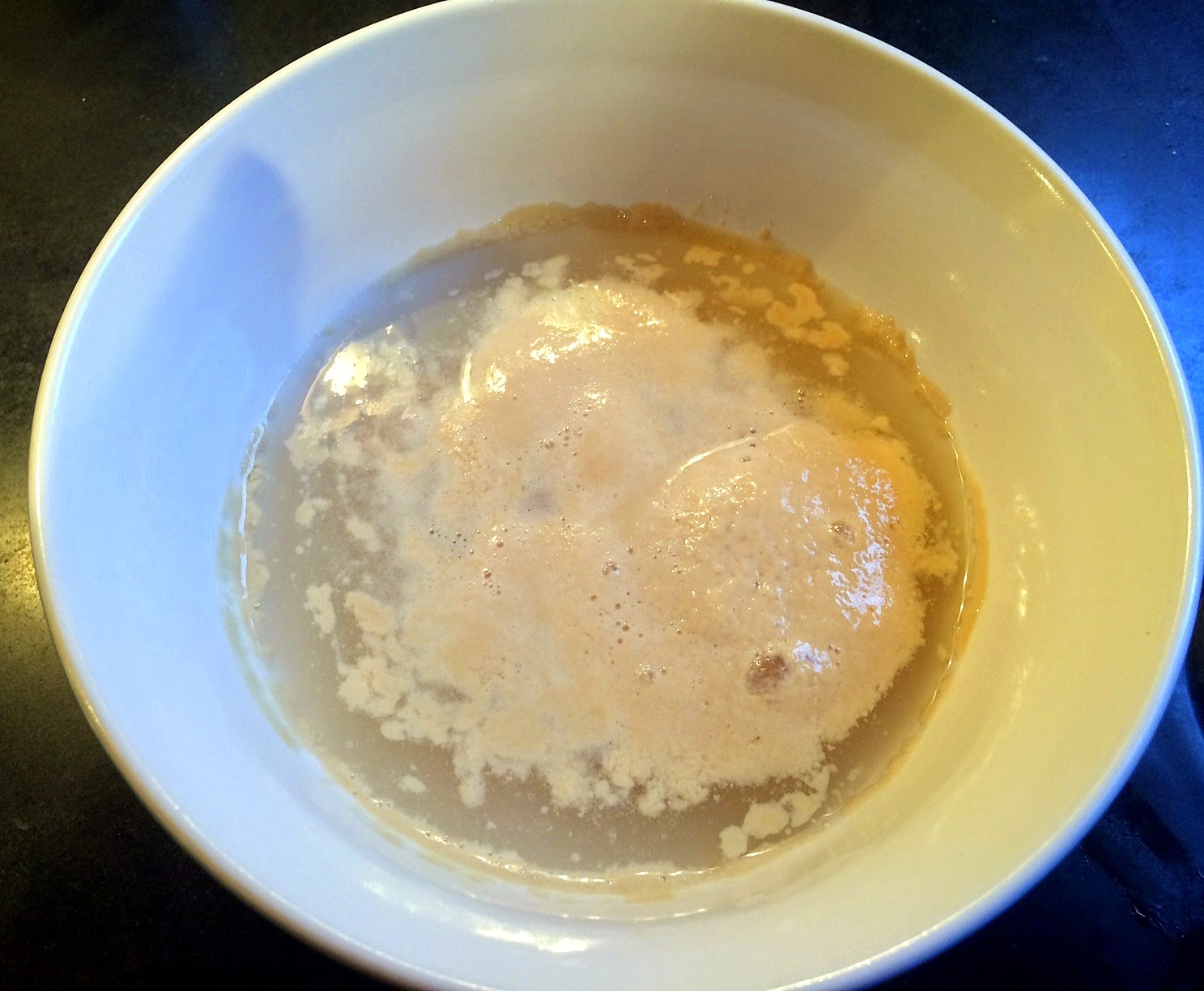 Combine the yeast and the milk mixture in a large bowl. Mix in three cups of flour and stir until nearly smooth. Add in the rest of the flour and combine. Turn the dough out onto a floured work surface and knead until smooth and elastic. Place in a greased bowl, cover with a cloth and let it rise in a warm spot until double, about one hour. 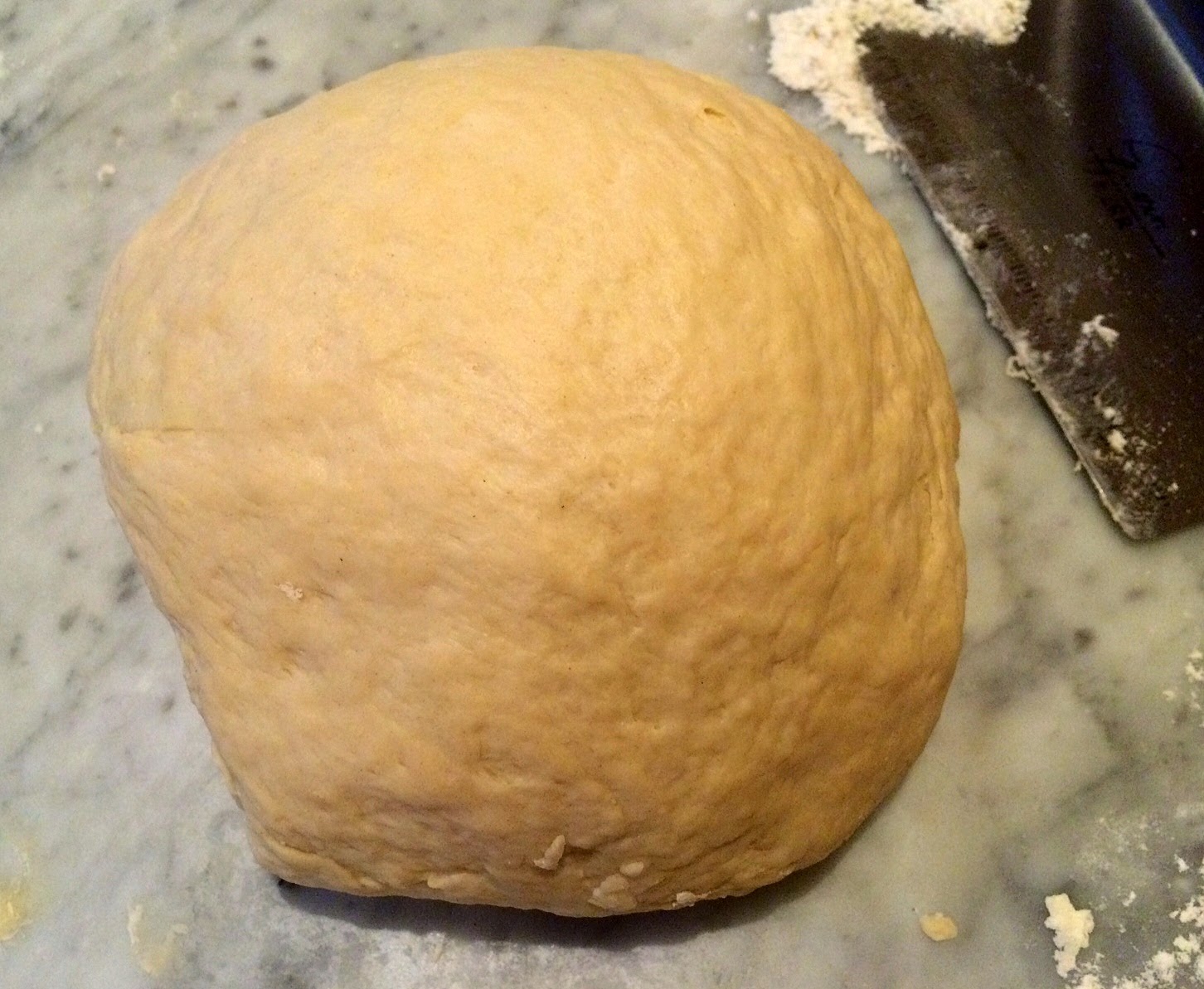 Punch it down (as satisfying as it sounds) form into two loaves and place in greased pans. Cover again and let rise until doubled. 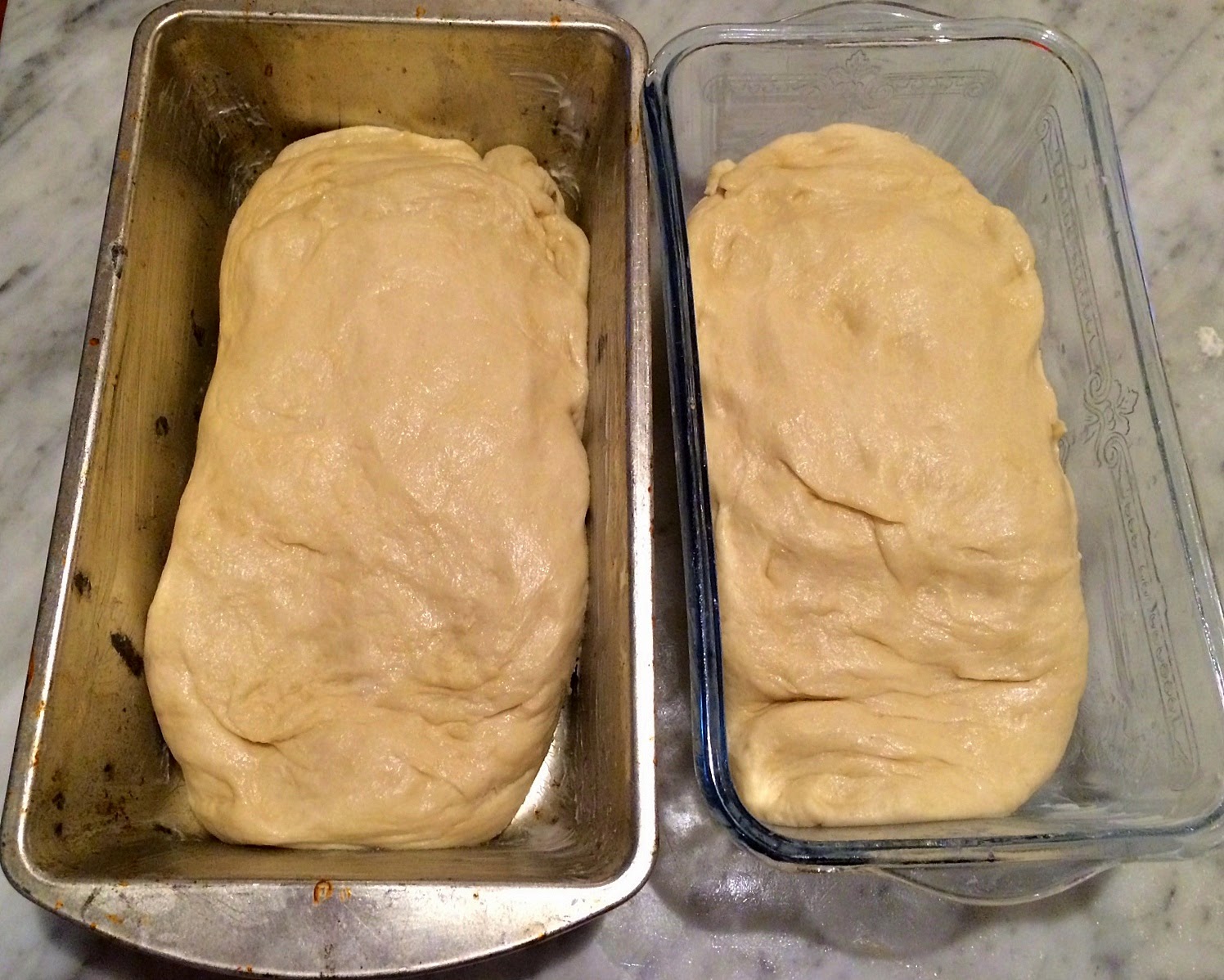 When the loaves look like this, brush the top with butter or shortening and place in a preheated 400 F oven. After ten minutes, reduce the heat to 300F and let bake for another 45 minutes. 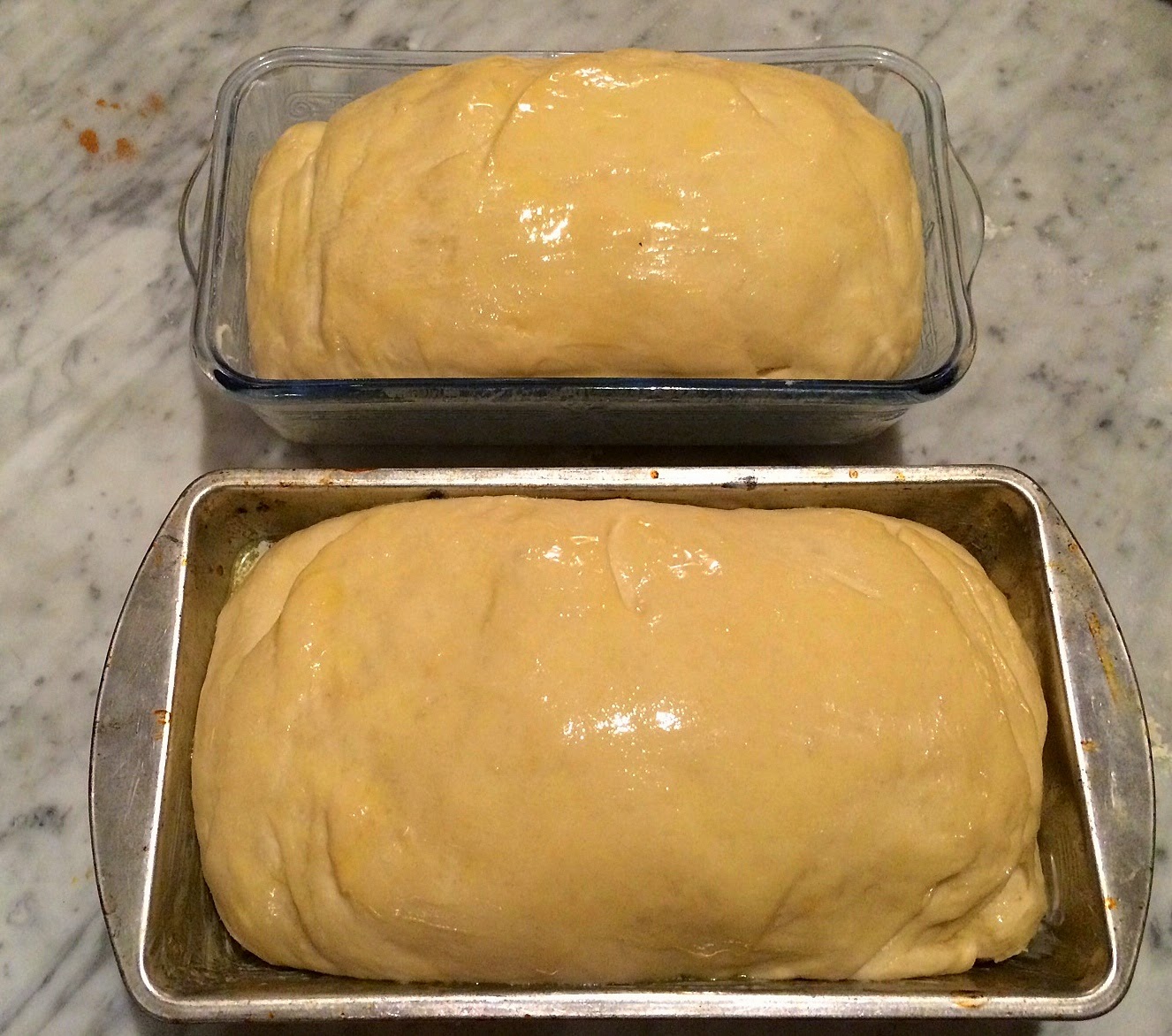 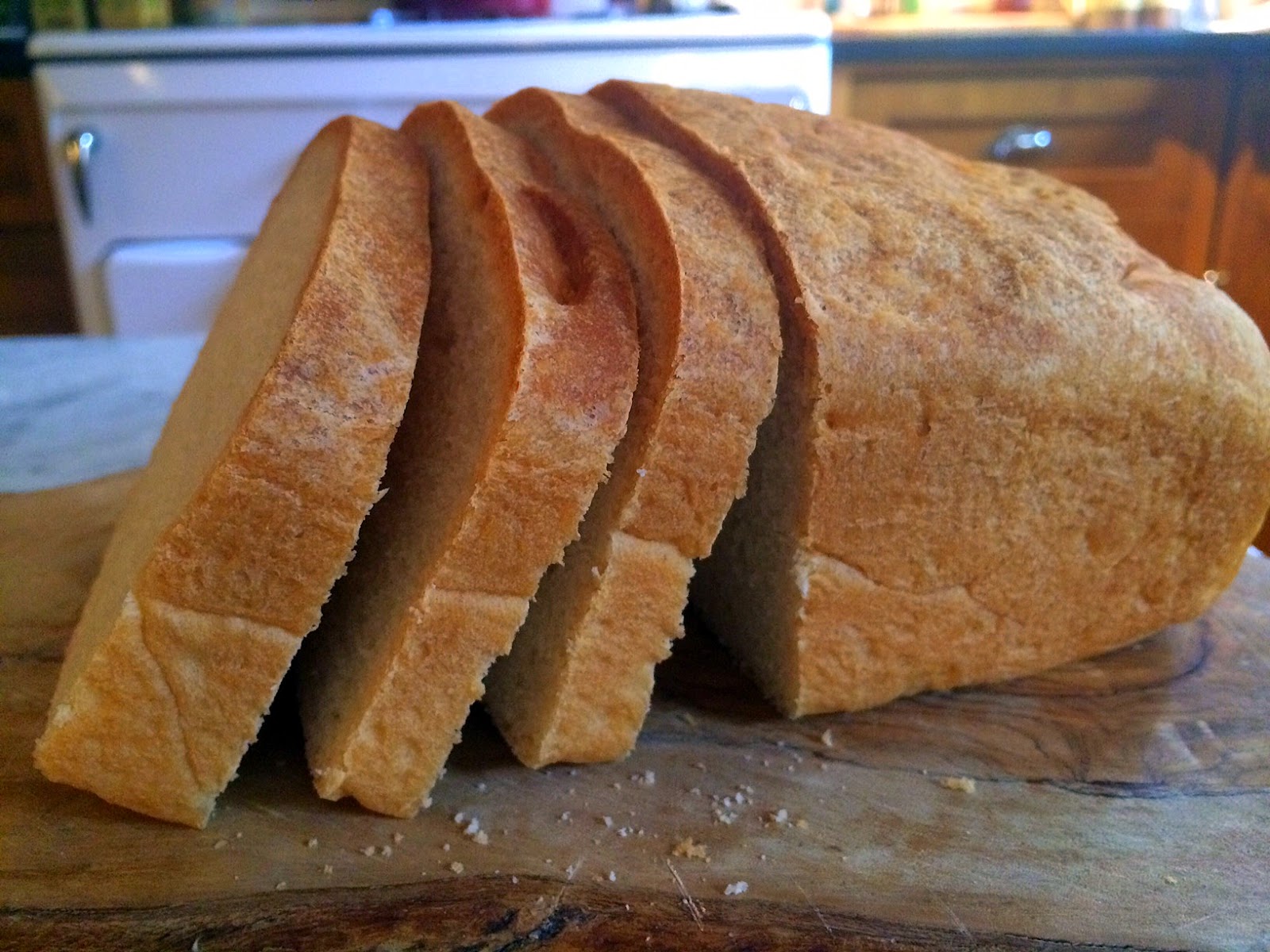 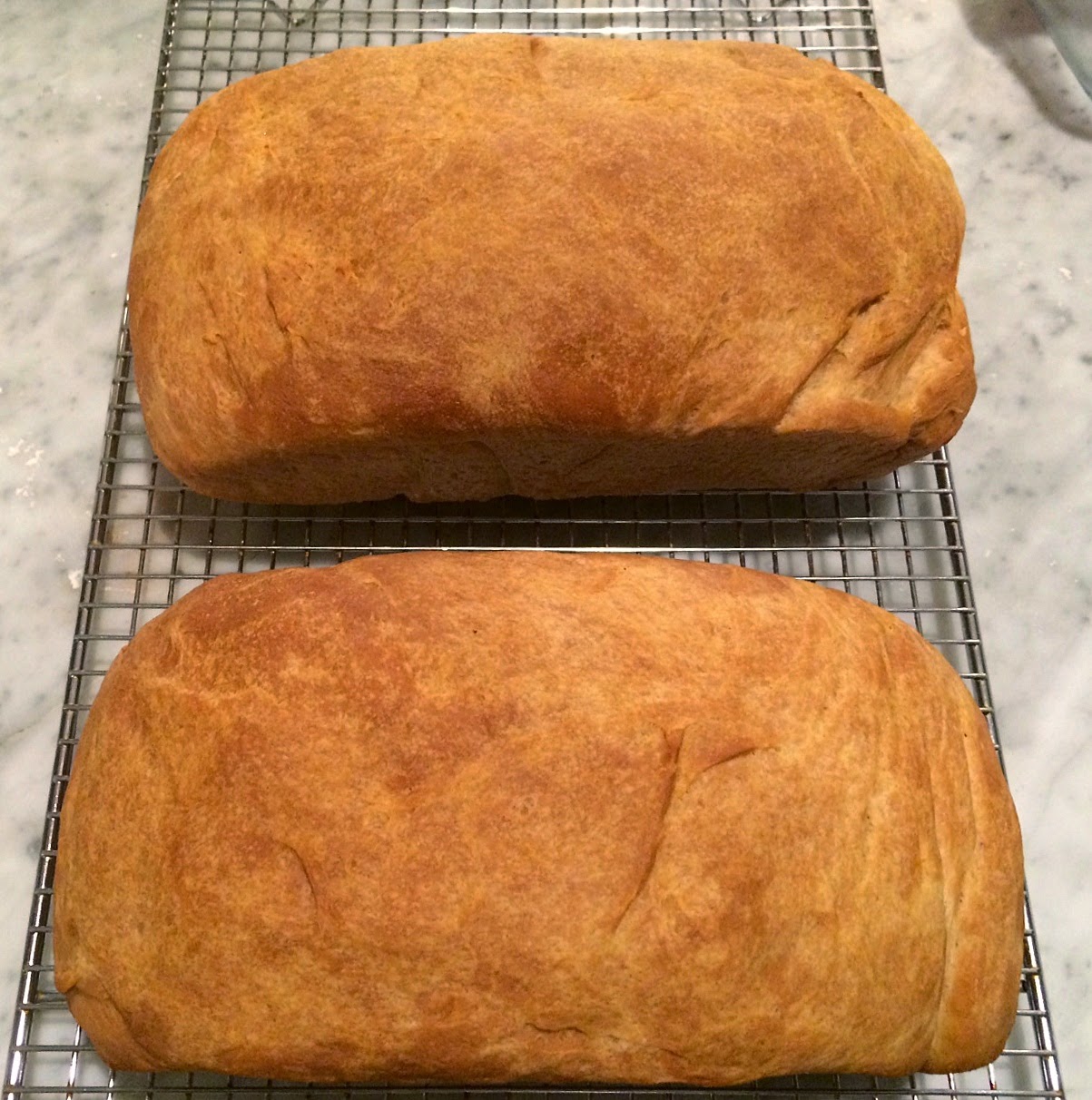 Production notes: I thought I followed this recipe exactly (before I spilled orange extract from another baking project all over the recipe card), but later realized I had used only one package of yeast instead of two -- and it still came out fine, because of the low pressure and/or the power of yeast. The moral here is: You can't screw this up, or even if you do, it still works and is delicious. I also used butter instead of shortening.  Full recipe typed out below. 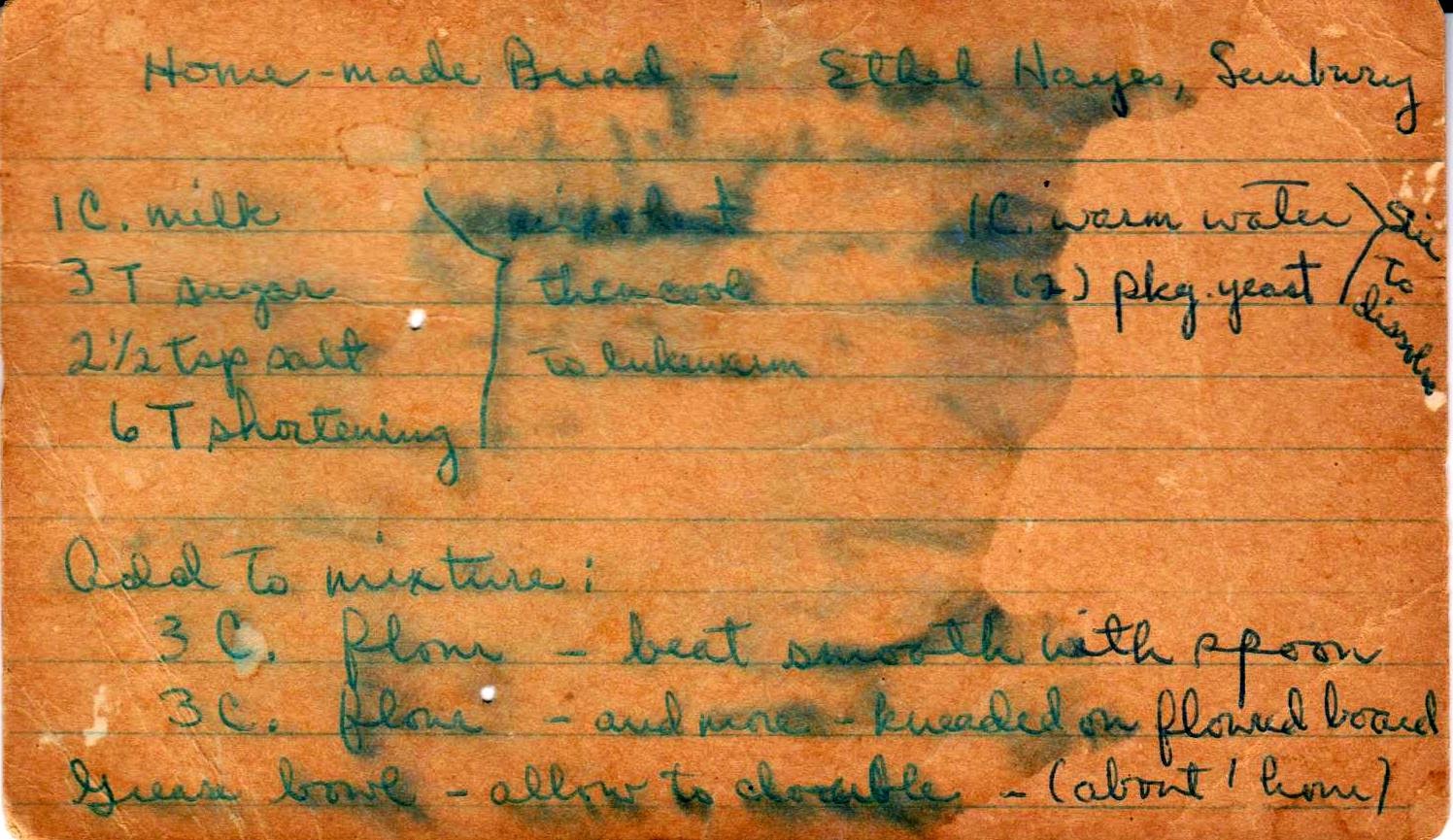 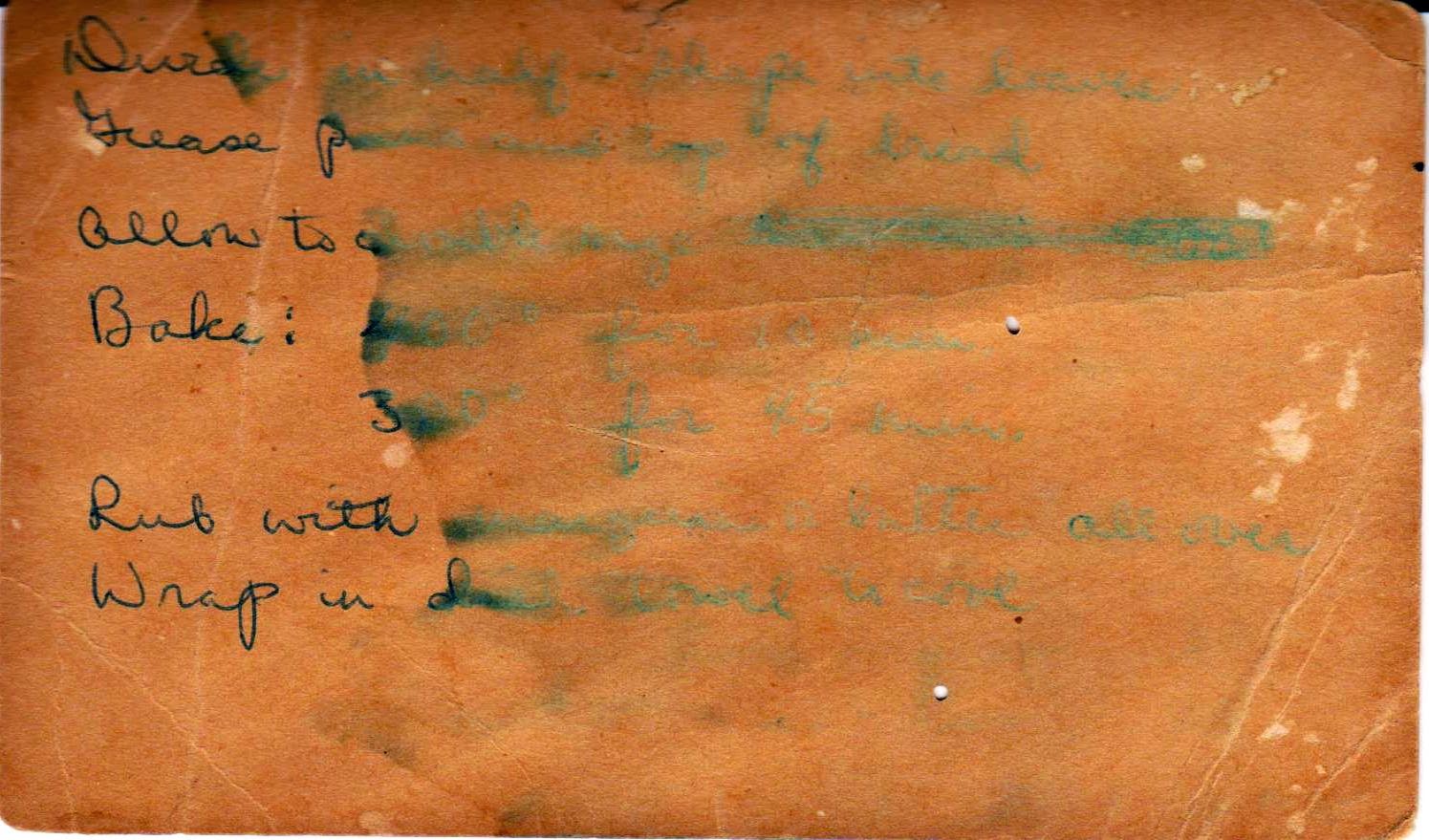 Mix milk, sugar, salt and shortening (butter) in a saucepan and scald. Set aside and cool to lukewarm.

Sprinkle two envelopes of yeast in one cup of warm (100 F) water and set aside.

Place in greased bowl, cover with a cloth and let rise until doubled (approximately one hour).
Divide dough and place in two greased bread pans. Brush top with melted butter or shortening.

Bake for ten minutes in a 400 F oven.
Lower heat to 300 F and bake for 45 minutes.
Remove to rack, cool slightly and turn out bread. Cool completely.