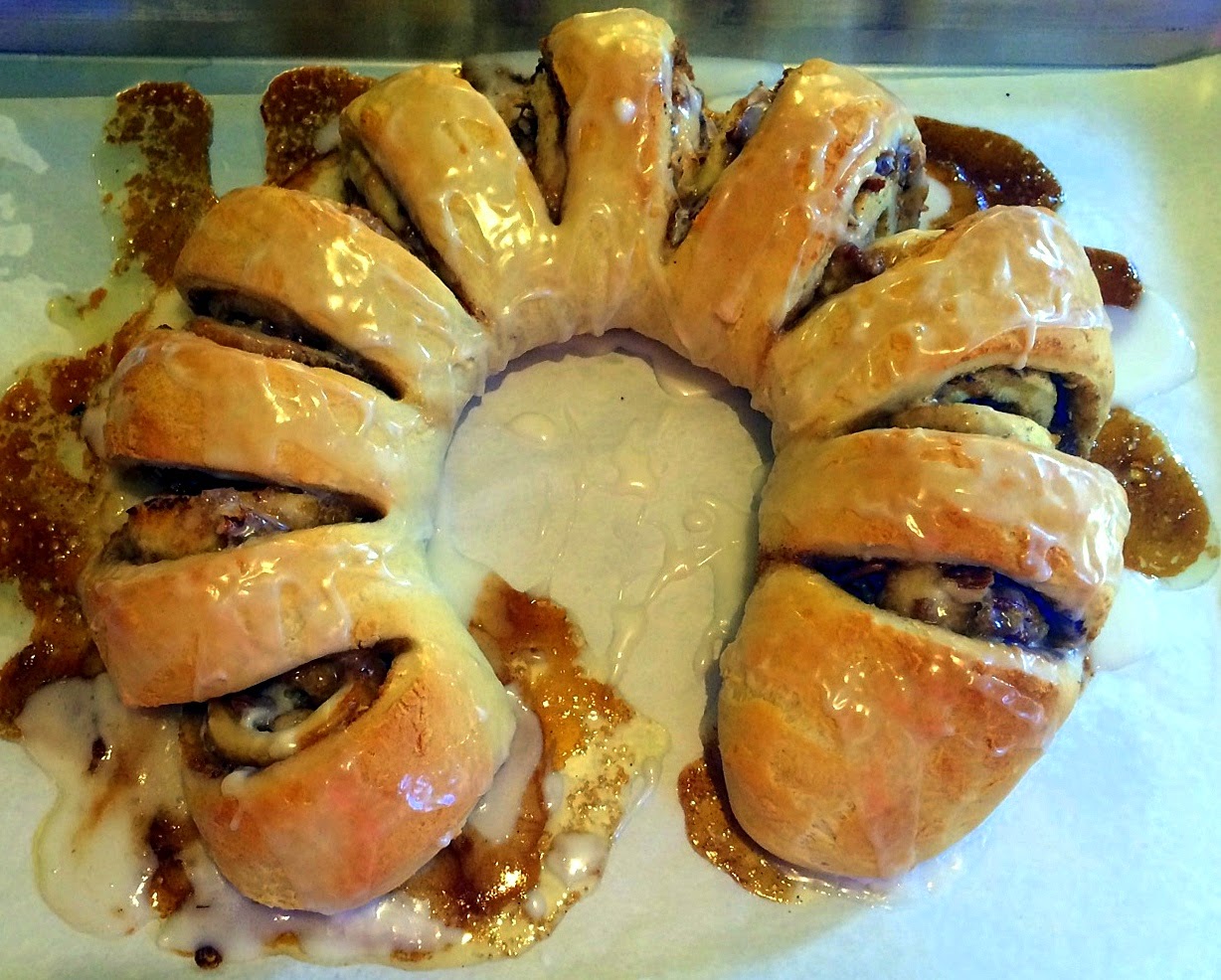 In the days following the Christmas madness, there's nothing more homey than a freshly baked coffee cake. However, at the request of my DS, who wanted cinnamon buns on Christmas morning, that's when I made this. Never mind that I was expecting 16 relatives and friends for dinner that day!

This is a yeast dough, and it has to rise a couple of times, so planning ahead is essential. Because I wanted to bake this Christmas morning, I prepared the dough Christmas Eve, in between our dinner out (main feature: martinis) and the gift-wrapping frenzy that began just as the clock struck midnight.

Although the original request was for cinnamon rolls, I thought this vintage coffee cake recipe would make a nice substitute, for it's really more of cinnamon rolls baked in a  horseshoe shape. To serve, simply slice off a roll (or two). The recipe is part of a collection I bought from a Florida estate. I'd guess it's from the late 1940s. 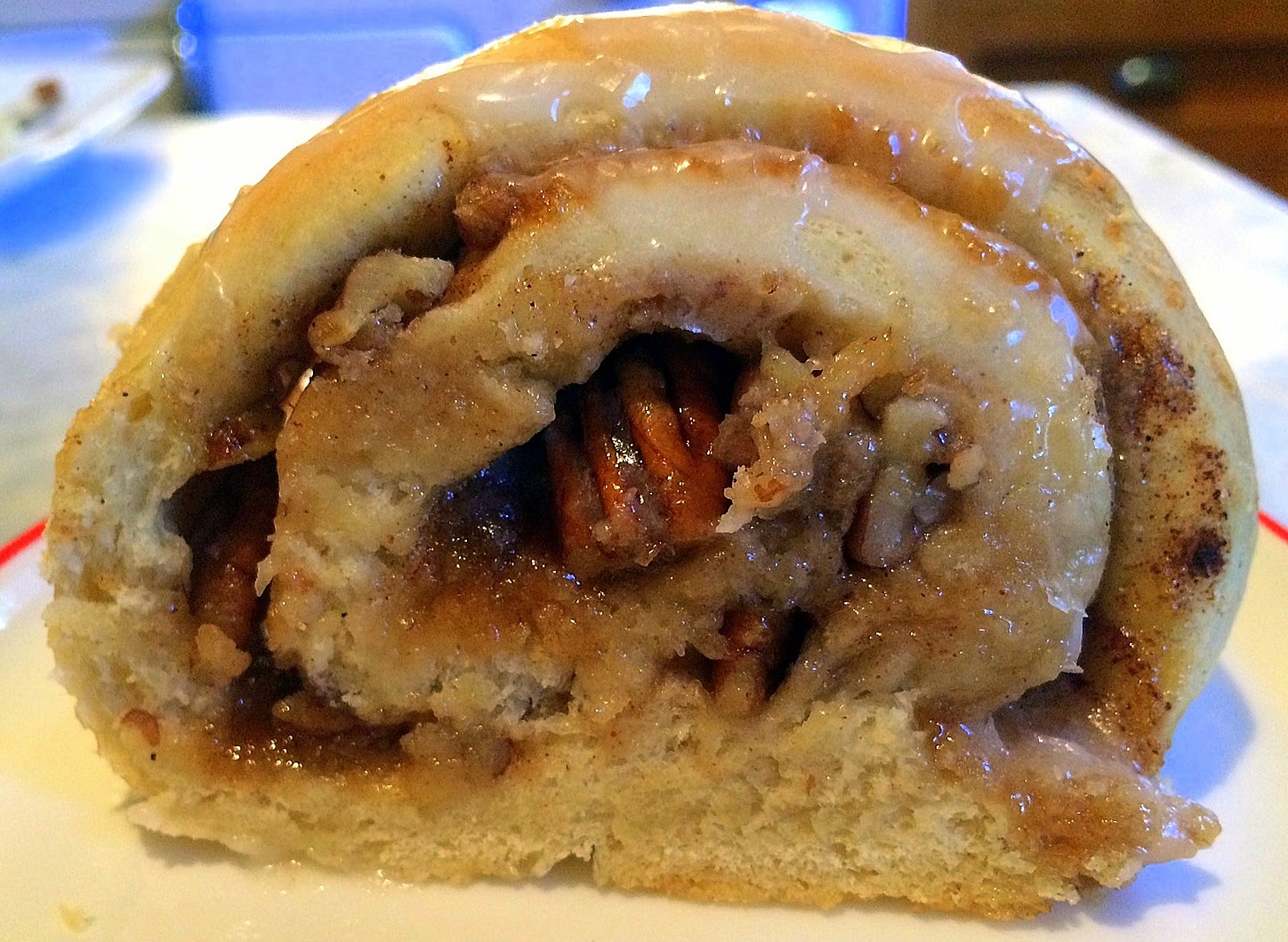 Begin by placing the yeast in warm water. Wait a few minutes until it foams. 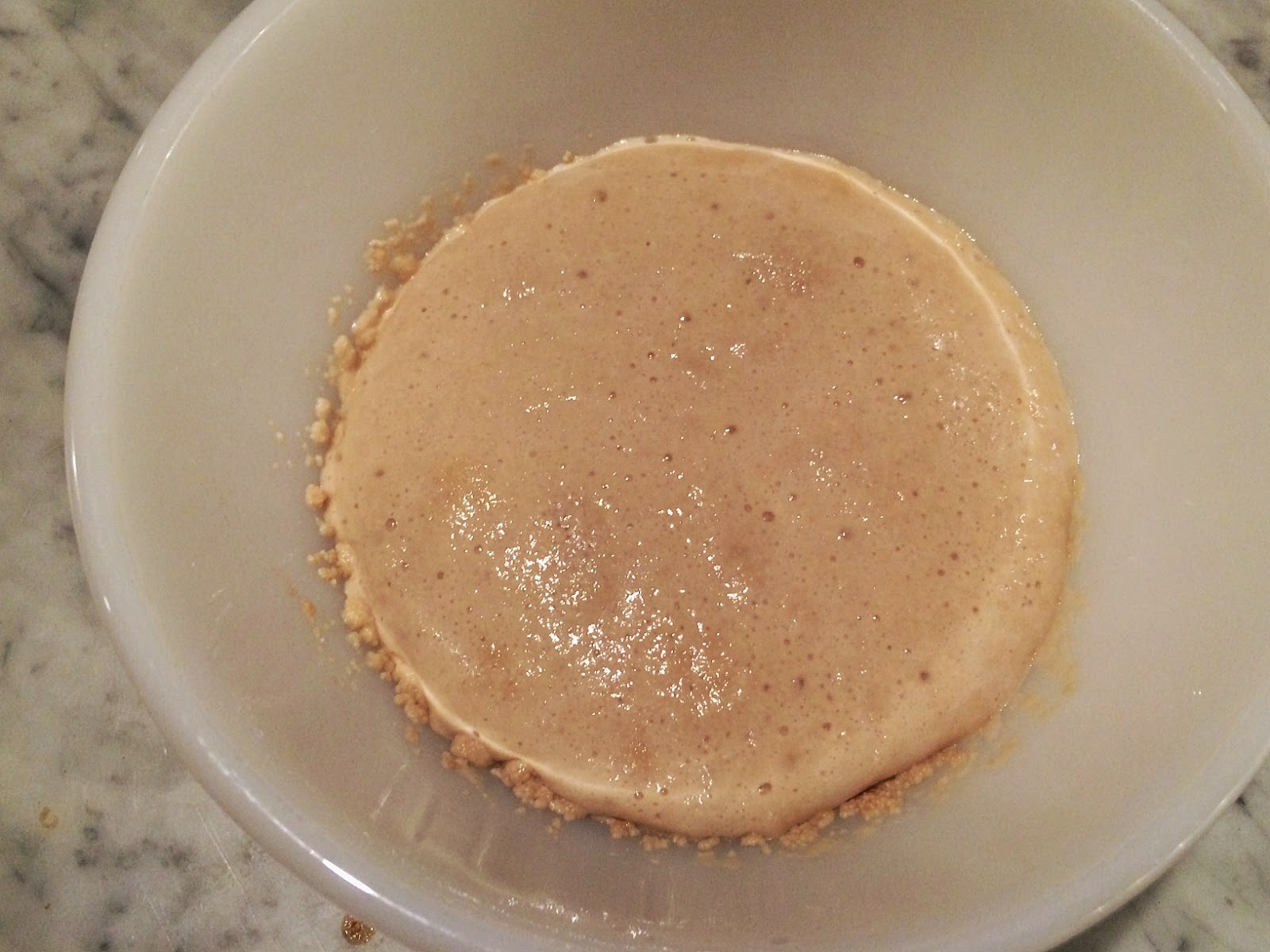 Scald the milk, add the butter, sugar and salt. 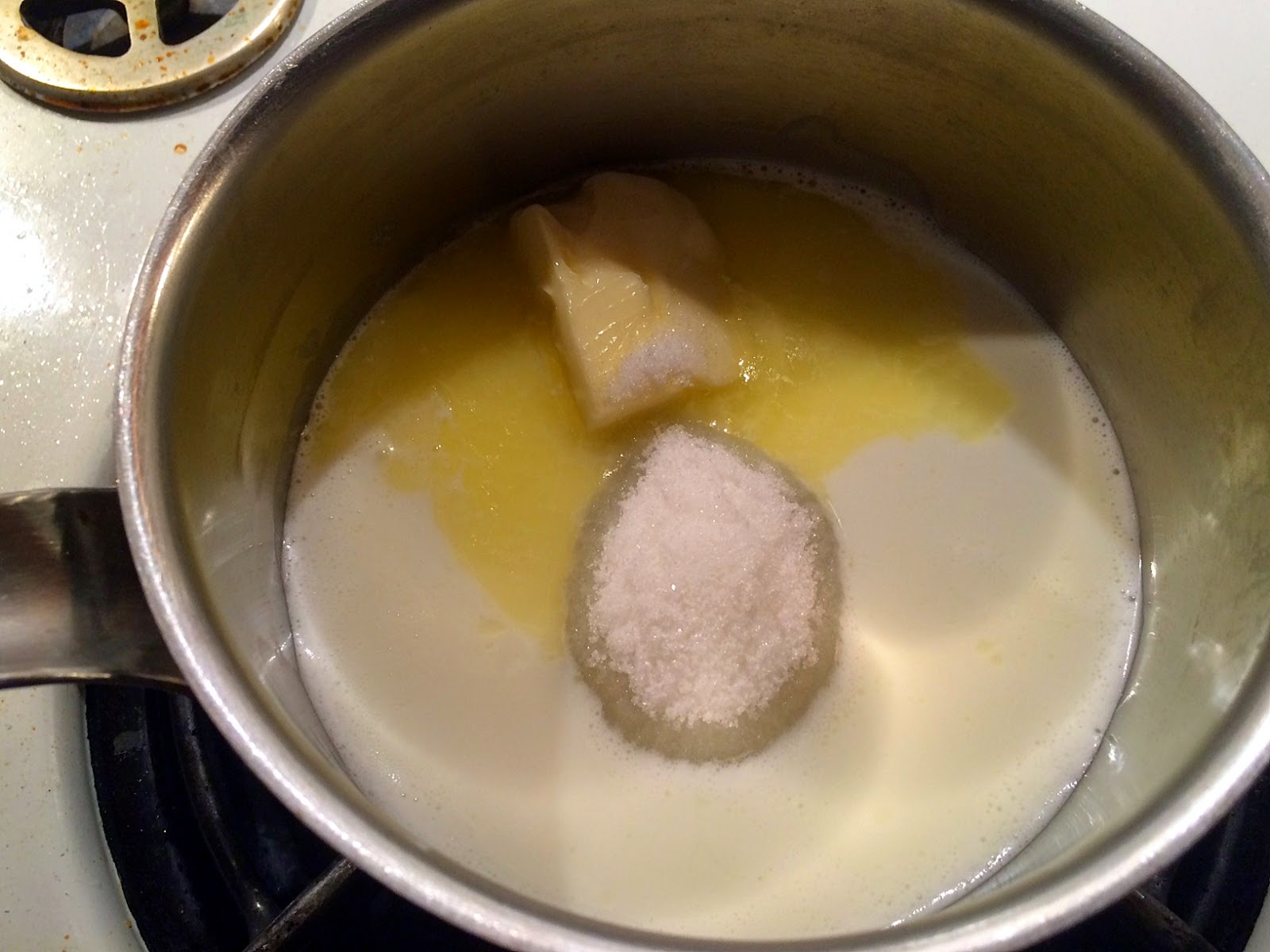 Add two cups of flour and the yeast to the milk mixture and add the eggs. 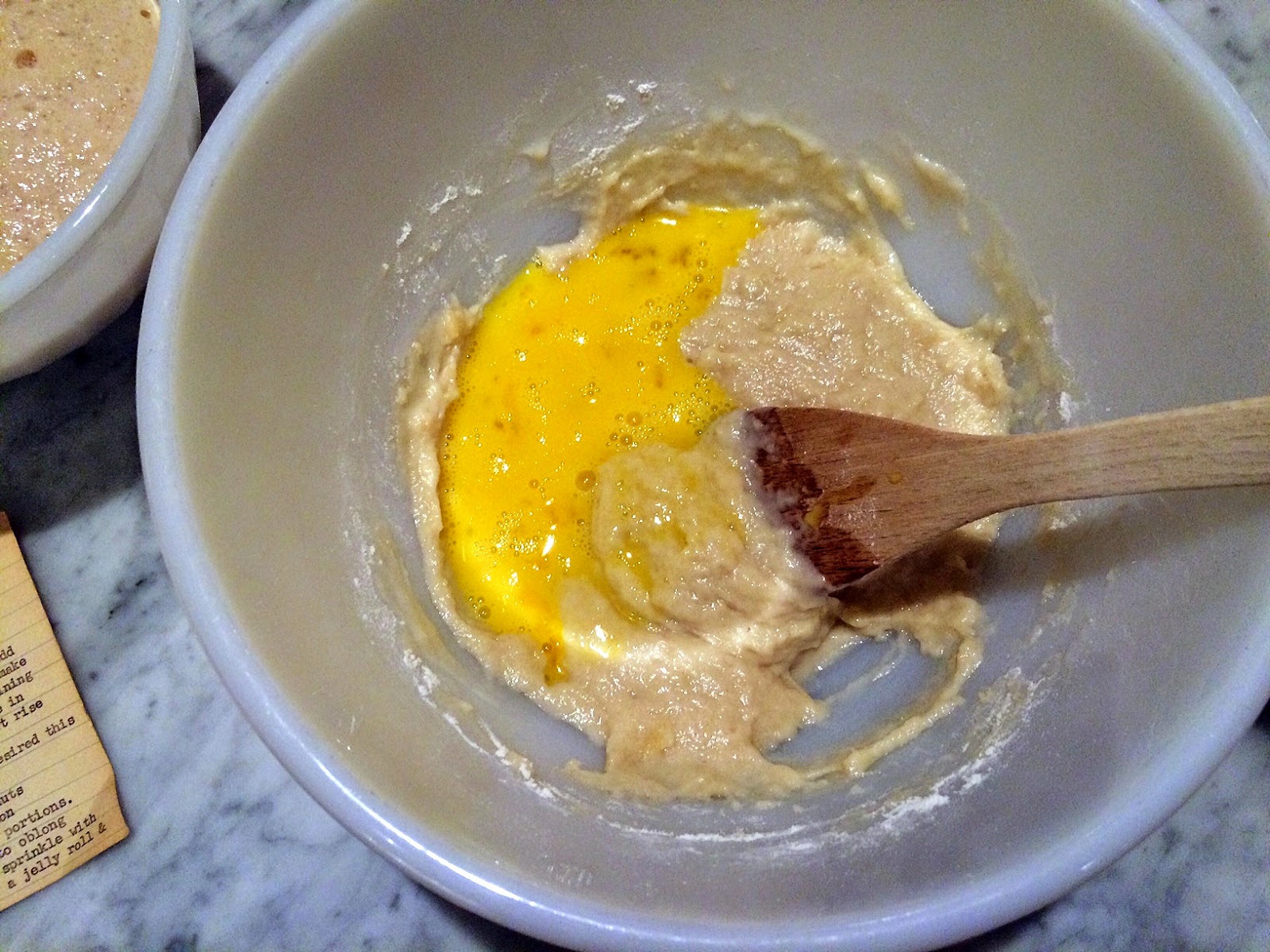 After adding the rest of the flour, I transferred the batter to the electric mixer. When the dough held together, I removed it and kneaded it for a few minutes. Place it a greased bowl, cover with a clean dishcloth and let it rise for an hour or so. (At this point, planning to bake it in the morning, I punched down the dough and stored it in the refrigerator overnight.) 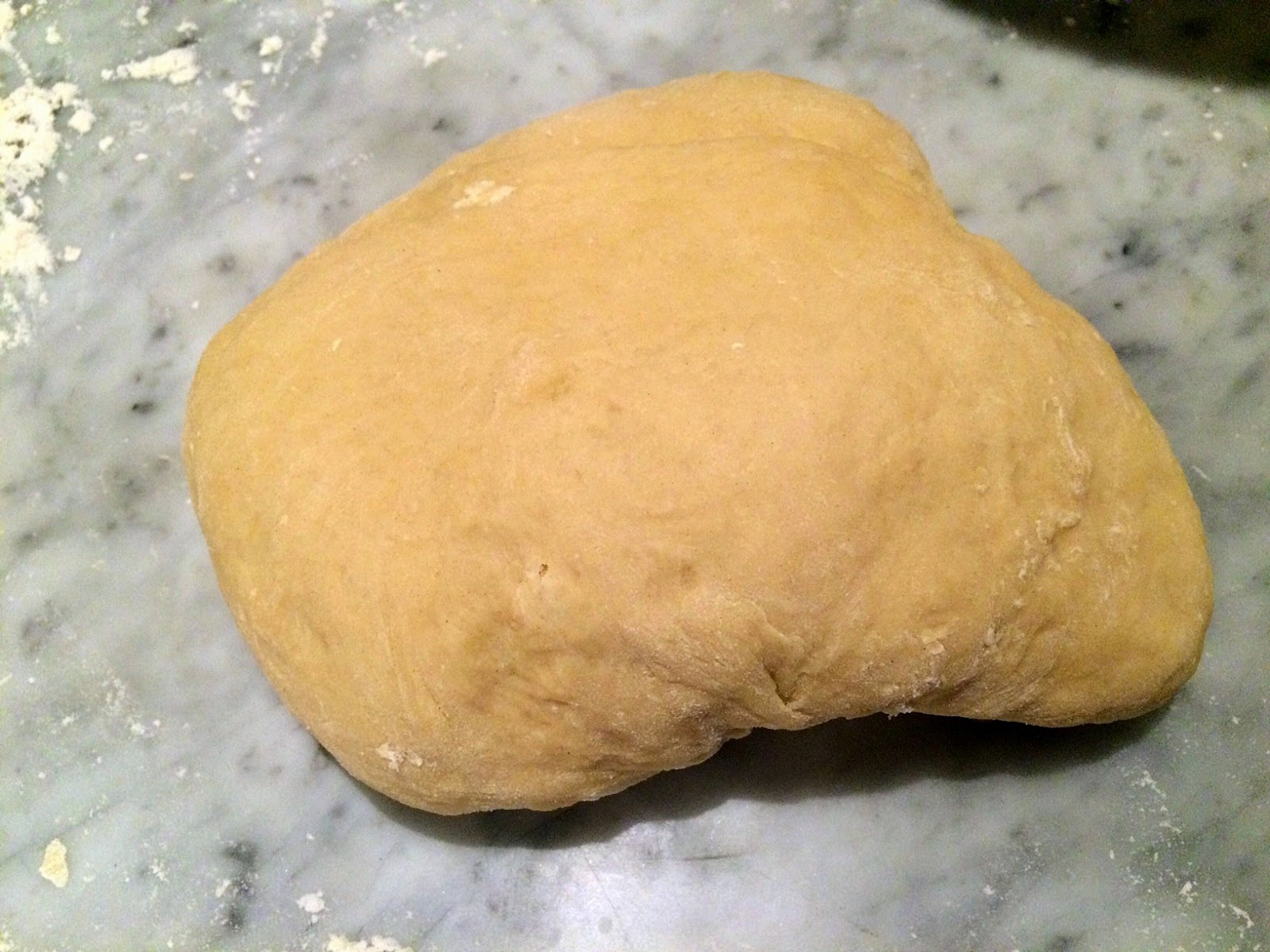 If you've refrigerated the dough, remove it the next morning and let it come to room temperature before rolling it out. 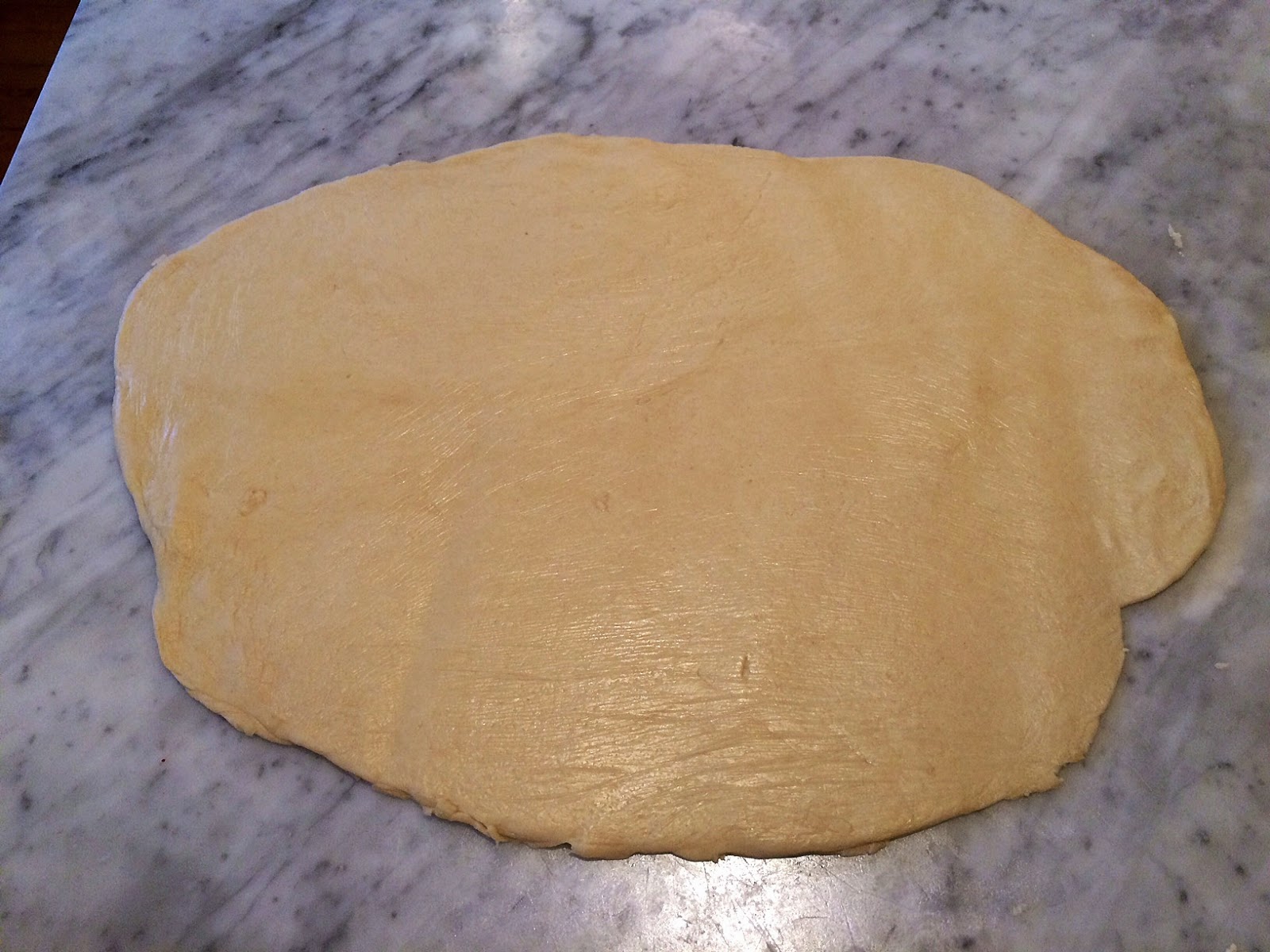 Brush the dough with melted butter, and add cinnamon, brown sugar and nuts. 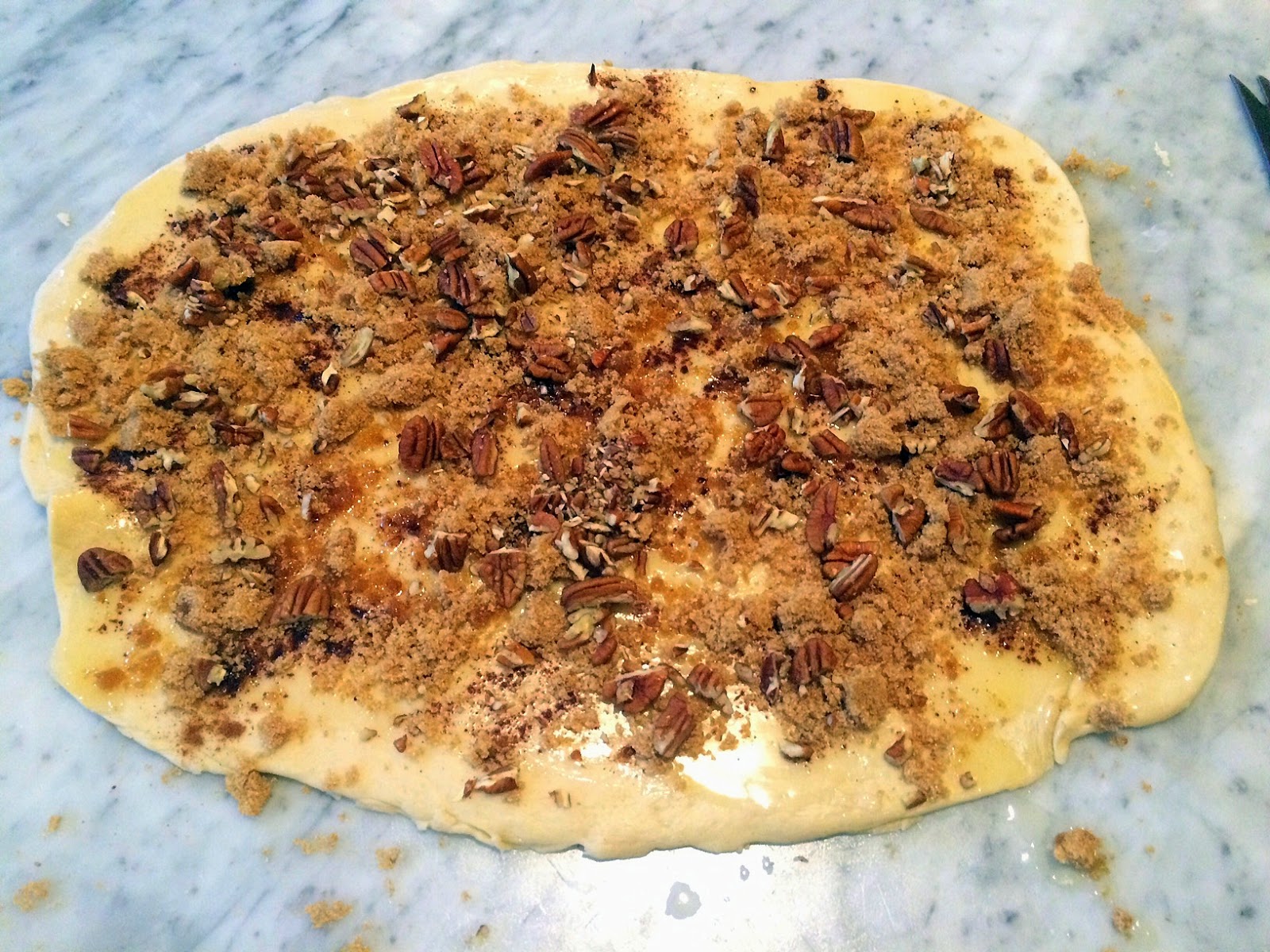 Roll it up from the long end.

Place on a baking pan, covered with parchment paper, and slice the "rolls." Cover and let it rise for about 30 minutes. 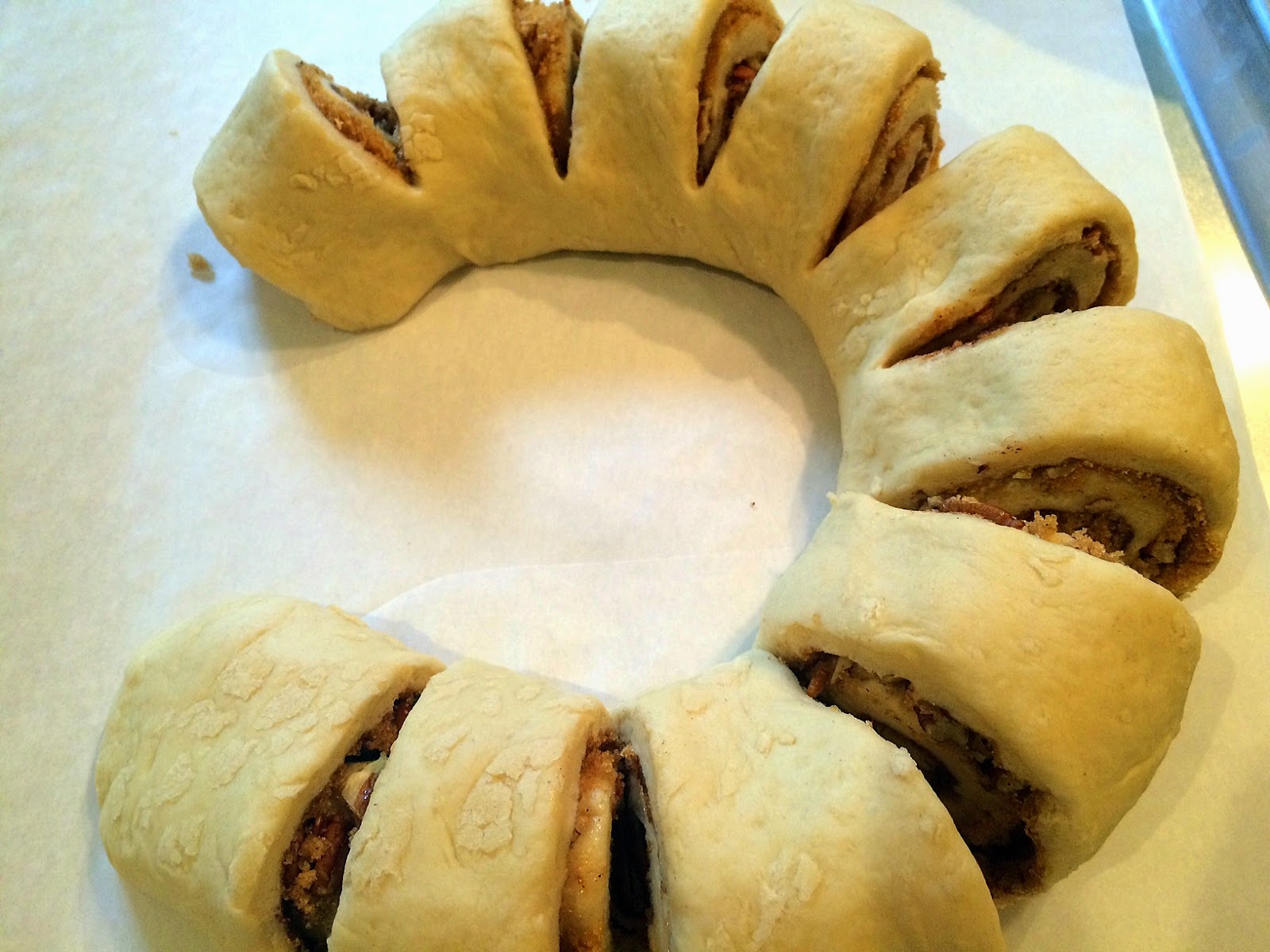 Bake about 30 minutes. While it's baking, make the icing and pour it over while the cake is still warm. 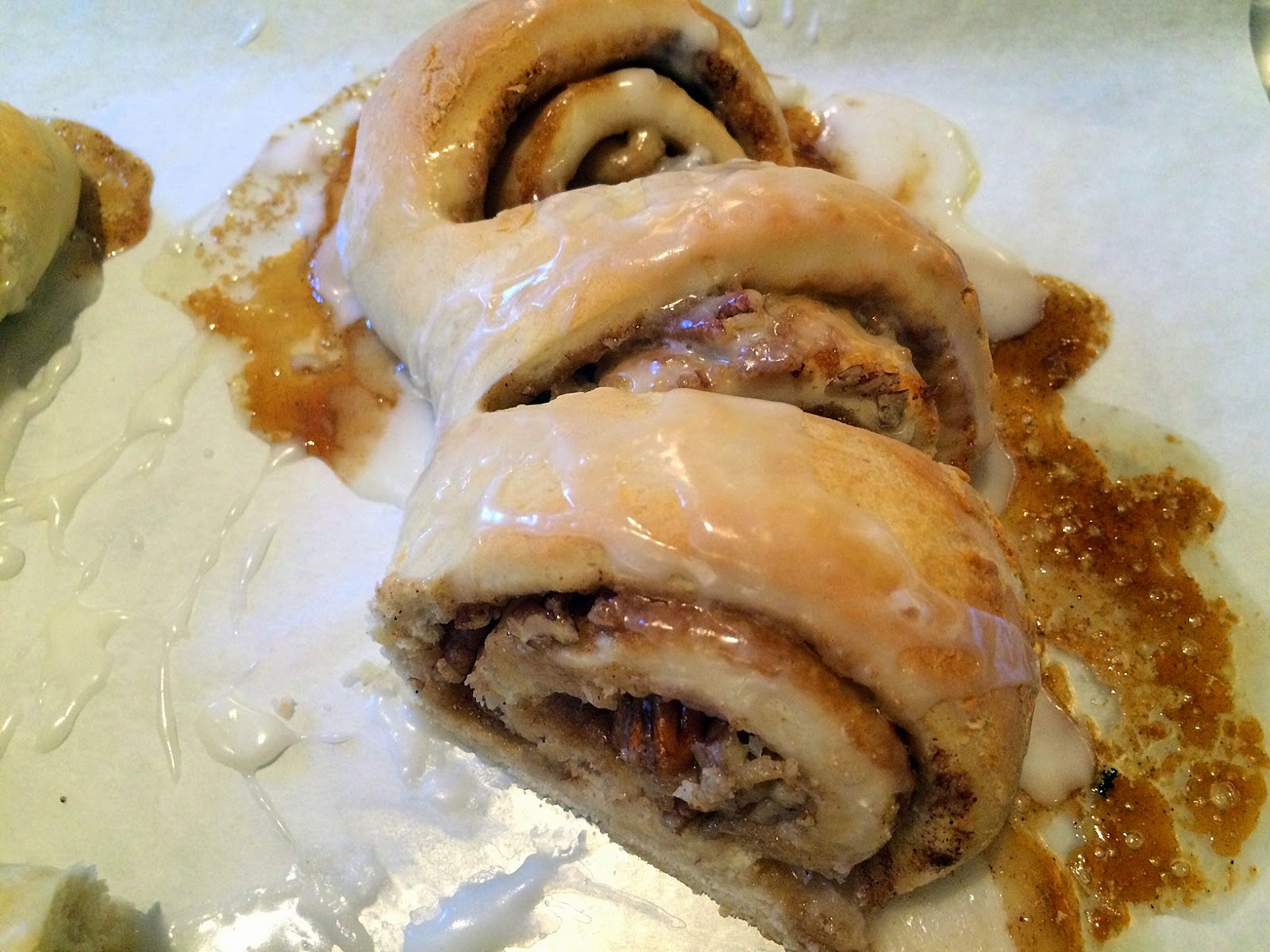 Production notes: I made just half of the recipe and got one large coffee cake from it. (The original says it makes three). I used two packets of active dry yeast instead of the one cake called for, and butter instead of shortening, but otherwise followed the recipe exactly. 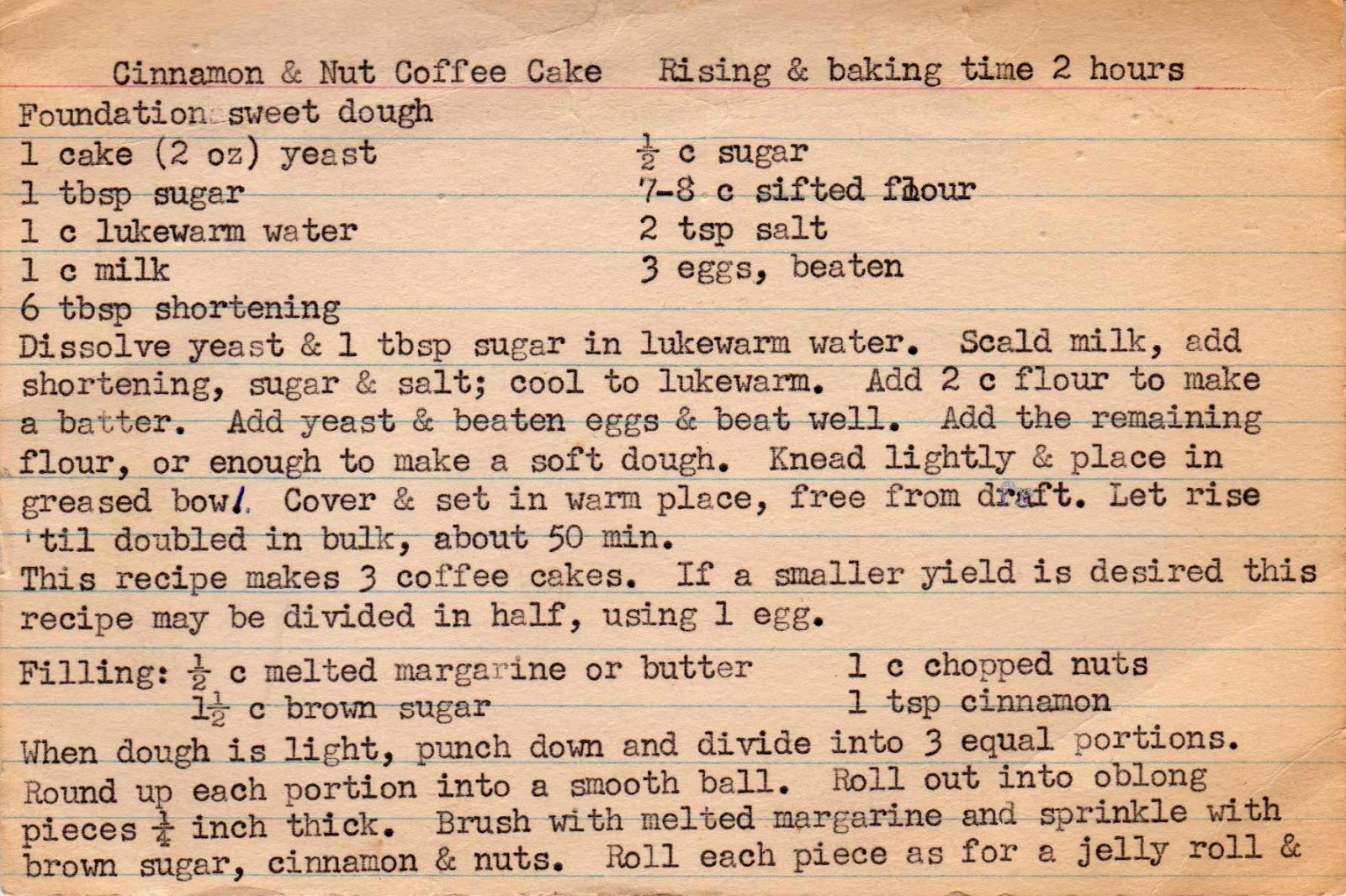 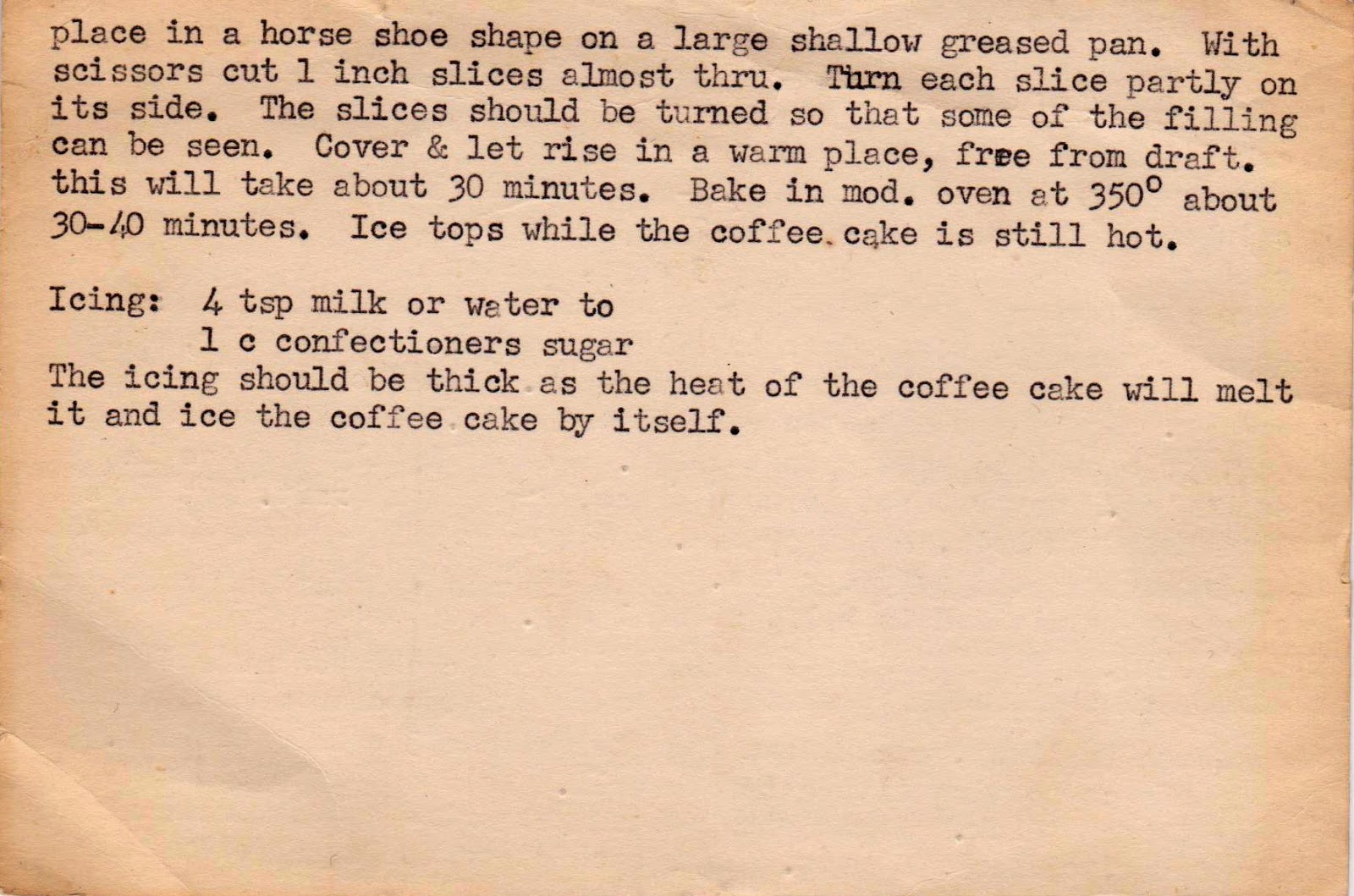