Last weekend, DH and I took our daughter on a whirlwind 36-hour trip to New Orleans to visit our son, a senior at Tulane, and while we were there, well why not have a praline or two.  If it isn't already the official candy of the city, it should be. 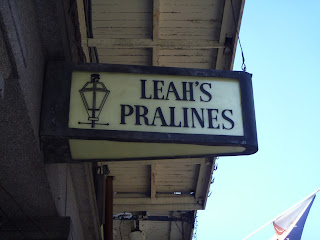 As we made our way around town, I stopped at every candy store (and every store selling candy) to buy a praline.  I collected about 15.* The idea was to bring them home, photograph and sample them, and then prepare a fascinating blog post.

Well, dear readers, that was not to be.  For while we were awaiting take-off at the NOLA airport, a fellow passenger had a panic attack and bolted off the plane. During the rather lengthy wait that ensued (all the luggage had to be unloaded in order to remove this passenger's suitcase), I decided to have just a small taste of one of my treasures.  Then, more time passed, and these candies kept calling my name,  and before you could say, "we're starting our final descent," I realized I had eaten nearly all of the pralines! 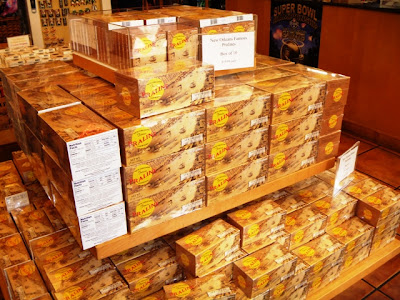 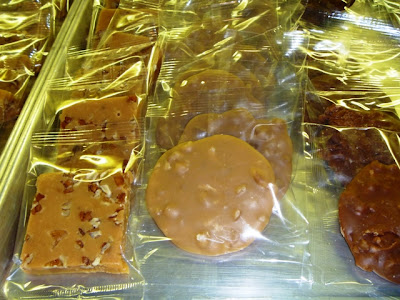 So there was only one thing to do (after joining Weight Watchers and Candy Anonymous) and that was to make a batch of pralines back in Brooklyn.  I didn't want to get my heart broken (as so often is the case when making candy from old, cryptic recipes), so I used a tried-and-true recipe from the Sunday New York Times Magazine from 2002, instead of an "original" from The Picayune's Creole Cookbook, c. 1901,  my friend Renee had lent me.


These were easy and delicious, but a good candy thermometer is essential.  There are few things more satisfying than to watch as sugar and butter magically transform into something else, in this case a sweet and smoothly textured addictive candy.  The one addition I would make to the recipe (below) is to toast the pecans first.


NOLA, it turns out, has quite a history with pralines:
Even before the Civil War and Emancipation, pralines were an early entrepreneurial vehicle for free women of color in New Orleans. In 1901, the Daily Picayune (a predecessor to today's Times-Picayunenewspaper) described in nostalgic terms the "pralinieres," or older black women, who sold pralines "about the streets of the Old French Quarter." They were often found patrolling Canal Street near Bourbon and Royal streets and around Jackson Square in the shade of the alleys flanking St. Louis Cathedral. And in the 1930s, the Louisiana folklorist Lyle Saxon, writing in the book "Gumbo Ya-Ya," documented praline sellers "garbed in gingham and starched white aprons andtignons," or head wraps, fanning their candies with palmetto leaves against the heat and bellowing the sales pitch "belles pralines!" to passersby.

*These days, all sorts of pralines are sold -- rum and maple flavored, chocolate, sweet potato and more.  For my purposes of comparing, I bought only those labeled original, or classic, pecan pralines.