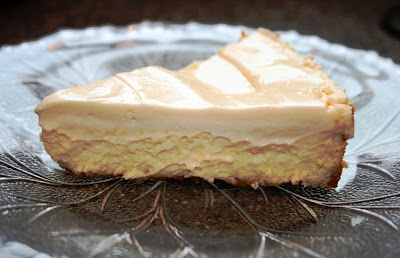 I'd been thinking of making a cheesecake for a few weeks (having tired of apple and plum desserts) and by happy coincidence, I was requested to bring a dessert that was "creamy and not too sweet" to an event recently in Westchester. 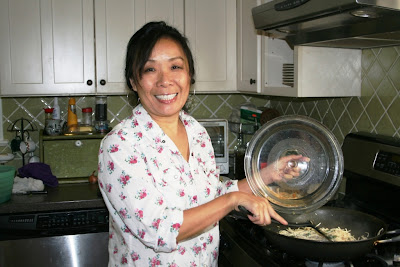 The occasion was a lunch party (so much more decadent than a dinner party) hosted by Betty, a former colleague of DH's who is now a journalism professor (and blogger) in addition to being a fabulous cook. (You can read her blog about the lunch here.)   Betty was raised in Manhattan's Chinatown and, while her mother didn't cook, she taught herself Chinese cooking from a couple of cookbooks, below. 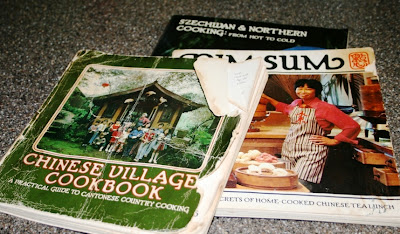 There was no better way to spend a Saturday than sitting in Betty's sunny kitchen (the center of her ultra charming cottage-like house), drinking wine and watching her prepare a delicious Chinese feast which we ate with abandon.  It was a wonder any of us had room for dessert.

The cheesecake I made is from my own collection, a hand-written gem given to me by my friend Barbara, a former neighbor who now lives in the Virgin Islands.  She got it from a diner where she worked in high school, but the recipe is much older, probably from the 1950s.

This is a very creamy cheesecake made with cream cheese and the best thing about it is that is has a "frosting" made of sour cream which not only adds another flavor and texture note, but also eliminates the unsightly cracks that plague so many cheesecakes.  I considered putting some raspberries on top, but it is so good, I decided it didn't need any embellishment.  This cheesecake requires planning; it is supposed to be refrigerated overnight before serving. 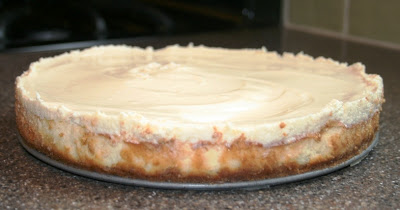 *There are many other kinds of cheesecake.  Our dear friend Mary, also a guest at the lunch, recently made an Italian-style cheesecake for a colleague's birthday and she said that it was so different than mine (in texture, taste, etc.) that it's hard to believe that both desserts are called cheesecake.  The recipe she used, the Sicilian Ricotta Cheesecake from Allrecipes.com, is pasted at the bottom of the post.  She made it with fresh (not commercial) ricotta said it was delicious.  It's a lovely one-bowl recipe that can be put together quickly. I plan to try it the next time I buy fresh ricotta.

Barbara's recipe (the one I used) is below.  I followed it exactly except for the pan:  Do not use a pie pan; use a 9 inch springform pan.  You'll be happy you did. 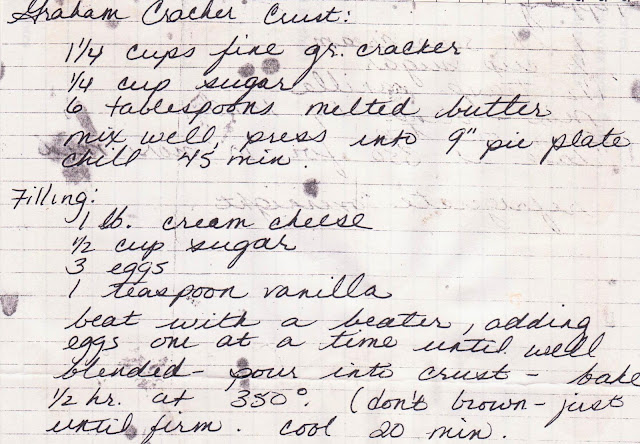