Yes folks, I discovered not one, but two Sausage Cake recipes in my collection.  As in raw pork sausage.  As in no fighting over who licks the bowl. 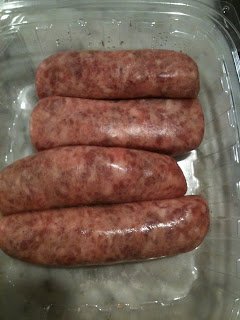 I wanted to bake something from the c. 1940 Chambers stove cookbook I purchased recently at a flea market and that I had been looking for for nearly 15 years, ever since I got my Chambers stove.  But disappointingly, the recipes all seemed so pedestrian -- until, that is, I turned the page and found this treasure. 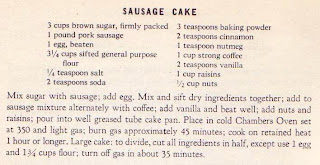 I never thought I'd see "sausage" and "cake" next to one another, but here it was.  And I was intrigued. The cake was easy, if weird, to make. I'm used to softening butter and measuring sugar, not removing casings from sausage.  I probably overbaked it, because I just couldn't imagine that all that sausage could cook through in just 40 minutes. 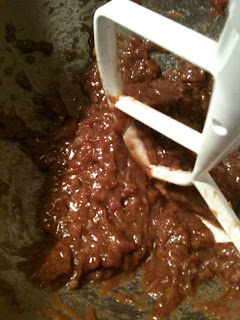 The next day, when I put the cake on the conference table at work, I had the foresight to scribble on a Post-It:  Not Vegetarian. No one at work could guess cake's secret ingredient, although one rather non-adventurous eater literally spit it out when told of the sausage.

Sausage cake takes the one-pot meal concept to a whole new level: main course and dessert all in one! It's really quite efficient as I discovered the next morning when I had a big slice for breakfast figuring that it was like eating eggs, sausage and a muffin, all in one.

The other sausage cake recipe in my collection is from the Indiana Rural Letter Carriers' Auxiliary Cookbook, c. 1977, and included a broiled icing (below) made of brown sugar, coconut, butter, nuts and cream. I added that to my cake, figuring if the cake didn't work out, we would certainly enjoy the topping. 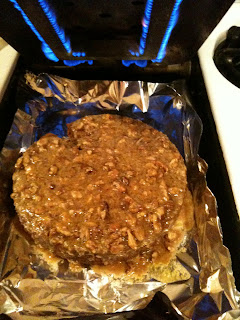