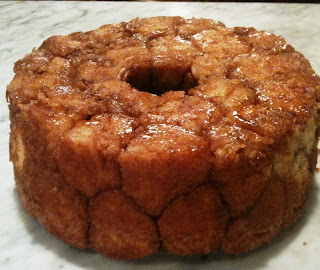 Merde!  Pardon my French, but that was the first word to escape my lips when I awoke with a start at 5 a.m. this morning and realized that the cake I made last night was probably cemented in the pan because I chose sleep over waiting for it to cool to remove it from the pan when it was still lukewarm.

I rushed down the stairs and with a couple of prayers and my trusty offset spatula, I managed to get the kuchen out in one piece.  Which is ironic, because it's really not one piece to begin with, but a series of balls of yeast dough baked together in a tube pan.  And one literally pulls it apart and eats it with their hands -- no knife and fork required. 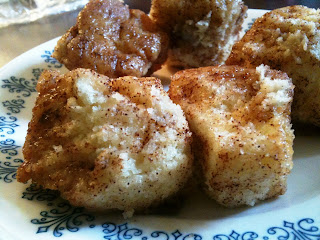 Pull-Apart Kuchen, also known as Monkey Bread, is an interesting twist and presentation on your basic cinnamon bun. It was a family favorite when I was growing up, and is beloved my family-members-by-marriage.  We still talk about the time my brother-in-law Mitch single-handedly devoured an entire kuchen (it serves 12) at a family event.  I was flattered, he being the son of an amazing cook who, until her death last year, made marzipan (and everything else) from scratch. 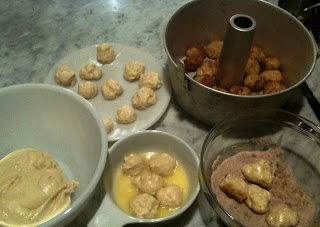 This is an easy, albeit time-consuming recipe best made (like all yeast doughs) during periods of low pressure which enhances the rising of the dough.  Creating an assembly line (above) to form the dough balls, dip them in melted butter and then in a cinnamon-sugar mixture makes quicker(er) work of it. Below, is the dough before the first rise, and the "cake" after the second rise, ready to be baked. 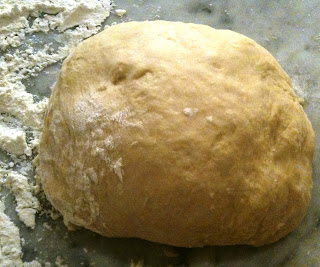 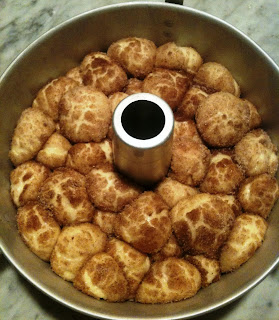 The recipe I used is the one my mother used, and is from the Beth El Congregation Cook Book in Akron, Ohio.  I recommend making it, if you're looking for something fun, delicious and unusual.  And who isn't looking for that? 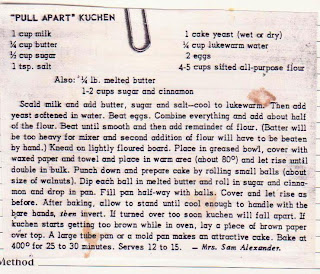 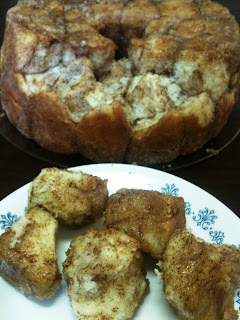