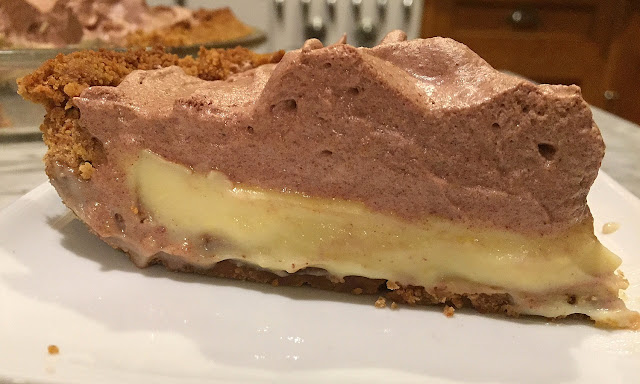 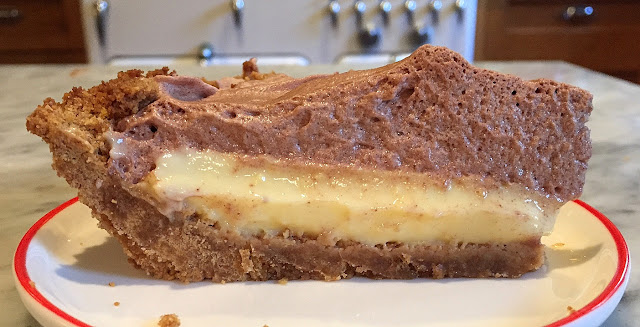 I'm thrilled to present -- on Pi Day, yet -- the most unusual pie I've ever encountered.  Unlike every other chocolate meringue pie, where the custard is chocolate, this one turns convention upside down. The custard is vanilla and the meringue is chocolate. Search as I may, I could not find one other example of this.  The recipe is vintage, probably c. 1940s. If not for the housewife recording (and possibly inventing) this gem, this recipe would be lost to history. Which would be a shame, because it is soooo delicious.

This upside down chocolate meringue pie is light, airy, rather addicting and pretty easy to make.
Below are most of the ingredients you need. 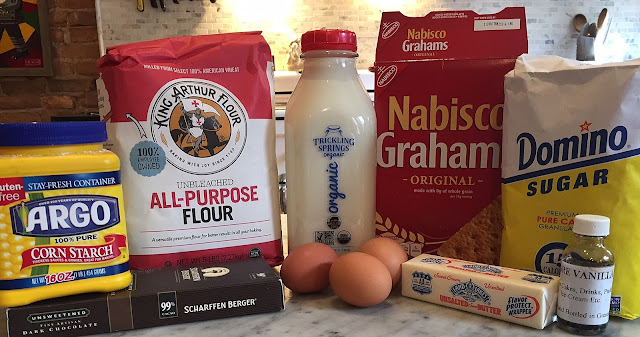 Start the crust by making graham cracker crumbs in a food processor or by placing the grahams in a plastic bag and crushing them with a rolling pin (or wine bottle). Add the melted butter. 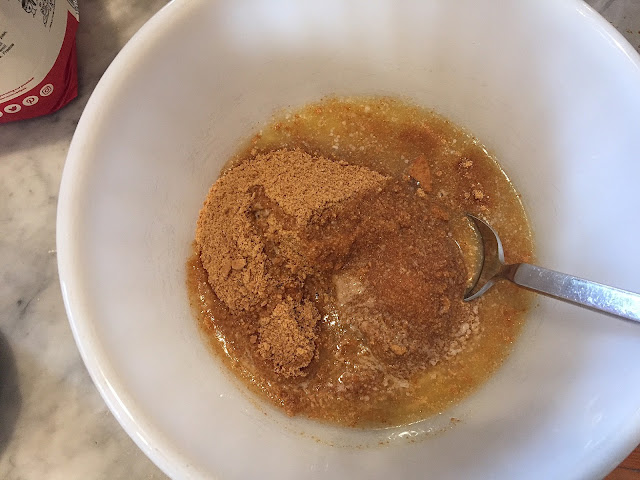 Combine the mixture and place in a nine-inch pie plate. 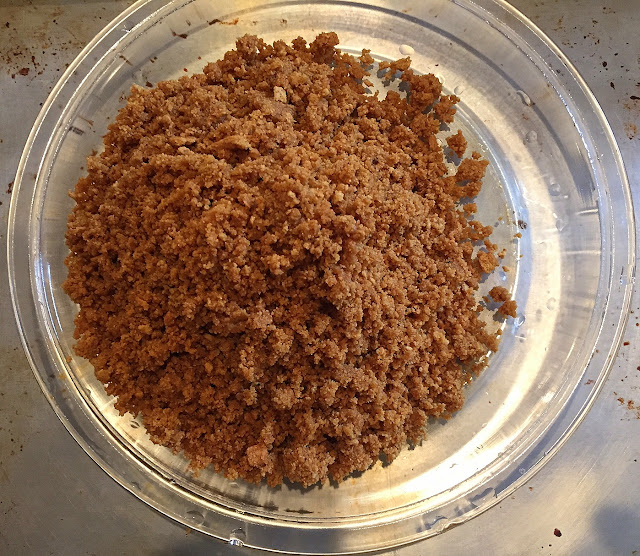 Press the mixture into the pan. 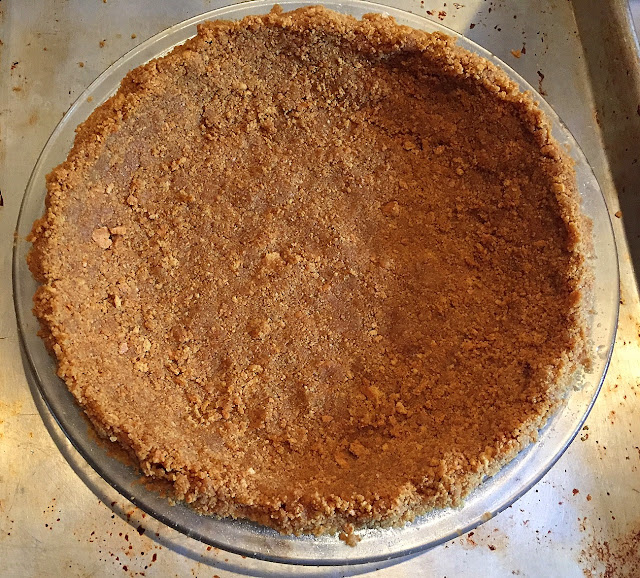 Next, separate the eggs. Because the egg whites (for the meringue) are not cooked, I recommend using non-factory eggs, like those from the farmer's market. 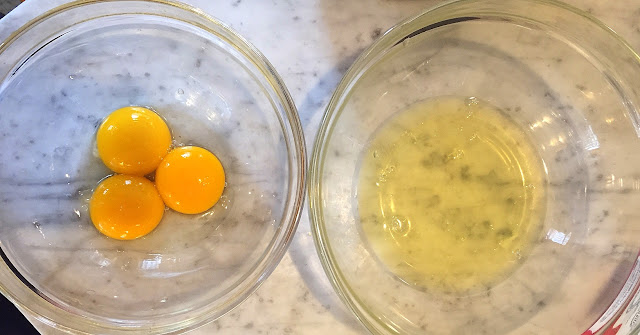 Start the vanilla custard.  The lumps of flour will disappear as the cooking proceeds. 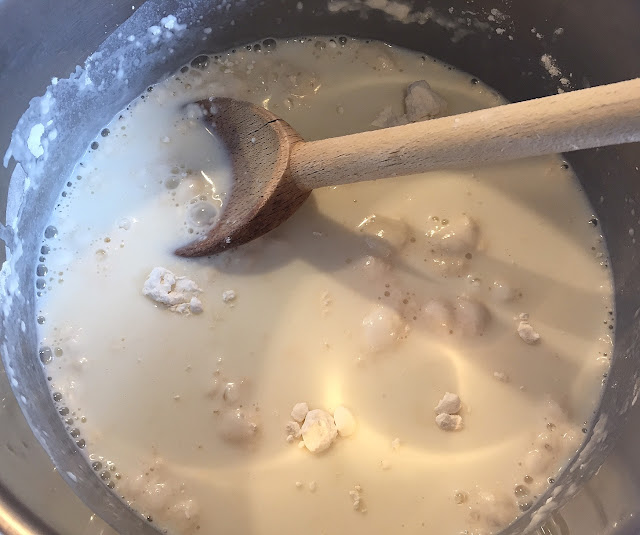 If you're not sure your custard is silky smooth, then push it through a strainer for extra insurance. 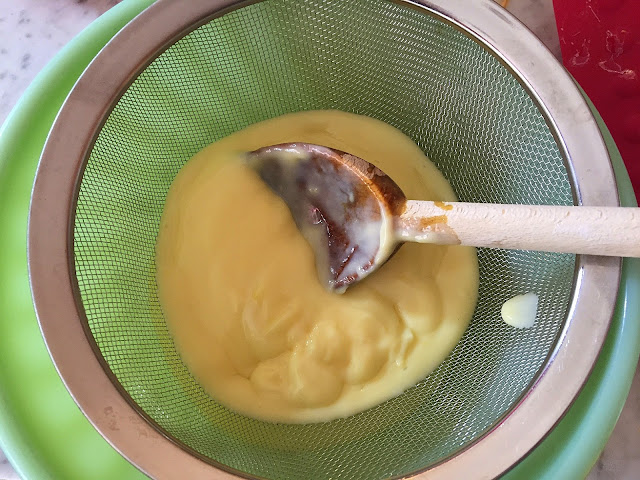 The cooked custard, below. Not sure why it looks so yellow in this photo. 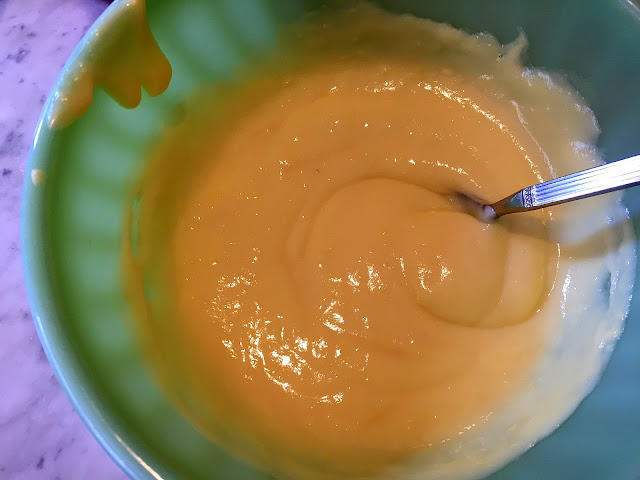 Fill the cooled pie shell with the custard, and begin the chocolate meringue. 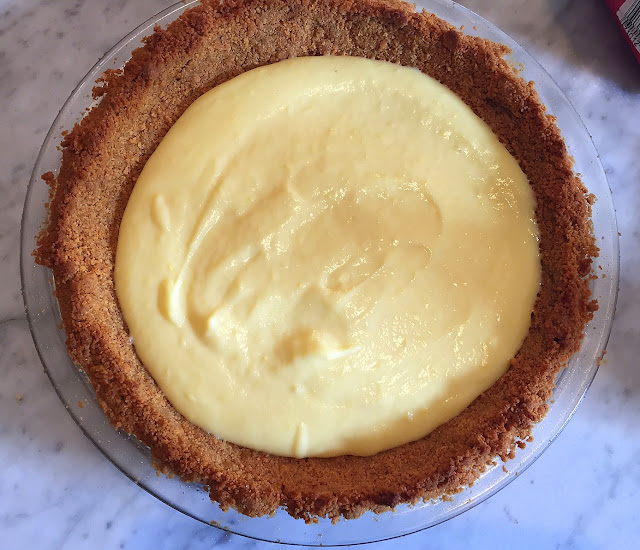 Whip the egg whites until stiff and gradually add the confectioner's sugar. 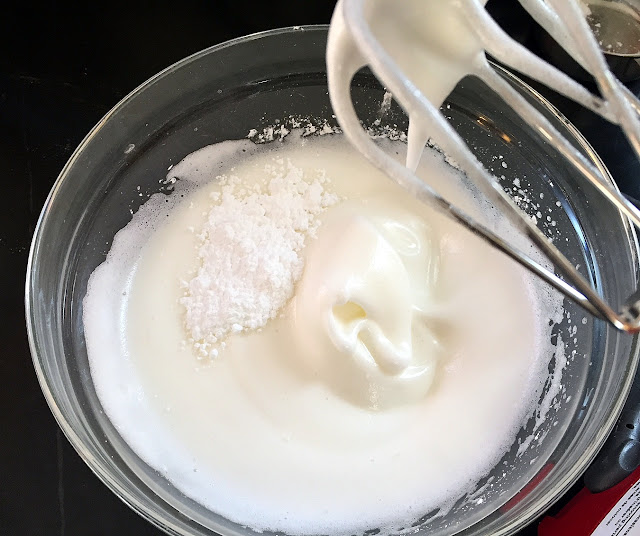 Fold in the melted chocolate carefully and spread over the custard. Be sure to reach the edges. 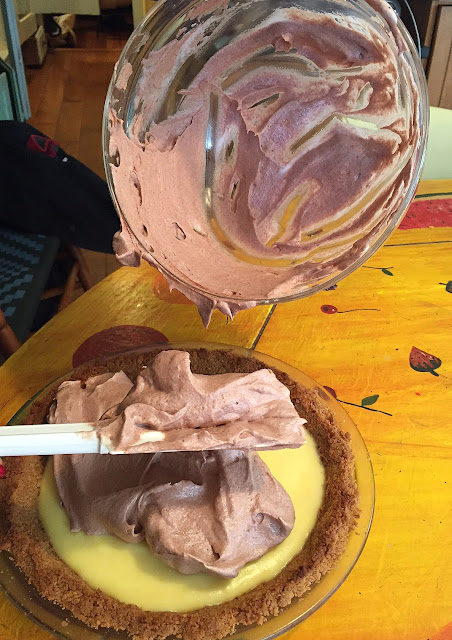 Tada! One indication that this is a vintage recipe is that proportions are modest.  Neither the filling nor meringue are "supersized." 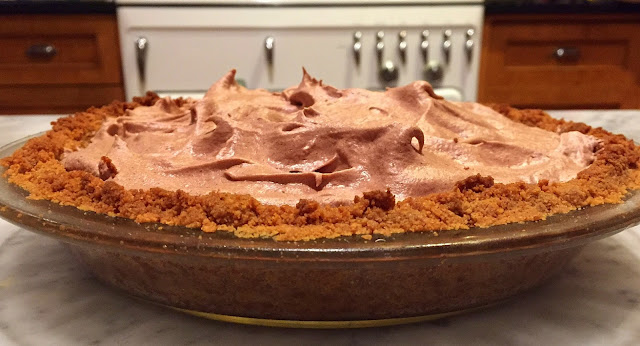 The pie kept well in the refrigerator for two days! 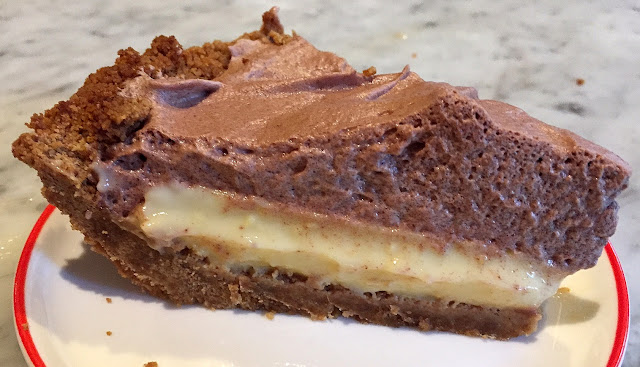 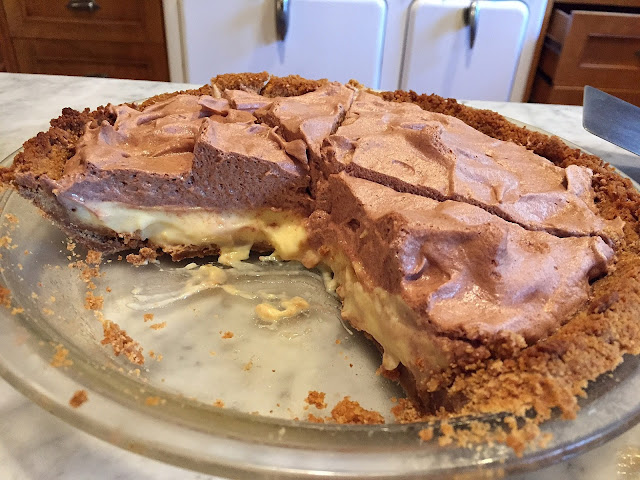 Production notes for the crust: I used butter, but Nucoa is a margarine that first appeared in the 1930s, and is still available but with a different formulation. There's even a Facebook page called Bring Back Original Nucoa (which was dairy and lactose-free). I had to bake the crust about seven minutes, instead of five. 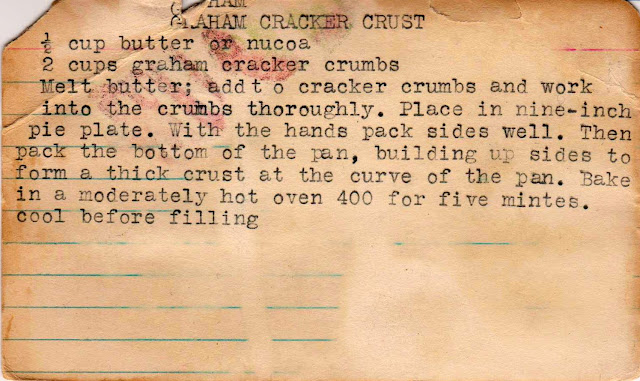 Production notes for filling: To achieve success, you need to beat the egg yolks slightly and temper them. This simply means that you place a small amount of the hot custard into the eggs while stirring to warm them before to the very hot custard. If you just added them, you'd have scrambled egg yolks. Although the instruction wasn't there, I stirred the vanilla into the custard at the very end. 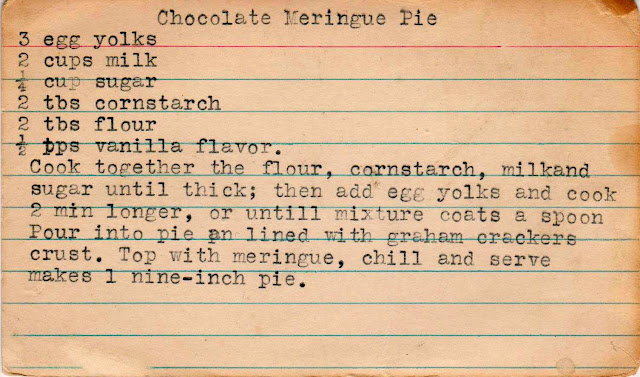 Production notes for filling: I always use cream of tartar when beating egg whites, which prevents overbeating. I think salt serves the same purpose, though. Fold the melted chocolate very carefully into the egg whites to prevent them from deflating. I used a plastic spatula for this. 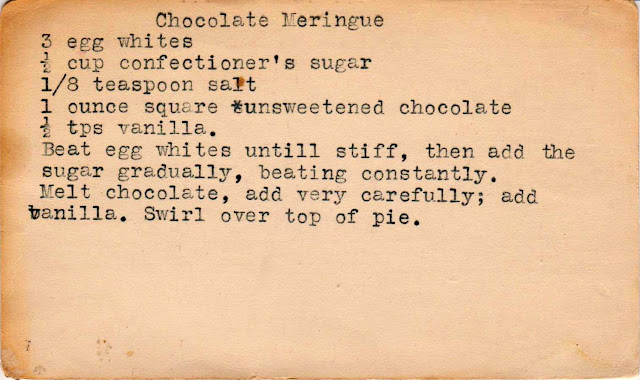 This pie was enjoyed with some of the fine people renovating my house, like Zeke, a musician and cabinetmaker who worked on my beautiful new closet, designed by Robert Kalka. 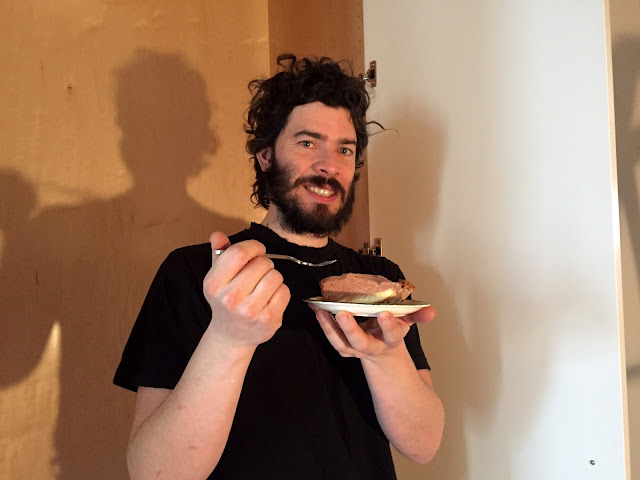