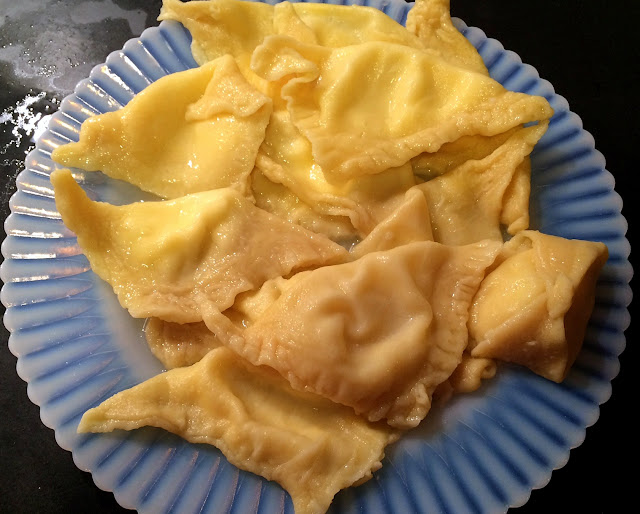 A few months ago, I agreed to demonstrate kreplach making at the Museum at Eldridge Street's annual Egg Rolls, Egg Creams and Empanada Festival, which takes place next Sunday to celebrate the Lower East Side's delicious cultural diversity.

Having never made kreplach before, I thought I'd better practice at least once. (This reminds me of the joke about how medical residents learn new procedures: see one, do one, teach one.) But having made about a dozen apple strudels, which require -- as kreplach do -- rolling the dough nearly paper thin, I felt up to the challenge, even though I've never seen a kreplach being made.

They're not hard to make (but it did take me two attempts to get the dough right) and though the DH said they "look terrible," I thought they tasted pretty good.

I began with a recipe given to me by my friend Hanna (who works at Eldridge Street, and extended the demo invitation). It's from her mother's "bible," the Avodath  Sharon [Massachusetts] cookbook. I had only moderate success with the dough -- but the cheese filling recipe is divine and very easy.

To perfect the dough, I combined Hanna's recipe with one I found in Arthur Schwarz's Jewish Home Cooking, my bible for Ashkenazi recipes. The recipe is at the end -- but if you're in town, do stop by the festival to witness the demo!

Begin by making a well in the flour. Add two eggs and some water. 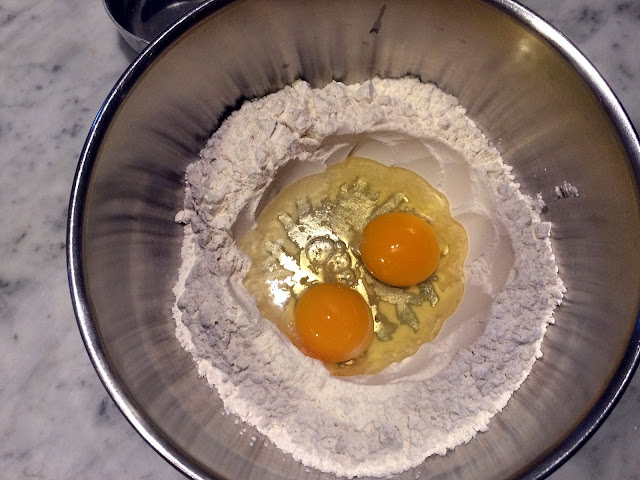 Beat the eggs and water together, and slowing begin incorporating the flour in to the the liquid. 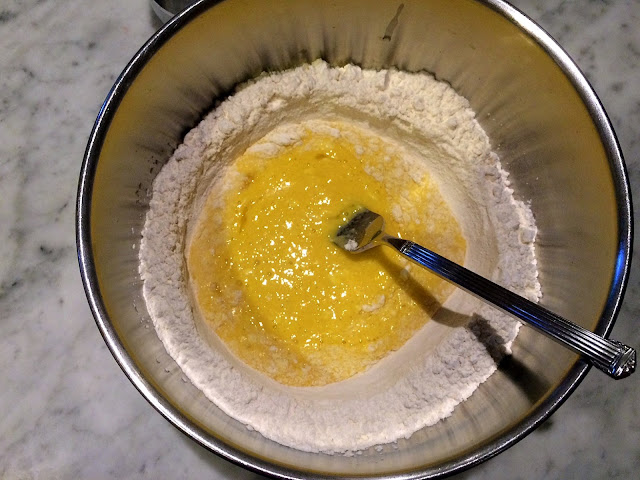 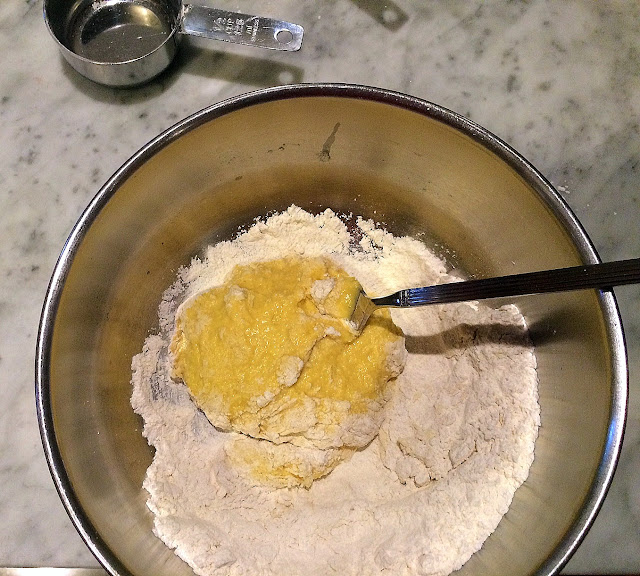 And then get shaggy like this, at which point it's time to use your hands to blend it all together. Turn it out onto a floured surface and knead until it's smooth and elastic. 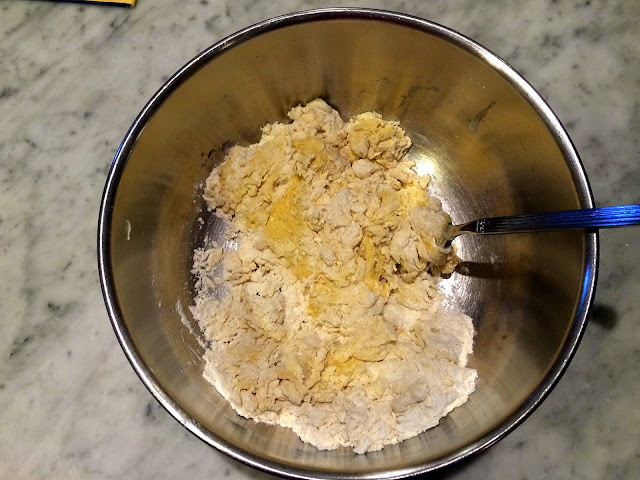 Let the dough sit covered for about 30 minutes to relax the gluten. Then begin to roll it out. 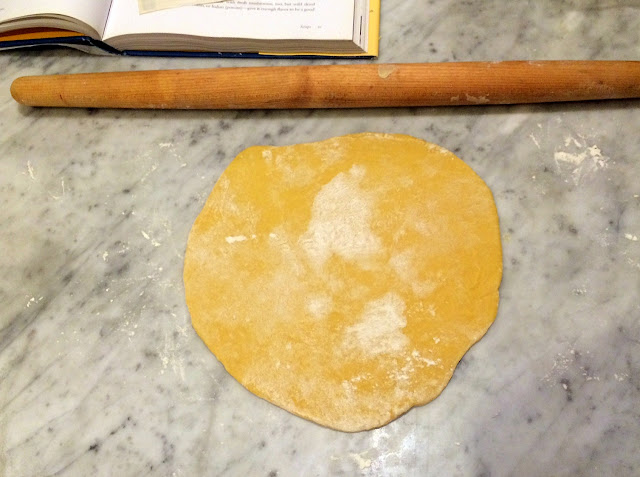 And keep rolling until it gets very, very thin. 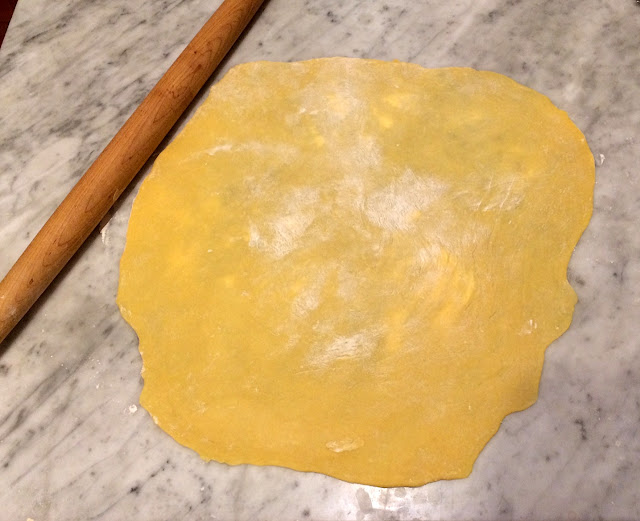 Cut into 3-inch squares, using a knife or a metal bench scraper (which worked much better). Put a small amount -- a teaspoon or less -- of filling in the center of each square. 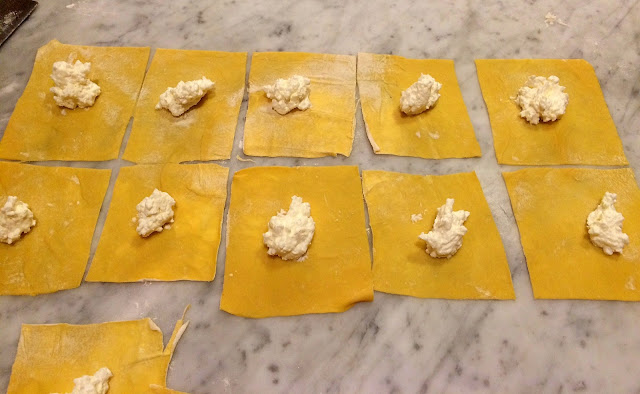 Using your fingertip, wet the edges with water, and fold the dough from point to point to create a triangle. 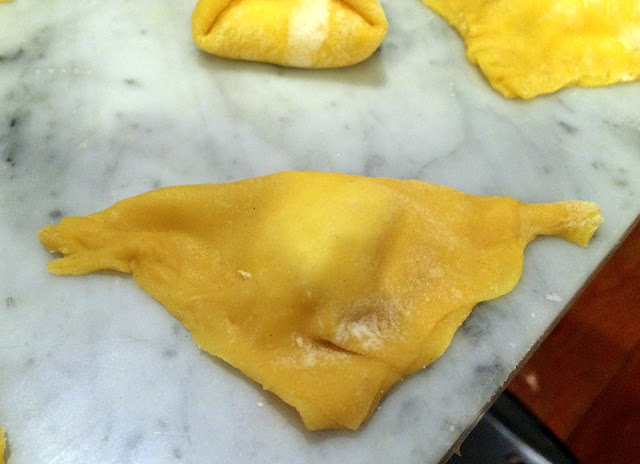 Let the dumplings sit for about ten minutes, while you get a pot of water to come to the boil. 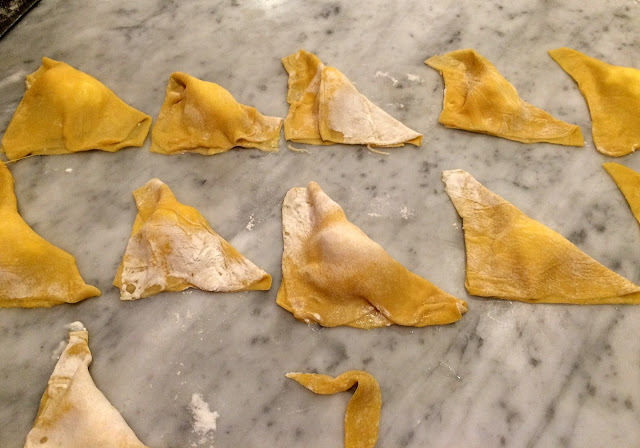 Add a very liberal amount of salt to the water, let it reach a boil again and carefully add the kreplach to the pot. Boil for 10 to 15 minutes. 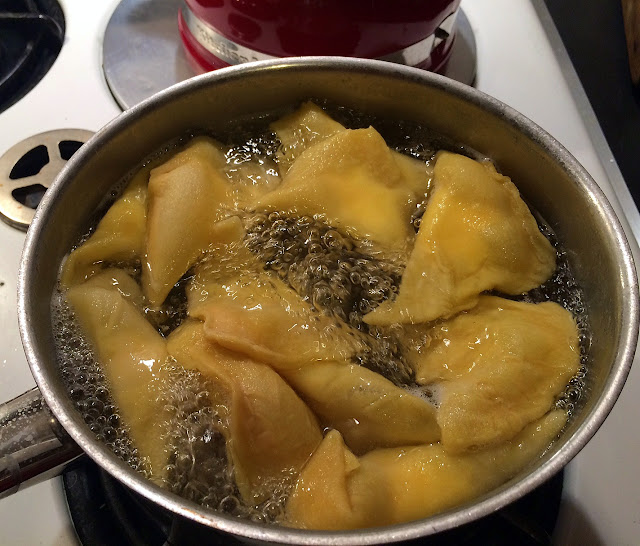 Put flour in a large bowl and make a well. Break two eggs in the center, and add the water. The actual amount of water needed will vary slightly, depending on the humidity, etc.
With a fork, blend the liquid portion together and then slowly being incorporating the flour until the dough gets shaggy.  Use your hands to finish the job. Then knead the dough on a floured surface until it is smooth and elastic.
Cover with plastic wrap and let the dough rest for 30 minutes, while you make the filling.

Place ingredients in a bowl and mix until well combined. (Best accomplished with an electric hand mixer.)

Divide the dough in half. Working with one half (while the other remains covered), roll out on a floured surface until very thin.  Cut into 3 inch squares. Working quickly, place a scant teaspoon of filling in the center of each square. With your fingertip. wet the edges of each square and fold over, to make a triangle. Seal the edges very well.

Let dumplings sit for ten minutes before boiling in salted water for about 10 to 15 minutes.