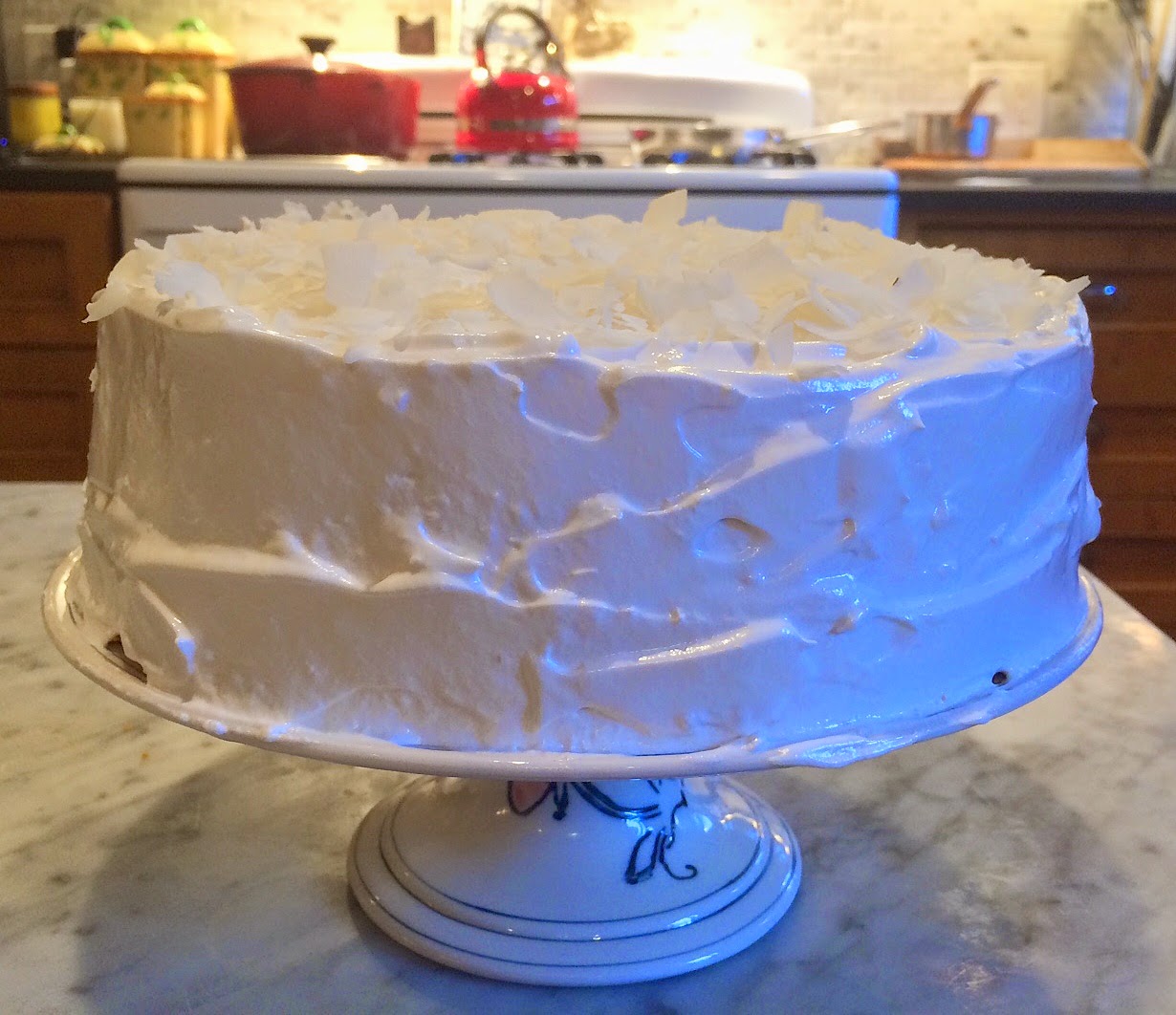 We celebrated the DH's birthday on Saturday with a cake made from a recipe that's probably a bit older than he is.  White Coconut Cake (his request) is an old-fashioned white cake (meaning only egg whites, no yolks). The only coconut is the shredded variety that's placed atop the frosting.

This is the first time I've seen a cake recipe calling for egg whites that are added directly to the batter without whipping separately, a real time (and bowl) saver.  It's a very easy cake. In fact, I prepared it while the DH was taking one spin on his bike around Prospect Park -- it's that quick to make.

Mrs. Dumford, the recipe's author, suggested a seven-minute frosting, and I found one, called Fluffy Frosting, in my collection.  Seven-minute frosting, once a standard in mid-20th century kitchens, has fallen out of favor (often replaced with "buttercream" made from butter and confectioner's sugar), but it does have its appeal. It contains no butter -- just egg whites, sugar, corn syrup and water.  The magic happens during the seven minutes of whipping the ingredients in a double boiler.  The result? Everyone (family members, and special guest Andrew, the DS's friend and a champion dessert eater) thought I'd frosted the cake with marshmallow fluff!

Whole Foods, where we'd shopped that morning, didn't have grocery store sweetened coconut, so I bought the large flaked unsweetened coconut, organic (of course!). It worked perfectly, as the cake and frosting were pretty sweet, just like the DH. 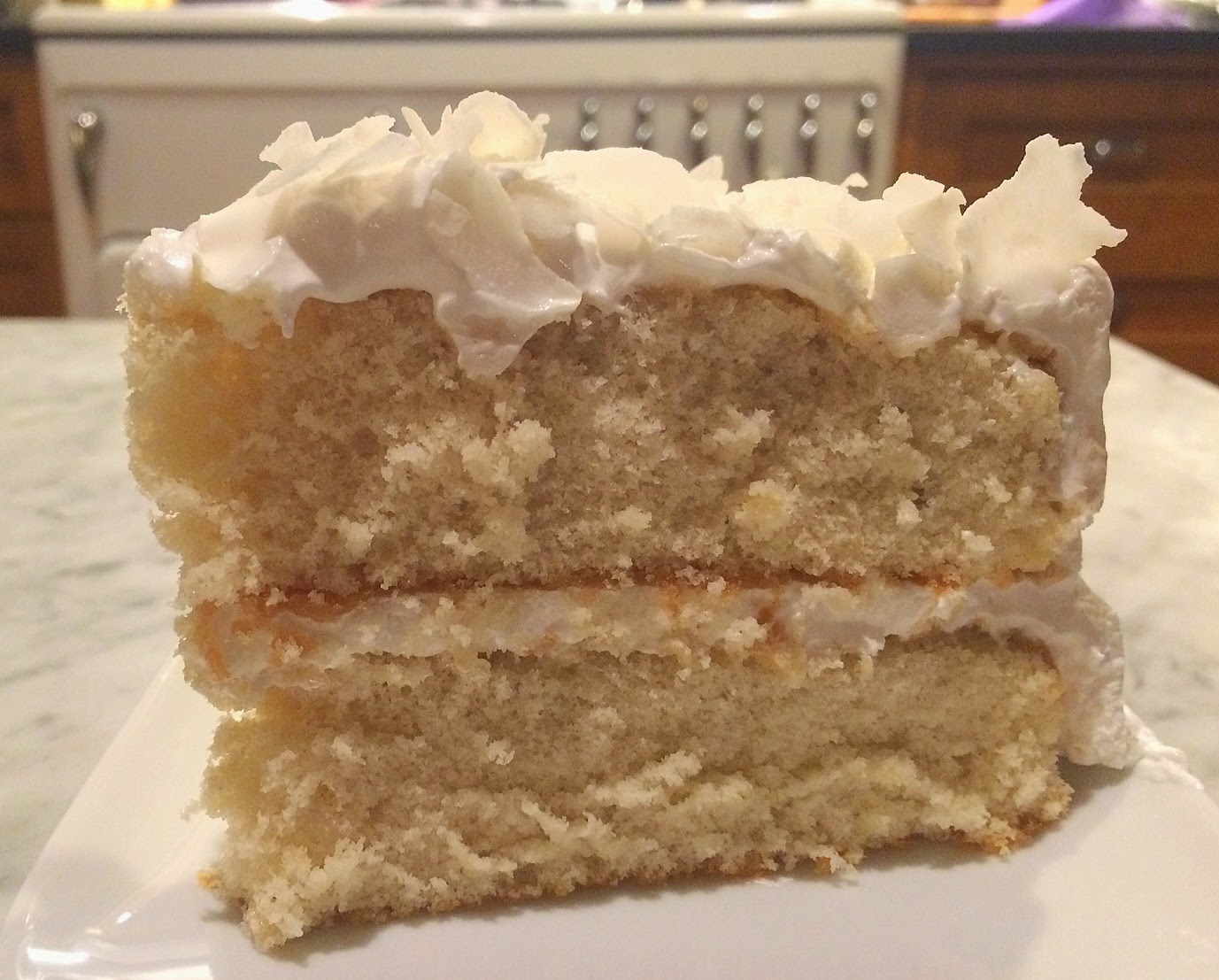 Begin by creaming the butter and sugar. Mine didn't get as "light as whipped cream" as Mrs. Dumford instructed, but it didn't matter. 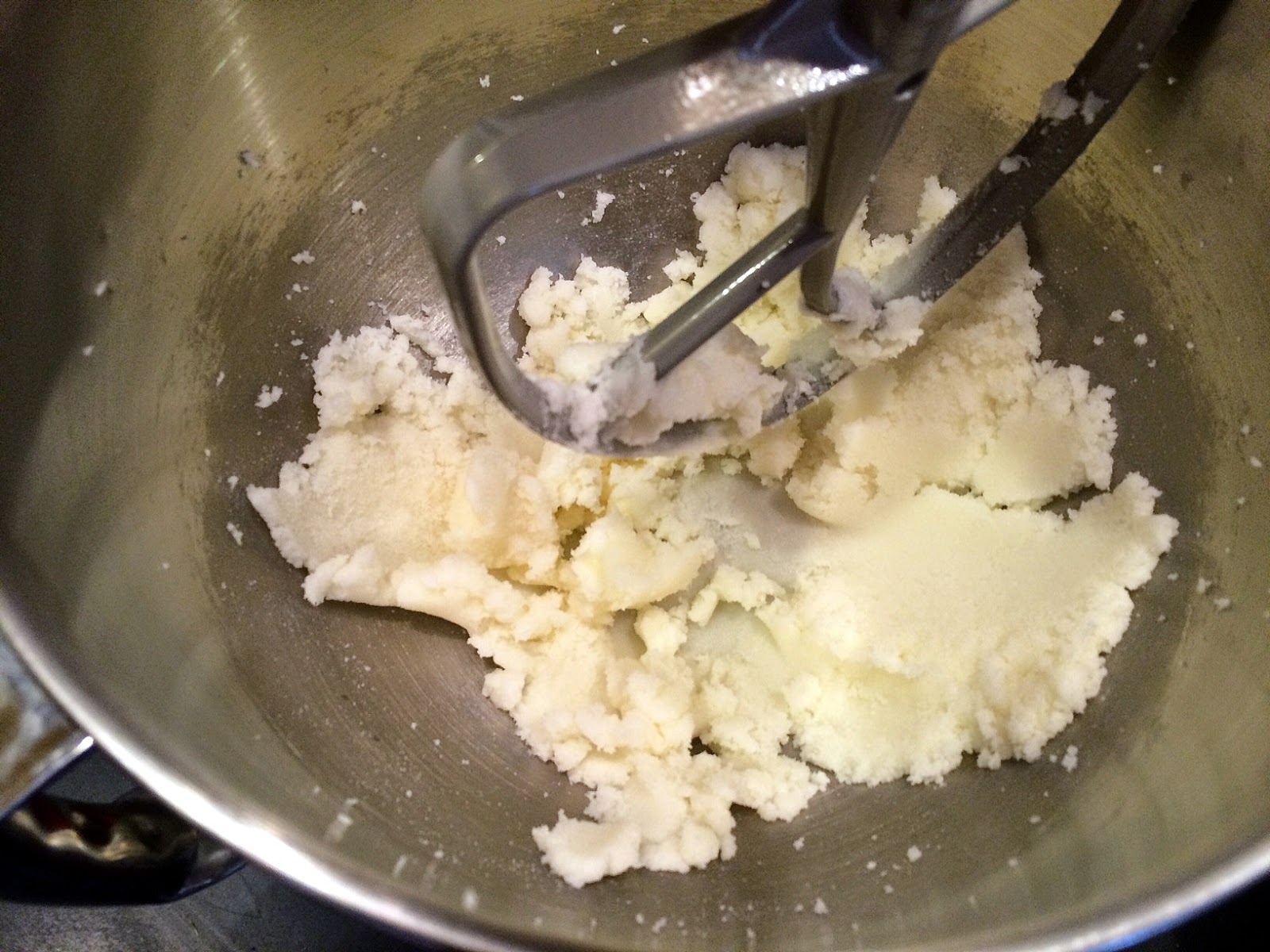 Add in the unwhipped egg whites. 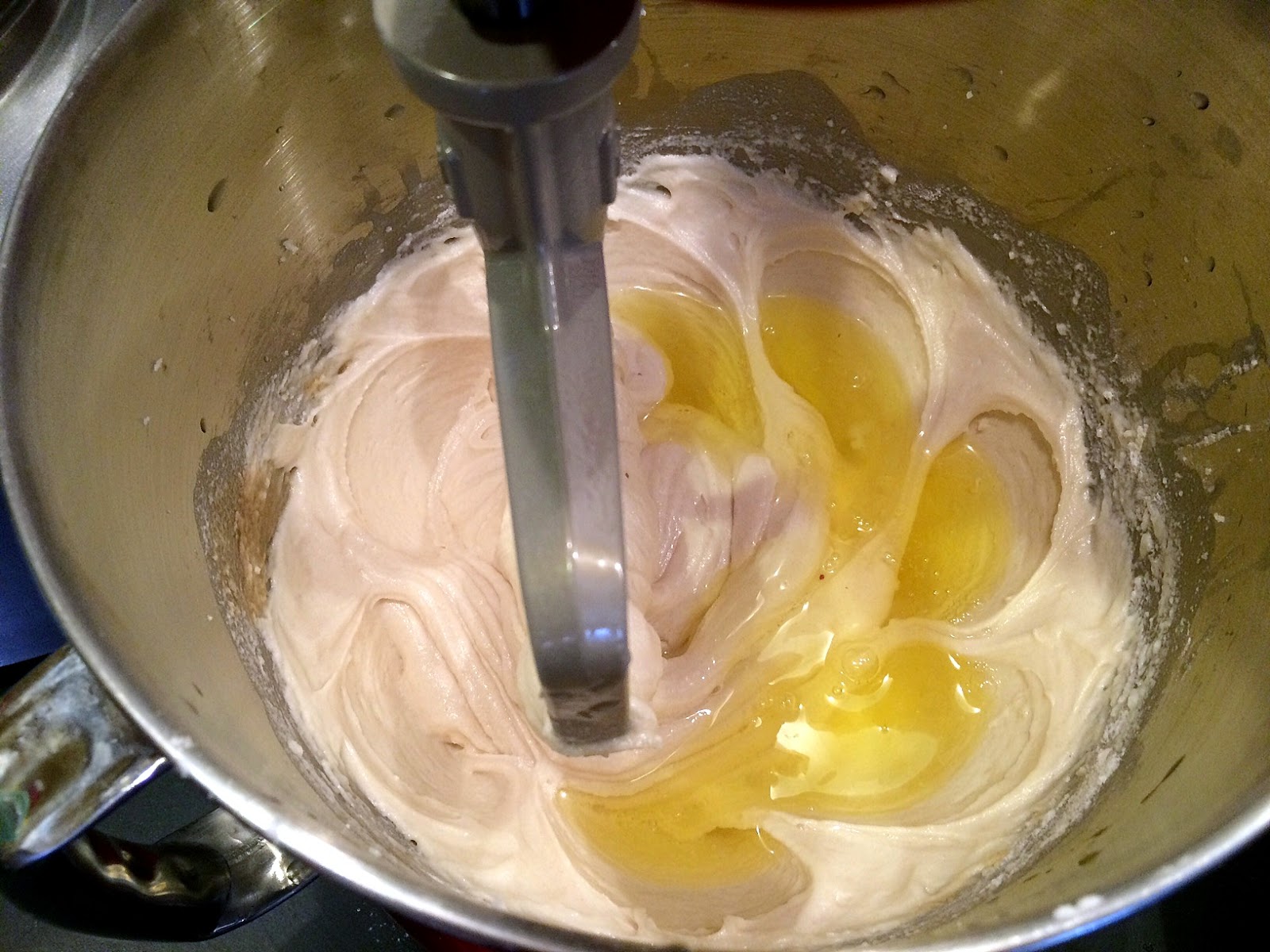 The batter is thick, so coax it to the pan edges, using an offset spatula, butter knife or the back of a spoon. 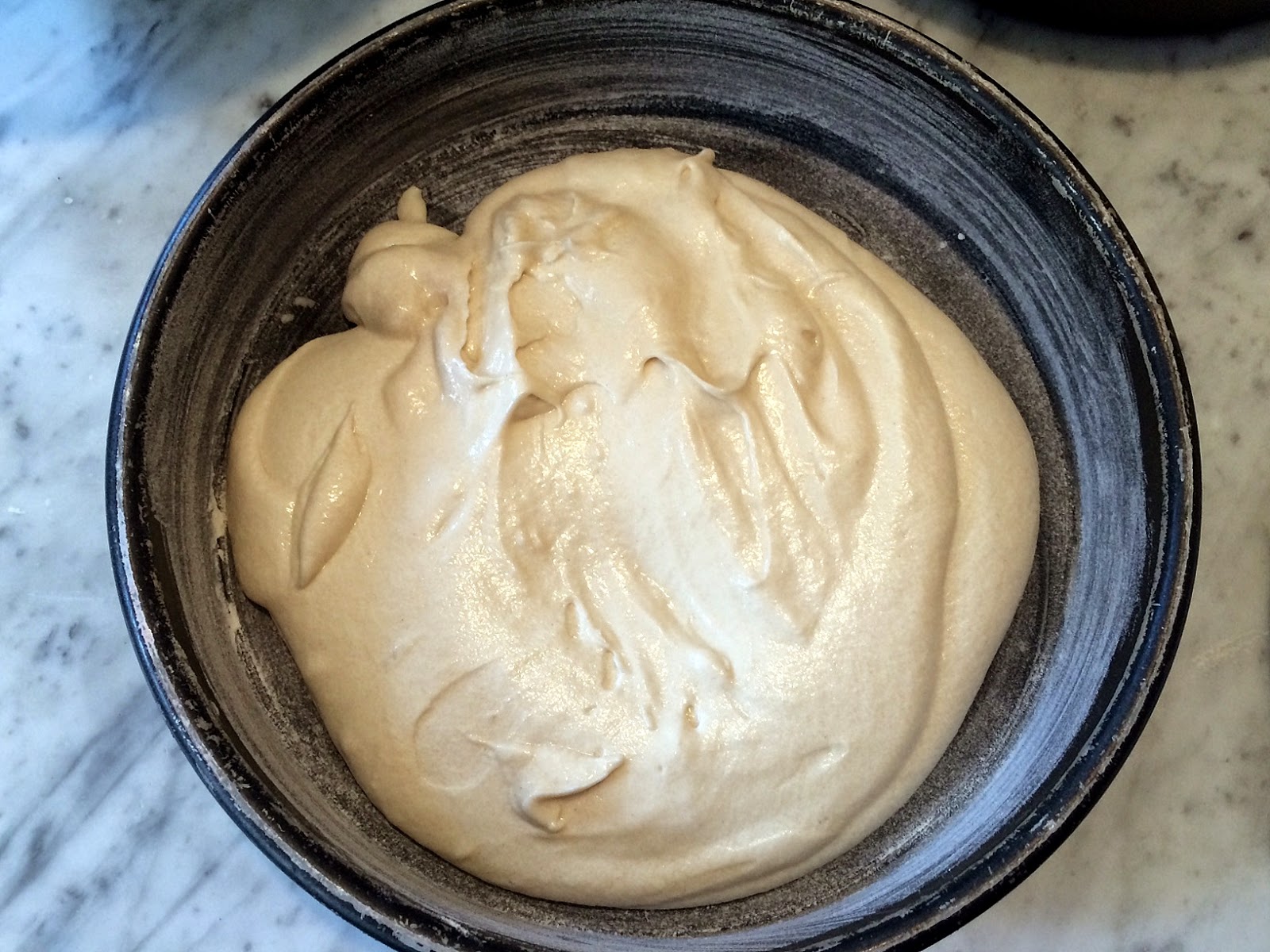 After 20 minutes, test the cake with a toothpick. If it comes out clean, the cake is done. If not, bake another five minutes or so. 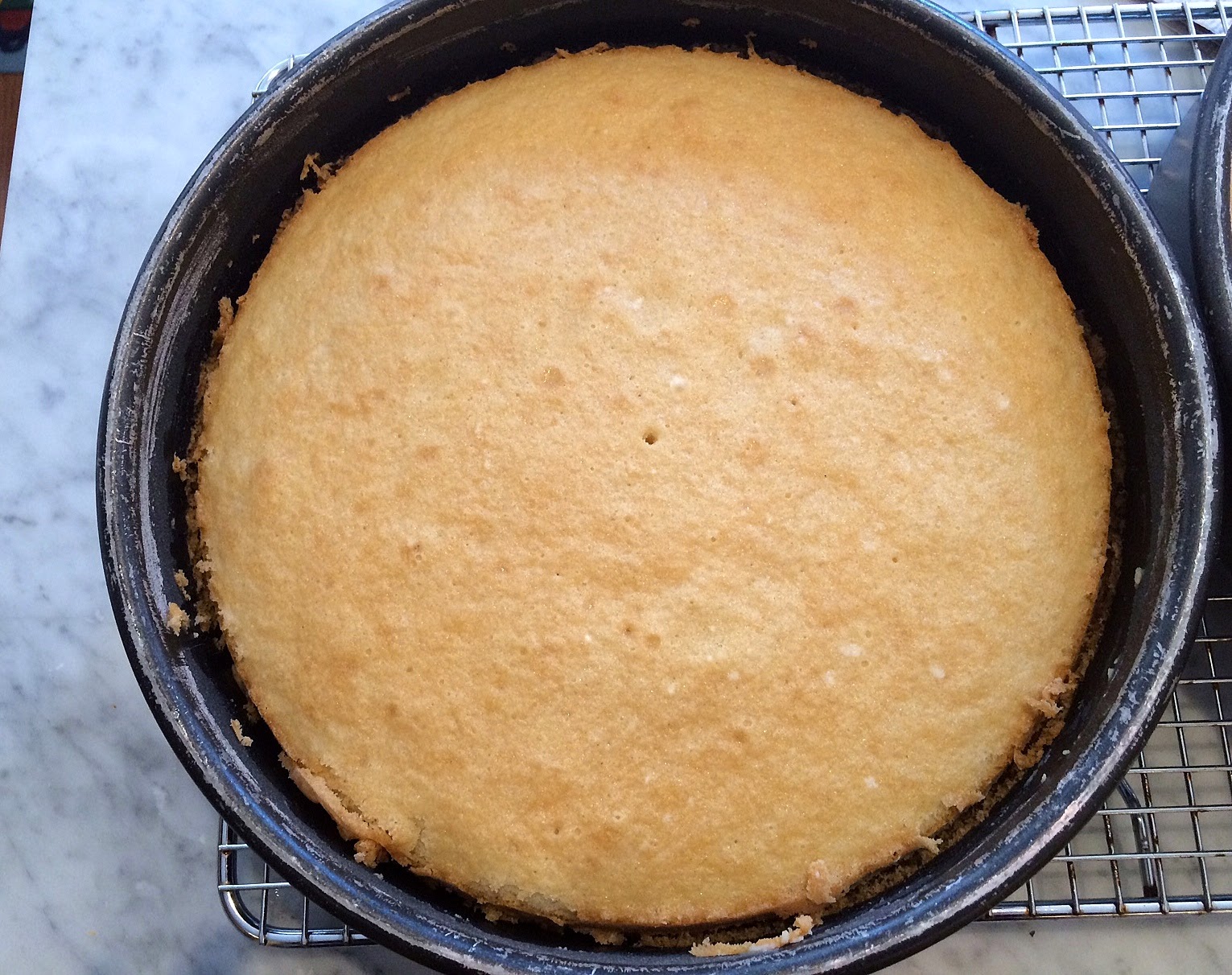 I failed to take photos of the frosting in progress. It's easy, but tedious, as the cook needs to stand over a hot stove while mixing it for seven loooong minutes or until it holds stiff peaks. 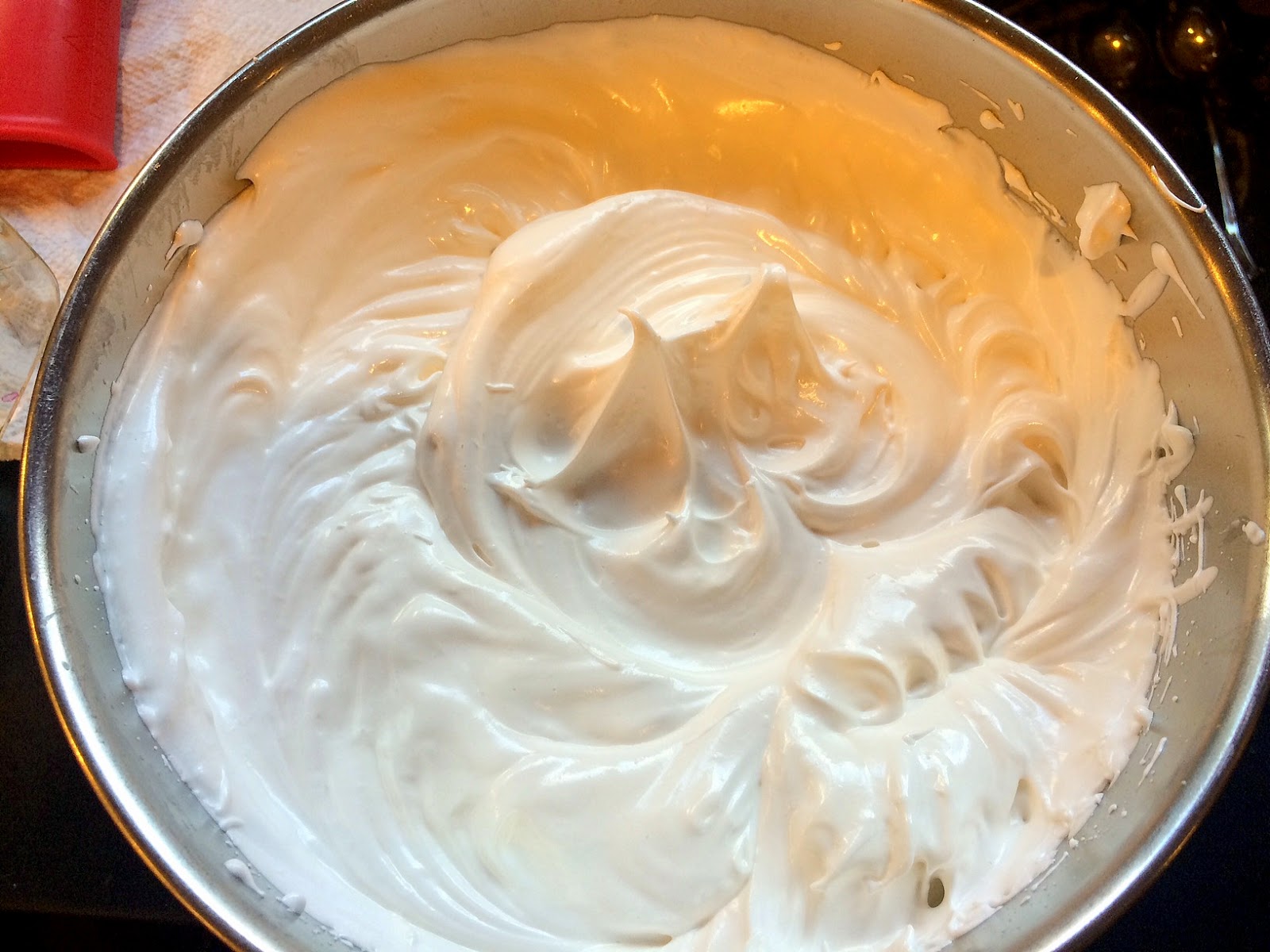 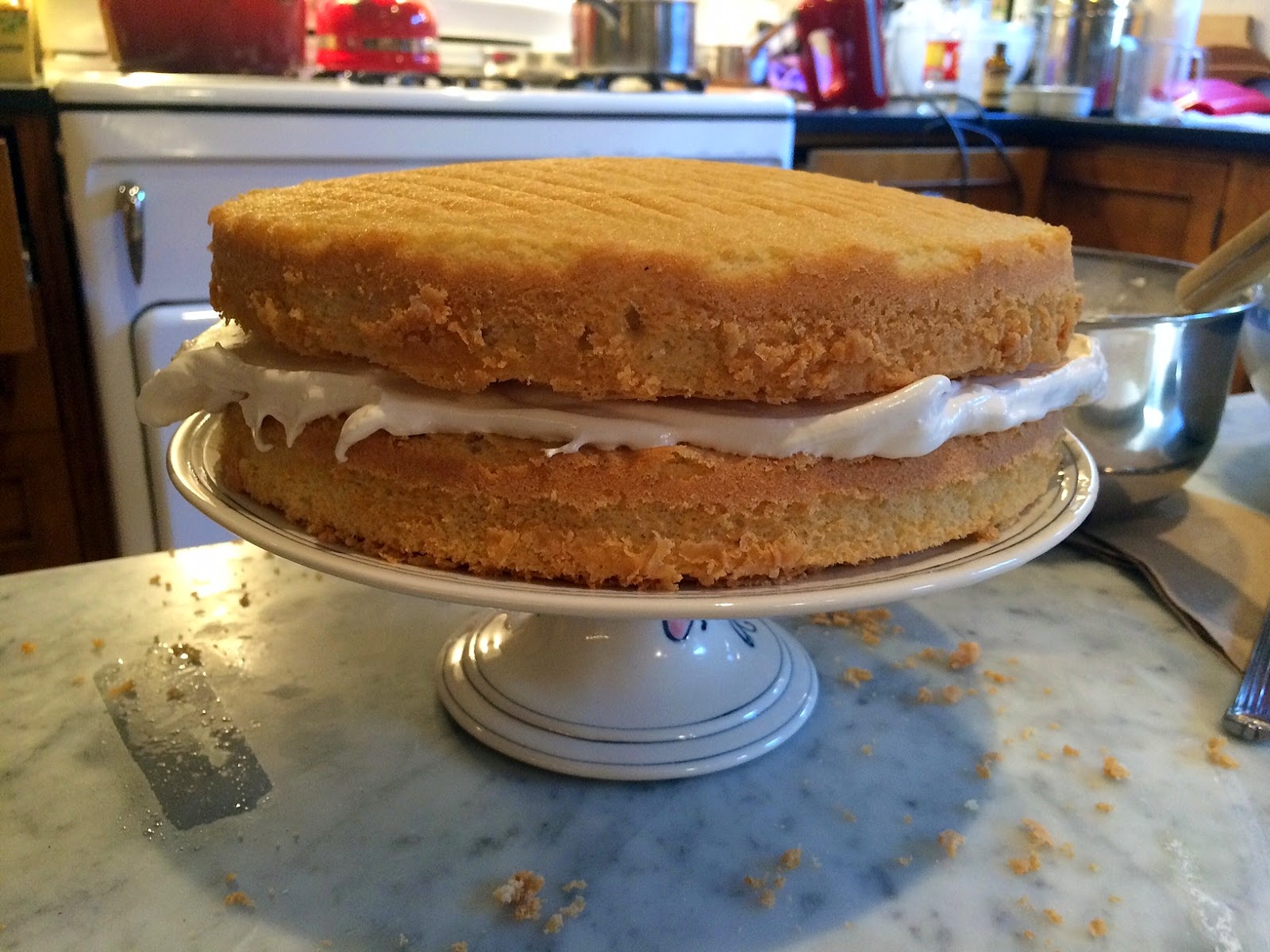 Production notes: I followed the recipe exactly, adding in the lemon extract and vanilla at the end. I also didn't beat as vigorously as instructed because overbeating can result in a tough cake. Be sure the butter is at room temperature. I baked it at 350 F for 25 minutes. 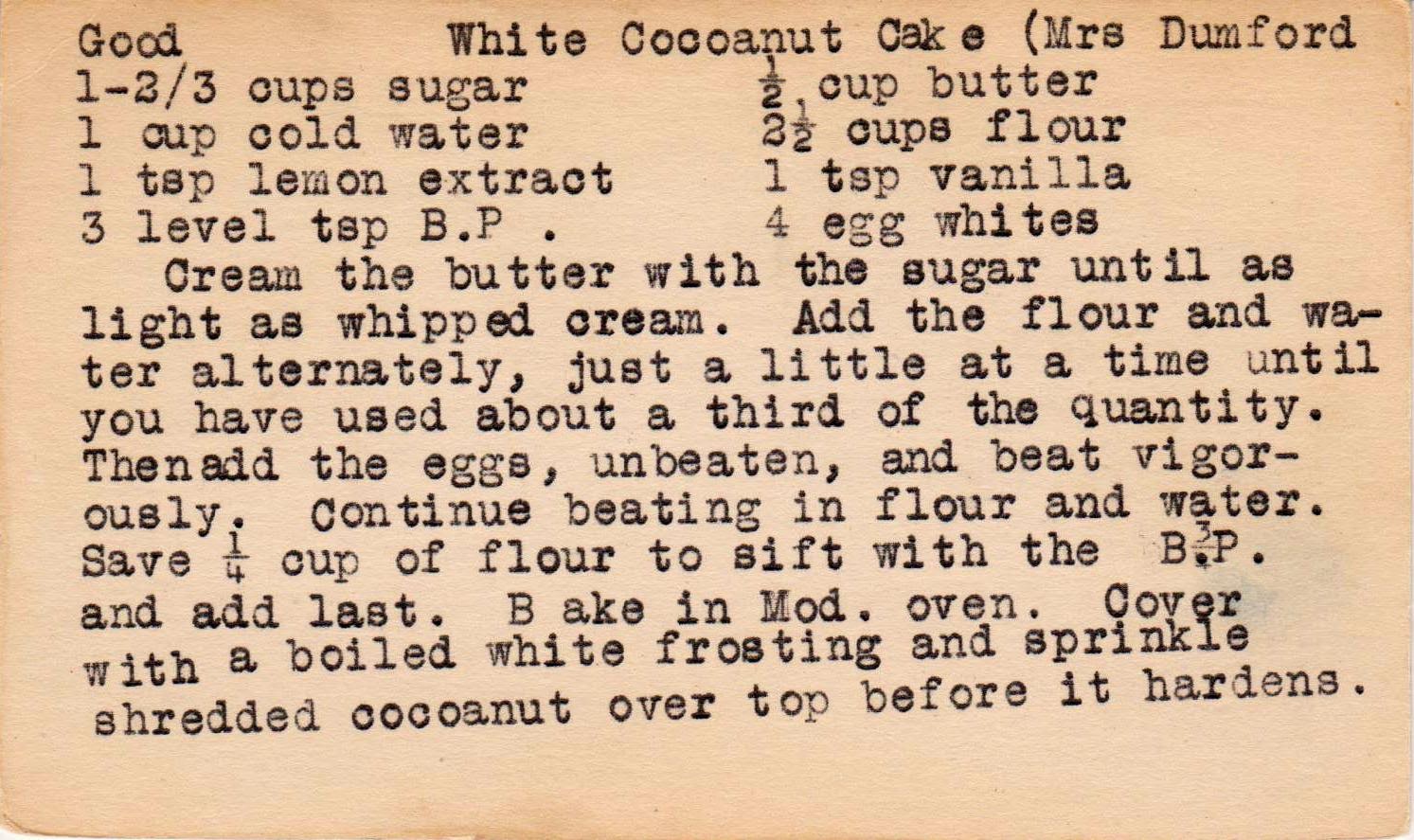 I followed this recipe exactly.  After the vanilla is added, beat for another minute or so.  I also don't have a double boiler, so I fashioned one by placing a bowl over a saucepan of  boiling water. This would make enough for a three-layer cake. 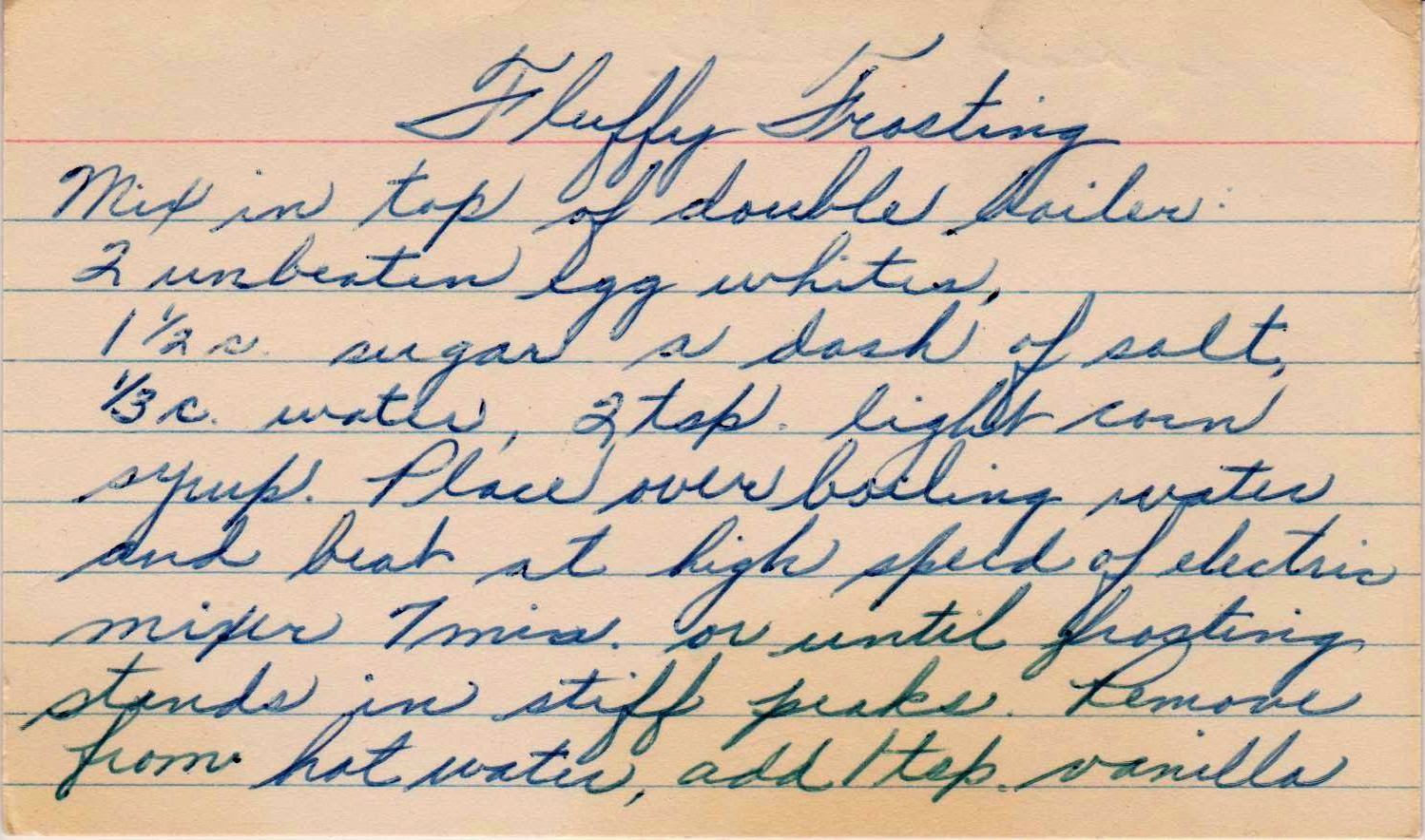 Birthday celebration, and the birthday boy. 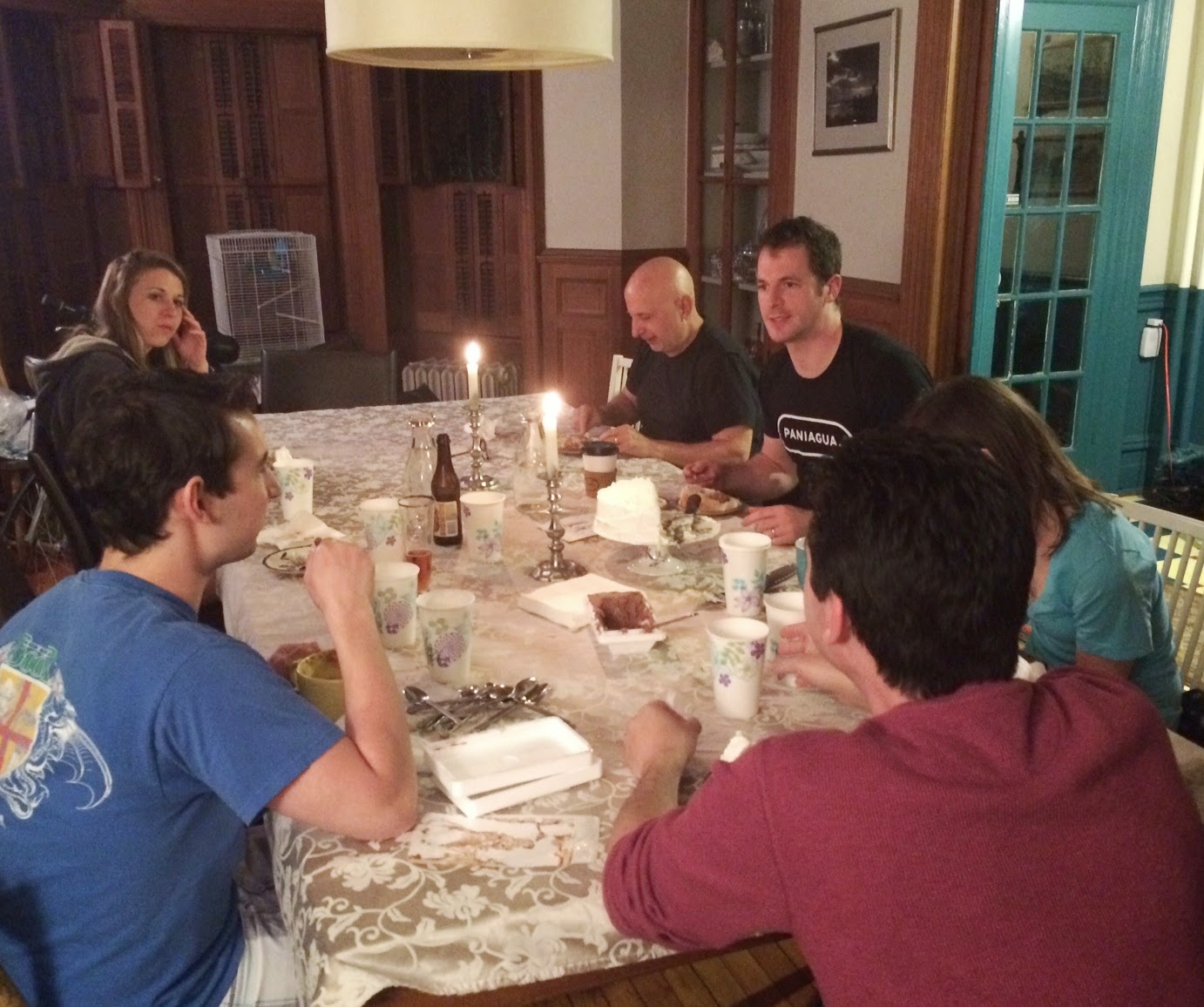 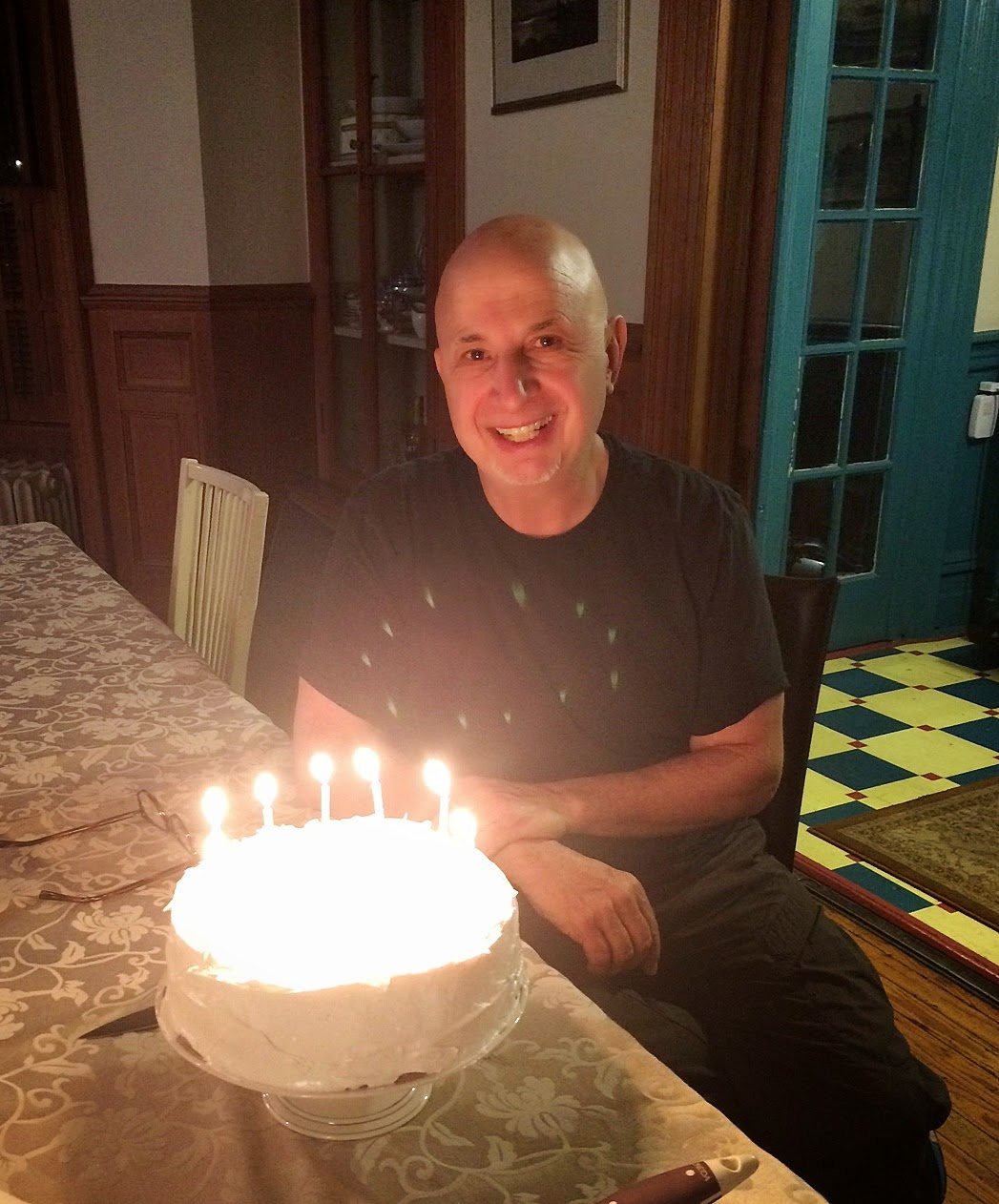