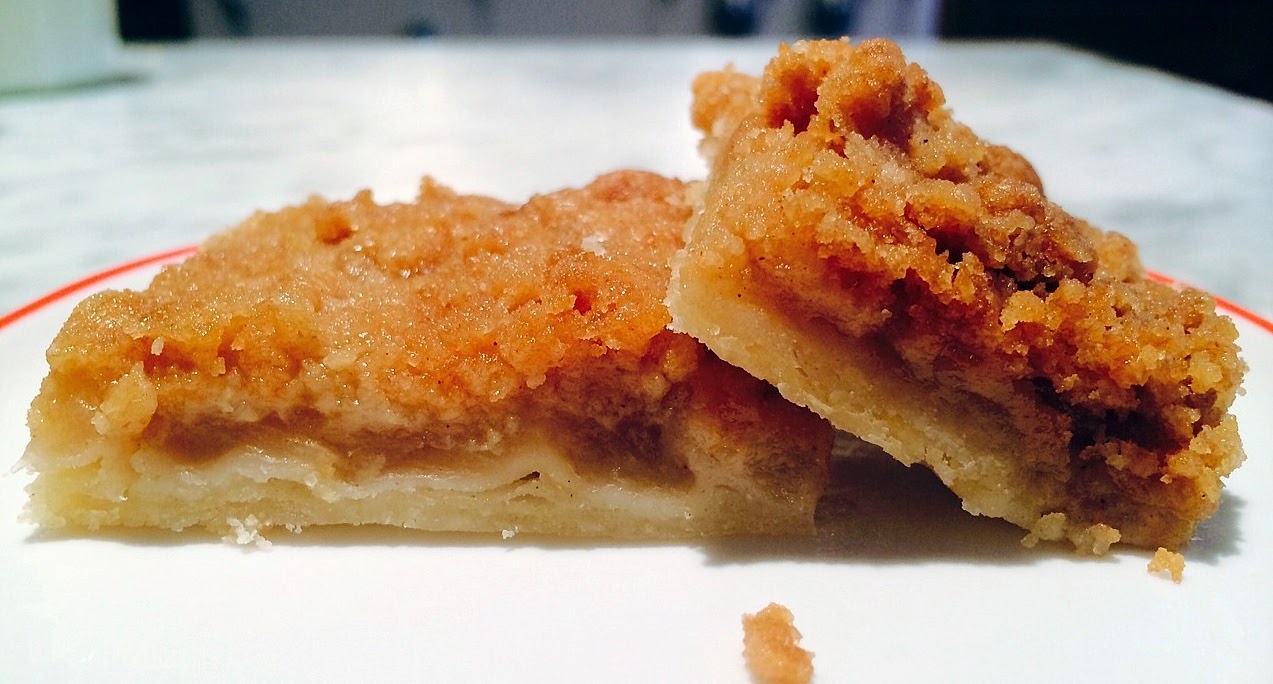 I once heard a very wise nurse, during a lecture, say: Success is not a pie with just eight slices. That single sentence has become my mantra, recited during difficult times. But in real life, pie does indeed have just eight slices, so how to feed a crowd with pie?  It's simple -- just make this apple pie dessert, which is apple pie transformed into a delicious bar cookie.

Apple Pie Dessert is an unusual (as in I'd never seen anything like this) vintage recipe. It is a bit more difficult than pie, but can feed way more than eight people, and also satisfy the guest who just wants a "tiny piece"with disturbing the symmetry of pie.

When baked and cut, these resemble generic bar cookies, and when served as part of a dessert table (as these were last night*) aren't likely to attract a lot of attention. They need a bit of marketing, like a sign that says: Apple Pie Dessert.

These three-layer bars are very sweet, taste like pie and are really good.

Start by making a two-crust pie. My go-to recipe is at the end of this post. Roll out the dough and simply patch it together to make a rectangle. 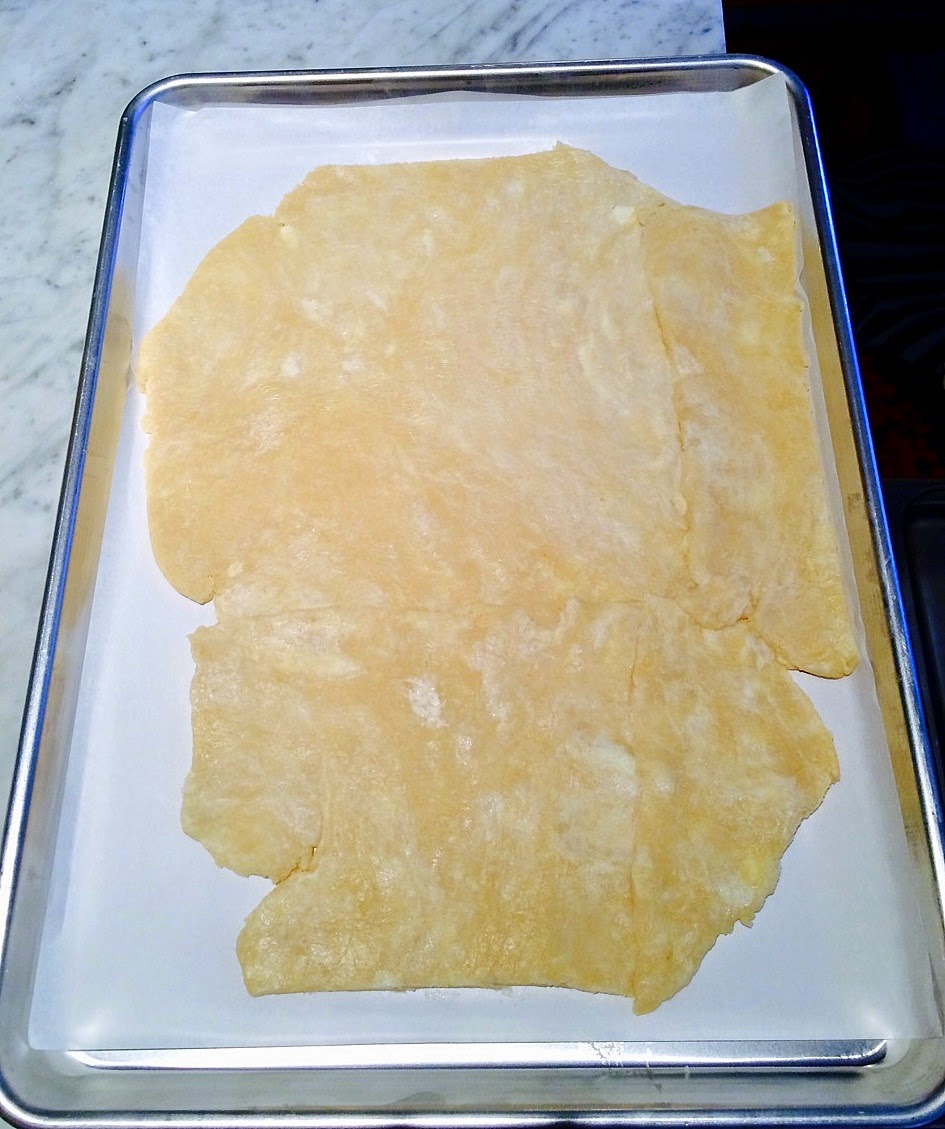 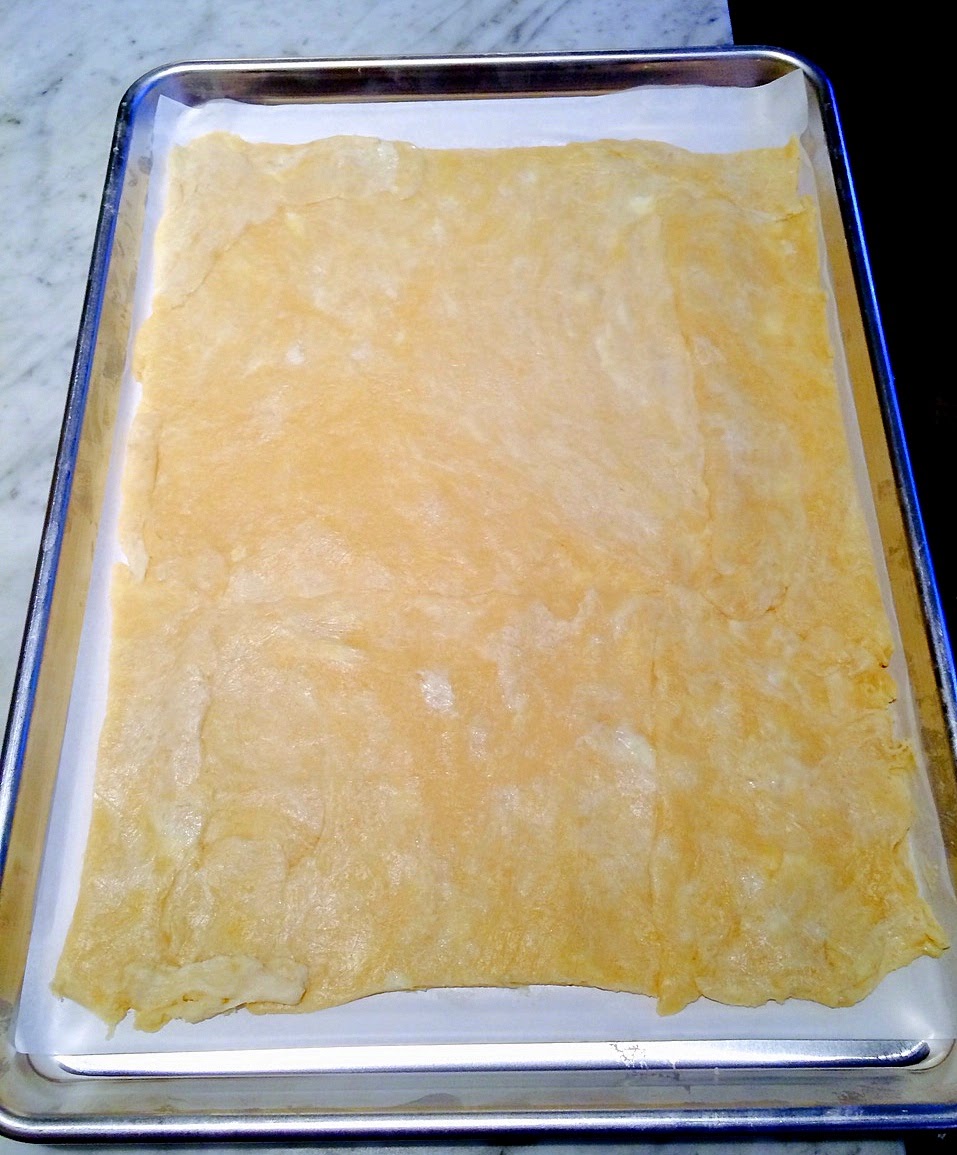 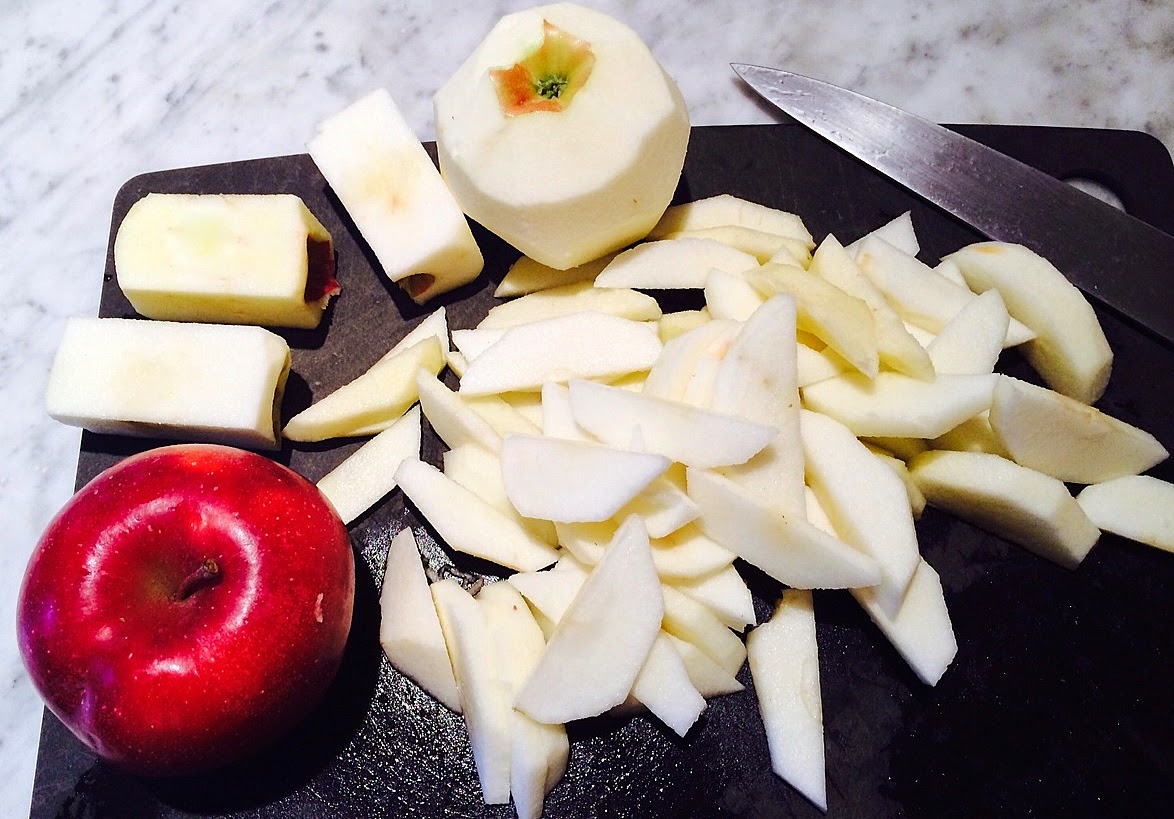 Arrange the slices atop the unbaked pie crust. 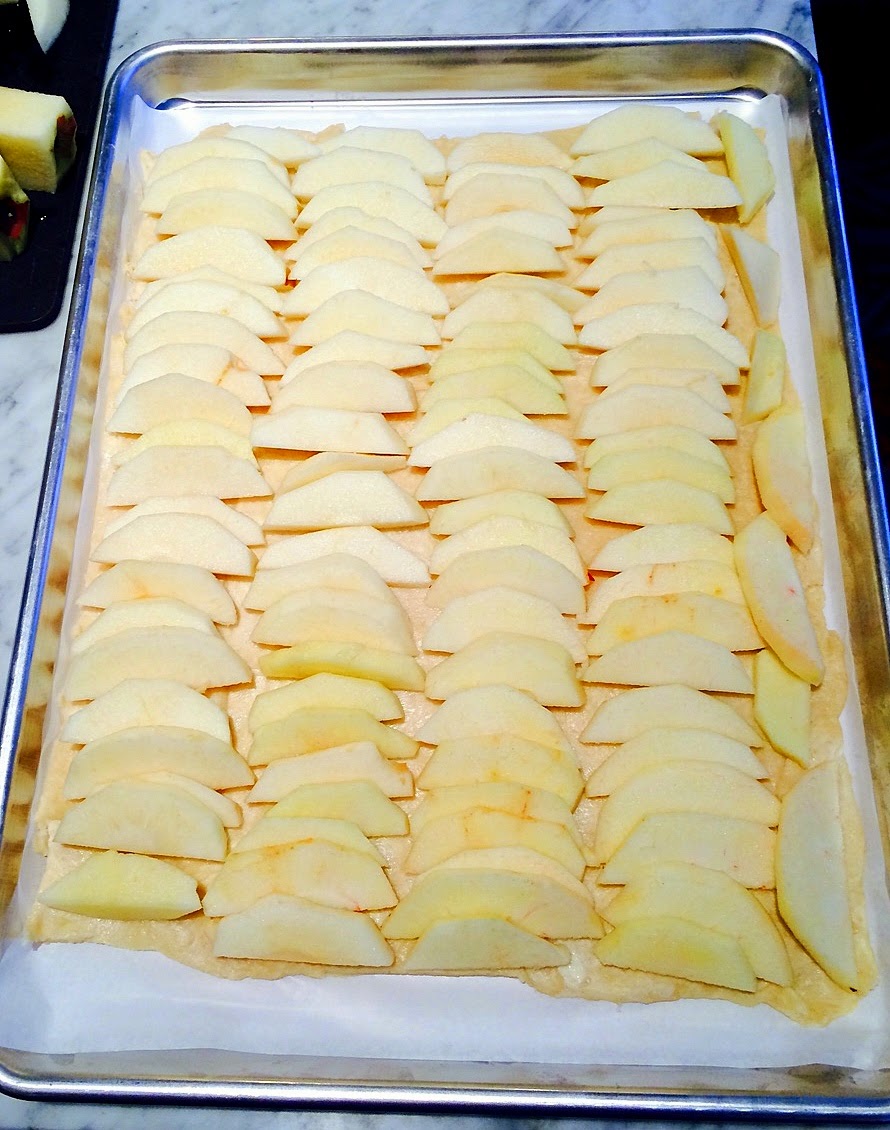 Make the topping -- a mixture of flour, sugar and cinnamon. 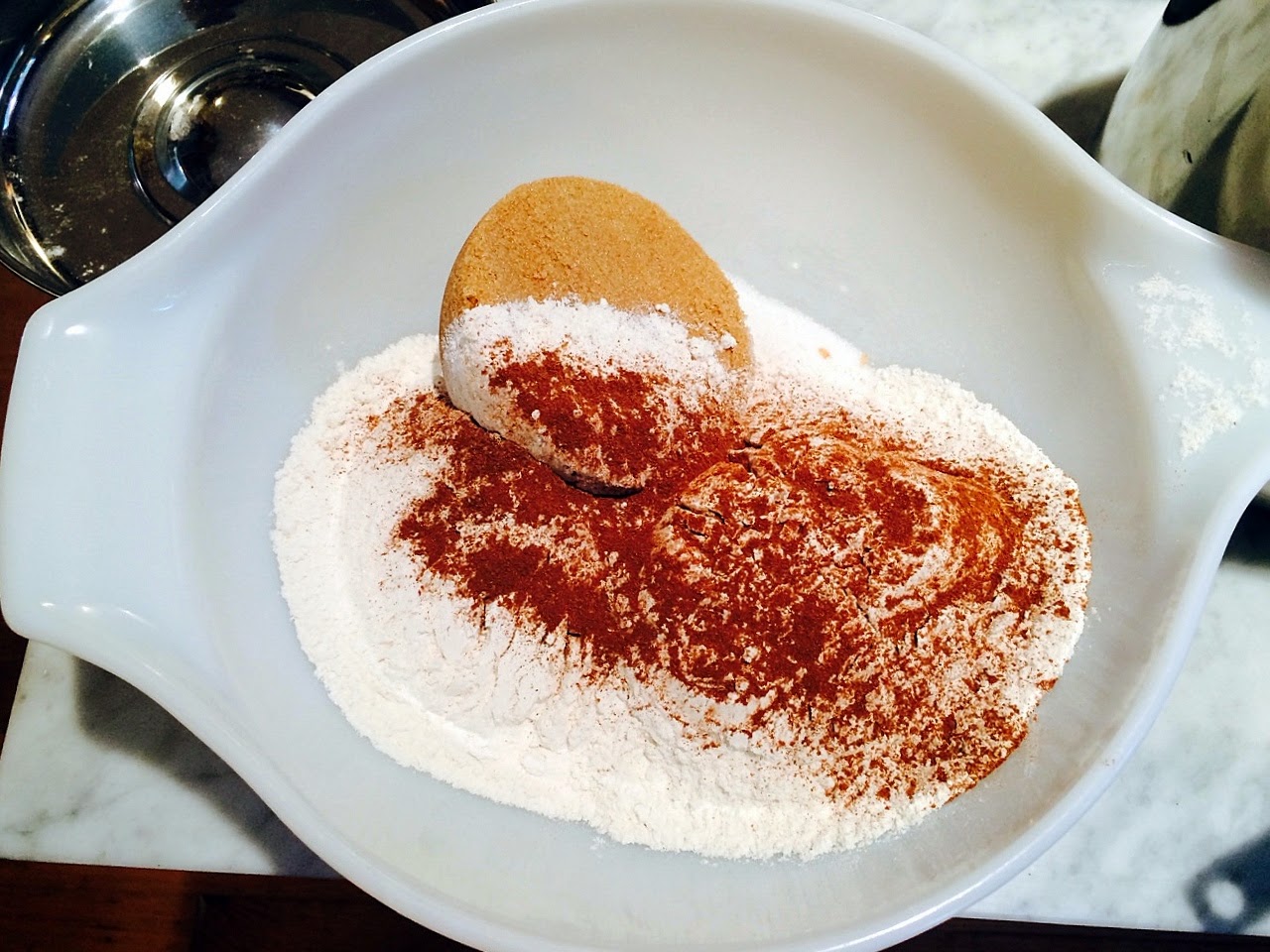 The recipe says to pour this powder-like substance atop the apples. I wasn't sure it would work, so mixed some butter in half of the topping. 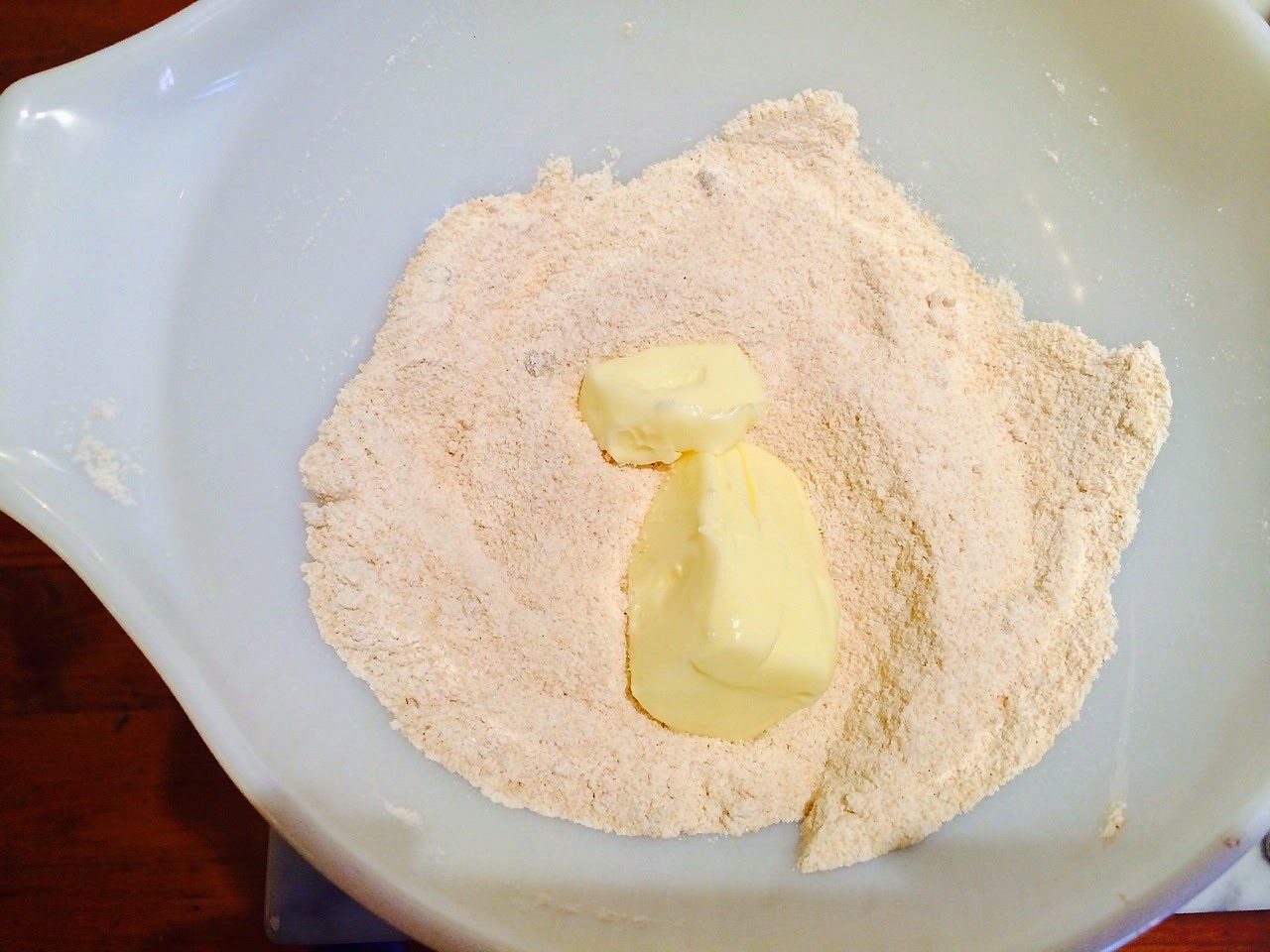 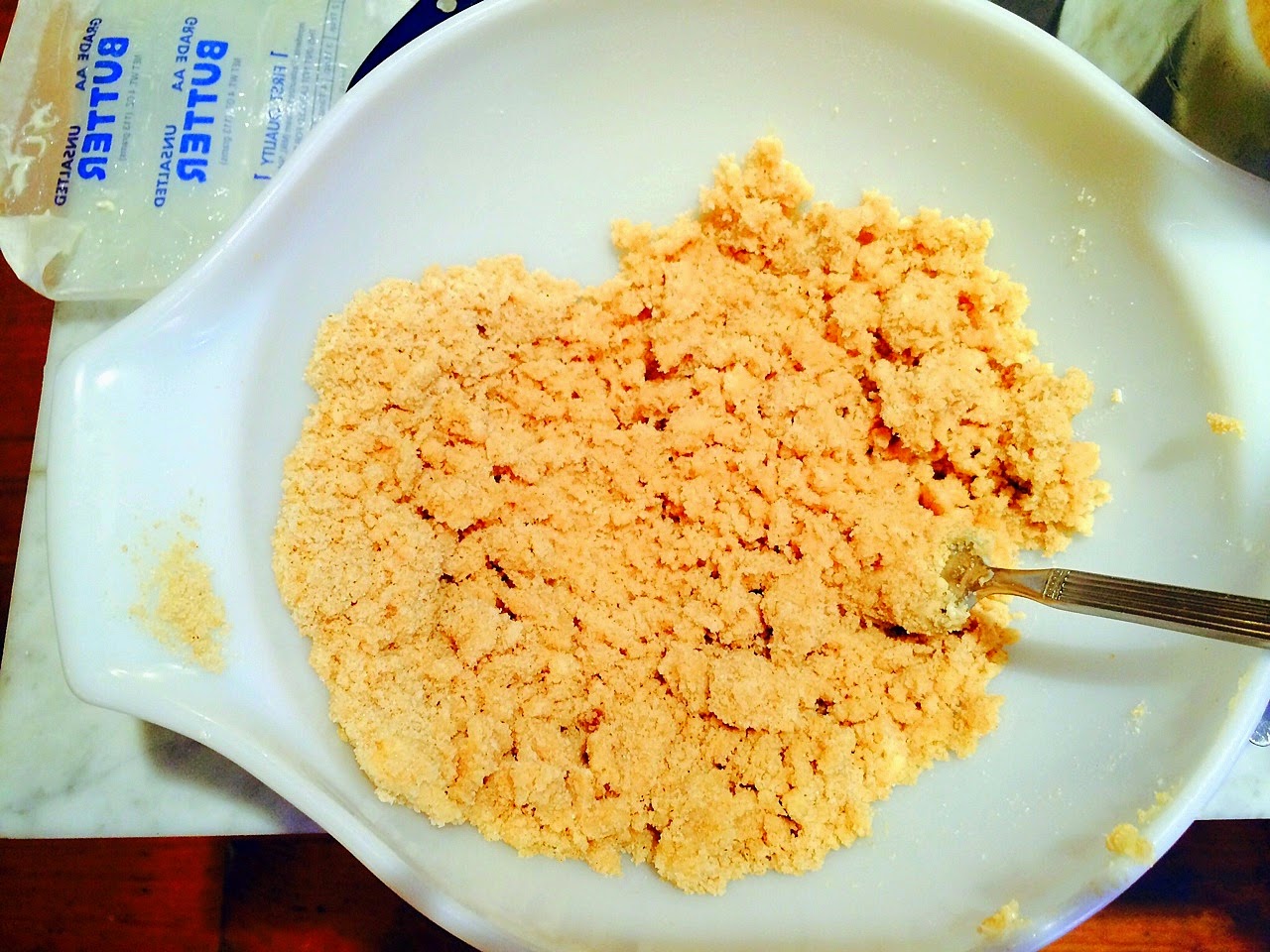 For half of the pan, I placed the butter mixture atop the apples. For the other half, I followed the instructions and dotted the flour mixture with butter, and lots of it. 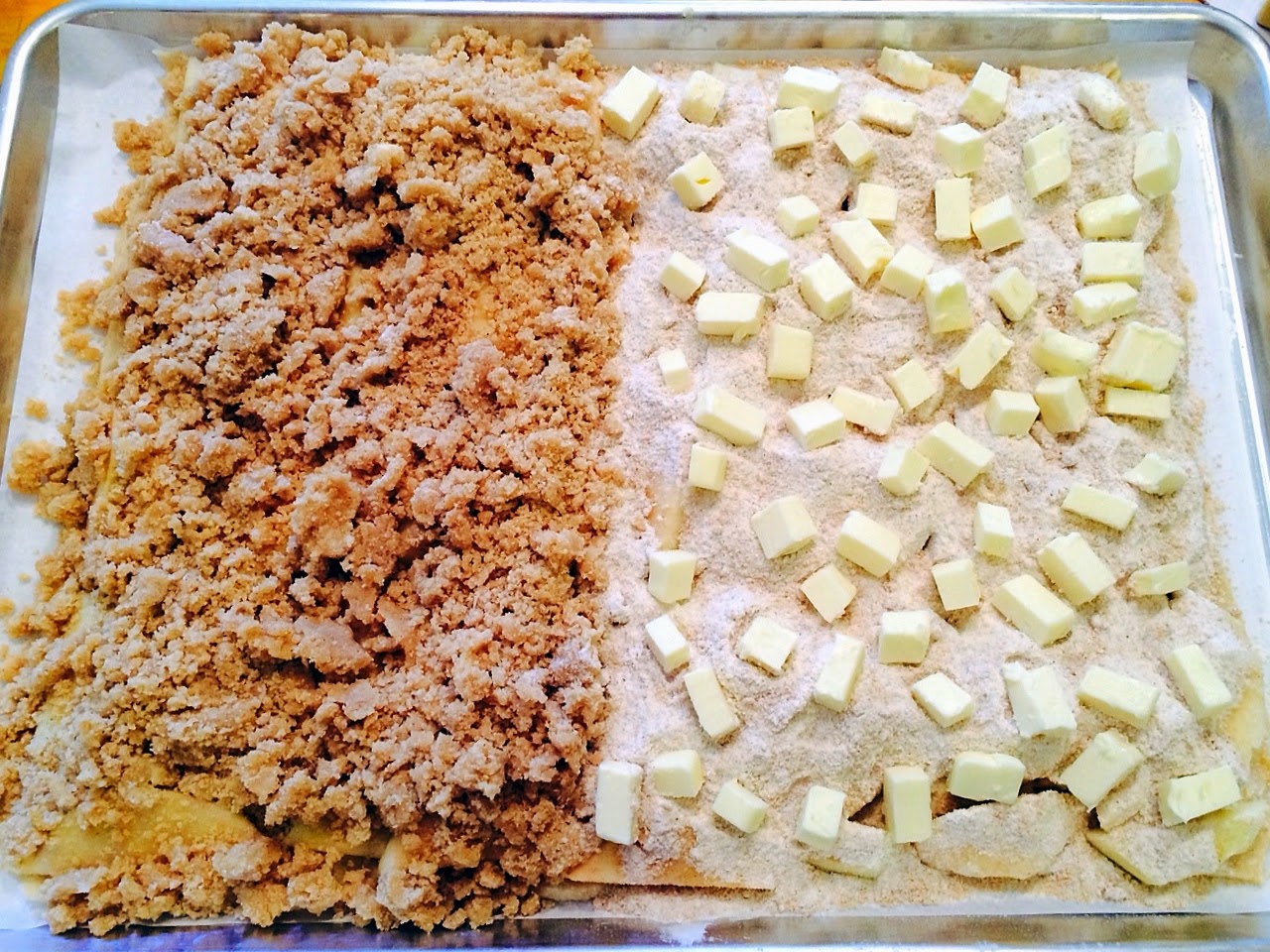 When finished, both sides worked. The side with the butter-infused mixture had a bit more texture, but they were almost indistinguishable when cut. The picture at the top of this post has one of each kind. 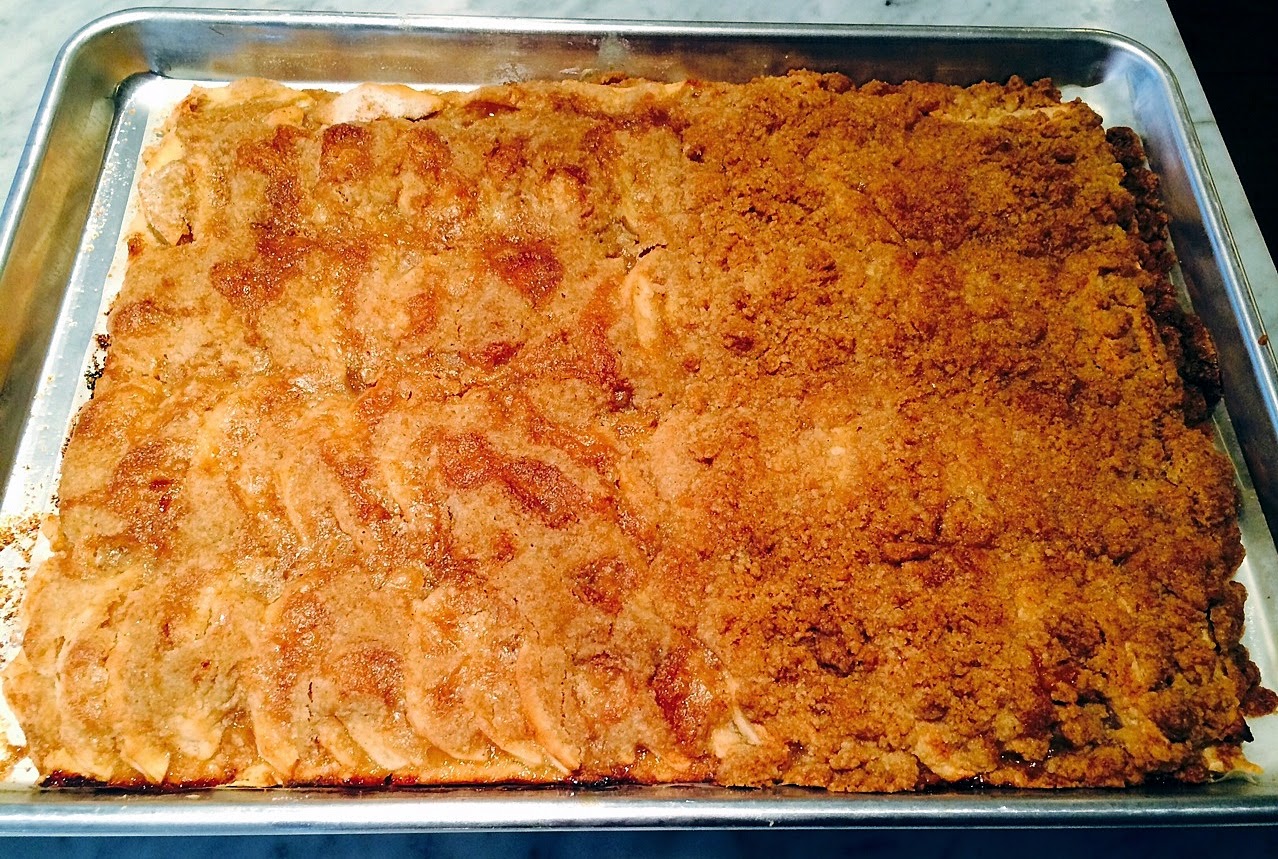 Production notes: I followed the recipe exactly (except for the topping variation, above.) I baked it until it was done -- sorry to say I didn't time it (too much going on), but I'd guess it was about 30 to 40 minutes at 350 F. 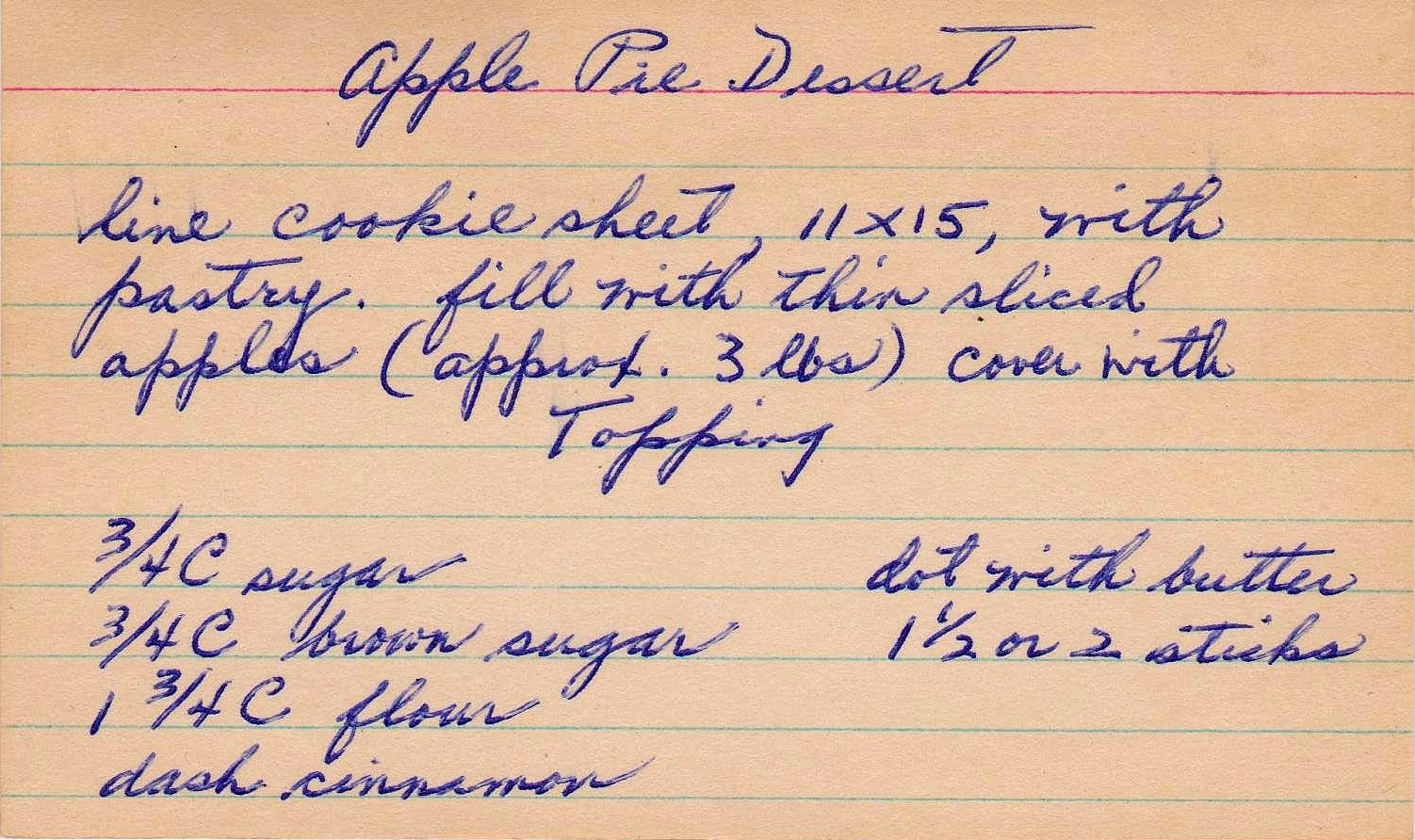 For the pie crust, I used my version of the tried and true recipe published in the original c. 1980 Silver Palate Cookbook, which is pretty vintage itself at this point. This makes a double crust, the perfect amount for this recipe.
2 1/2 c. all-purpose flour
1 stick of cold butter, cut into small pieces
6 T. cold Crisco, cut into pieces
2 t. sugar
1 t. salt
3 - 6 T. cold water
Place dry ingredients in a food processor and whirl to blend.  Add butter and Crisco and process until it resembles cornmeal. Transfer to a round bowl, and add the water, a couple of tablespoons at a time.  Blend with a fork.  When it holds together, transfer to a lightly floured surface and form a large ball.  Divide in half and either roll out between two sheets of plastic wrap, or refrigerate until it's a bit firmer and then roll out.

*We were lucky enough to be invited to Smokin' Joe's backyard BBQ last night, where the stars of the night were the hosts Joe (pictured below) and Lilly, and the roasted pig, pork, beef and lamb they served, and the lovely guests who all enjoyed the feast. 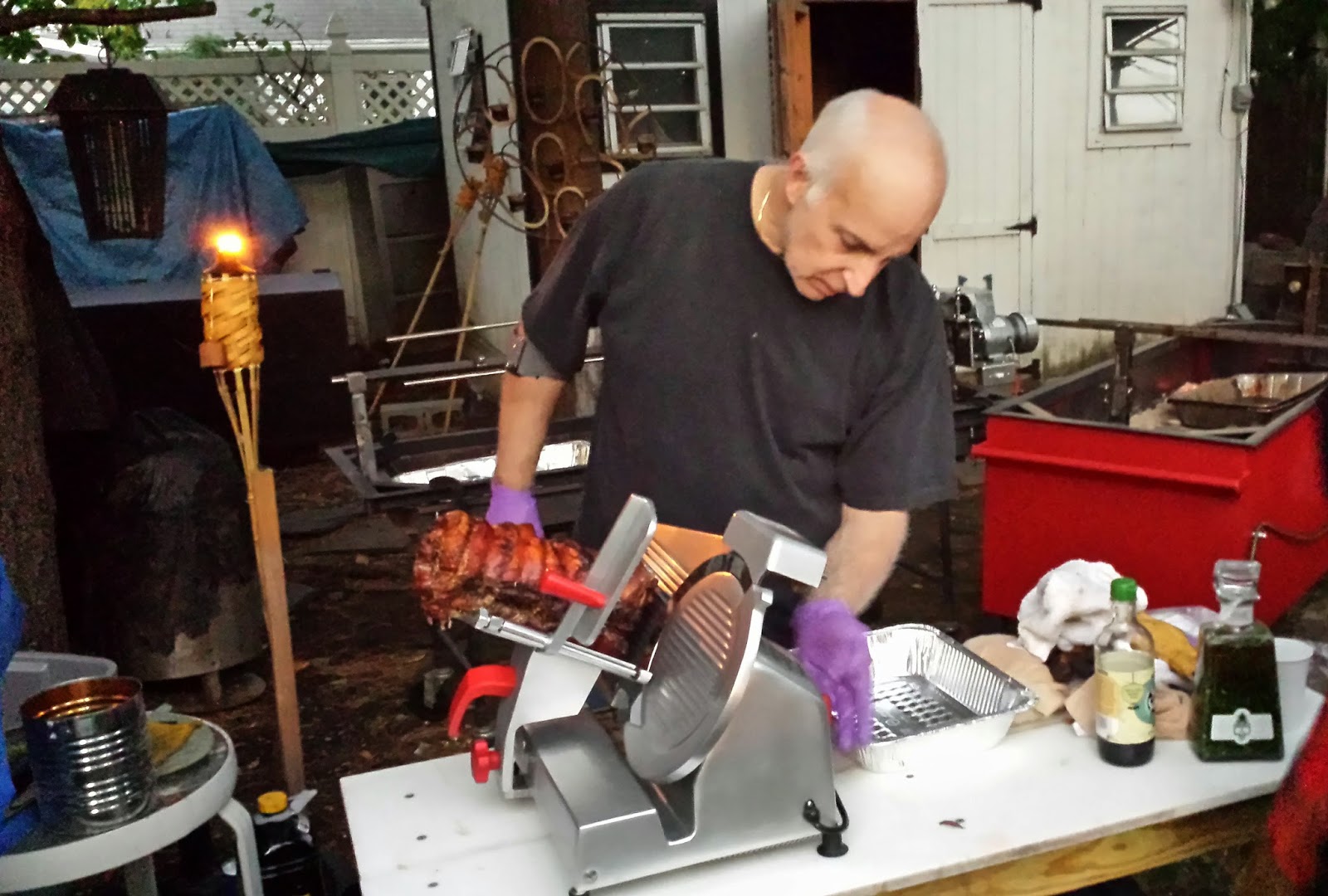 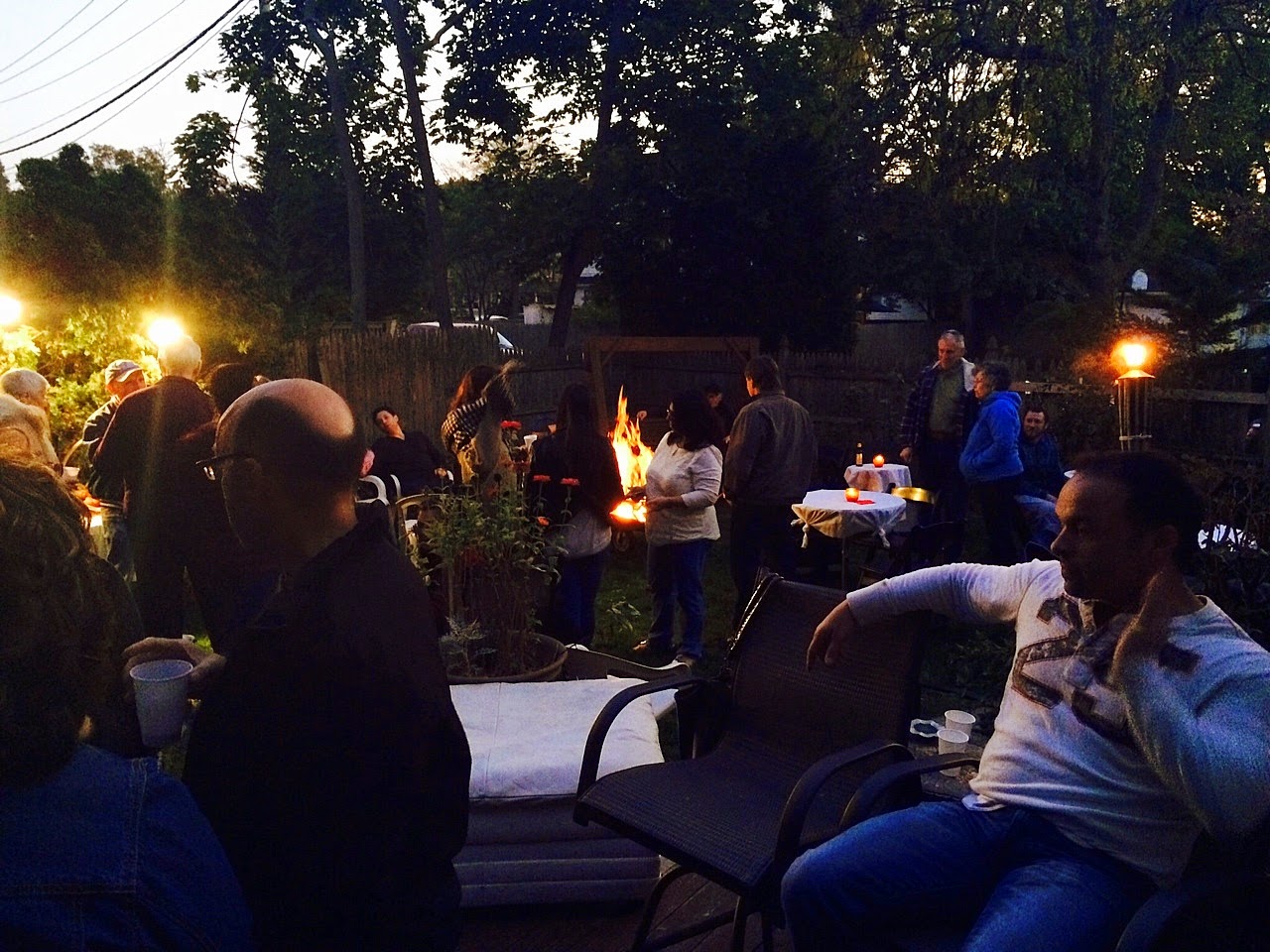 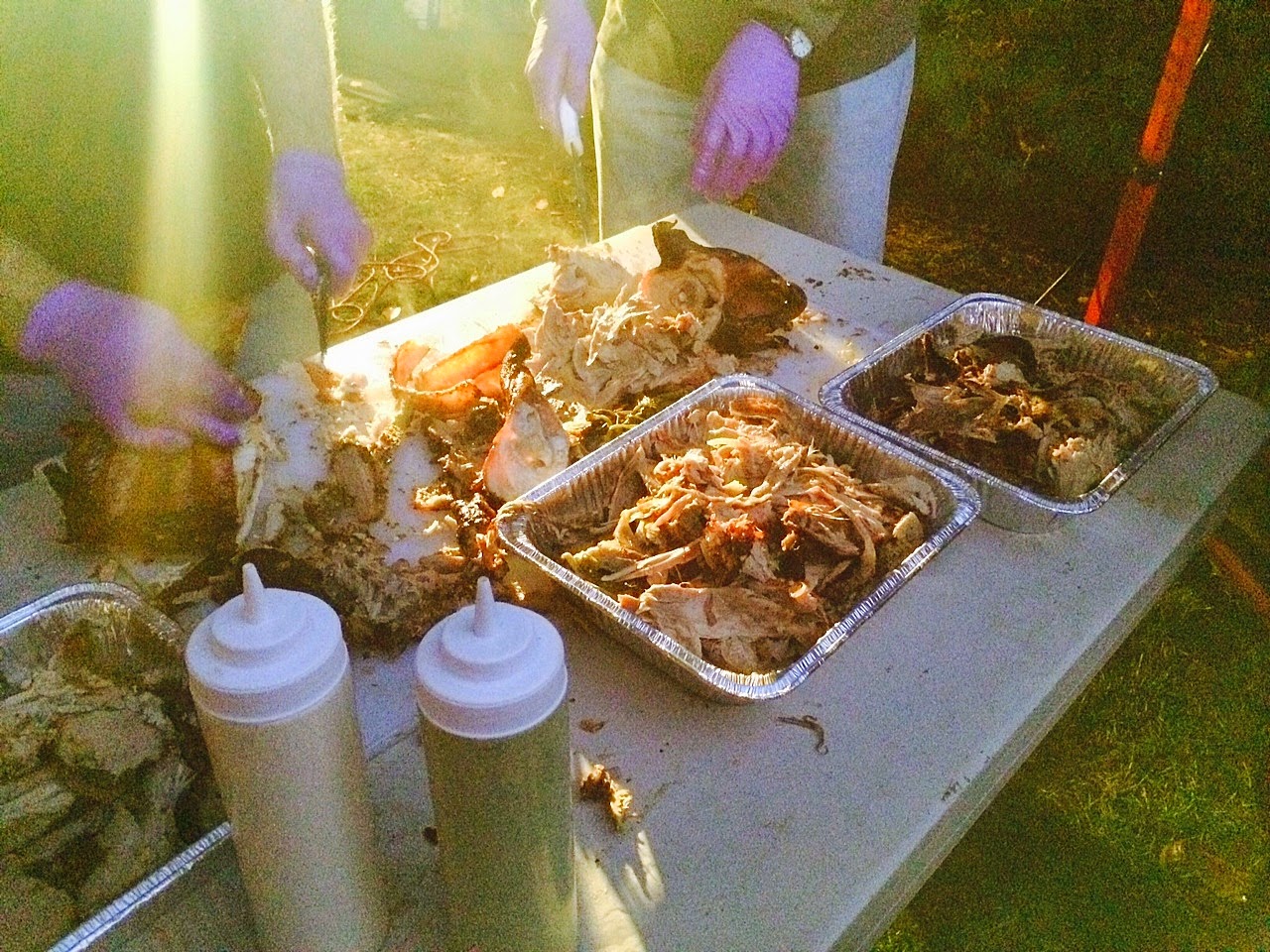 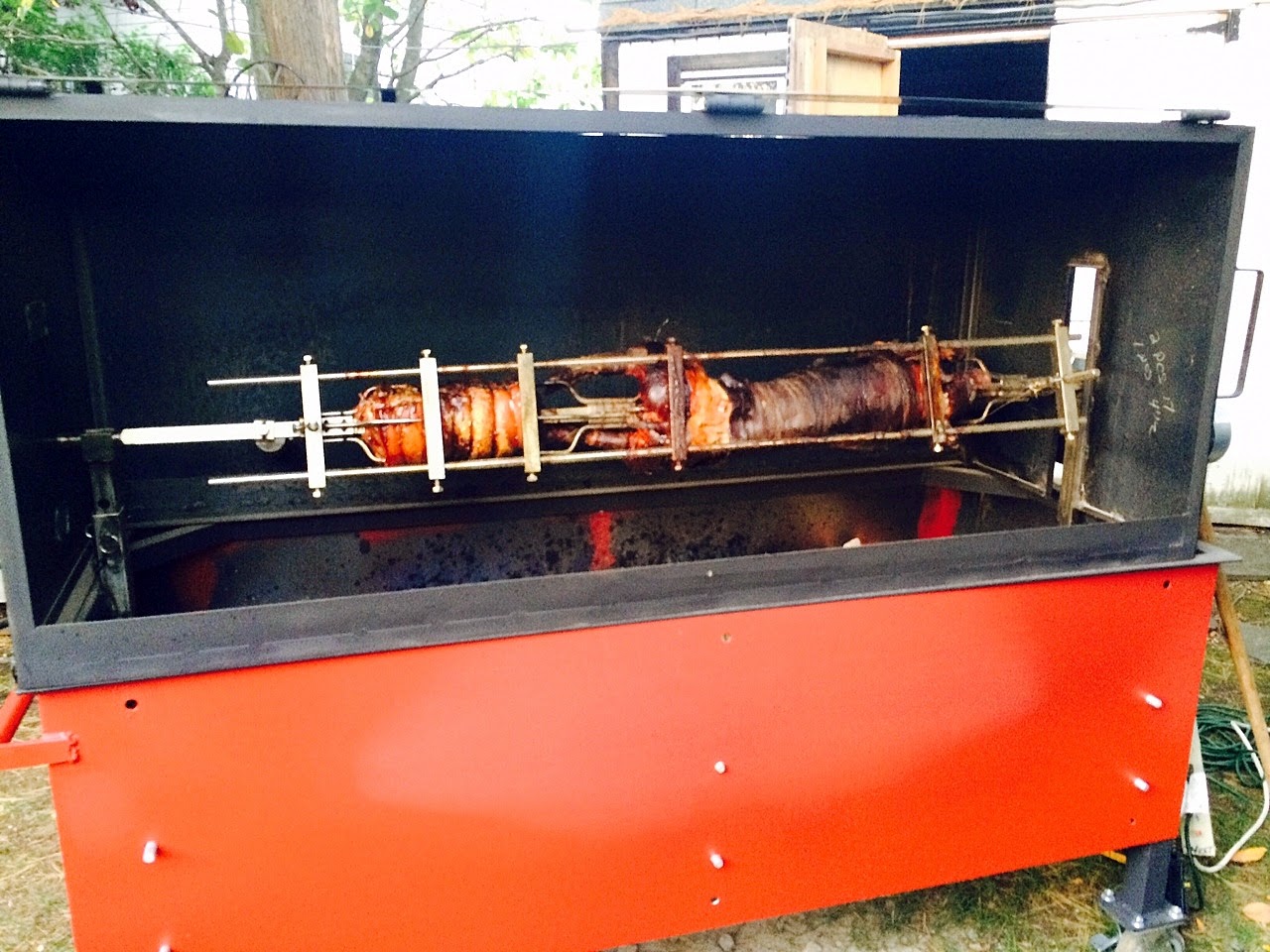