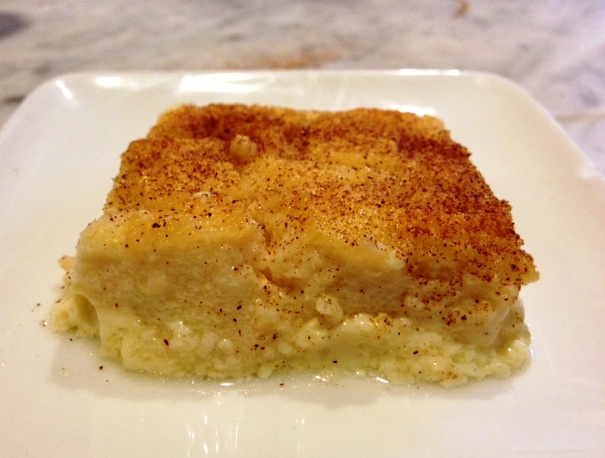 I'm back, after far too long away from my oven.  One reason excuse is that the DH and I spent a week in Paris, swapping apartments with a French family we "met" on craigslist.org.  We'd done this before and, like the last time, I returned to the surprising food remnants of the Parisians' stay in New York -- supermarket white bread and other items that I would never purchase.  (The first family we swapped with even left some Kraft American cheese!!)  We couldn't believe that while we were indulging in the most delicious cheese and bread ever, the French families had "enjoyed"  what I consider the lowest common denominator of American food. 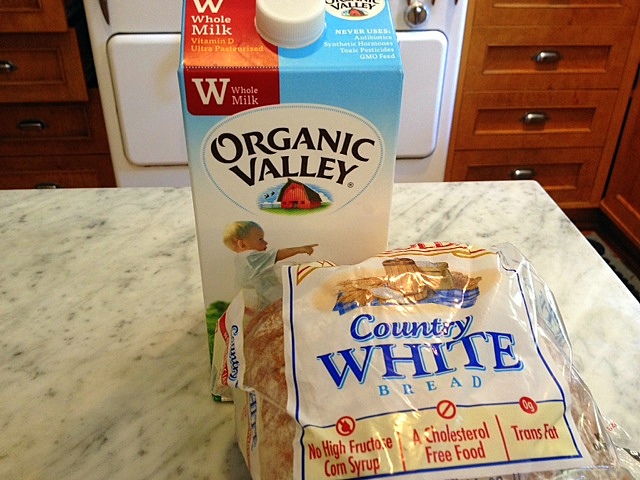 And so, faced with a loaf of white bread and whole milk (which I never use, preferring to chew my calories), I made the only prudent decision -- to transform the leftovers into a delicious bread pudding.  This is the bread pudding of my dreams, rich and custard-y.  In fact, it was more liked baked custard than what we know today as bread pudding.

The recipe instructs "crumbling" the bread; most bread pudding recipes in the early- to-mid 20th century were were simply vehicles to "use up" stale bread.  But the super-preserved supermarket bread in my refrigerator was still fresh, so I cubed it.  It took about 3.5 slices to fill the three-cup measure. 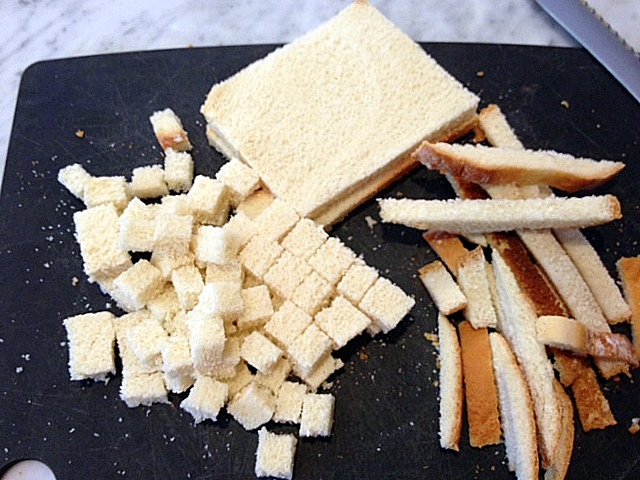 The bread cubes and sugar are placed in a bowl and covered with the hot milk for ten minutes. 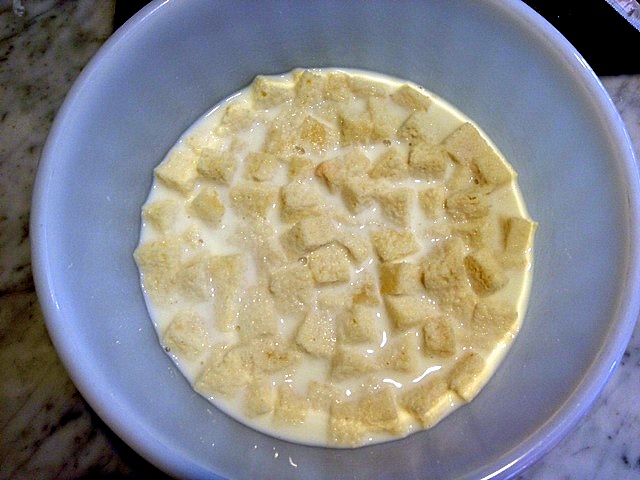 Two very well beaten eggs (below) are added to the mixture, along with salt, vanilla, lemon extract and melted butter. 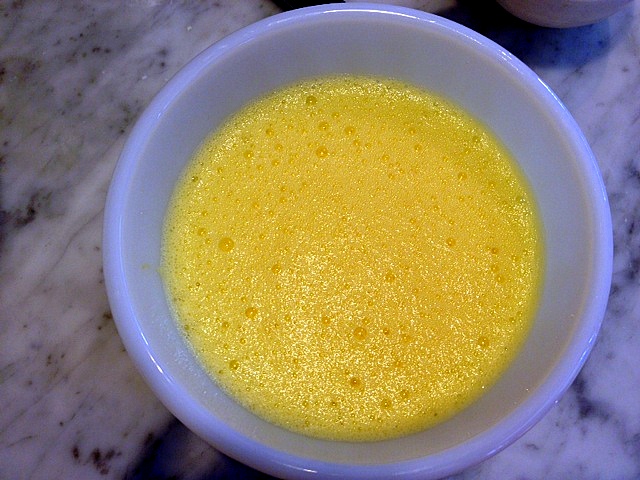 The batter is very liquid-y.   Pour into an 8 x 8 (or similar size pan).  I lined it with aluminum foil, mostly to save clean-up time. 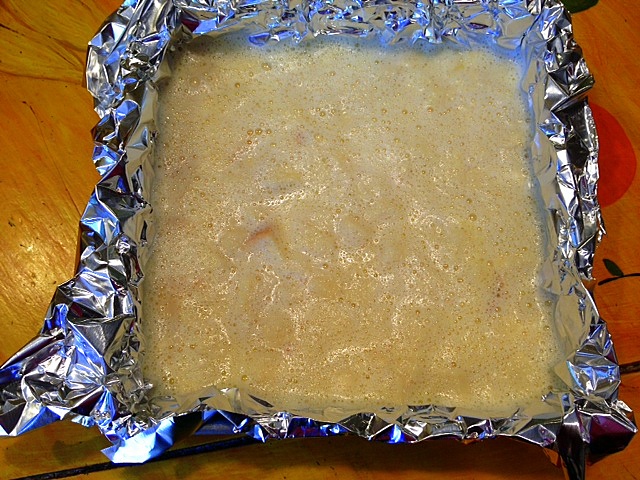 The bread pudding pan is then placed inside a larger one (below).  Add hot water to the larger pan (most easily accomplished after it is on the oven rack, to avoid spilling).  This water bath helps the custard cook at a more constant temperature, insuring a better result. 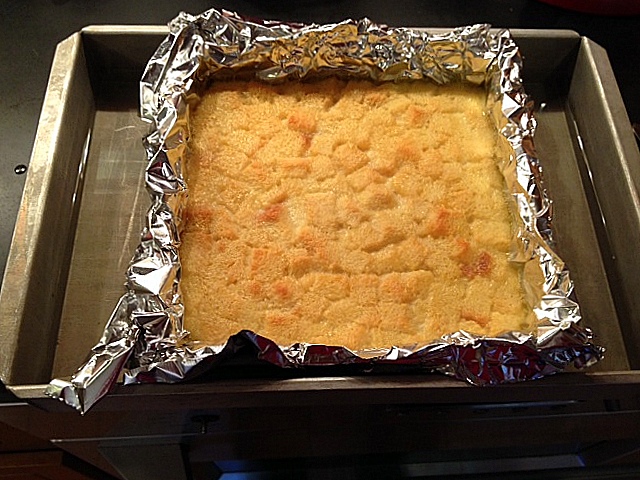 My custard did not come out perfectly, despite the water bath.  (It is a bit weepy, which may be hard to see in the photograph.) I got "involved" with Facebook while it was in the oven and let it bake a bit too long.  Still, it was delicious, even if the consistency was not absolutely perfect. 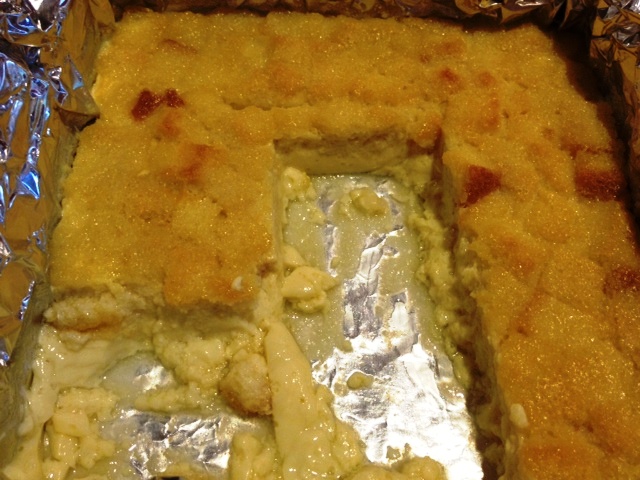 I had to let this bake for over one hour, not the 45 minutes called for, as it was still quite loose at that point.  The custard should jiggle a bit, but not be too firm. It will continue to bake as it cools in the hot liquid.  Remove from the pan, plate and add a sprinkling of cinnamon on top for both appearance and flavor.  And then, enjoy! 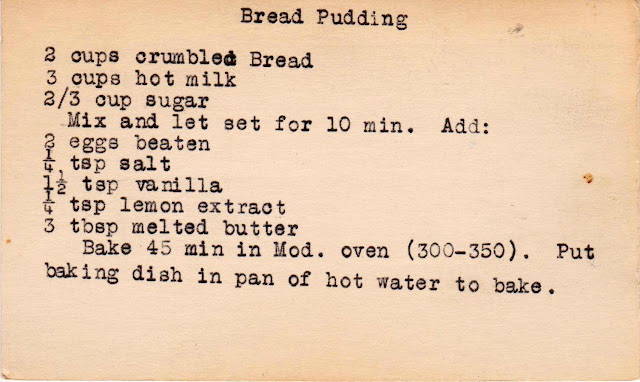