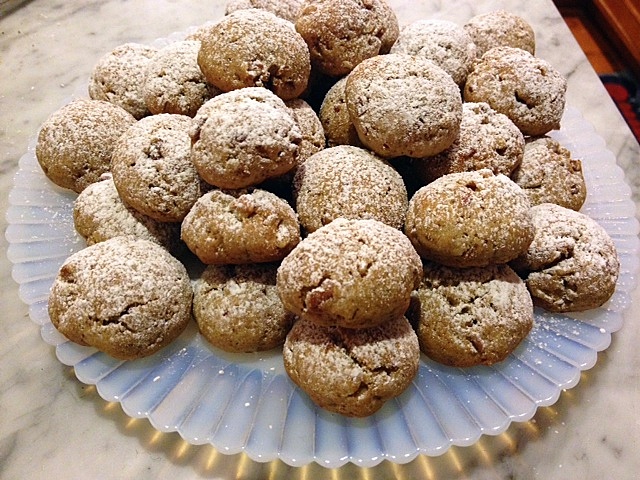 I was intrigued by this vintage recipe card because of its color (pink), the handwriting (penned by a teenager, most likely), and the odd name of the baked good (peppernuts).  So, last week I set out to make these.  Little did I know (until a Google search) that peppernuts are Christmas cookies.  Reminds me of the time I made hot cross buns in January.

Further, these aren't quite the exotic undiscovered treats I imagined.  The day I made them, the talented free-ranging writer Lenore Skenazy interviewed me for a column on how everyone seemed to be baking during Hurricane Sandy week.  When I told her I was making peppernuts she replied, oh, you mean pfeffernusse.  No, I insisted, these were different.  Until another Google search revealed she was right after all.  Peppernuts are a derivative of that traditional German cookie. (Also, my witty quotes ended up on the journalism cutting room floor, for they weren't in the story, which is here and really good.)

So operating under the belief that all cookies are always in season (similar to it's 5 p.m. somewhere when justifying an early cocktail),  let's get started.  This version of peppernuts does not have pepper, but they do have plenty of spice, below. 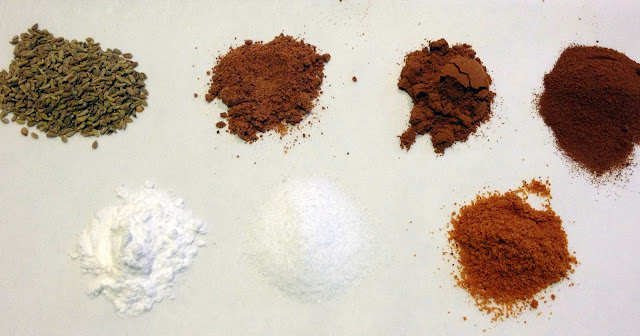 And nuts.  I used pecans, chopped fine in the food processor. 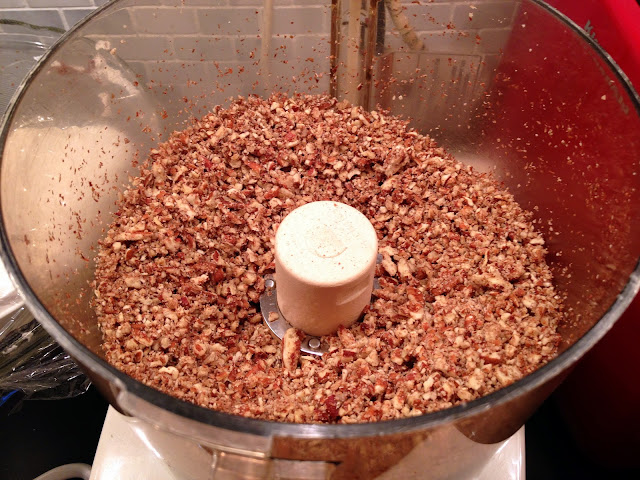 This is a very simple recipe to put together. 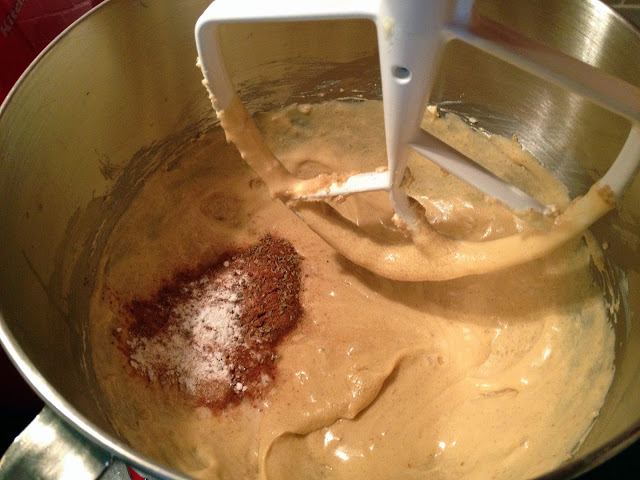 The dough is easy to work with and these cookies do not spread at all, so you can place them quite close together on the baking sheet (which I neglected to photograph).  As the fabulous food writer Amanda Hesser noted in The Essential New York Times Cookbook, (and quoting from memory here), in the baking kitchen, it's cookies that are the real time suck.  And the reason is all that in and out with tray after tray of cookies, but you won't run into that issue with these peppernuts, as you can really pack so many on a single baking sheet. 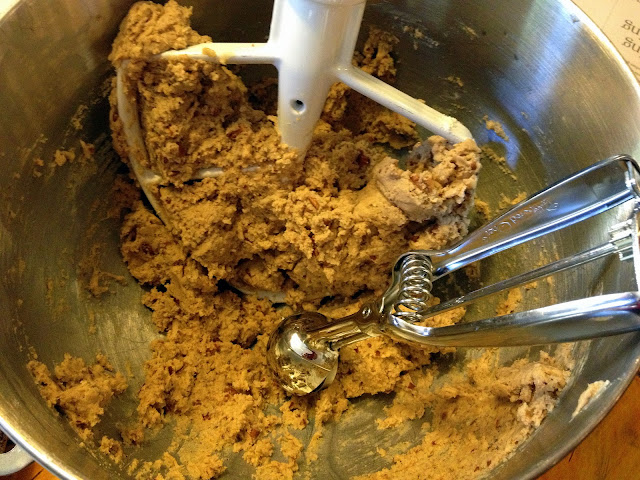 The recipe didn't call for a sprinkling of confectioner's sugar, but Google told me that pfeffernusse were usually dusted with it.  It adds a nice touch, especially for Christmas.  Again, too bad I made these in November. 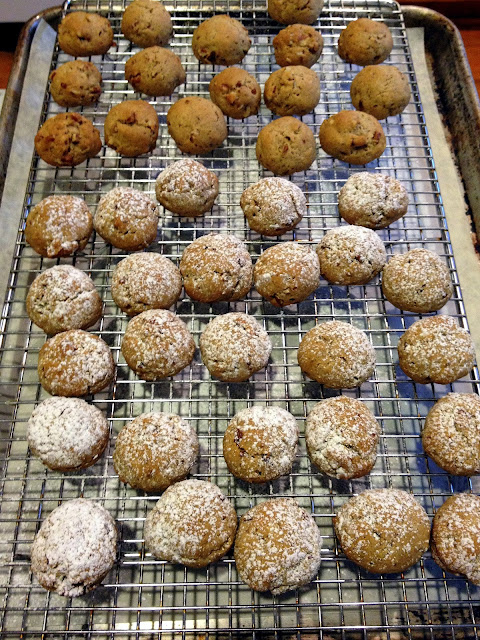 I baked a few of these cookies on Thursday and then stashed the dough in the fridge until Saturday.  In the middle of baking these off, our friends Allen and Racine stopped by en route from volunteering at a Hurricane Sandy relief station in Red Hook, Brooklyn, to their apartment in upper Manhattan. Perfect timing because I'm always looking for helpers to eat my baked goods and they were happy to comply. 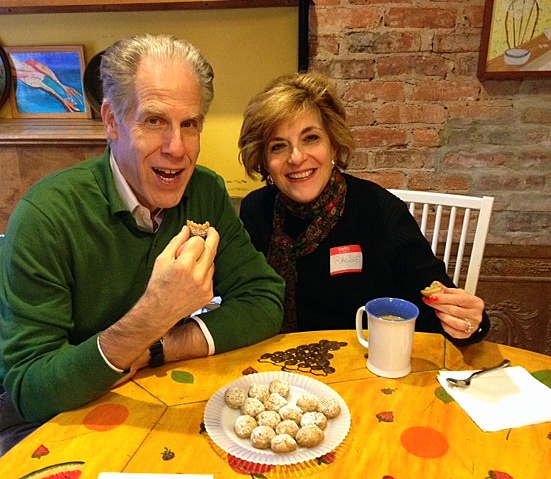 I just made half the recipe and I still had plenty of cookies. 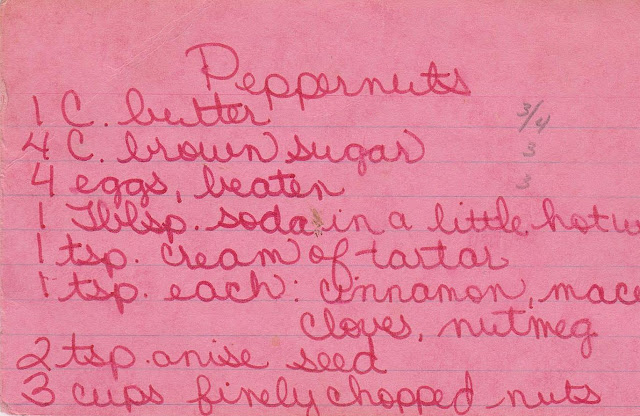 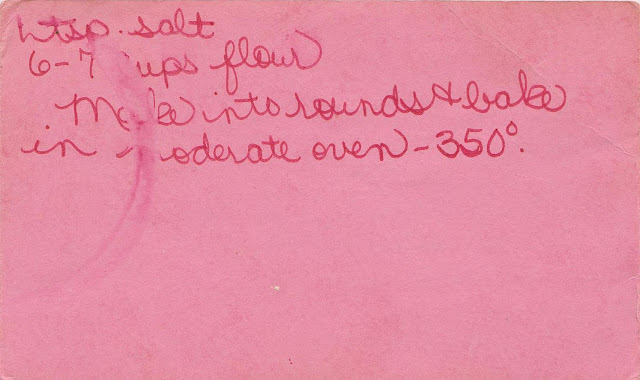