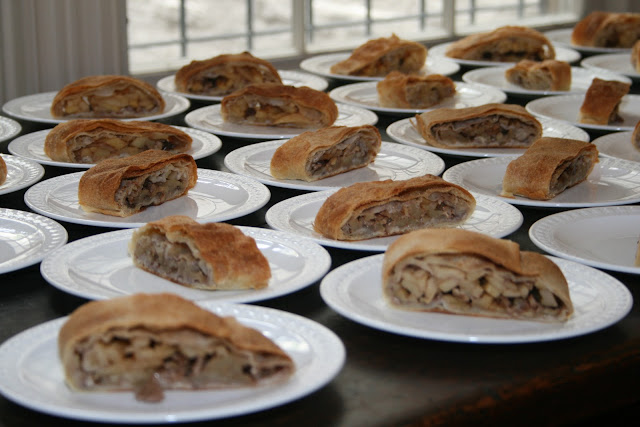 I promise a new baking post soon, maybe even tonight, but in the meantime, please enjoy this post from the DH, Paul LaRosa, about my baking-related experience this weekend!

FedEx delivers from Brooklyn to Manhattan — by air!

Normally, I have no complaints about FedEx. They do a pretty good job with most everything I send but last night I entered into the twilight zone of FedEx and the experience left me feeling like Tom Hanks in “Castaway” without the coconut to keep me company.
My wife is planning an event this week called “Real Housewives of Henry Street” and the idea is to show how immigrant housewives lived on the lower East Side back around 1905. In fact, the event costs $19.05 to get in. Clever, right?
Anyway, one of the treats she’s cooking up is apple strudel and she plans to make a lot of it. She needed a dough hook to knead the strudel dough so she wouldn’t be tied to the kitchen all day like, you know, a 1905 housewife.
Taking advantage of a modern convenience, she went online and ordered a dough hook to be delivered to her by FedEx to her work address which is on Henry Street in Manhattan. That’s where the fun began because there is also a Henry Street in Brooklyn and, for whatever reason, FedEx took it upon themselves to make “an address correction” and sent the dough hook to Brooklyn. My wife found out about the mistake yesterday and told FedEx they had made “an address in-correction” but it was too late. The hook was in Brooklyn, not far from Red Hook coincidentally.
After many phone calls and hours on the phone, she told FedEx she would pick up the package at the FedEx “world center” in Brooklyn. Some anonymous person on the phone agreed.  And that’s how we wound up on a very rainy Friday night on a long line at the FedEx “world center” in Brooklyn in a neighborhood where you definitely wanted to make sure your car doors were locked.
Finally, we got to the front of the line and, after much hemming and hawing, a FedEx gal produced a package. We signed, relieved and were about to walk out when I looked down at the name — it was not my wife’s.
“This is the wrong package,” I said.
The FedEx gal then disappeared into the back again and, when she reappeared, said another employee was doing her “a favor” by looking for our package. This is why I love when FedEx packages just appear and I am not forced to come face to face with this kind of customer service.
Another ten minutes went by and finally, a rain-soaked, frightened-looking FedEx clerk appeared. “Your package is here but I can’t give it to you,” he said. “It’s already been containerized and on the truck.”
Now mind you, we could see the trucks which were in the next room, a garage.
“What does containerized mean?” I asked.
“It’s in a container in the front of the truck and we can’t take it out without taking out a whole bunch of other packages. I’d get in trouble. We have to make the plane but it will be in Manhattan tomorrow.”
There were a couple of things about what he said that struck me. First that the package was going to the correct address, Henry Street in Manhattan but no one would be at my wife’s closed office the following day. She needed the dough hook to make a whole lot of strudel for the Sunday event. It was get it now or forget it.
The other thing that struck me was….THEY WERE PUTTING IT ON A PLANE TO GET TO MANHATTAN?????
“What do you mean, you’re putting it on a plane?” I asked. “There are no planes that go from Brooklyn to Manhattan!”
“Right,” he agreed, “we’re flying it from New York to Newark and then it will be delivered by truck to Manhattan.”
Even Mr. Rain-soaked man could see how insane this was. Remember, the package we desperately needed WAS IN THE NEXT ROOM AT THAT VERY MOMENT!
“I’m sorry, there’s nothing I can do,” he said. “That’s just how we do things.”
I flashed on Tom Hanks with his stopwatch in “Castaway” where he plays a FedEx employee and realized he had nothing on this guy.
What followed were a lot of irritated sentences that ended with the phrase “you realize how insane this is” but he wasn’t budging. Finally, my wife told him to send the package back from whence it came — if she didn’t get it immediately, she couldn’t use it. The irony is that she wound up making the strudel by hand with no help from a motorized dough hook — just like they did in 1905.
Posted by Susan at 12:17 PM