In Search of Panela: From Guatemala to the Lower East Side 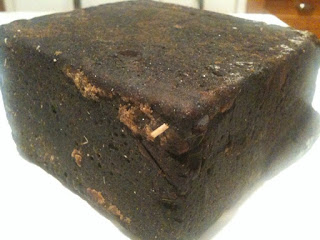 Last year, I accompanied DH to Guatemala where he attended a writing workshop led by two talented authors, Joyce Maynard  and Laura Lippman.  Although I didn't participate much in the workshop (instead spending my days practicing yoga and getting massages -- tough life, I know), I was a full participant in workshop meals. Each morning, a delicious breakfast was served al fresco on the garden terrace at Joyce's beautiful house on Lake Atitlan. 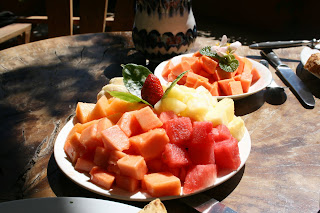 There was oatmeal and fresh fruit, tortillas and beans, and a special of the day, all presented buffet style.  One of the highlights was an unusual sugar that sort of resembled brown sugar, but tasted much better. The cook (an American ex-pat who was a raising her daughter in Guatemala) said it was panela, and that it was sold in blocks. She grated it each morning so we could sprinkle it on the oatmeal.
Thus began my search for this elusive sweet.  I couldn't find it in San Marcos, the tiny town where we stayed.  We took the boat to Panajachel, the largest town on the lake,  where we roamed through an enormous labyrinthian outdoor and indoor market, asking for it at each likely stall.
Most times, the vendor had no idea what we were talking about.  After what seemed like hours of trudging through the very hot market and coming up empty, I was about to give up.  Then, under a canopy of yellow plastic, I found it -- a big brown block of delicious sugar.  I bought it immediately.
According to Wikipedia, panela is an unrefined food product found in Central and South America, and is basically a solid piece of sucrose and fructose obtained from the boiling and evaporation of sugarcane juice.  The panela I purchased (pictured at top) looks quite unrefined -- like is that a piece of straw embedded in the sugar?
So I've had my prized panela for more than a year and haven't used it yet.  Maybe it lost its cachet.  A few months ago, I was telling a colleague (a South American native) about my difficult search for panela through the markets of Guatemala.
"Panela?" she said. "You can get it at the Fine Fare on Clinton Street!"
Sure enough, panela is on the shelves of the supermarket around the corner from my office. 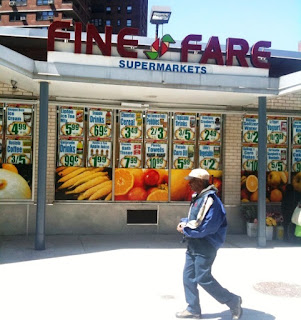