Of course it's good; it's my MOTHER'S! 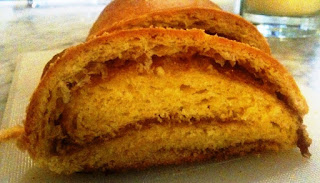 We're talking about kuchen here (German for cake), specifically the recipe pressed into my hand by one Ron Gordon, a colleague's husband, when I saw him at Henry Street Settlement's recent Art Show gala.

The ringing endorsement (see headline above) was Ron's enthusiastic response to my innocent enough (I thought) query: Is it good? 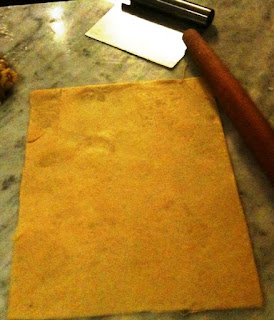 It is good, but it takes practice.  The first time I tried it, I made three near-fatal errors: I rolled it out too thin (see above), I didn't let it rise nearly long enough (though I followed the directions exactly) and I didn't bake it long enough (see "flattened" result below).  Luckily, I had some leftover dough, so the next day, I formed another loaf, let it rise overnight and popped it in the oven about 6 a.m. About 30 minutes and two cups of coffee later -- success. The kuchen was just right. 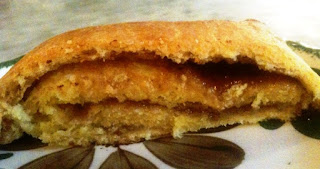 What intrigued me about this recipe is that it came with a "template," a small piece rectangular of paper folded very precisely, which Ron told me to use as a guide when folding the dough to form the kuchen.  It took me a while (luckily, the dough is very forgiving), but finally mastered the folding. 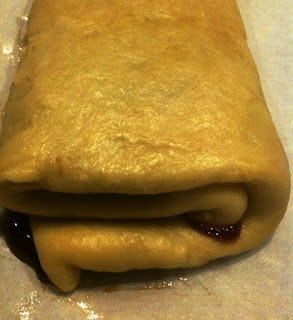 Ron reported that it tasted just as he remembered ("You've brought back lots of good memories," he wrote), and that his mother would be happy to know that her recipe lives on.

This is more of  a breakfast bread than a cake, and I've since learned that this is just one of many types of kuchen, all derived from recipes brought overseas by Germans and popular wherever Germans settled. In fact, kuchen is the official state dessert of South Dakota (see picture and recipe below), and other types of kuchen are found in bakeries in Chile, a sweet legacy of the mid-19th century German immigration there. 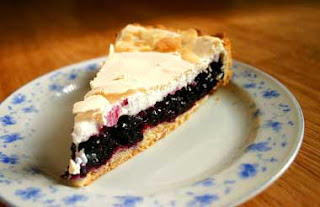 Thin Crust---Thick Custard Kuchen*
1 roll sweet roll dough---Thaw and spread in pan.  Use jelly roll pan for thinner crust, a 10x14 pan for thicker crust.  (Dough and custard may be divided into 2 portions and deep-dish pie plates used if round kuchen are desired.)  Spread up sides of pan.  Let rise.
Mix together in microwaveable bowl.  Microwave 5-8 minutes until thick, stirring as it begins to thicken.
Add favorite fruit filling on crust (canned cherry or blueberry pie filling, prunes, peaches, raisins, etc.)
Pour custard on top of fruit and sprinkle with cinnamon.  Add chopped nuts, if desired.
Bake at 350 degrees for 25-30 minutes or until crust is golden brown.
*Submitted by Wanda Jundt.  This is very good, very easy, and is a modern version of kuchen, bypassing some time-consuming steps.
Posted by Susan at 1:27 PM