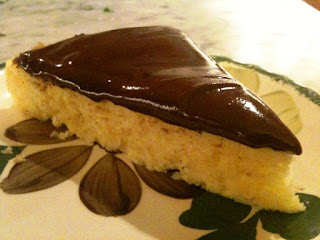 Well, five minutes is a *bit* of an exaggeration, but I did throw a cake together pretty quickly last night.  And like most things in life, the result reflected the effort.  Enough said.

My DD (dear daughter) had stopped by for dinner (in between her yoga and Bollywood dance commitments) and after a feast of farmer's market bounty -- roasted asparagus, salad of spring greens and flounder with lemon butter sauce --  she was dismayed to discover that there was nothing for dessert.

Ever the accommodating and sugar-addicted mother, I found a recipe that seemed quick and easy, albeit from the 19th century.   It is called "Altogether Cake," and was written in pencil, on a blank page at the end of Common Sense in the Household, A Manuel of Practical Housewifery published in 1884. 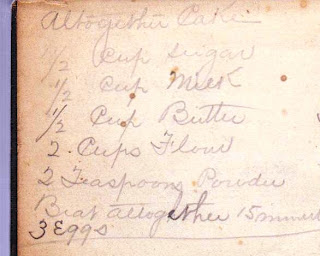 Like most recipes in this book (kindly lent to me by historic gastronomist and fellow blogger Sarah Lohman), the instructions are minimal.  Still, what's easier than throwing everything in the mixer and letting it rip?  I followed the recipe exactly except that I added some vanilla for flavor and salt because it's usually in cake recipes and wasn't in this one.

The butter should have been softer (if anyone knows the secret to softening butter quickly, please tell me) but I was rushed, and I probably mixed it too long to compensate for its hardness. Those Kitchen Aid mixers are powerful, especially compared to the human arm, which probably originally *powered* a rotary beater or whisk for this recipe.

What emerged from the baking pan resembled a moon crater or wheel of swiss cheese more than a cake, but after it was frosted (melted chocolate, confectioner's sugar, vanilla and heavy cream, mixed together in that order) it looked just fine. 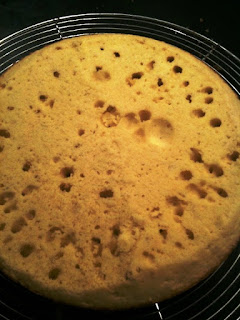 DD, anxious to get home, didn't want to wait until the cake cooled, so we simply frosted it shortly after taking it from the oven.  And within five minutes (no exaggeration this time), with the help of DH, we had consumed more than half of it.
Posted by Susan at 10:33 PM