Ma's Pie Crust (Or Apple Pie and the Jewish Immigrant) 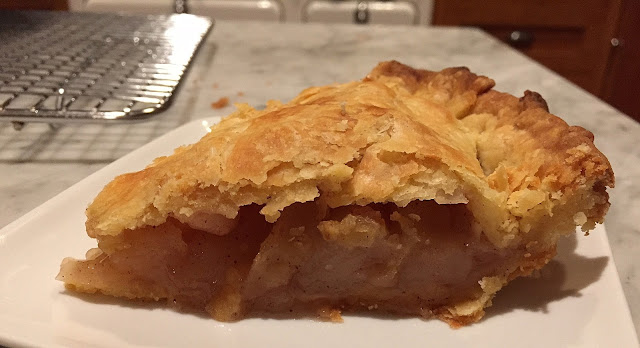 One of the stupidest stock phrases has to be "Do something every day that scares you." I mean who wants to live like that and, furthermore, who has so many fears that they need to tackle one each day? Having said that, I do have a fear of piecrusts but, at the behest of my friend Hanna, I agreed to demonstrate apple pie making at next Sunday's Generation to Generation Festival at the Museum of Eldridge Street. Actually, I agreed to teach a cooking class that might have been led by a settlement house worker for new American immigrants, c. 1900. The apple pie was Hanna's suggestion.

But this isn't just any pie crust recipe -- it belonged to Hanna's grandmother Rebecca Simansky, a Lithuanian immigrant who baked old and new world recipes. Bubbie passed it on to her daughter Bessie Griff. As a child, Hanna recalls apple pie for breakfast at her bubbie's house in Portland, Maine, and her mother made a pie almost every week at her home in Waltham, Massachusetts. At some point, Bessie began substituting fruit juice for the water in the recipe, a tradition carried on by Hanna. This recipe is well traveled: Hanna has made it in France, Seattle, Indiana and New York.

I practiced Ma's Pie Crust last week. This is the simplest pie crust ever -- it's nearly foolproof and it tastes pretty darn good. It can also be made in five minutes. I have a lot of oil-based pie crust recipes in my vintage recipe collection, but was always afraid to try them because it didn't seem like they would work. (Hmm...another "fear" conquered!) It eliminates the work (and guesswork) of traditional pie crusts, in which cold fat is cut into butter by hand or machine with water added until it is "the right consistency."

A supervised five-year-old can make this. Start by mixing flour and salt in one bowl, and oil and orange juice in another. Whisk the liquid ingredients until creamy and pour into the dry ingredients. 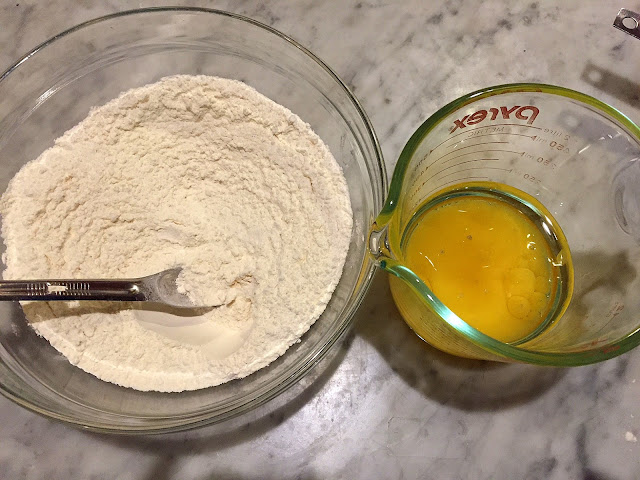 Combine using a fork. I also used my gloved hands to mush it together. 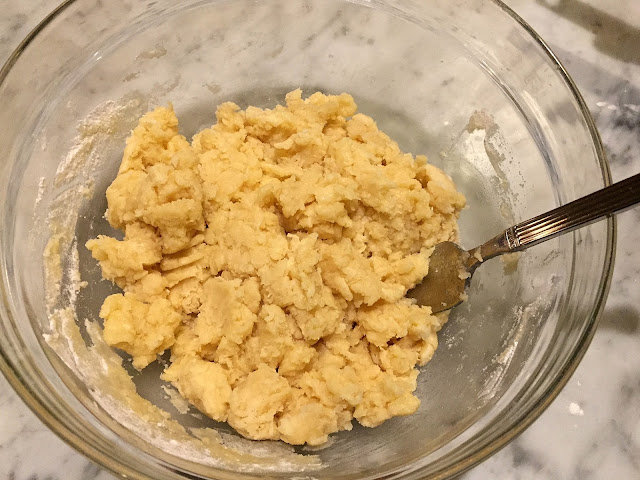 Divide the dough in half, form a circle and wrap in plastic wrap. Refrigerate for about 20 minutes. 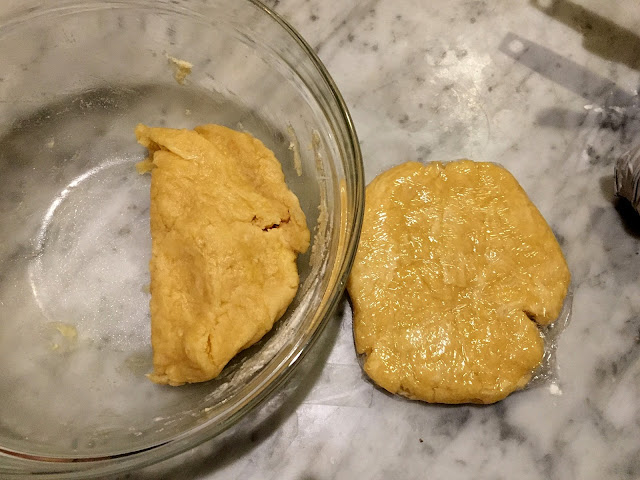 Roll out the dough between two sheets of wax paper or plastic wrap. 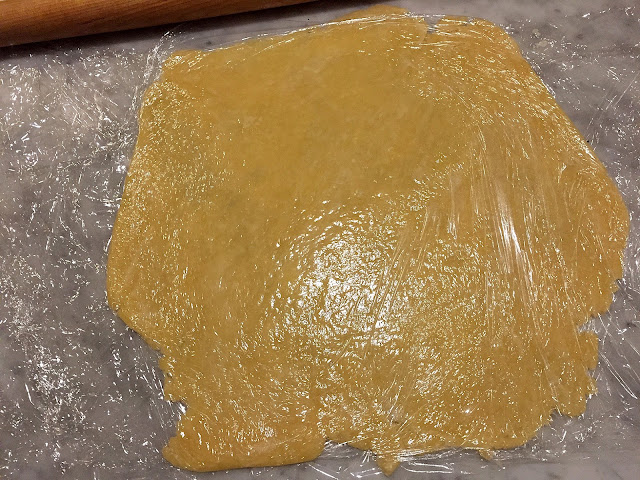 I always put the pie plate on top of the dough to check for size. 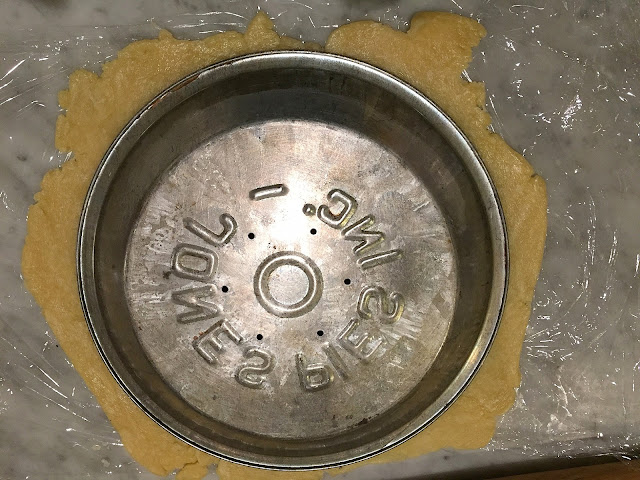 While the dough is chilling, make the filling. I created a recipe (written below) based a number of old-time apple pie fillings, using flour as the thickener.  Peel about five large apples. 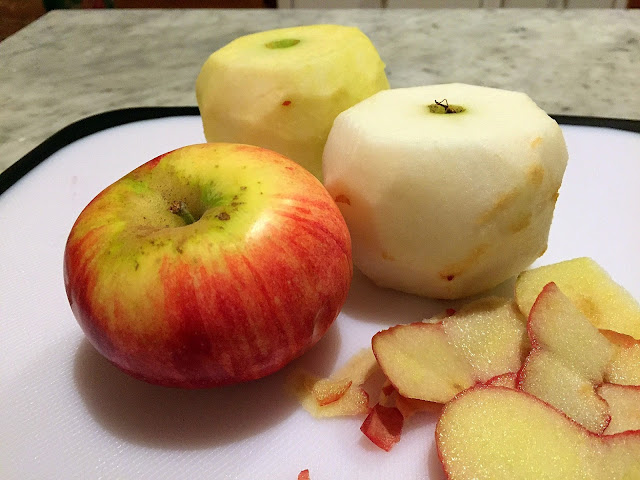 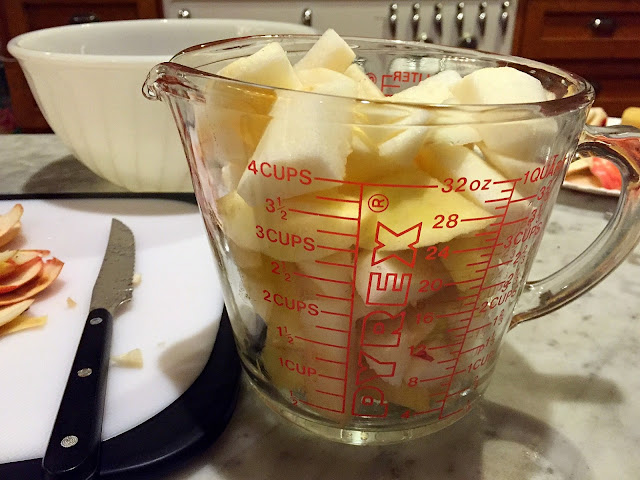 Mix with flour and cinnamon. 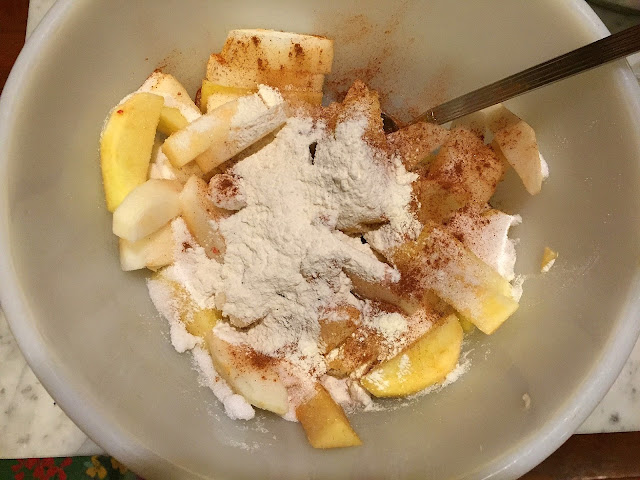 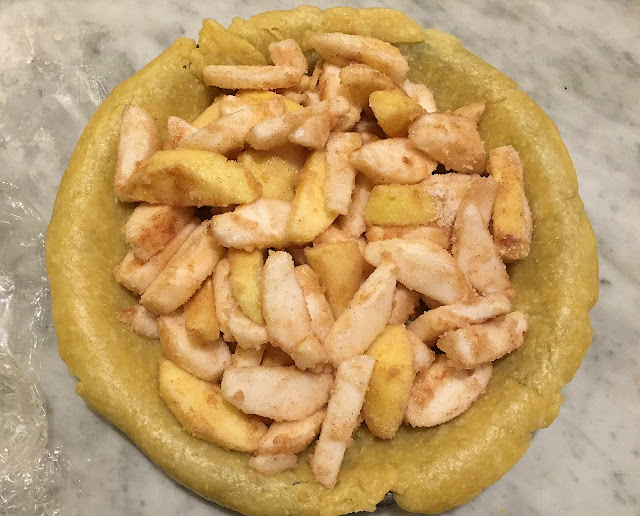 Top with the other crust that you've rolled out. Crimp edges and puncture the top so that air can escape during baking. 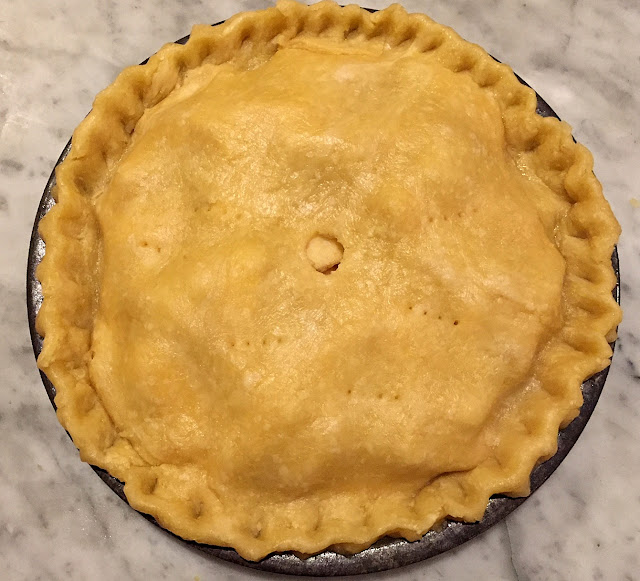 Bake for about 40 minutes. Cool on a rack. 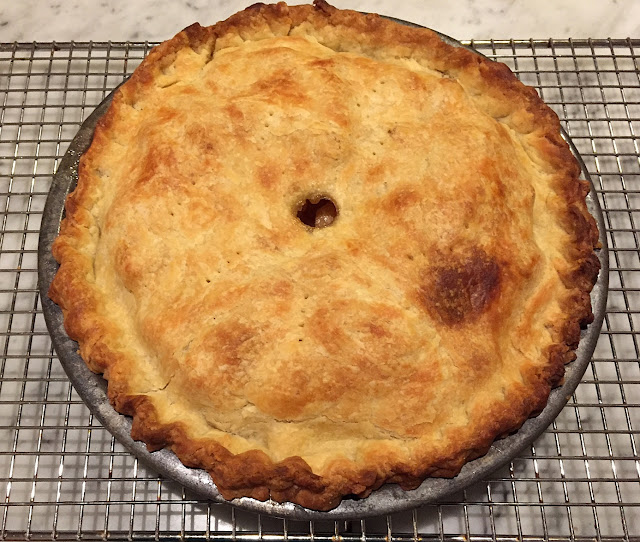 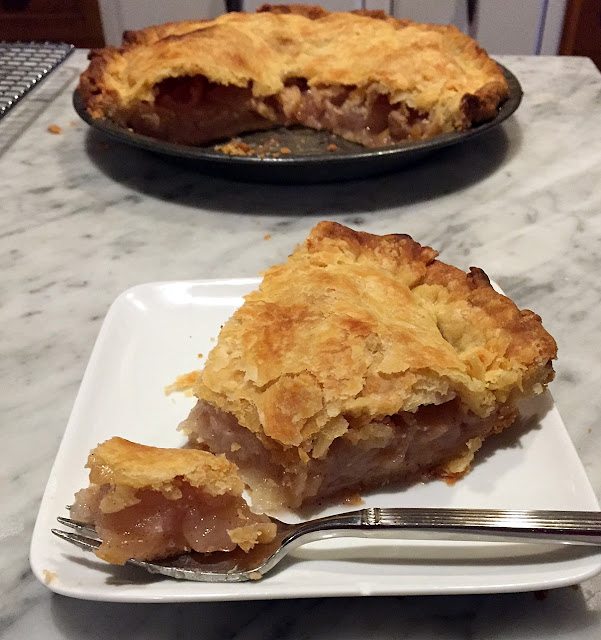 Hanna's mother created the original written recipe by following her own mother as she baked, trying to get the measurements correct, as Bubbie never measured anything. Hanna's original recipe card is below. Notice the word "ensemble," which puzzled me until Hanna explained that she had written it en route to Nantes, France, to study. While there, she lived with a family whose little son was so taken with her apple pies that he begged her to open an American bakery! 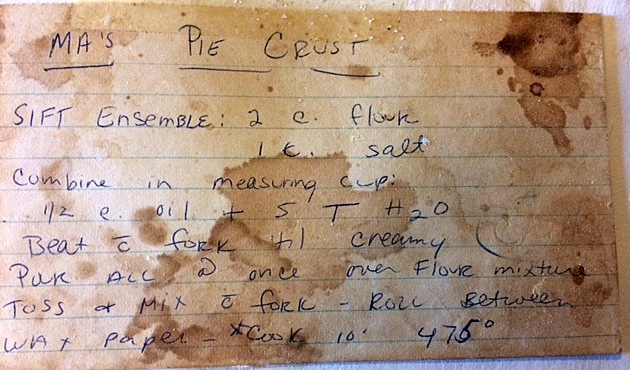 Concerned I wouldn't be able to read the card, Hanna provided the following typed "translation," which I followed exactly except for baking the bottom crust first. I also divided the dough before chilling.

Combine in measuring cup:  1/2 c.  oil, 5 T cold water (I use cold orange juice).  Beat with fork until creamy and pour all at once over flour mixture.  Toss and mix with fork.  Cover with wax paper and chill for 20 minutes.

Put dough in between 2 pieces of wax paper and roll out for piecrust.  Cook bottom crust for 10 minutes at 475.

Core, peel and slice apples. Place in a bowl and sprinkle with lemon juice to prevent discoloration.
Add sugar (amount depends on sweetness of apples), flour and cinnamon.
Combine with apples until they are well coated.
Place in unbaked pie crust.
Cover with top crust, pinching sides.
With a fork, pierce the top crust in a few places.
Bake in preheated 375F oven for about 40 minutes.
Cool on rack.
*Pie filling is very forgiving.  You can make up your own, adding nutmeg, etc. or whatever.
Posted by Susan at 9:31 AM