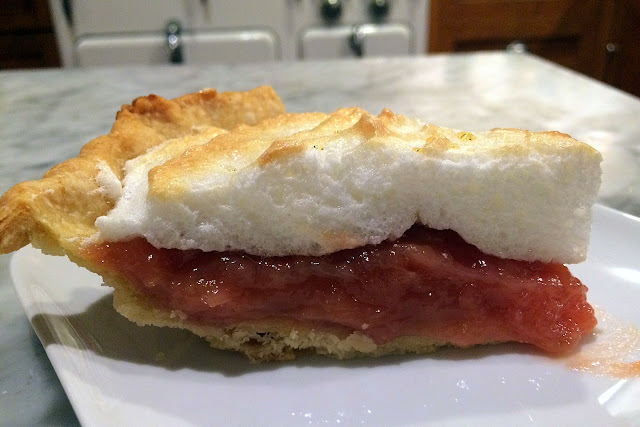 Just when I was thinking that there was nothing new under the spring sun for rhubarb desserts, I encountered this wonderful vintage recipe. Unlike most rhubarb pie recipes, where the rhubarb remains chunky, this creates a smooth filling (think applesauce, only with rhubarb). The filling is cooked first, then poured into a baked pie crust.

It is a very, very delicious pie, with the sweet and tart flavors characteristic of rhubarb. It's not hard to prepare, but not super easy, either. But so worth it, especially for its novelty. Even though I ruined the meringue, it still worked. (Hint: Don't try to wing this, and use a recipe instead, If you follow a recipe and don't overbeat the meringue as I did, you will have a much better looking pie.)

Let's get started. The rhubarb I used was purchased at the Ann Arbor Farmer's Market (couldn't resist the ruby red stalks) and flown back in my carry on luggage. 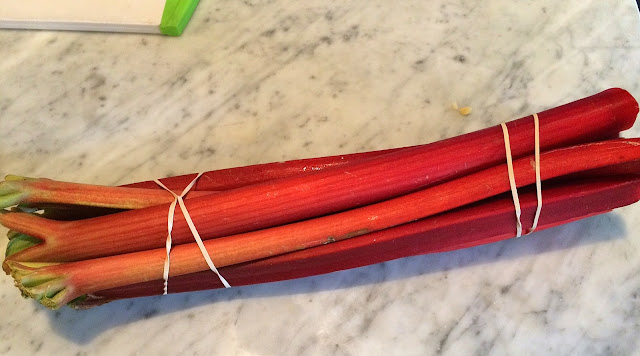 Cut the rhubarb into small pieces. You'll only need two cups, which was about three very large stalks. 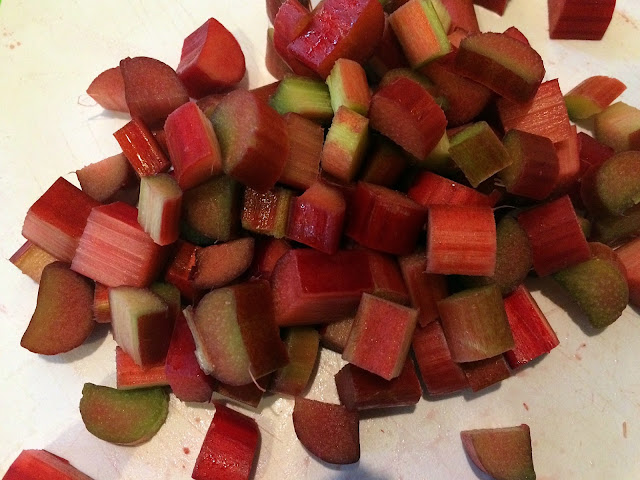 Place the rhubarb in a two-quart (or medium size) saucepan, add sugar and butter. Cover and cook for about ten minutes, until the rhubarb chunks disappear. 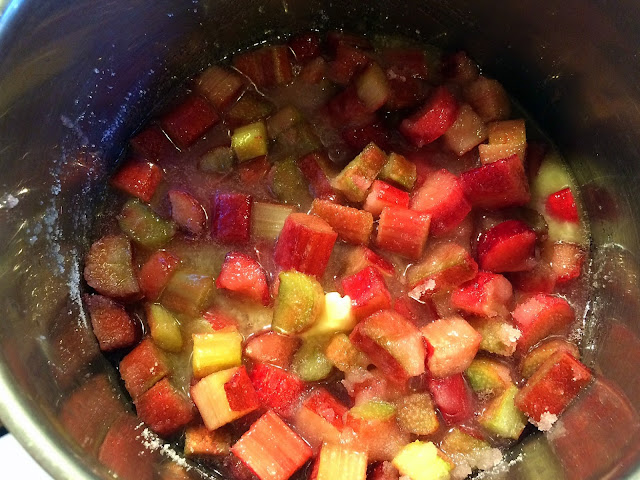 Mix up the filling sauce -- egg yolks (reserve the white for the meringue), cornstarch, sugar, salt and heavy cream. Temper it (warm it up) by adding some of the hot rhubarb liquid to it before pouring it in the saucepan to prevent scrambled eggs. 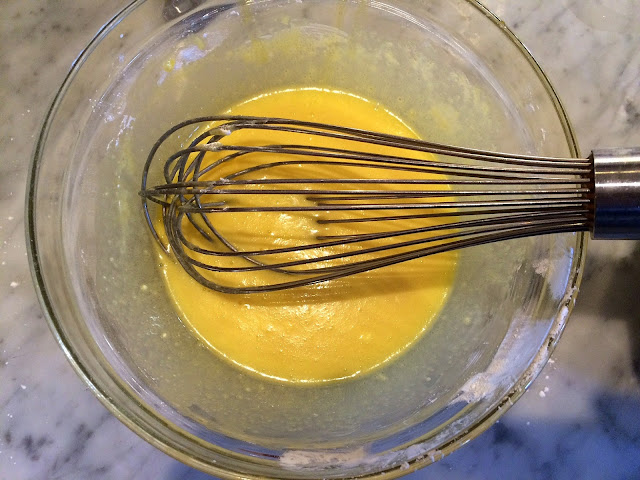 Cook this mixture until it's thick. 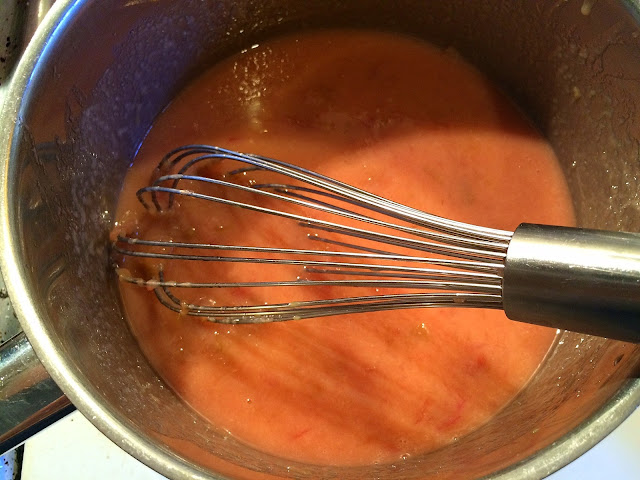 Before you start all of this, prepare and blind bake an eight- or nine-inch pie crust. (Recipe below.) 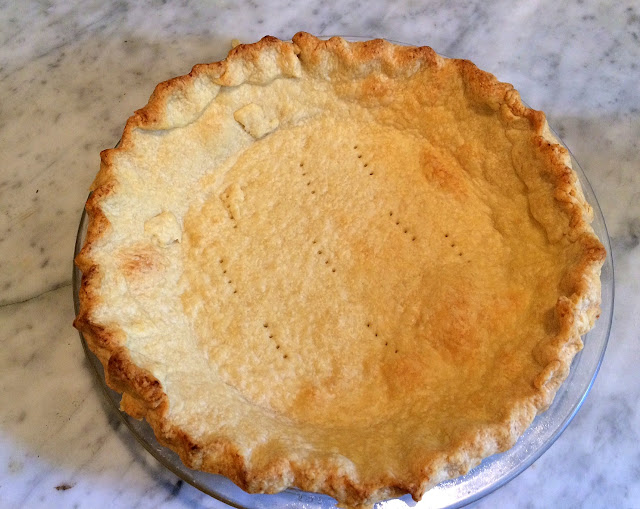 Pour the filling in the pie crust. It was not a super generous amount, typical of mid-20th century recipes, but with the meringue, it will fill out nicely. 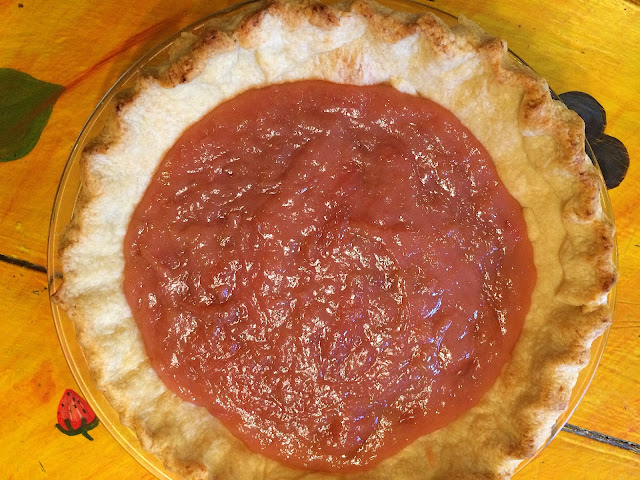 Make the meringue (the right way!) with the reserved egg whites and add on top of the filling. 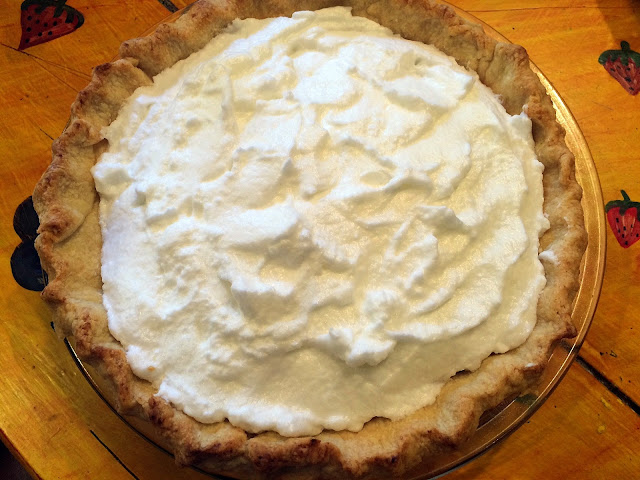 Bake about ten minutes in a 350 F oven to brown the top. 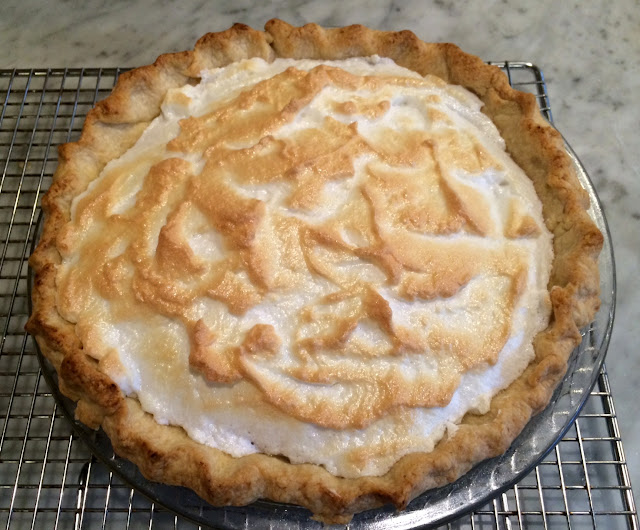 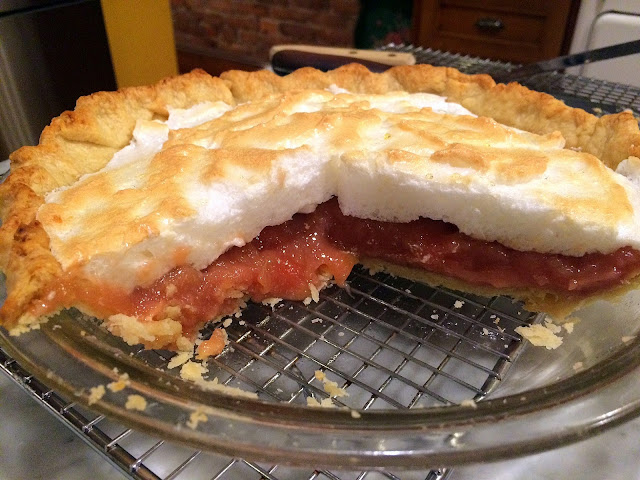 Production notes: I followed the recipe exactly, but have written it out since the card is a bit confusing. 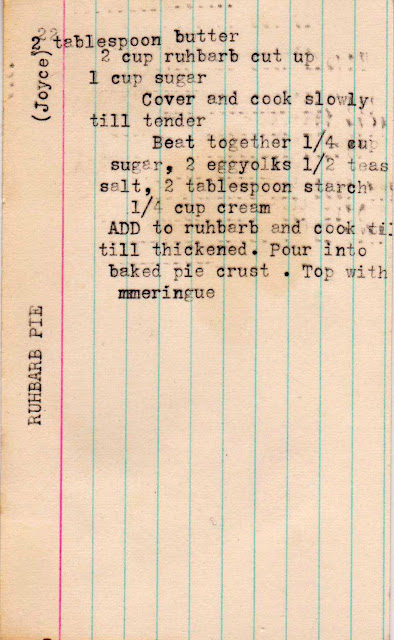 Place rhubarb, 1 c. sugar and butter in saucepan. Cover and cook until soft. The rhubarb will break down.
In a small bowl, combine egg yolks, 1/4 c. sugar, salt, cornstarch and heavy cream.  Whip to combine.
Add a few tablespoons of the hot rhubarb mixture to the cream mixture, and stir to combine.
Add the cream mixture to the saucepan while stirring.
Cook until thickened.
Pour into the pie crust.

Meringue
Make meringue with reserved egg whites. I screwed up the meringue, making it from memory, rushing as our dinner guest was ringing the doorbell! Look up a recipe to find a good one. One way to prevent overbeating the whites is to add a bit of cream of tartar to the mixture at the beginning, a step I skipped. Just be sure to seal the edges of the pie with the meringue to prevent weeping.

Bake the pie for ten to 12 minutes in a 350F oven, just to brown the meringue.

2 1/2 c. all-purpose flour
1 stick of cold butter, cut into small pieces
6 T. cold Crisco, cut into pieces
2 t. sugar
1 t. salt
3 - 6 T. cold water
Place dry ingredients in a food processor and whirl to blend.  Add butter and Crisco and process until it resembles cornmeal. Add the water, a couple of tablespoons at a time, through the feed tube, mixing just a second or two after each addition. Remove from the bowl directly into a plastic bag and smoosh it all together.
To blind bake it, roll out about half the dough into a circle and transfer into a pie plate. Crimp the edges.  (Reserve the other half for your next pie) I roll the dough between two sheets of plastic wrap. Keep the top layer of plastic wrap on the pie (I do this with Costco wrap) or line it with aluminum foil. Fill the center with pie weights of dry beans and bake in a 425 F oven for ten minutes.  Remove the lining and weights, prick the bottom with the tines of a fork and return to the oven for about ten minutes until it is lightly browned.
Note: If you have time, refrigerate the crust before baking for at least an hour to help retain the crimping on the edge.