In my last post about Pinwheel Cookies -- baked on a cookie sheet I took from Mayor Bill de Blasio's stoop giveaway -- I added a throwaway line about regretting not taking a "marijuana poster" that was among the stuffed animals, books and other detritus in front of his house.

Well, that caused a flurry of media (and social media) activity here in New York, giving new meaning to words "slow news day."  On the other hand, the mayor is new and anything he does is news, especially when he does something so "of the people" as putting out his unwanted items for others to take, a well-established practice in Brooklyn.

So last night, instead of lighting my oven, I did a bit of internet research and found a facsimile of the poster, pictured above. Turns out it's a 1942 movie poster for an anti-pot film, in the spirit of the classic Reefer Madness.  (See detective work below.)

Thanks to the DH for enlarging the photo taken at the stoop sale (left), and Crain's NY political reporter Andrew J. Hawkins (@andyjayhawk for creating this educational illustration. 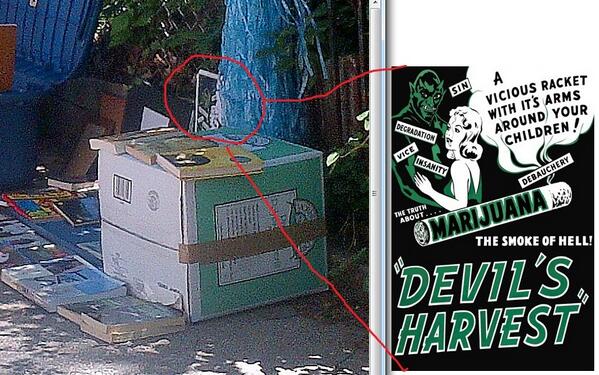 Now that that's out of everyone's system, I will return in a few days to the mission of  ACakeBakes, recreating desserts from hand-written recipe cards -- the material culture of housewives who baked in the early to mid 20th century.
Posted by Susan at 12:04 PM