The Biggest Loser (on eBay at least) 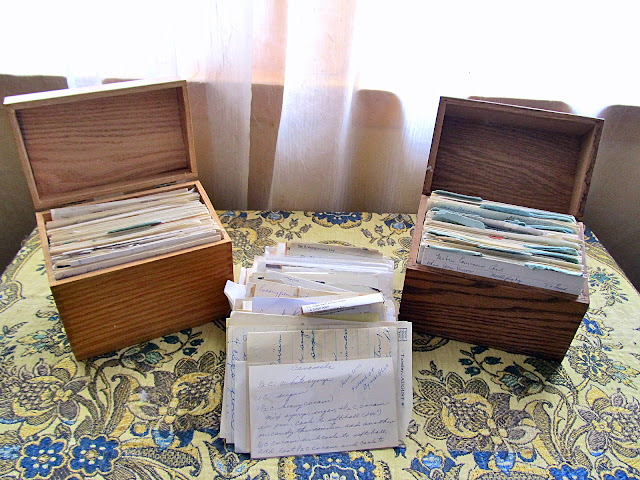 Would you bid $180.00 for three old recipe boxes?  Someone did tonight, on eBay.  My maximum bid was $89, and I thought that was crazy high.  I found out I lost the auction when I emerged from the subway after work. It was a fierce bidding war in the final moments, the drama unfolding while I was underground traveling from the Lower East Side to Park Slope.

I wonder: Who are these people and why do they want these boxes so much?  It used to be that boxes filled with hand-written recipes on eBay would sell for $10 or $20, or sometimes not at all.  Gone are the days I used to find them at flea markets and antique shops (or the junktique stores that I favor) for just a few dollars, so eBay is my only (and increasingly dwindling) option. While $180 sets a record, it's not unusual that the boxes command for $50 or $70 or more on eBay -- and it's a crap shoot as, unlike at a flea market, one can't really examine the contents.  I recently paid $28 for a box and it yielded --- drum roll here....just one worthwhile recipe (a one-step pound cake, which I'll make soon).

Granted, these recipe boxes are rare.  Who these days doesn't print recipes off the internet, from Epicurious and other sites?  My own modern recipe collection consists of these, stored in a file folder, kept for a while and then discarded when a newer version appears online.  So perhaps their value is couched in the notion that maintaining a recipe file box is a lost art and these are the last of a dying breed.

Maybe my competitors for these boxes are simply seeking what I am: A glimpse (and taste) of the past revealed in some wonderful combination of ingredients and method, a gem of a recipe that somehow was lost to time.

Nostalgia is a powerful sentiment -- so many of us think the past was/is better, that Grandma did it right.  Kind of  like "the grass is always greener" across time and not space.  Woody Allen's recent film Midnight in Paris tried to debunk that thought process.  When the movie's main character got his wish to live in the Paris of the 1920s -- his idea of perfection, he discovered that those living in the 1920s wished they were living in Le Belle Epoque, the Paris of the 1890s.
Posted by Susan at 11:09 PM