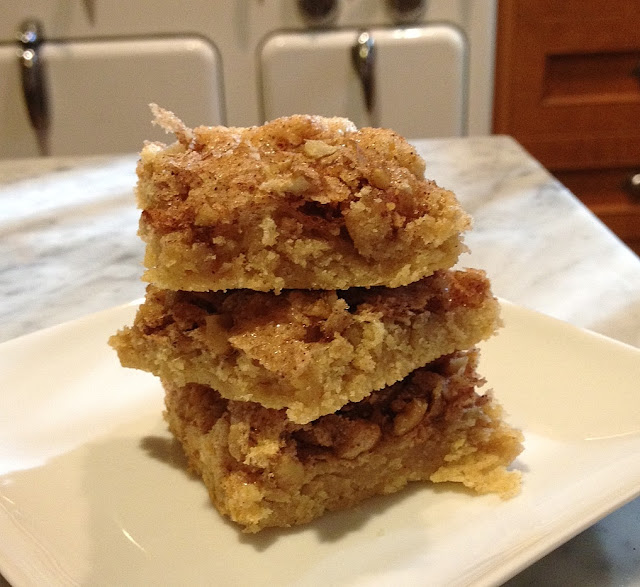 Last night, as I was reluctantly cutting vegetables for my 15th salad this week (can anyone say Weight Watchers?), I was suddenly overtaken by the mantra: Stop the Madness!  Always one to listen to reason, I immediately put down my knife, and got to baking.  The result? These insanely delicious bar cookies, so good that my tasters here at work couldn't get enough of them.  (In fact, Ryan had three!)

Cinnamon Crunches (from Duckworth, according to the vintage recipe card) are the perfect treat when you're overcome at 10:30 p.m. with a desire to bake but not with the desire to go to the store for ingredients.  These call for common ingredients that most of us have in our kitchen:  eggs, milk, butter, flour, salt, cinnamon, vanilla and nuts. 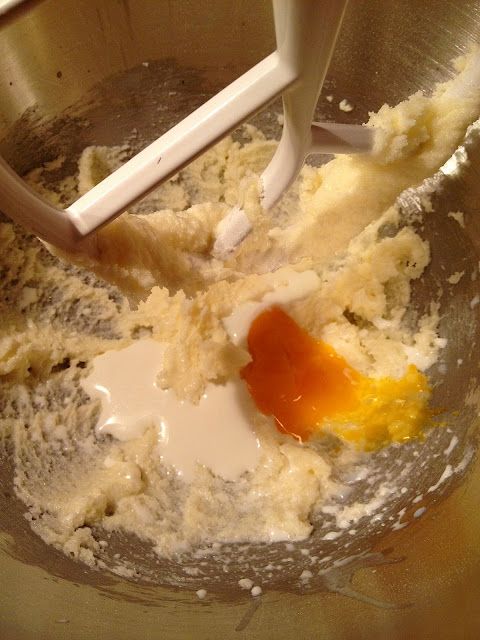 Cinnamon Crunches are not a confection where all the ingredients are simply dumped in a bowl.  It requires making the bottom layer, and then pressing it into a baking pan.  The top layer is made by whipping an egg white, spreading it on the crust and topping it with a cinnamon-sugar-nut mixture. The extra work pays off nicely: Cinnamon Crunches are way more than the sum of their parts.  They are sweet, buttery, crunchy (from the top layer) and several people guessed apple was an ingredient. 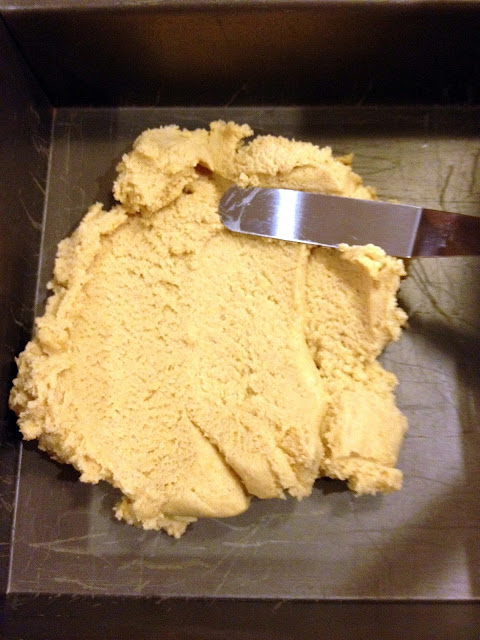 Putting the bottom crust together is easy.  Just cream butter and sugar, and add an egg yolk, milk and vanilla. Mix in the dry ingredients (flour, salt and cinnamon) until well combined.  Press into the pan, or use  an offset spatula until the mixture covers the bottom completely. 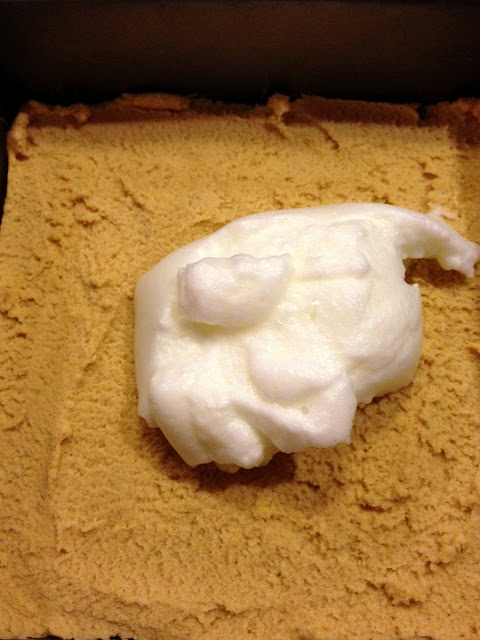 Don't make the mistake I did and overbeat the egg white. (Pay attention, or add a pinch of cream of tartar during the beating.)  Even though it was dry, it was still spreadable, sort of. (See below.) 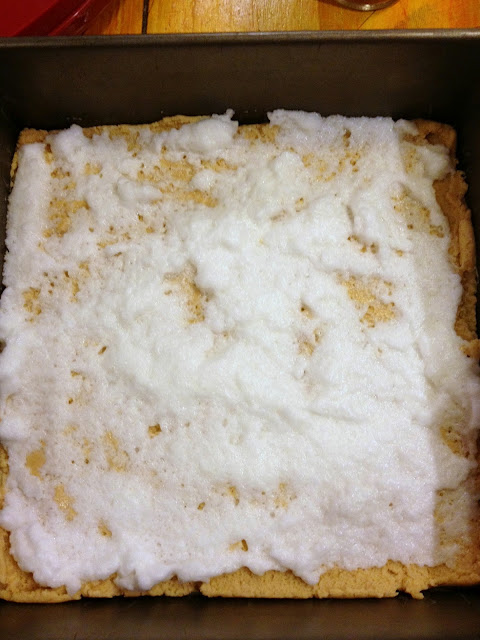 Sprinkle the sugar-cinnamon-nut mixture on the egg white and bake for 30 minutes. 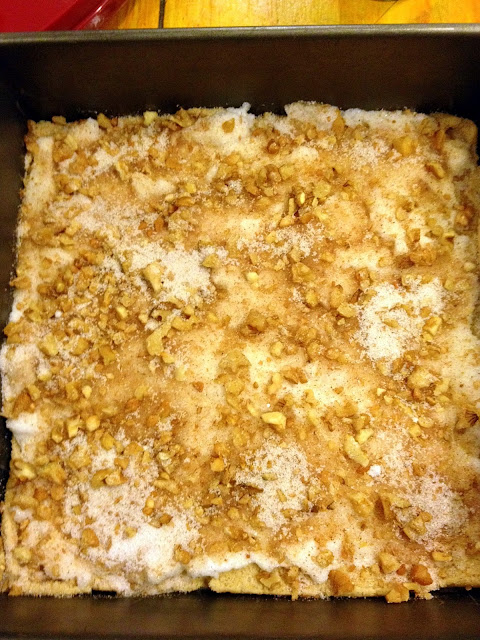 These are very easy to transport, i.e., get out of the house, lest one be tempted to sabotage their Weight Watcher's efforts. 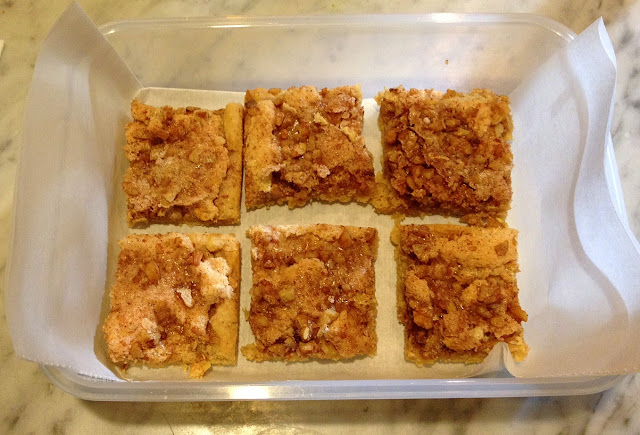 Some production notes:
This is an old recipe, calling for a 7 x 11 inch pan.  This size is no longer in use (don't know why), so I used an 8 x 8 square pan.  A 9 x 9 pan would also work beautifully.  As always, I substituted butter for shortening.  Sorry Duckworth. 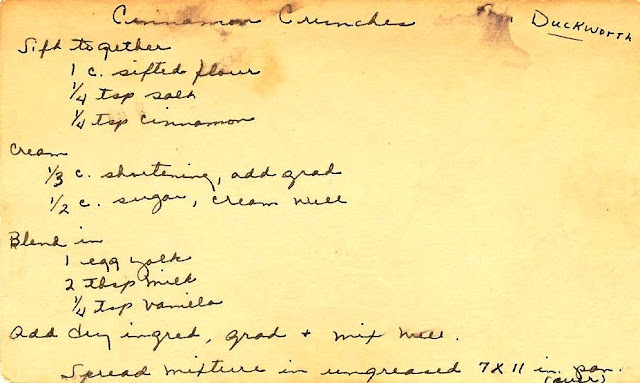 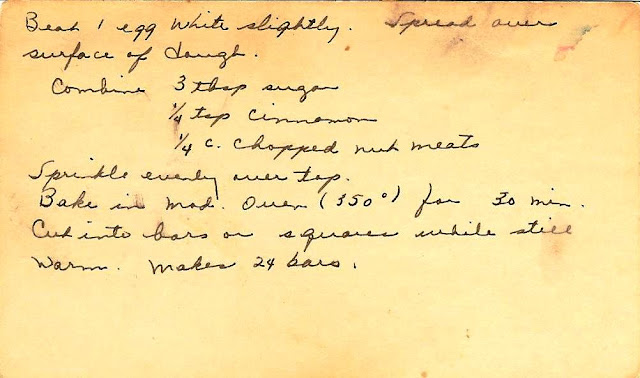 And I did finish the salad -- while the Cinnamon Crunches were in the oven. 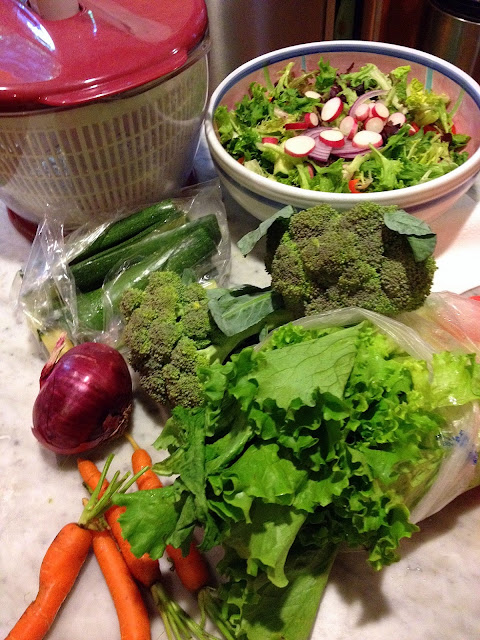 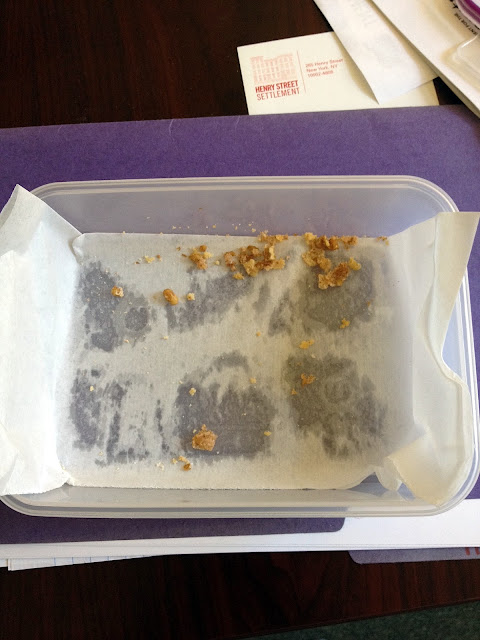